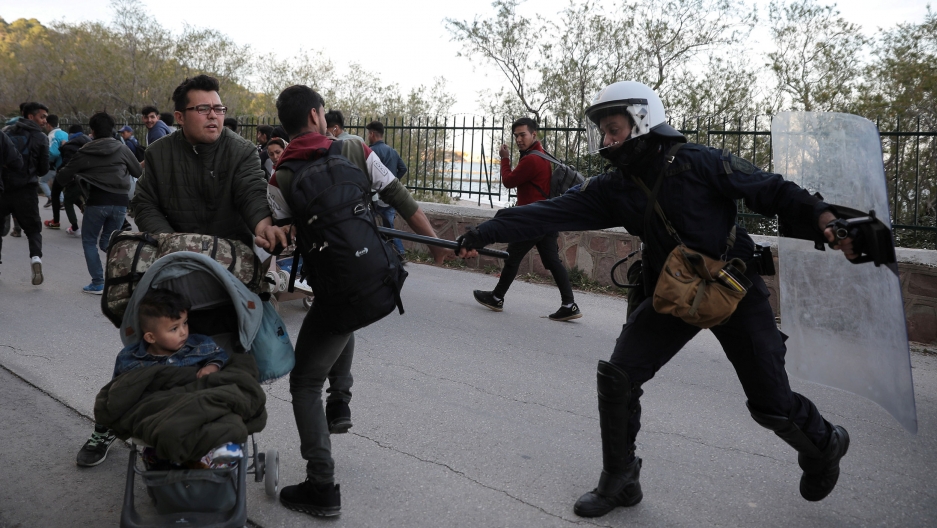 A riot police officer hits a migrant with his baton as police tries to disperse a group of migrants outside the port of Mytilene, Greece, March 3, 2020.

Refugee camps on the Greek island of Lesbos already house tens of thousands of refugees and asylum-seekers. Conditions are cramped and squalid. Still, thousands more migrants are trying to get in.

Some 10,000 migrants have tried to cross into Greece by land in recent days and more than 1,000 have arrived by sea at Greek islands, creating fears of a repeat of the 2015-2016 migration crisis, when more than 1 million people crossed into Greece and 4,000 drowned in the Aegean Sea.

Since last week, Turkey has thrown open its frontiers with Greece and Bulgaria to allow migrants to enter the EU, a move apparently aimed at putting pressure on European countries to back it in Syria. Turkey is already home to 3.6 million Syrian refugees, and says it cannot take any more.

The Greek government is trying to expand refugee camps, but many Greek residents oppose such a move and violence has escalated this week.

Anna Benedictsson is a humanitarian aid worker who has been on Lesbos since August. She said while most people on the island oppose expanding refugee camps, the violence against migrants does not reflect the majority.

"The majority are rightfully protesting against the development, but can understand that this is not the refugees' fault," Benedictsson told The World's Marco Werman. She said a minority of right-wing protesters are targeting refugees and aid workers, and she's on lockdown in her apartment because of the violence outside.

"I think we all are in some sort of danger, without being alarmistic or dramatic," Benedictsson said. "We get reports daily from colleagues and other organizations who have either left the island or evacuated their offices. Even if this is a small group, a minority of the local community, it is [really] controlling the way we can work right now and move about in the city."

Marco Werman: Let's identify where all this started. It was last week that the Greek government started bringing in equipment to expand the refugee camps on Lesbos. I guess they're planning on housing thousands more refugees on the island. What was the response from locals last week?

Anna Benedictsson: So it began in a quite different situation last Tuesday where hundreds of riot police came to Lesbos to transport equipment for new detention centers. And this was met with a lot of protest from the local community. Protests against the management of the situation, so against the whole building and expanding of refugee camps for their own sake, but also for the refugees.

And then on Thursday, we heard the announcement from Turkey that they were opening the border between Turkey and Greece. How was that information received by locals?

So that's where the turn came, because the first protest — which also became pretty violent, but still was a pretty rightful reaction from the local community and much supported by NGOs and the refugee community — from Thursday night from the Turkish announcement on the borders opening to Europe. There was another part of the local community that started reacting, more far-right groups.

Related: Turkey says it will no longer stop refugees from reaching Europe amid escalating Syrian war

And how did they react? I mean, what's their attitude toward the refugees?

It's been very hostile and it's been violence, not only against the refugee communities and new arrivals, but also against the humanitarian workers who are here on the island — big and small actors.

You've been to some of these camps. You've seen them. What are they like?

So Moria refugee camp is huge. At the moment it's supposed to house at the absolute maximum 3,000 people. And right now, it's 21,000 people in there. The living conditions inside Moria are absolutely horrible. You have some 13,000-15000 living in and summer tents all around Moria, so outside the actual camp, called the Olive Grove, so fragile summer tents, which are not at all equipped for permanent living, or yet alone winter temperatures and heavy rain. So a lot of extremely vulnerable people living there. People who've fled war and violence and survivors of torture, rape. The situation is already in very, very overwhelmingly bad for these people.

Related: As Turkey opens border, conditions for migrants in Europe are 'unacceptable'

So the focus kind of right now is on the Greek and Turkish border. Greece and Turkey — their history is one of perennial conflict and reconciliation. On Lesbos, are you feeling any of that right now? I mean, are people, are residents there angrier with the Turks or are they angrier with the refugees?

I would say that the narrative right now, it's portrayed as if the Lesbos community is hostile against refugees as such. But my experience throughout the years that I've spent here, since 2018, couple of months back-and-forth, is that the Lesbos community has a history of being very friendly against people traveling between, over this Agean water, welcoming and tolerant and understanding.