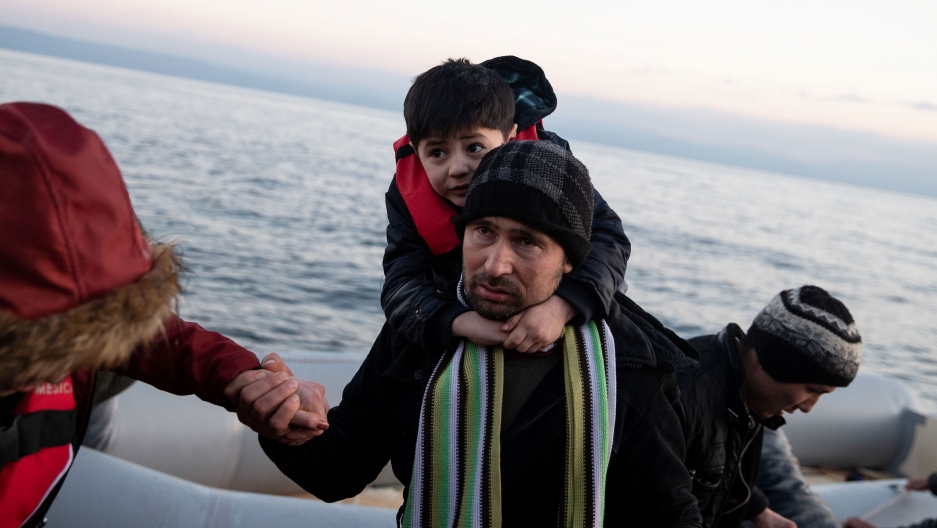 A man carries his son as migrants from Afghanistan arrive on a dinghy on a beach near the village of Skala Sikamias, after crossing part of the Aegean Sea from Turkey to the island of Lesbos, Greece, March 2, 2020.

A young Syrian boy died on Monday after being pulled from the sea when a boat capsized off the Greek island of Lesbos, Greek officials said, the first reported fatality since Turkey opened its border last week to let migrants reach Europe.

Related: What's next after the US and Taliban sign peace deal?

More than 10,000 migrants, mostly from Syria, other Middle Eastern states and Afghanistan, have reached Turkey's land borders with EU states Greece and Bulgaria since Ankara said last Thursday it would stop keeping them on its territory.

Greek and Turkish police have fired tear gas into crowds caught in the no-man's land between the two borders, reviving memories of the 2015-16 refugee crisis, when more than a million people arrived in Europe from Turkey.

Related: Turkey says it will no longer stop refugees from reaching Europe amid escalating Syrian war

"We have children four days without food," one man shouted from behind a wall of barbed wire near the Kastanies border post as Greek riot police stood ready to repel any breaches of the frontier. Nearby soldiers unrolled more coils of barbed wire.

Turkish President Recep Tayyip Erdoğan told Europe it must share the "burden" of the crisis. "I already warned Europe," he said.

Devon Cone is the senior advocate for women and girls at Refugees International, an advocacy organization, and was in Greece recently. She spoke with The World's Marco Werman about the difficulty of the situtation on the ground.

Marco Werman: Today, a boat capsized in Lesbos. There's been one official death confirmed so far — a child. Do you think there will be more cases like this? Will we see a repeat of 2015 and 2016 with fatal sea crossings by asylum seekers?

Devon Cone: I do think that Turkey has a lot of power over this situation, and it is a dangerous sea crossing. Most of the refugees and asylum seekers that I've spoken to over the years, since I've both traveled there recently with Refugees International, and also worked there before —  most of them don't know how to swim. Most of them are terrified of the journey. And while it's a short crossing from Turkey to Greece, in most places, it's not a safe one. And smugglers certainly don't prioritize asylum-seekers safety.

How do you think Greece is handling the situation? Because this is kind of the test. They're the first one to receive these asylum-seekers now.

Greece already, you know, is completely overwhelmed. On the islands, particularly the islands of Lesbos, Chios, and Samos, where I visited, the capacity that Greece has to host, to accommodate, and feed, and provide basic necessities for asylum-seekers is over-capacity by more than, well, almost 800%.

Related: The world must step up to save Syrians displaced from Idlib

So Greece — obviously over-capacity. Do you think they're doing enough even in the situation that they find themselves in?

No, I definitely don't think they're doing enough. Certainly they find themselves in a very difficult situation. We've seen it even this last weekend. There has been a lot of violence and clashes between local residents of the islands that are hosting the refugees and asylum-seekers and Greek government riot units. The country is dealing with a real challenge, but a challenge that can be met, and can be met in an organized, dignified fashion, but needs more help from the EU.

So the EU, you found in your report, provided over $2 billion for refugee supports. I'm wondering, if these camps are still overcrowded, why?

That's a really good question. Throughout my research, a lot of what I did was speak to the NGOs and staff that are working on the ground directly with refugees and asylum-seekers. I mean, at the end of the day, they're wondering the same thing: Where is that money and why are the conditions so terrible? And even according to the UN Refugee Agency, you know, these conditions are as bad as any other major humanitarian crisis in the world where they don't have the resources.

Related: This doctor treated hundreds in an underground hospital in Syria

How do you think the EU is viewing the situation as Greece struggles with these new arrivals?

I think the EU for the most part, while they've given money to Greece, they haven't stepped up in terms of responsibility sharing. And I think how they're viewing this is, they're both concerned, but also trying to keep the situation in Greece — and not [have it] affect them as much as it does Greece.

Afghans make up nearly 50% of the asylum-seekers in Greece. You were speaking with some Afghan women recently when you were on those Greek islands. What did you learn?

Many of the women I spoke to were elderly Afghan women who really don't remember or know anything about Afghanistan. What they do know is that it's not safe and that they fled for their lives. The situation in Afghanistan is not getting better despite new political deals that are being made. I mean, it's still quite unsafe. Even if they were to return to Afghanistan, they don't know what they're returning to. What's really important to note is that for all asylum-seekers of all nationalities in Greece, they are living — especially the ones on the islands — are living in really filthy, squalid, unsafe conditions, which is — given the fact that it's Europe, and Europe has the resources — it's really quite unacceptable.