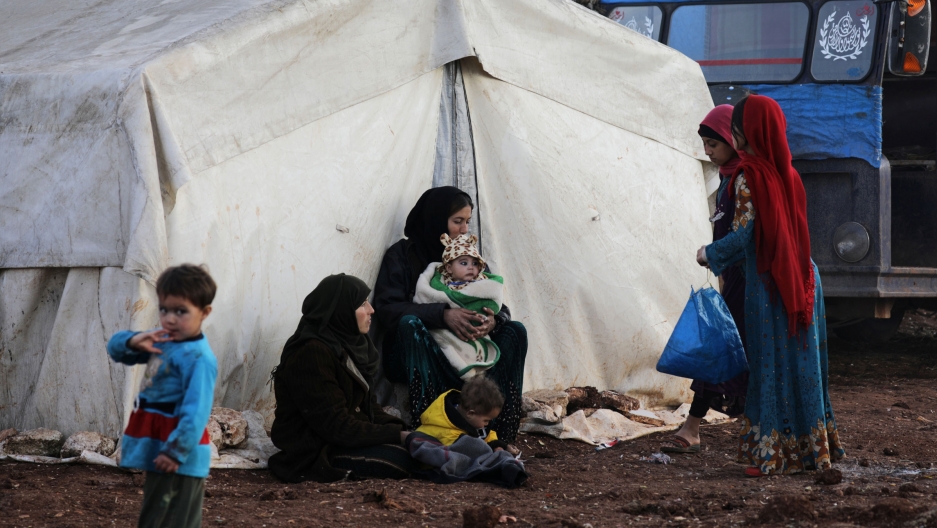 The walls are closing in on the three million residents of Idlib, the last pocket under the control of Syria's armed opposition. The ongoing Syrian regime campaign in the country's northwest has displaced nearly 1 million people since Dec. 1, 2019, all fleeing north toward the Turkish border, which is manned by border police who shoot and kill, capture and deport those attempting to escape Syria.

The massive flight of civilians stems from intense airstrikes and shelling carried out by Russia and the Syrian regime, as well as rapid advances on the ground of the Syrian Army and pro-Iranian militias. Since the start of the offensive in late April 2019, the rebels have lost about 40% of the territory under their control. The regime's rapid advances stem from Russia’s overwhelming firepower — but are also due to high levels of attrition in rebel ranks, the collapse of defensive lines, and the inability to quickly erect new ones. There's a widespread belief among civilians that resistance is futile, and therefore, fleeing rather than resisting is a better option.

Turkey is greatly alarmed by this mass plight towards its border. It fears the influx of additional refugees, after already hosting 3.6 million Syrians. Yet halting the regime’s advance requires an escalation in the use of force, which could pit it against Russia, the regime’s main backer.

Related: Idlib in northwest Syria is under attack from Russian and Syrian jets. Here's what one resident told us.

Even if Turkey manages to compel Russia and the Syrian regime to halt the offensive, the displacement and humanitarian crises in Idlib will not end. Similar to millions of refugees living outside of Syria, fleeing residents of Idlib largely do not feel safe to return to their homes in towns controlled by the regime. A recent snap poll conducted by the Syrian Association for Citizens’ Dignity among the displaced from the latest offensive found that 90.6% of them would not consider returning to live under regime control. A majority of the population in Idlib is now displaced from their homes. The regime perceives residents of Idlib in general, and those who flee its forces in particular, as disloyal.

Idlib residents' fear is well-founded. Even among the few civilians who remained behind in towns recaptured by the regime — who believed they did not have a reason to fear the regime because they had no connection to anti-regime activities — many have been executed, their bodies mutilated, or arrested, humiliated and tortured. In areas previously held by the opposition that reverted to government control, the regime has arrested civilians and tortured them to death, even after “clearing their status” with the regime.

Related: This doctor treated hundreds in an underground hospital in Syria known as The Cave

“I am not thinking of going back. At any moment the regime can arrest me or humiliate me,” said Mahmoud, who asked his real name not be used, from Maarat al-Numan, a town in Idlib, who now lives in Efrin, northern Aleppo. “This applies to even state employees like myself, with no connection to anything [anti-regime].” Mahmoud explained “the regime that is returning to Idlib is not with one head. There are many people with influence who can arrest people for nothing, whether they are state employees or not.”

The fate of Idlib is now in the hands of Turkish President Recep Tayyip Erdogan and Russian President Vladimir Putin, who are negotiating its future. Turkey has grown closer to Russia in recent years and has given up on its desire to see Syrian President Bashar al-Assad's regime toppled. But preserving Idlib out of Assad’s hands is crucial for Ankara, which fears being flooded by additional refugees. If regime forces continue advancing toward the border, desperate Syrians may risk the prospect of being mowed down by Turkish border guards and may attempt to storm Turkey to seek shelter there.

Since early February, Turkey significantly increased its military presence in Idlib, authorized under the Astana agreement it reached with Russia in 2017 concerning the establishment of a de-escalation zone in the area. That agreement has since collapsed, with the start of the regime’s offensive. Thus far, Turkey’s forces in Idlib have exchanged fire occasionally with Assad’s forces, attempting to avoid a wider confrontation with Russia.

The prospect of a war between two major powers on Syrian soil has never been higher, despite the precautions both sides have taken thus far. Negotiations between the two powers have not yielded any results: Russia is refusing to halt the offensive, while for Turkey, even the current situation is untenable and it is publicly demanding the regime withdraw to the pre-April 2019 lines. The shrinking of the rebel-held territory and displacement of its people means a greater share of the population is living on the border, utterly dependent on aid, constantly seeking ways to escape their misery and insecurity by crossing into Turkey.

Turkey would need to take a significant risk to halt the regime’s offensive. As long as the Russian air force does not strike Turkish forces in Idlib, the thousands of troops and tanks Turkey deployed into Idlib in recent days would allow it to halt and reverse the regime’s advances. Russia stands to lose from an all-out conflict with Turkey, and yet it does not want to see any reversal to the gains Assad has made with its forceful backing. The balance of power between Turkey and Russia means that Turkey has been unable to deter Russia from pressing on with the offensive, thus far. A clear signal by NATO or the United States that continued Russian and regime attacks would trigger a response would be much more effective in halting the offensive and waves of displacement.

Once a ceasefire is reestablished, addressing the long-term displacement and humanitarian crisis in Idlib must become the priority. European countries should provide additional assistance to Turkey and make concrete pledges to accept greater numbers of refugees living in Turkey. In exchange, Turkey should be pressured to create a legal route for displaced Syrians, at least women and children, to be able to escape the indignity of the camps.

In the meantime, Idlib must not become a holding pen for Syrians too scared to live under Assad and too poor to afford to smuggle themselves into Turkey.