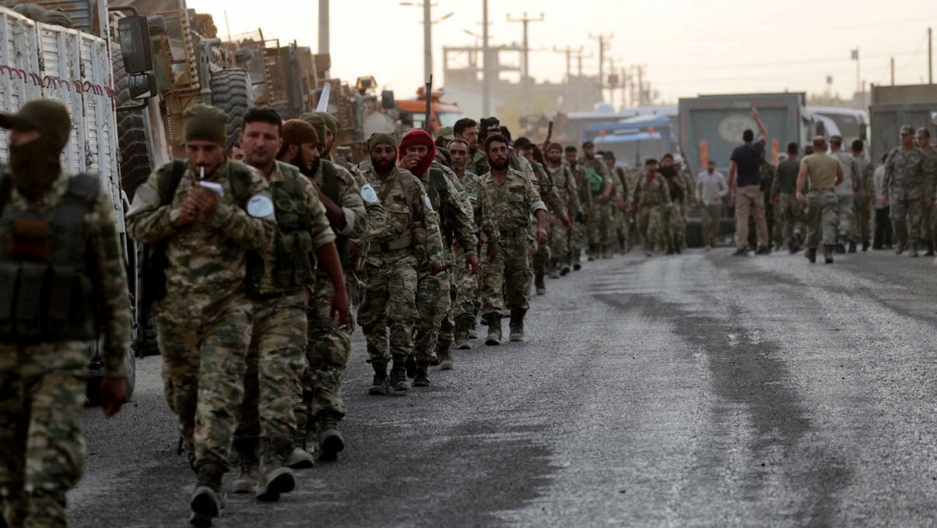 Turkey-backed Syrian rebel fighters walk together in the border town of Akcakale in Sanliurfa province, Turkey, on Oct. 11, 2019.

As Turkish jets continued their assault Friday on northern Syria, thousands of people scrambled to escape the area however they could — on foot, on motorcycles and in pickup trucks.

Khabat Abbas, a journalist from Ras al Ayn, one of the Syrian cities under attack, described a chaotic scene. She told The World residents took what belongings they could carry and fled. “There were a lot of civilians with their cars full of furniture, carpets, fridge, everything,” she said. “There were a lot of women and children.”

The Turkish attacks on northeast Syria come after US President Donald Trump abruptly shifted policy, withdrawing US troops late on Sunday evening from positions near the border between Syria and Turkey.

American officials on Thursday said that the roughly 50 US service members stationed in the area have been relocated.

Related: The impact of Turkey's offensive on people in Syria

In a series of WhatsApp messages, Abbas said that some residents in Ras al Ayn tried to take the bus out of town, but only one was available.

“The city bus came and everyone started to push each other, they just wanted to have a seat,” she said. “Children were crying, and people were fighting with the driver.”

The attack came as a surprise, as the Kurds are a longtime ally of the United States. Their assistance was instrumental in defeating ISIS in Syria. In 2016, the Syrian Democratic Forces, led by Kurdish fighters, waged a major campaign against ISIS in the strategic city of Manbij in northern Syria. With air support from the US, the SDF was able to retake Manbij from the terrorist group.

Baderkhan Ahmad, a 22-year-old photographer from the Syrian city of Qamishli told The World that despite the danger, he and his family have decided to stay.

Ahmad, who has been documenting the events on social media, said his relatives have hunkered down at his grandfather’s home, about a mile from the Syrian-Turkish border. Ahmad, who is a Kurd, said he thought the United States has abandoned his people.

“I lost a lot of friends in the war to defeat ISIS. We lost people, we lost neighbors, even members in the family, and now no one is supporting us and everyone just left us,” he said.

Ahmad said he worried about what will happen to the thousands of ISIS prisoners and their families who are being held in camps in northeastern Syria since the defeat of the group — not far from where he lives.

In September, he visited one such camp in al-Hol, a town in northeastern Syria. Ahmad said everyone he spoke to expressed a desire to take up arms again.

“All of them said [...] that they will get the revenge of their fathers who got killed in the war and the Islamic State will come back again,” he said. “Of course this mentality hasn’t been defeated and [it will] need years to make the region safe from these ideas and this terrorism organization.”

The United Nations’ refugee agency said about half a million Syrians currently live within three miles of the Turkish border.

Jeremy Stoner, a director with Save The Children, an international nonprofit, told The World he was concerned about the large number of people who are being displaced in the conflict.

“Those that are moving away from some of this action are obviously the ones that probably need the most support in the immediate term,” said Stone, who oversees the organizations’ operations in the Middle East and Eastern Europe.

According to Stoner, those on the move will likely head further south into Syria, where it’s relatively safer. Many, he said, will likely stay with relatives in the short term.

“But, of course, if this [becomes] a very big movement then what actually happens is that you end up having people living in either displaced camps or refugee camps […] and those need to be set up and you’ve got all of the initial concerns around water sanitation, food — all of those things, all the essentials of life — that’s what happens with very big movements,” he said.

Stoner added that many of those on the move had already been displaced due to prior fighting in Syria, which has been ongoing since the war started in 2011.

“This is almost like history repeating itself in terms of the day-to-day impact this is having on children’s lives,” Stoner said.