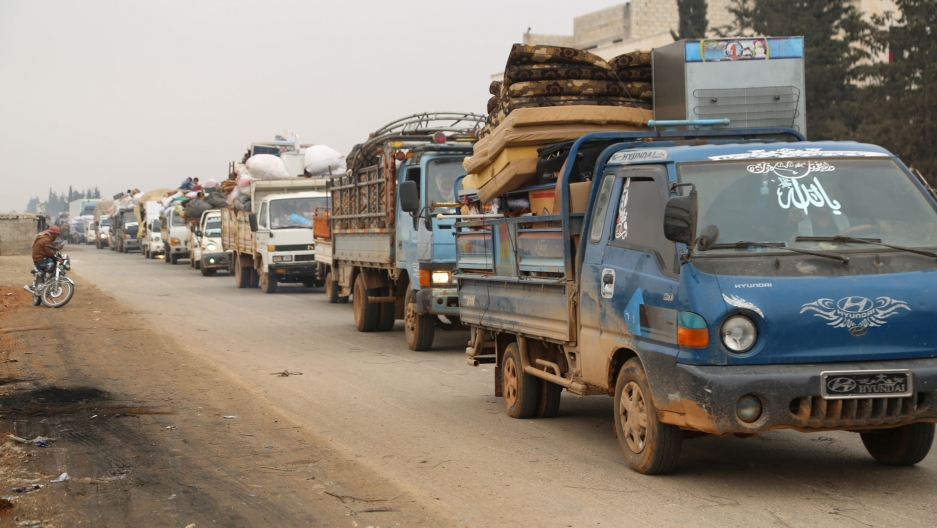 Update 1/23/2020: The World checked in with Muhmmad AlKassom on Jan. 16 and found out he had been displaced again. For two months now, AlKassom and his family have been on the move, fleeing ongoing airstrikes carried out by Syrian and Russian warplanes. The Syrian government has been leading a campaign to retake parts of the country that are under the control of anti-government groups.

Syrians on the ground say that dozens of civilians have died as a result of the airstrikes. The United Nations estimates that about 350,000 people have been displaced.

“After one month in western Aleppo, now I have been displaced to northern Aleppo, to al-Bab city. For the same reason — bombing from [Syrian President Bashar al-] Assad and Russia,” AlKassom said.

AlKassom traveled on a motorbike to western Aleppo to al-Bab. He said that unknown men tried to kidnap him — twice — on the way. Winter conditions made the journey even more challenging, he added.

“The most difficult thing on the road was the cold,” he said. “I was really freezing.”

The six orphaned children who were in the care of AlKassom are also in al-Bab now. He said they are living in a house with other displaced Syrians. “It’s a small house with two rooms for 21 people,” he said.

AlKassom also said he is running out of savings. He used to earn a living as an English teacher in Idlib. But he lost his job when he became displaced, and returning isn’t an option. AlKassom found out his home was destroyed shortly after he fled Idlib. “I [lost] my school. I [lost] my kids,” he said, referring to his students at school.

Muhmmad Alkassom used to spend most of his days at an elementary school in Maar Shoreen, a village in Idlib, a province in northwest Syria.

The 29-year-old teacher has lived in Idlib all his life. It's where he taught English to students between 6 and 9 years old. He loved the school and his students, he told The World.

“The best thing I ever did in my life was to teach the kids,” he said. “They are everything to me.”

His life dramatically changed last week when Russian and Syrian planes began bombing his village and the surrounding areas. The school was forced to shut down and most of the students fled.

In just five days, at least 100,000 people have been forced to flee their homes in Idlib — "with thousands more unable to reach safety due to the intensity of hostilities and now fearing for their lives,” according to a statement from the International Rescue Committee, a nonprofit.

Activists with The White Helmets, or Syria Civil Defense, a nonprofit, have posted videos of dramatic rescue operations — one involving a little girl stuck under the rubble.

Idlib is the last territory held by a group known as Hayat Tahrir al-Sham, which has links to al-Qaeda and opposes the government of Syrian President Bashar al-Assad.

When The World spoke with Alkassom last week, he said he had gone from teaching every day to taking shelter in the basement of his home. “The bombings start from 9 in the morning, and it goes on until midnight,” he said over a scratchy WhatsApp line. 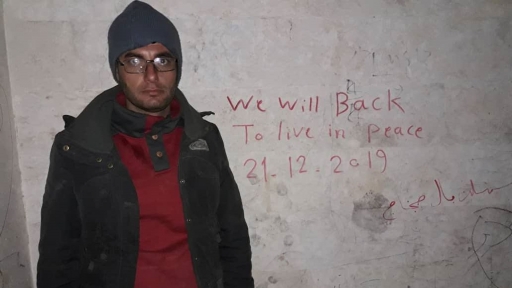 A portrait of Muhmmad Alkassom taken in front of his house in Maar Shoreen, a village in Idlib, Syria.

Alkassom and two of his friends spent most of the day in hiding. They had found a way to keep themselves occupied, he said. “We listen to the warplanes,” Alkassom said. “We know the difference between a Syrian jet and a Russian one.”

They waited until the airstrikes were over and went out to assess the damage. What they witnessed was horrific — civilians, including children, trapped under the debris of demolished buildings.

The Syrian government claimed that the goal of its campaign was to rid the area of “terrorists.”

But Fadel Abdul Ghany, who heads the Syrian Network for Human Rights, said civilians have been targeted.

“The Russians and the [Syrian] regime are targeting hospitals, schools, civilians, neighborhoods and at least 70,000 have been displaced in the past couple of days,” he said.

Idlib residents are fleeing north, Abdul Ghany added, to the Syrian-Turkish border. But what makes matters even worse, he said, is that most aid organizations have left the area since Turkey started its incursion into northern Syria in October 2019.

A United Nations Security Council resolution currently allows for some humanitarian aid to get into Syria — food, medical supplies — to alleviate the suffering. But the resolution expires in January 2020. Last week, the UN Security Council met to renew the measure, but China and Russia both vetoed it.

"The Russian Federation's and China's veto yesterday of a Security Council resolution that allows for humanitarian aid to reach millions of Syrians is shameful," said Secretary of State Mike Pompeo in a statement on Saturday, adding that the two countries have "blood on their hands."

Alkassom told The World in a series of interviews that he planned to stay at his home for as long as he could.

“I stay here because of my house. I have to protect it. I have to save it not only from the bombings, but from thieves too,” he said.

But by Monday, Dec. 30, he had made the difficult decision to leave. He said the situation had become too dangerous to stay.

The World could not immediately verify the number of airstrikes in Idlib, but reports from the area supported Alkassom’s claim.

Related: The World closed its door to Syrian refugees. Now Turkey wants to send them back.

Alkassom packed some food and blankets and hired a driver to get to safety. Like so many of his neighbors, he headed to Aleppo, in the north, where he had rented a house.

Only a few hours after he had left Idlib, he said, he learned that his home had been bombed. A friend had sent him pictures of his destroyed house. 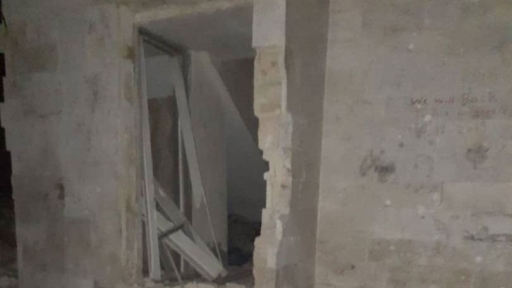 Muhmmad Alkassom's house was bombed in Maar Shoreen, a village in Idlib, Syria.

“My heart is broken for that,” he said. “You know, I lived my life there in that home. Every memory I have [is from] inside that home. And now, it’s nothing. Just nothing. Maybe I will never [be able to] go back there again,” he said.

Alkassom had also been taking care of six orphans, who are between the ages of 2 and 6. When the bombings began, he had sent them away to Aleppo, to safety, worrying he might never see them again.

On Monday, the family was reunited. Alkassom was able to join the children in his rented home in Aleppo.

But they are far from happy. “The saddest thing for them is school,” he said. “They don’t have school. They don’t go to school. They’re just sitting at home.”

‘A crime against humanity’

Abdul Ghany, of the Syrian Network for Human Rights, said the world is yet again standing by as bombs fall on civilians in Syria.

“The problem is mainly with the failure from Western countries toward what’s going on in Syria. These [are] crimes against humanity,” he said.

Abdul Ghany said he visited the United States in September and discussed the war in Syria with American officials. But he said he didn’t get very far.

US President Donald Trump has made it clear he doesn’t want to send more troops into Syria and has said repeatedly he wants to end US involvement in “endless” wars.

“I have this feeling that there is not much care about what’s going on to those civilians, and there is no political will,” Abdul Ghany said.