Amani Ballour graduated from Damascus University with a medical degree in 2012. She dreamed of becoming a pediatrician. But the Syrian revolution was about to put her dream on hold.

Thousands of Syrians were out on the streets for months, demanding an end to Syrian President Bashar al-Assad’s government. Assad wasn’t leaving, and responded with an iron fist, ordering the airstrikes that disrupted the daily routines of thousands of people.

She decided to stay in Ghouta, the very place that came to witness the longest-running siege — five years — in modern history, according to the UN.

After Syrian forces laid siege to Eastern Ghouta in 2013, they pounded the area with airstrikes. They turned homes, schools and shops into piles of rubble. Scores of civilians died. The ones who survived faced starvation.

Ballour had very little medical experience outside of the classroom. But she knew she had to help. She volunteered to treat the wounded in a makeshift clinic set up in a hospital that was still under construction.

“It was about two or three rooms at the beginning. So, we made one an emergency room and another room for operation.”

“It was about two or three rooms at the beginning,” she told The World. “So, we made one an emergency room and another room for operation.”

Earlier this year, the Council of Europe, a human rights organization, awarded Ballour the Raoul Wallenberg Prize “for her personal courage, bravery and commitment in saving hundreds of lives during the Syrian war,” according to the organization.

Related: Syrian activist Raed Fares wanted 'a free Syria for all Syrians.' It may have cost him his life.

Ballour’s story and the underground hospital where she managed a 100-person team in a war zone is captured in a National Geographic documentary called “The Cave,” which has been nominated for an Oscar.

In 2016, director Feras Fayyad sent three local photographers to follow and film Ballour and her team in the hospital in Ghouta. Ballour said she first rejected the idea of participating in a documentary, but changed her mind.

“I wanted this story to stay. I wanted people to know the truth because at that time, we thought none of us are going to survive.”

“I wanted this story to stay. I wanted people to know the truth because at that time, we thought none of us are going to survive,” she said.

In the spring of 2013, Syrian government forces laid siege in the suburbs of Damascus.

Some 400,000 people suddenly found themselves cut off from the outside world, according to the United Nations. The agency said Syrian forces carried out airstrikes on a daily basis, and deliberately shelled and burned crops and farms in order to starve the population.

Food became so scarce, the UN said, that some families lived on tree leaves.

Related: Idlib in northwest Syria is under attack from Russian and Syrian jets. Here’s what one resident told us.

“At times, you couldn’t see anyone on the surface; all the people [were] in some shelters underground. And some people stayed for three or four days without food, and they couldn’t get out.”

Ballour watched as Eastern Ghouta slowly transformed into a ghost town. “At times, you couldn’t see anyone on the surface; all the people [were] in some shelters underground. And some people stayed for three or four days without food, and they couldn’t get out.”

In 2018, Médecins Sans Frontières (Doctors Without Borders), a medical nonprofit, reported that some 70% of the people in one neighborhood in Eastern Ghouta lived in basements and makeshift shelters underground.

Over the course of two years, Ballour and her small team became an essential part of that subterranean life. When the airstrikes got even more intense, they moved the operating room to the hospital’s basement. “We fixed it because it was supposed to be a kitchen, so we worked a lot on this place to make it a good place to be a hospital,” she said.

They nicknamed the dark, airless space “The Cave,” or “Al Kahf,” in Arabic. 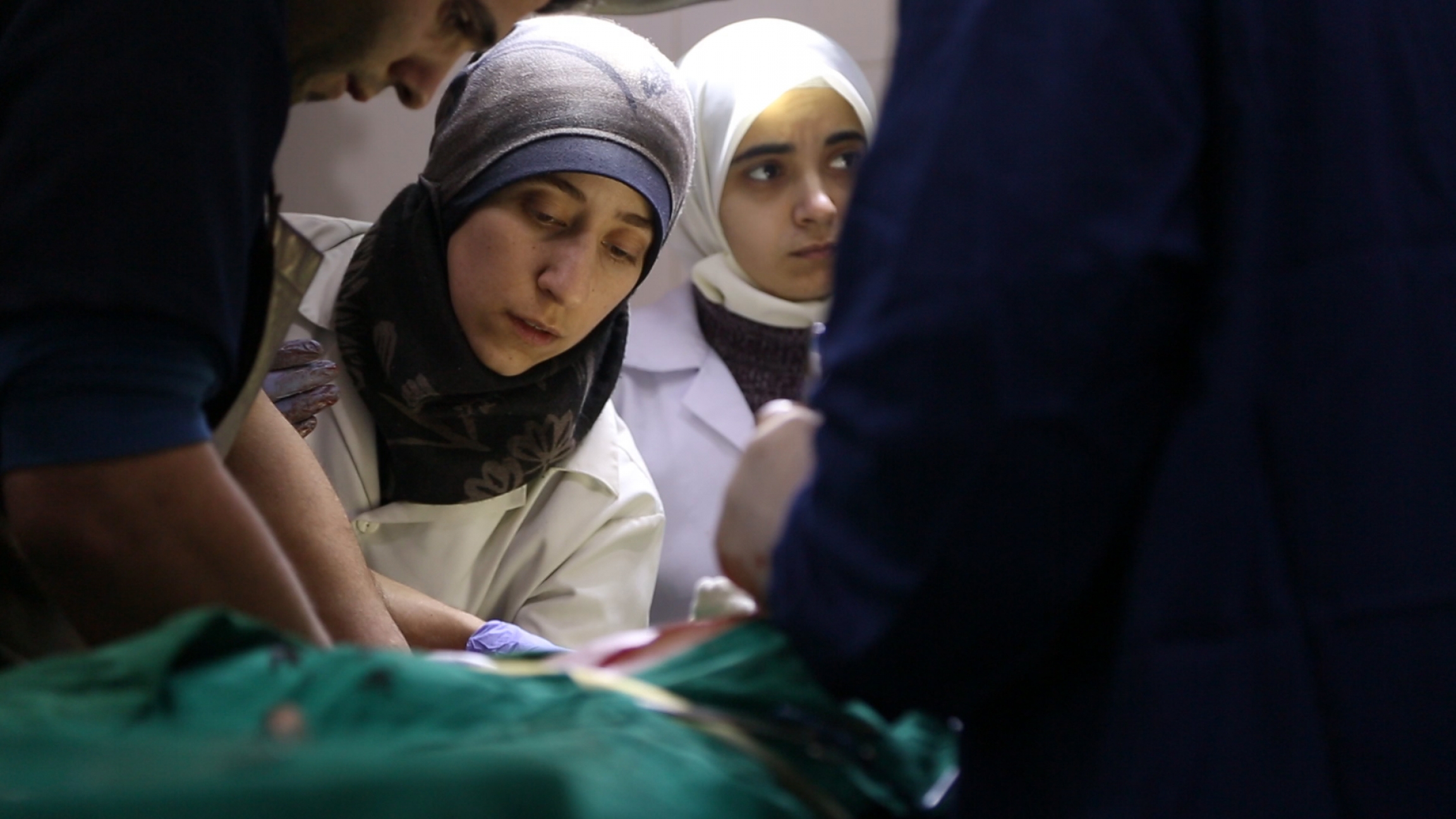 Dr Amani Ballour, who managed an underground hospital during the siege of Eastern Ghouta in Syria, treats a patient in a scene from the film "The Cave" by Syrian director Feras Fayyad.

Related: 'He wanted to give back': Aid volunteer killed on the Syria-Turkey border

Inside the Cave, Ballour focused on her passion — helping children. Often, her patients were kids who had survived airstrikes. Rescuers pulled them out of the rubble and then rushed them to the makeshift hospital. In many cases, Ballour had no option but to amputate their limbs. “Children didn’t understand that,” Ballour said, and they asked her why she was “cutting off” their arms or legs.

“We were without answers,” Ballour added.

Ballour was so busy helping patients, she barely found time to process the atrocities around her — except in the rare quiet moments in her office, where she would break down in tears. “You know, it’s difficult to stay in this place, but it was my choice,” she said. “I wanted to stay with these people.”

Food was scarce for the hospital staff, too. Ballour and her team planted vegetables in patches of land near the hospital. Lettuce, tomatoes and corn grow nicely in that area, she said.

As the years went on, and the siege continued, Ballour and her team expanded the Cave. They dug tunnels that connected the hospital to Damascus, which made it easier to supply the hospital with medical supplies and food. “[The Cave] became a very big place, very strong,” Ballour said.

Hanny Megally, one of three commissioners on the UN Commission of Inquiry on Syria, described the Syrian government’s use of sieges as part of its military strategy.

“The tactics that we have seen used repeatedly is to lay sieges on areas where civilians and armed groups are living together to try and force the civilians to move by bombing the essentials that civilians need to live, like hospitals, schools, water and electricity supplies.”

“The tactics that we have seen used repeatedly is to lay sieges on areas where civilians and armed groups are living together to try and force the civilians to move by bombing the essentials that civilians need to live, like hospitals, schools, water and electricity supplies,” Megally said.

In 2018, the Syrian government intensified its attack on Ghouta. This time, Ballour said, it was as if the forces had upgraded their weapons. “They started to bomb every second and all the time, during the day and the night,” she said. “They bombed everything, even the shelters underground.

Even the underground tunnels were no longer safe. Ballour was in charge of the hospital and about 100 people. Besides the airstrikes and the starvation, the residents of Eastern Ghouta endured two major chemical attacks — a sarin attack in August 2013 and a chlorine attack in 2018. 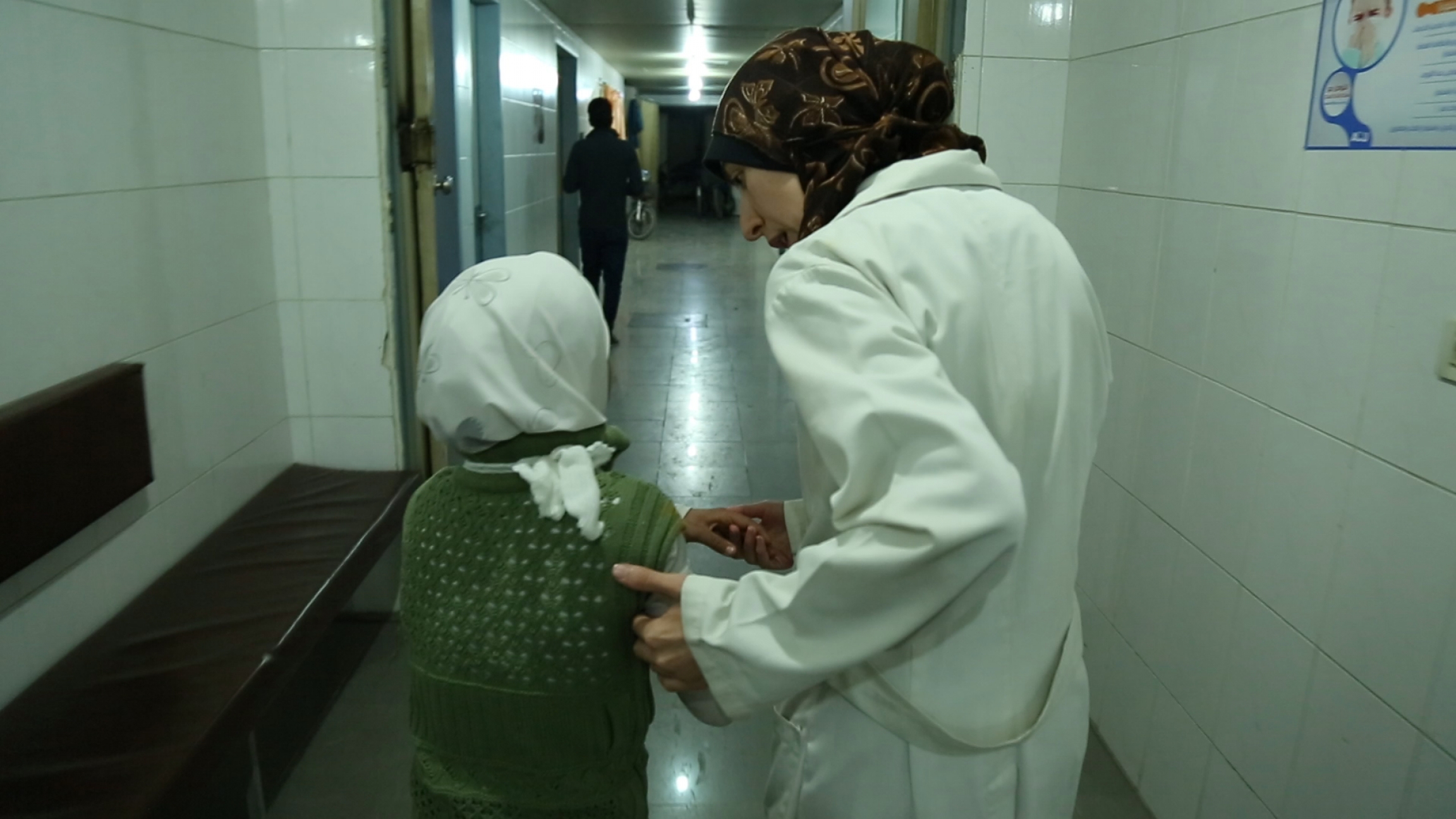 Over the course of two years, Dr. Amani Ballour and her small team became an essential part of subterranean life in Eastern Ghouta. When the airstrikes got even more intense, they moved the operating room to the hospital’s basement.

By March 2018, Ballour said forces allied to the Syrian government were getting closer and closer to the Cave. That’s when she and the team decided to leave. “I was very angry and very sad, you know? We stayed for more than five years, and we did great work.”

Life in the Cave was grueling, Ballour said, but it was a testament to their defiance against the Syrian government. On March 18, 2018, they evacuated the wounded and got in the back of a van and sped off. “It was like someone took away my soul,” Ballour said.

Ballour fled to northern Syria, where she spent three months in limbo. She eventually got married and moved to Turkey, where she lives now. As for what happened to the hospital after they left, Ballour said the Syrian government closed the Cave and it currently remains empty. Ballour hopes to one day return to Eastern Ghouta and work in the Cave again.