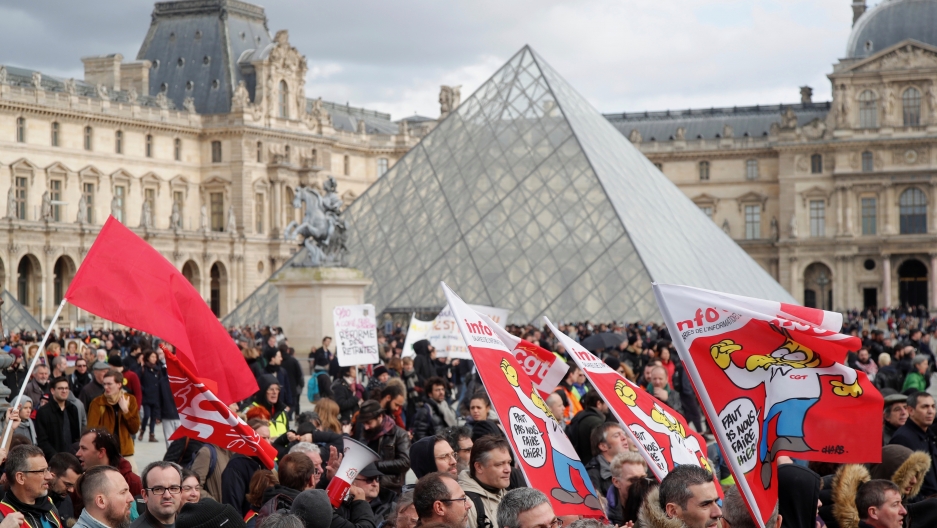 Protesters attend a demonstration in front of the glass pyramid of the Louvre museum before the opening debate on the French government's pensions reform bill at the National Assembly in Paris, Feb. 17, 2020.

On a recent sunny afternoon, garbage trucks slowly made their way down a narrow road in the normally scenic center of Paris. It was their first trip to pick up the trash in four days, and there was a lot of work to do. Dozens of garbage bins blocked the streets, and they were overflowing with cardboard boxes, food scraps and wine bottles from restaurants.

The trucks had stayed away because of a strike, not by city garbage workers, but by crews who run incinerators just outside Paris. Those workers shut down the incinerators for two weeks to protest the government’s plans to modernize the French pension system. Since there was nowhere to take the garbage, it piled up in neighborhoods across the city. Local residents said they were annoyed.

Bruno Dupont, a local shopkeeper, said that in his view, the strikers were ruining the image of Paris and of France.

“We all have the right to strike in order to defend our future. If we don’t defend ourselves now, we won’t be able to do it when we’re 70 or 80 years old. But you don’t do it by leaving garbage all over the city of Paris.”

“We all have the right to strike in order to defend our future. If we don’t defend ourselves now, we won’t be able to do it when we’re 70 or 80 years old. But you don’t do it by leaving garbage all over the city of Paris,” he said.

Philippe Guénard, a retired businessman, said he believes unions, like the one calling for the strike, have too much power.

“They represent a minority, but control the majority,” he said. “They’re interfering with people’s lives.”

The garbage strike was just the latest in a series of protests that has at times paralyzed the country since the beginning of December. French President Emmanuel Macron has proposed a new law to streamline the complicated French pension system. On Feb. 17, the French parliament began to debate the pension reform bill.

Polls show that most French people oppose the reforms. Unions tried to stop them with a countrywide, public transit strike that lasted six weeks. Those strikes have ended, but some unions have continued other smaller protests.

The union behind the garbage strike was the militant Confédération Générale du Travail (CGT), or the General Confederation of Labour. The CGT is France’s oldest and second biggest union, and the only one that says it won’t back down until the government abandons its plan to modernize the pension system. The CGT and other unions have called for another nationwide transit strike.

The CGT’s combative leader, Philippe Martinez, is a former member of the Communist Party who worked his up through the union ranks as a supply chain specialist at the French automaker Renault. Martinez has been a constant media presence in the monthslong battle against pension reform. And he’s made frequent appearances at protests and rallies of angry workers, telling them to keep up the fight for social justice and equality.

Related: The 'forgotten victims' of femicide in France

Martinez has promised to keep up pressure on the government with what he calls “innovative actions.” Those militant tactics have included the garbage strike, shutting down ports and cutting electricity to thousands of homes, Paris Orly Airport, and Rungis, the world’s largest wholesale food market.

Many of the union’s actions have been widely criticized. The right-leaning news magazine Le Point recently featured the CGT and Martinez on its cover, accusing the union of working to destroy the French economy.

Jean-Jacques Bourdin, a popular talk show host on the BFM television station, also took Martinez to task for the union’s actions, asking him why the union wants France to go broke.

Martinez defended his union’s tactics on the talk show. He said strikes do impact the economy, but that was not the point.

Camille Dupuy, an industrial relations expert at the University of Normandy in Rouen, said the CGT has become more militant as unions in France struggle to prove they’re still relevant.

“One of the things in play in this social movement is what is going to be the power of trade unions,” she said.

Dupuy said most workers in France still support trade unions. Although just 11% hold a union membership, more than 60% vote to choose their union leaders. However, during his tenure, Macron has refused to give in to union demands on any major labor reform. Dupuy said that has already weakened the unions.

She said they stand to lose even more power if they fail to convince Macron to make significant changes to the pension reform law.