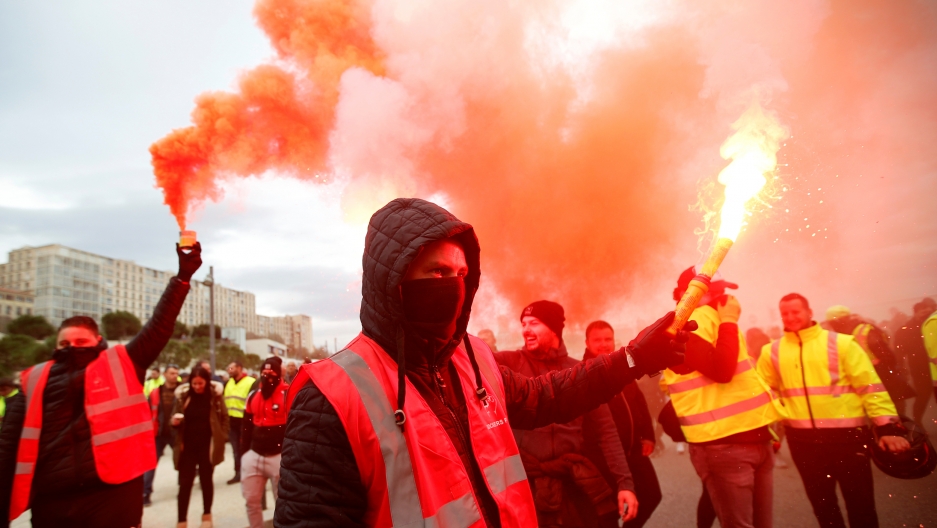 Protesters hold up flares as French labor unions members demonstrate against the government's pensions reform plans in Marseille as part of a day of national strike in France, Dec. 5, 2019.

Transport networks in Paris and cities across France ground to a near halt as unions dug in for a protest that threatens to paralyze France for days and poses the severest challenge to President Emmanuel Macron's reform agenda to abandon plans to overhaul the country's pension system.

Railway and metro stations in Paris were largely deserted during the early rush hour as commuters dusted off old bicycles, turned to carpooling rides or worked from home.

"What we've got to do is shut the economy down," Christian Grolier, a senior official from the hard-left Force Ouvriere union, told Reuters. "People are spoiling for a fight." 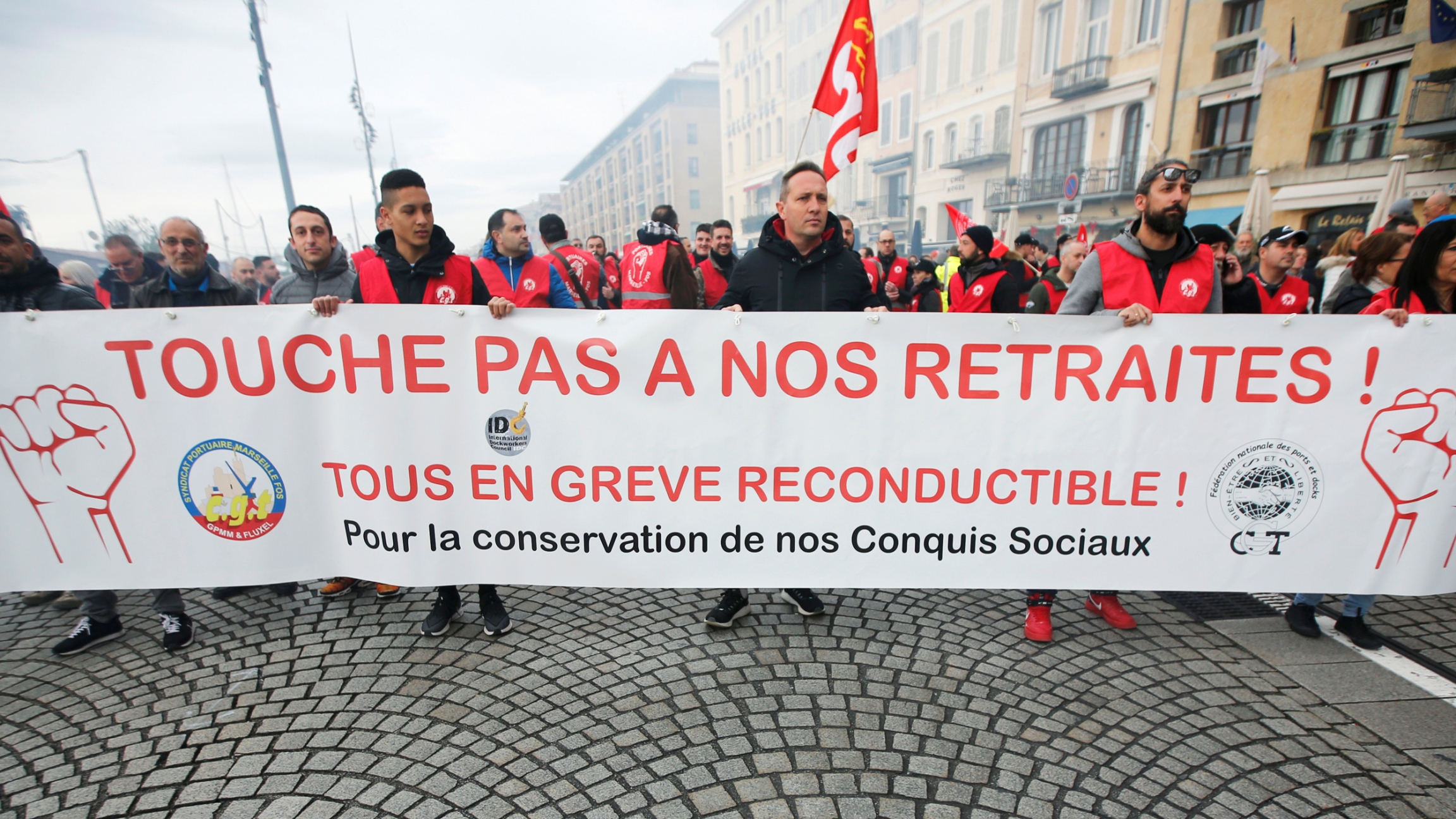 Protesters hold a banner during a demonstration against French government's pensions reform plans in Marseille as part of a day of national strike and protests in France, Dec. 5, 2019. The banner reads, "Don't touch my pension."

Airport workers, truck drivers, police and garbage collectors and others are all expected to join the strike at a time of widespread discontent towards Macron's drive to make France's economy more competitive and cut public spending.

Macron wants to simplify France’s unwieldy pension system, which comprises more than 40 different plans, many with different retirement ages and benefits. Macron says the system is unfair and too costly.

He wants a single, points-based system under which for each euro contributed, every pensioner has equal rights. 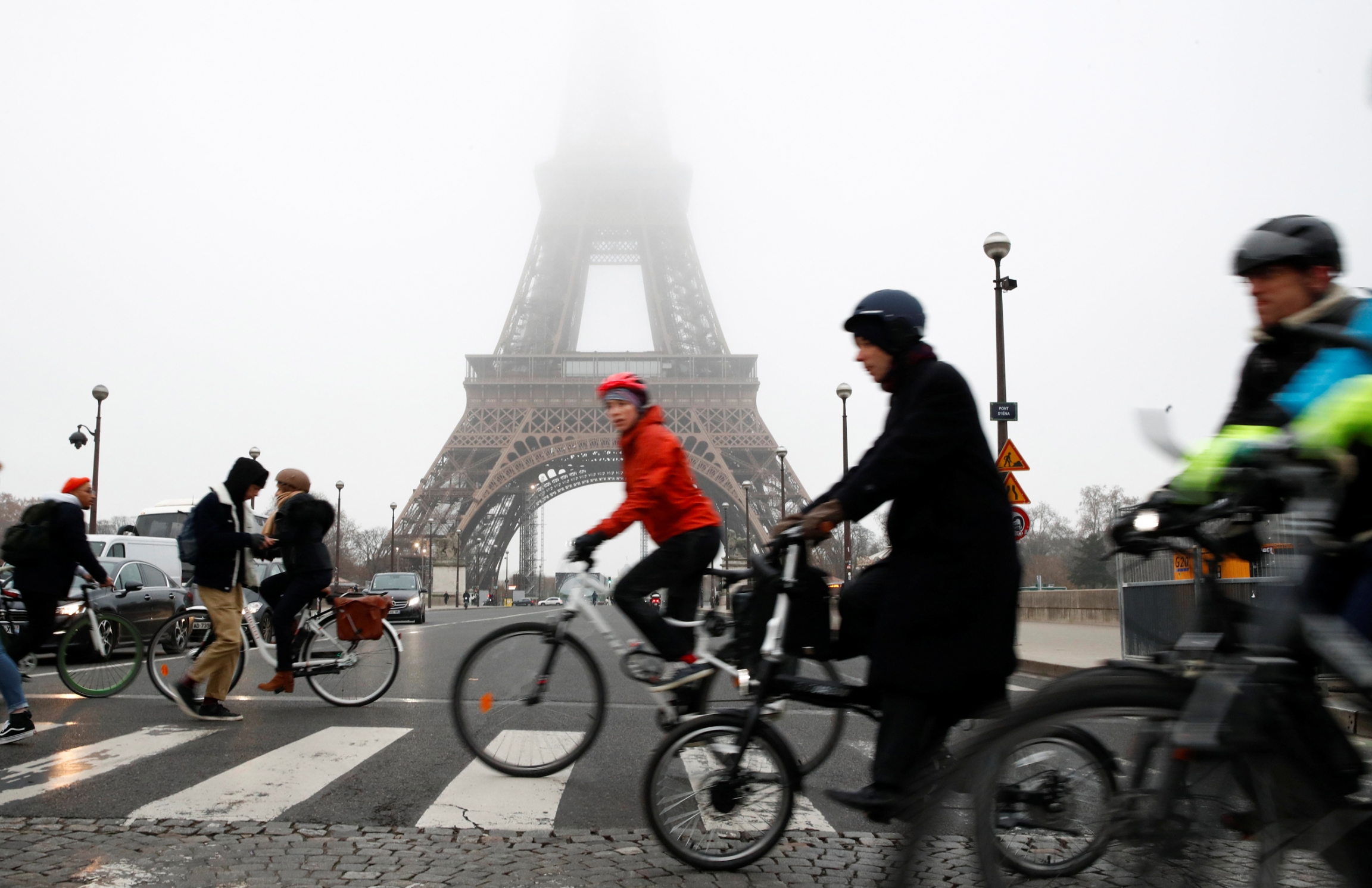 People ride bicycles near the Eiffel Tower during a strike by all unions of the Paris transport network as part of a day of national strike and protests against French government's pensions reform plans, France, Dec. 5, 2019.

The battle between Macron and the unions for public support will be pivotal to the strike's success. An Opinion poll last month showed almost half of all French opposed the reform.

"For 30 years successive governments have tried to bring reform and fail because the unions cripple the country," said 56-year-old cafe owner Isabelle Guibal. "People can work around it today and tomorrow, but next week people may get annoyed."

Before sunrise, riot police erected barriers in streets surrounding the president and prime minister's offices and searched the bags of pedestrians along the Champs Elysees boulevard, ahead of a day of street protests which the government has warned may be infiltrated by violent groups.

Protesters will march from the capital's Gare du Nord to Place de la Nation in the afternoon.

Interior Minister Christophe Castaner said thousands of anarchist "black bloc" and hardcore "yellow vest" protesters were expected to wreak havoc. He ordered shops along the route to close. Some 6,000 police will be deployed, including dozens of rapid-response officers on motorbikes. 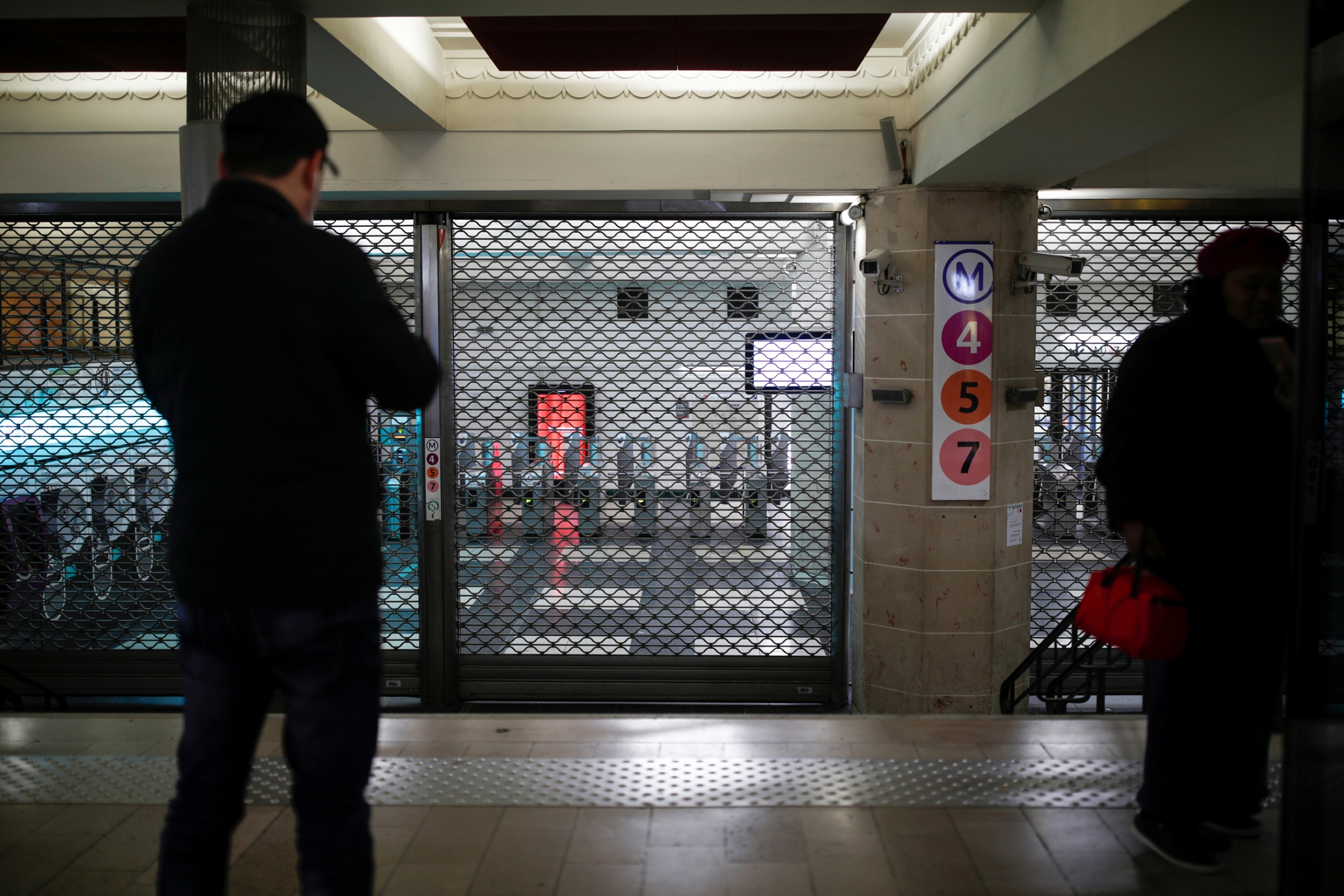 A closed entrance at the Gare de l'Est metro station is seen during a strike by French railway workers, Dec. 5, 2019.

The SNCF state railway said only one in 10 commuter and high-speed TGV trains would run. Train operators Eurostar and Thalys have cancelled services linking Paris with London and Brussels. The civil aviation authority asked airlines to cancel 20% of flights because of knock-on effects from the strike.

In southern France, protesters blocked at least one oil facility. Power output was down at two coal-burning power plants and one gas plant as some energy workers walked out, though there were no impact on nuclear output, grid operator RTE said.

For Macron, this week's showdown with strikers will set the tone for the second half of his mandate, with more difficult reforms to come, including to unemployment benefits.