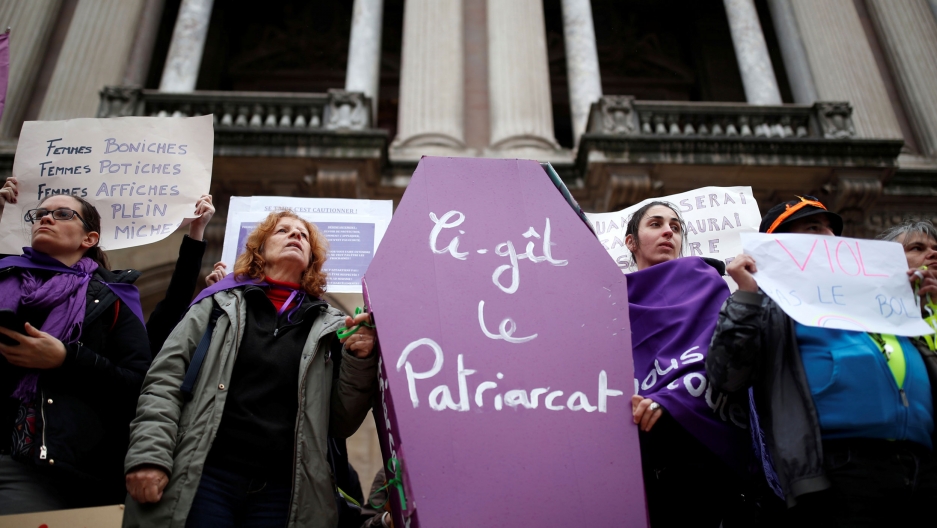 Women hold a coffin prop during a demonstration to protest femicide and violence against women in Paris, France, on Nov. 23, 2019. The slogan reads: "Here lies patriarchy."

In May, Chantal Monté sat down with her husband to celebrate her 72nd birthday. He killed her exactly one month later.

The tragedy made Monté the 78th victim of femicide in France in 2019. While the definition of femicide varies around the world, in France, it typically means when a woman is killed by a partner or ex-partner. There have been 116 femicides in France so far in 2019, according to Agence France Presse, a French press agency. Meanwhile, the advocacy group Femicides by Companions or Ex brings the total to 138.

In France, one woman is killed every three days. Women ages 65 and over make up about a quarter of all victims of femicide, but they’ve largely been left out of the discussion — or their deaths have been misclassified as mercy killings and suicide pacts.

“People don’t care,” said Nadia Neubacher, the daughter of Monté. Neubacher lives in Michigan with her family, but in May, she traveled more than 4,000 miles to southern France so she could join the celebrations for her mom’s birthday. She said everything seemed normal. 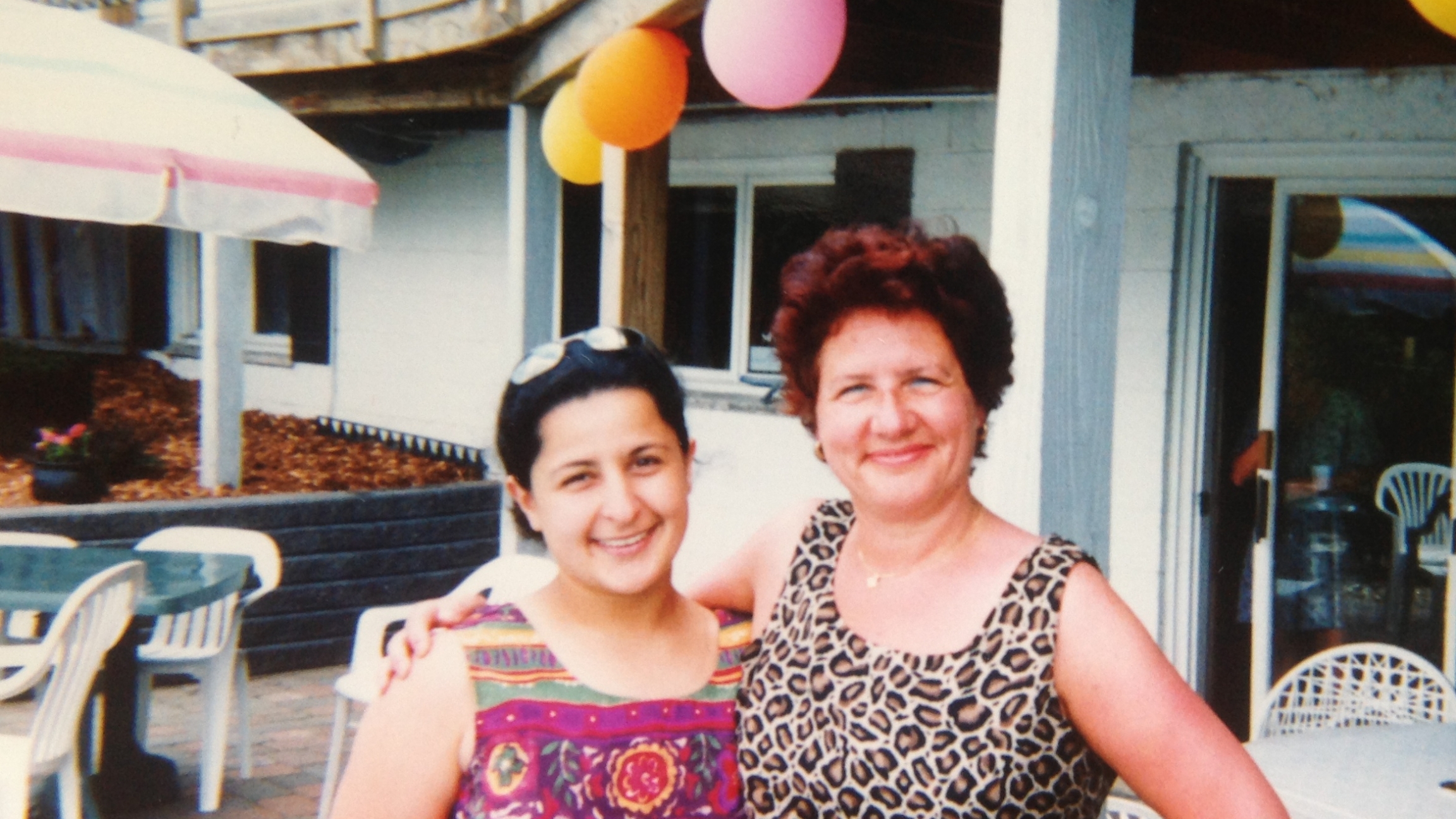 Nadia Neubacher (left) with her mom, Chantal Monté, during a visit to Michigan in 2003.

“I figured if something was wrong she would have left, but she never hinted ... we didn’t see anything,” she said.

In late June, Monté’s husband killed her using a shotgun as she was sleeping. Then he killed himself. She was 72. He was 89. They had been together for 20 years. Neubacher said she didn't know what motivated the murder.

“I don’t know if it’s because of the way they were raised [as a] a generation and that’s something they don’t talk about? I have no idea.”

Particularly in the case of older women, it’s not uncommon for abuse to go on for decades in secret.

“They’re paralyzed by the thought that nobody will believe them. ... On top of that, elderly women become convinced that if they speak up, people will respond with skepticism..."

“They’re paralyzed by the thought that nobody will believe them,” said Annie Guilberteau, the director of the National Federation of Information Centers on Women’s and Families Rights, an association that provides support for domestic violence victims in France.

Guilberteau said perpetrators often use manipulation tactics to convince victims that the abuse is their fault. In elderly cases, this grip has often been sustained for decades.

“On top of that, elderly women become convinced that if they speak up, people will respond with skepticism,” she said. “They’ll ask something like, ‘Well, if this has been going on for thirty years, why did you wait until now to say anything?’”

According to a government poll that surveyed women from 2012-2018, around 219,000 women are victims of domestic abuse every year in France. But it’s difficult to know to what extent elderly women are affected because the poll only surveyed women between the ages of 18-75 years old. The lack of statistics has led some in France to refer to older women as the “forgotten victims” of domestic violence.

“I could talk about my mom for hours and still come nowhere close to doing her justice,” she said.

She added that Monté was smart and had a contagious smile. She also loved to travel and take care of animals. She had cats, dogs and, at one point, she even adopted two donkeys.

“My sister and I were like, ‘Why are you doing this mom?!’ And she would just say, ‘I love donkeys.’”

Her mom was full of life “in every way,” Neubacher said. “So, for her husband to decide to kill her ... it was not my mom’s choice.”

But that’s exactly what some people suggested in the aftermath of the murder. At one point, there were rumors in the village of Bardos that Monté had died as part of a suicide pact with her husband. Neubacher believes people downplayed her death because she was an older woman.

“I understand my mom was 72 years old, but it does not make it OK to throw her life away like that ... to sweep it under the rug,” she said.

Earlier this month, investigators in Normandy were criticized for classifying a similar case of a couple in their 80s as a suicide pact.

And in July, there were headlines about an 83-year-old anesthesiologist who killed his 81-year-old ailing wife. In a letter, the husband wrote it had become too difficult for him to look after his wife, who was suffering from Alzheimer's.

These cases have generated debate about the issue of mercy killings and lack of support for older couples. But Neubacher said none of that makes what happened to her mother acceptable.

“Labeling any murder a mercy killing is absolutely idiotic. ... It’s a murder, let’s call it what it is. You can put a fancy word in front of it and it’s still a killing.”

“Labeling any murder a mercy killing is absolutely idiotic,” she said. “It’s a murder, let’s call it what it is. You can put a fancy word in front of it and it’s still a killing.”

Activists have criticized the government’s response as “not up to par,” with some expecting the government to put forth $1.1 billion in the fight against domestic violence.

Neubacher said she didn’t even know her mom was a victim of femicide until she got a call from “Femicides by Companions or Ex,” the group that tracks femicides across the country.

“And they told us it doesn’t matter how old the woman is,” Neubacher said. “It does not matter, she’s still a victim of femicide.”

Shortly after the murder, members of the association organized a march in Bardos, the town where Monté lived. On Nov. 25, a nationwide march against femicide drew in tens of thousands of people, including 49,000 in Paris alone. It was the city’s largest march against domestic violence to date.

As for Neubacher, she’s just holding onto things that keep her mom’s memory close, such as her favorite pair of glasses.