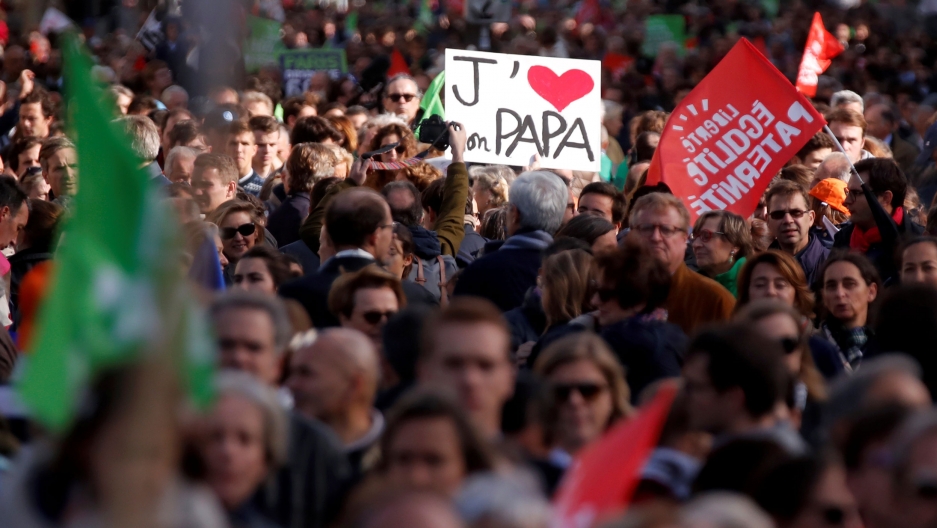 Protesters demonstrate against a reform bill that will widen access to medically assisted procreation to lesbian couples and single women, in Paris, on Oct. 6, 2019. The bill overwhelming passed the lower house of the legislature on Tuesday.

Isabelle Laurans and her boyfriend tried for years to have a baby. When nothing else worked, they decided to try in vitro fertilization, or IVF.

But halfway through the process, Laurans' boyfriend changed his mind. He dumped her the day they were supposed to make the embryo in the lab.

Laurans says she doesn’t remember most of what went through her mind that day. What she does recall is the overwhelming fear that she’d never get to be a mom.

“I was 38. I knew it would be perhaps too late for me if I waited for a new relationship.”

“I was 38. I knew it would be perhaps too late for me if I waited for a new relationship,” she said.

That same day, Laurans says she was on the internet, looking for a Plan B.

“I didn’t want to risk missing out on becoming a mother altogether,” she explained. 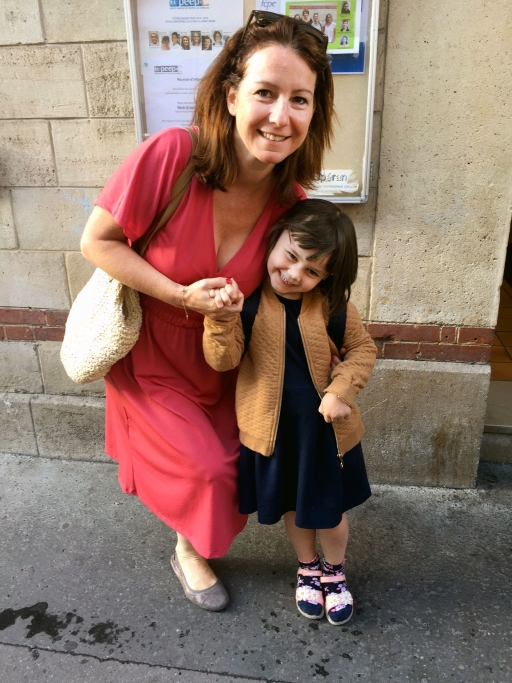 Isabelle Laurans poses with her daughter, Charlotte. Laurans had to leave France for IVF treatment in Belgium to get pregnant with her daughter because it is not legal in France for single woman or same-sex couples to use assisted reproductive technologies.

So, Laurans decided to get IVF on her own.

One problem, though: In France, single women aren’t allowed to get IVF. They're also not allowed to freeze their eggs or get artificial insemination. Lesbian couples are also denied access to assisted reproductive technologies. French law only permits these treatments to women in long-term, heterosexual relationships, putting France at odds with most of its European neighbors (though Germany has similar restrictions).

And so in 2015, Laurans traveled to Belgium to get the treatment. She gave birth to a baby girl, Charlotte, later that year. Laurans says she was lucky to be able to do it.

“It was expensive … and it wasn’t easy,” she said. She had to go through two rounds of IVF. It cost her about $5,500 in all. That might seem cheap to Americans who can pay between $10,000-$15,000 per IVF cycle, depending on insurance coverage. But in France, if Laurans had still been with her boyfriend, the treatment would have been free.

Then there were other complications, Laurans said. She went to Belgium for the actual procedure, but she had to find a doctor in France who would turn a blind eye and prescribe hormone shots and do ultrasounds.

“It made me feel like an outlaw,” Laurans said.

France is in the process of modernizing its IVF laws.

On Tuesday, France’s National Assembly, the lower house of parliament, voted overwhelmingly to pass a bill that would give single women and lesbian couples legal access to IVF, egg freezing and other forms of assisted reproduction. The cost of the treatment would be completely reimbursed by the state, as long as the woman is under 43 years old.

Related: Once the go-to place for surrogacy, India tightens control over its baby industry

The National Assembly voted 259 to 114 in favor of the bill. The bill heads to the Senate in January.

The bill was a campaign promise of Emanuel Macron, who called the existing rules a form of “intolerable discrimination.” When his health minister, Agnès Buzyn, introduced the bill on the floor of the National Assembly, she declared that “the criterion that defines a family is the love that unites a parent and a child.”

Still, the bill has become a new front in the French culture wars. While the French tend to be laid-back about sex, occasionally, a Catholic-tinged, conservative resistance bubbles up. It happened in 2013, with large protests against legalizing same-sex marriage. And now it's happening again. 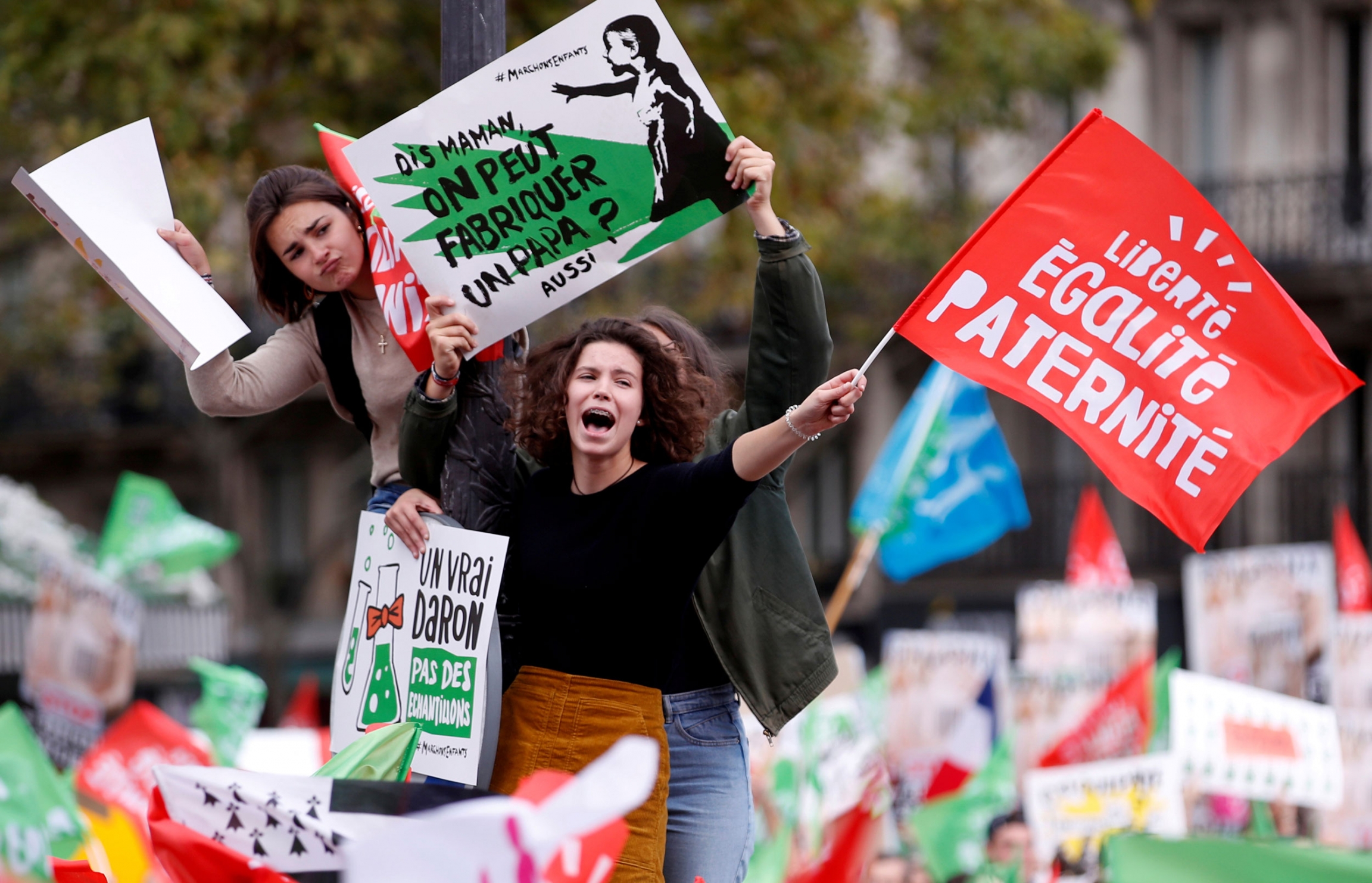 Protesters demonstrate against a reform bill that will widen access to medically assisted procreation to lesbian couples and single women, in Paris, France, on Oct. 6, 2019.

An estimated 75,000 protesters took the streets of Paris on Oct. 6, carrying banners proclaiming “Liberty, equality, paternity!” — a play on the French national motto.

The protest was organized by the same groups behind the anti-gay marriage protests in 2013.

Related: An Israeli woman traveled to the West Bank so she could be sure she’d have a boy

“Expanding medically assisted reproduction [to single women and lesbian couples] means we would choose, voluntarily, to deprive children of a father,” argued Ludovine de la Rochère, the president of the group, Manif pour Tous. “Of course in life, children may be deprived of their father. It happens. That’s life. But it’s different [when it’s] the choice of the law and of society.”

“This whole demonstration and all the public discussion we’re having about IVF is pretty much about how worried parts of the French population are about fathers and men disappearing from the public sphere. It’s ridiculous … yet very French.”

For the opposition, the law is about more than expanding access to fertility treatments. “This whole demonstration and all the public discussion we’re having about IVF is pretty much about how worried parts of the French population are about fathers and men disappearing from the public sphere,” said Alice Coffin of the French Association of LGBT Journalists. “It’s ridiculous … yet very French,” she said.

Despite these fears, polls show a majority of French voters support expanding access to fertility treatments. The bill must now make its way through the Senate.

Isabelle Laurans, for one, is optimistic the double standard will end.

“In France, there’s one kind of family that’s accepted and another kind that’s not.  It’s hard.”