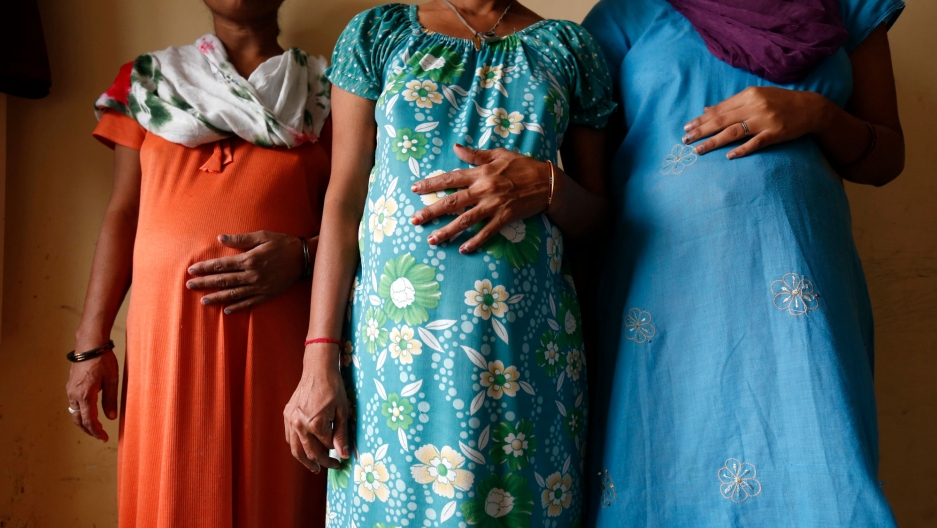 Surrogate mothers Daksha, 37, Renuka, 23, and Rajia, 39, pose for a photograph inside a temporary home for surrogates provided by Akanksha IVF centre in Anand town, about 44 miles south of thecity of Ahmedabad in this 2013 file photo. Two years later, in 2015, India changed it's laws for surrogacy and shut down the international market. Now, a new bill may make any commercial surrogacy illegal.

Outside of a maternity ward, a young man and woman are bent over a phone. A few minutes ago, a nurse beckoned them over and ushered them in through a closed door. They came back out smiling. On the phone is the photo of a newborn baby girl. She’s in the Neonatal Intensive Care Unit; these are her parents in the waiting area, and her birth mother, or gestational carrier, is in the ward, getting some much-needed sleep.

Since the '90s, couples and single people, gay and straight, have been coming to India to hire surrogates to have their babies. And here, at the Akanksha Hospital in Anand, Gujarat, the founder, Dr. Nayana Patel has assisted in the birth of nearly 1,300 babies via surrogacy.

Related: In Ukraine, surrogacy is legal, but some ask if it's exploitation

Surrogacy is reported to bring $400 million every year to the Indian economy. Doctors in even the smallest towns assist in it, but a few towns like Anand have turned it into big business. Here, fertility clinics not only assist in surrogacy — they also keep a rotating roster of surrogates in all stages of pregnancy, right on the premises. Women come from all over the country, and for nine months, they live in a dorm away from their families and carry a stranger’s child to term. 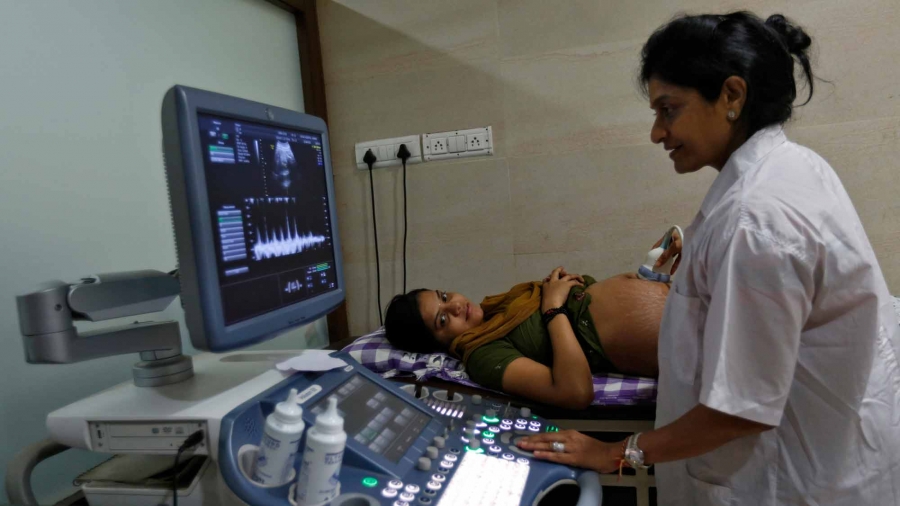 Dr. Nayana Patel carries out an ultrasound examination a 23-year-old surrogate mother at the Akanksha Hospital in this 2013 file photo. Patel created her clinic after being contacted by a woman born without a uterus who wanted to find a way to have a child.

“It was always my dream to practice infertility and make from patients to parents," Patel says.

She started IVF training in the '90s, when it was still a nascent field and set up a fertility center in 1999.

“But I never thought of doing surrogacy because even I felt that how can somebody carry somebody’s child and just hand it over," Patel says. "Is it correct?”

Then, she got a letter from an Indian woman in the UK who was born without a uterus. The woman and her husband sought surrogacy. They tried in the UK and couldn’t find a surrogate. So, they turned to Patel, who said she’d help them if they found their own surrogate.

After a futile search that lasted for months, the girl’s mother agreed to carry her daughter’s baby. As Asia’s first grandmother surrogacy, the media attention brought an outpouring of letters to Patel. 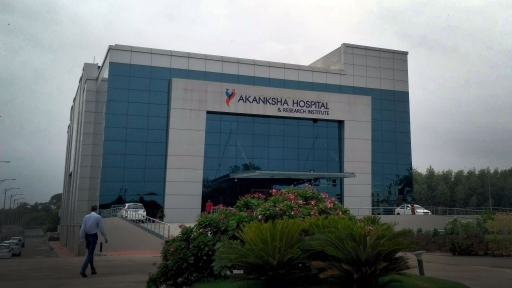 At Akanksha Hospital in Anand, Gujarat, the founder Dr. Nayana Patel has assisted in the birth of nearly 13,000 babies via surrogacy.

In India, perhaps even more than other parts of the world, having a child — and particularly a male child — is a big part of marriage. For many people who have an arranged marriage, having a male heir is the main reason they tie the knot.

Patel started to hear from couples who couldn’t conceive and was moved by their stories.

“It made me think, 'What could happen to their marriages?'" Patel says. "Either they live a childless life or there is a divorce or a second wife sometimes. O,r she’s totally depressed and tries a suicide attempt.”

So, she started Akanksha, which translates to "desire." The clinic has now grown into a full hospital.

Until 2015, anyone from anywhere could fly to India, spend about $35,000 and leave with a baby. The industry was barely regulated until reports from human rights agencies started to circulate about how surrogates were being treated. Some surrogates were ignorant of what the process entailed, ill-informed of their rights, and, in some cases, weren’t being paid at all.

So, in 2002, the Indian Council of Medical Research put together some guidelines to ensure better, safer treatment of surrogates. Within a decade, things got more stringent — Patel says these regulations were necessary and good. For instance, the Indian government gave out medical visas only after the intended parents’ country promised to allow the baby back in, with citizenship; surrogates had to be married and have their own children. Surrogates also had more rights and consent became better enforced.

Patel’s hospital does multiple levels of counseling — orally and through audiovisual presentation — as many surrogates are illiterate and would not be able to read a contract. The surrogate’s husband is also included in a session, to ensure they understand as a family what they’re signing up for, both physically and emotionally.

Then, in 2015, the government put a stop to all international surrogacy, and India’s reproductive tourism business slowed down. Indian couples, like the one in the waiting room of Akanksha, can still have babies through surrogacy, but foreigners no longer can. Clinics that once housed more than 160 pregnant surrogates are now down to less than half the demand.

Sunita has been lucky. This is her second time being a surrogate; her first surrogate baby was implanted back when India still allowed international surrogacy. She was hired for a British couple. She giggles when she says she had no chance to get attached to the baby; not only was she counseled all along about handing over the baby — but also the baby was white.

She has three children of her own. Her husband is a tailor and earns about $60 a month.

She says that the first time she did it, it was so her family could afford a house.

“Our situation was terrible," she says. "Our house was makeshift, we had coconut palm fronds for the roof. We needed money.”

“With a lump sum, I can do much more. I have built my house; I’m going to send my children to college.”

Plus, here she gets to relax, watch television, take vocational classes and hang out with other surrogates. They’re looked after; it’s easy, she says.

But it’s still shrouded in secrecy. Only Sunita's husband, sister and children know she’s going in for a baby; everyone else thinks she’s in the city for a job.

“People will talk, and they’ll never believe I didn’t cheat on my husband; they’d only imagine the worst.” 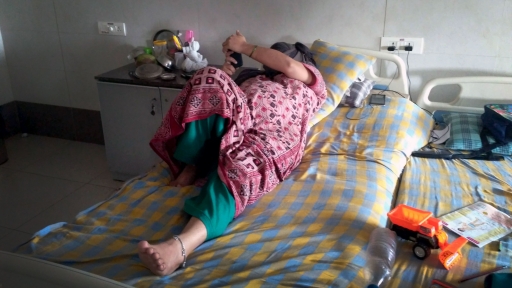 Ranjana Jain, a surrogate at Akanksha Hospital, wasn't comfortable with showing her face. Aside from her daughter, nobody knows she is here, seven months pregnant.

Even in the cities, couples who’ve had babies through surrogacy don’t want to publicly talk about it. In the last few years, several film celebrities have become single fathers to babies born of surrogates. Instead of taking away some of the stigma from the issue, they’ve downplayed it.

Meanwhile, there is a bill in parliament that would ban all commercial surrogacy — even for Indian couples. Couples who want to have a surrogate baby would need to meet a stringent set of criteria, including how long they’ve been married and proving other infertility treatment hasn’t worked. Plus their surrogate would have to be a close relative, doing it out of pure altruism.

Rakesh Kumar, a single father from Mumbai, has just had his second child through surrogacy.

“The right to parenting is universal and individual, as well," he said. "Doesn’t matter if you’re single, married, divorced, separated, whatever the case may be.”

His oldest child is 9 months old and his second is 23 days old. Kumar started the process for the second one on the very day his son was born.

The fear of the altruistic surrogacy bill — the bill that will outlaw commercial surrogacy — was a distinct trigger, he said. And he’s worried that it will create a black market for surrogacy.

Wherever there is demand and supply, the market will continue, he says; it will just go underground. He’s afraid it will lead to more domestic violence and trafficking.

Patel says she’s worried about the same thing. Already there are whispers about Indian women being taken to Kenya and Nepal to have surrogate babies. She suggests that stakeholders — parents, doctors, surrogates — need to approach the government medical committee and try to reason with them to push for stronger regulations rather than ending surrogacy entirely.

“I feel India could have become a leader in this thing," she says. "We could have shown the world we can do surrogacy the best possible way for anybody on this Earth but with proper regulations: looking after babies, surrogates — make sure that nobody is exploited.”

But for now, it looks like India’s commercial surrogacy days are numbered.

Editor's note: An earlier version of this story incorrectly said Dr. Nayana Patel has assisted in the birth of nearly 13,000 babies via surrogacy. It is 1,300.