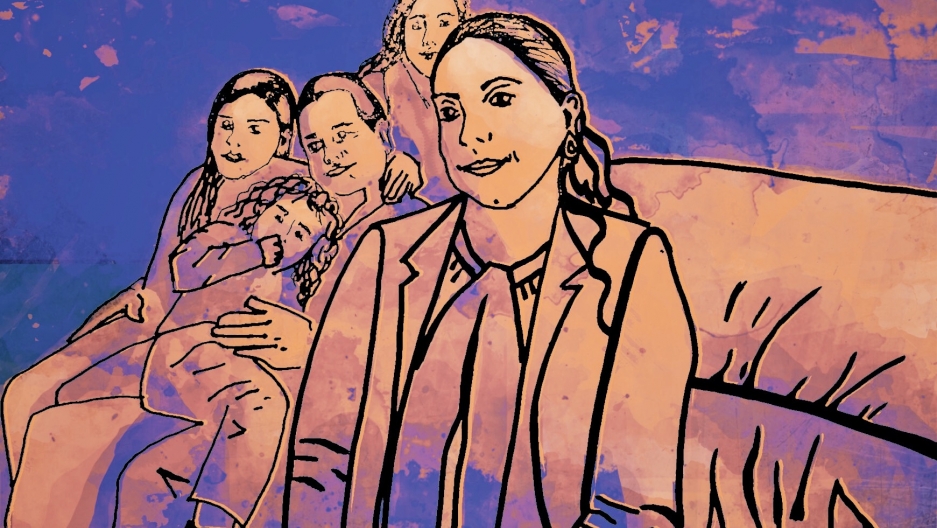 After her third daughter was born, Faten decided to make sure that her fourth child would be a boy. She says she has a career and a family to take care of. She can't keep getting pregnant over and over again.

Faten, 30, lives in a big house perched on a hill in the Arab-Israeli city of Umm al-Fahm, about 12 miles northwest of Jenin.

She has three young daughters — on this spring day, they are all dressed in matching black pants and lacy maroon tops. Her youngest, who is 4, scoots around the kitchen in a toy car.

Faten, who asked me not to use her real name to protect her privacy, is pregnant. Again.

Early in her last pregnancy, Faten went to her doctor for an ultrasound, arriving with a caravan of family members and boxes of sweets to celebrate. Her husband stood by her when the doctor pulled up the sonogram. “And [the doctor] said you have a third queen coming! I saw the big smile on my husband’s face,” Faten recalls.

Her husband was thrilled for another girl, but Faten wasn’t smiling. “I started crying,” she says.

Faten says the next few months were the most difficult of her life. Even though the pregnancy was a healthy one, people in her Arab Israeli community treated her as if she had experienced a loss. “I decided during the pregnancy that I would not go through this again,” she says.

Faten made the decision to make sure her next baby would be a boy.

Each year, thousands of Palestinians travel through Israeli checkpoints for medical procedures in Israel. But the traffic doesn't usually go the other way. Faten decided to go in the opposition direction, traveling to the West Bank to visit a state-of-the-art clinic in Nablus, the Razan Center for Infertility. The doctors there use a technique called preimplantation genetic diagnosis. The procedure is often used for early diagnosis of genetic mutations, but it can also be used to determine the sex of a fertilized egg before it’s implanted via in vitro fertilization.

Doctors at Razan perform more than 500 sex selection procedures a year, according to a clinic spokesperson.

Faten says she went through three IVF attempts before she became pregnant, and each attempt required six trips to the clinic. “Definitely it was worth it,” she says. “I need that boy!”

Faten has never heard anyone talk publicly about sex selection, and she is not sure how people in her community would react to her story, which is why she asked to refer to her by a pseudonym.

As an Israeli citizen, Faten is covered by universal healthcare, which includes fertility treatments for two children for women up to the age of 45. Israel has one of the highest rates of IVF in the world.

But IVF for sex selection is highly regulated, influenced by Jewish religious law. Couples are only eligible for sex selection for physical and mental health reasons, or if the couple has had four children from their relationship and does not have a child of the other sex. According to a 2014 study by Israel’s National Ministry of Health only 21 percent of applications for the sex-selection procedure were approved over a six-year period. Two thirds of the applicants were Jewish.

In the West Bank however, sex selection is largely unregulated. About 20 percent of the women seeking sex selection at the Razan clinic are Arab Israeli citizens, like Faten. Her doctor, Omar Abdul Dayem, says he has approval from a local mufti — the deputy head of Islamic affairs in Ramallah — to do the procedure. In Dayem's view, having only daughters can cause tension in a marriage. He says husbands might divorce their wives because they want a son.

At Faten’s home in Umm al-Fahm, her husband wraps his arms around his three young daughters on a big leather couch. He maintains that it’s his wife who wants a son. But Faten is impatient with that. She has degrees in math and computer science, and has a full-time job. “A wife and mother is no longer someone who stays at home and keeps having children. I have a career to pursue,” Faten says.

Faten says she feels pressure to have a boy to carry on the family name. “When you meet a woman with three sons, you feel like she’s on top of the world,” she says.

While we talk, Faten’s daughters are on the couch, watching her. Listening. I ask how she thinks hearing our conversation makes them feel.

“These girls are constantly hearing people telling me, wishing me to have a son,” Faten says. “So they’re aware of the societal pressures.”

Faten wants her girls to know they are loved. She has big dreams for them — after school they ride horses, play sports and study music. Everyone knows girls are higher achievers than boys, Faten says — and she sees herself as one of those high-achieving women.

“I live in a family that really appreciates me for who I am,” she says. But she adds that it’s difficult for her that the coming baby could somehow determine whether she is a successful woman.

I spoke with Faten and her family in the spring. In September, Faten gave birth to her fourth child.