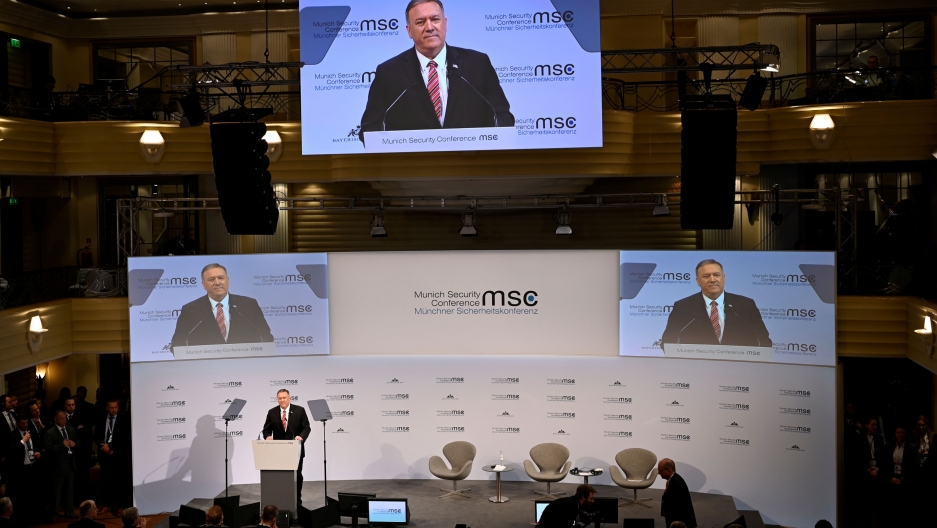 US Secretary of State Mike Pompeo speaks on the podium during the 56th Munich Security Conference in Germany, Feb. 15, 2020.

Foreign policy heavyweights gathered in Munich over the weekend for the annual global security conference.

"'Great again' — even at the expense of neighbors and partners," quipped Steinmeier, who accused the US, China and Russia of making the world more dangerous by stoking mistrust and insecurity.

Secretary of State Mike Pompeo, on the other hand, had a much rosier view. "I'm happy to report that the death of the transatlantic alliance is grossly over exaggerated. The West is winning. We are collectively winning," Pompeo said in a speech at the conference.

This year's gathering focused on the divisions within the NATO alliance in the era of US President Donald Trump and Brexit.

Nicholas Burns is a former US ambassador to NATO. He's also an unpaid adviser to the Joe Biden campaign. Burns was at the conference and spoke to Marco Werman from Berlin.

"Donald Trump is considered by the German people to be less trustworthy than Vladimir Putin."

Marco Werman: So, Nick, I hear there's a new word in the diplomacy vocabulary. Westlessness, not restlessness, but Westlessness. What does it refer to?

Nicholas Burns: Marco, this is the most important global security conference held annually. World leaders flocked to it. The theme was, by the German organizers, "Westlessness," meaning the liberal countries have been dominant for 75 years since the end of the Second World War, and their contention is that the West is losing unity, that the West is badly divided. And if you did listen to President [Emmanuel] Macron of France, as I did, to President Steinmeier of Germany, to the foreign ministers of NATO allies, the tone was extremely negative. If you look at the public opinion polls, and this is very concerning, I'm in Germany today, Donald Trump is considered by the German people to be less trustworthy than Vladimir Putin. And so it was one of the most contentious meetings that I've attended. And as an American, obviously, you don't want to see your country criticized like this.

Related: NATO at 70: What's the future of the alliance?

Another point made by several European leaders is that the Trump administration withdrawing from the world stage has allowed Russia and China to occupy the void, but filling it with fear and mistrust. Pompeo does not appear to see that, though. What was he saying and what was the reaction to his somewhat contrarian point of view?

I think it was ill-advised of Sec. Pompeo to strike a pose that everything's fine. The New York Times headline was Pompeo says the West is winning, the West isn't buying it. The reaction in the room was stone cold silence. No applause. And everyone knows that this relationship between the US and Europe is filled with problems because we've withdrawn from the climate change agreement. We've withdrawn from the Iran agreement. Suddenly, the United States — which for 70 years has supported the European Union as a strategic partner — suddenly President Trump is depicting the European Union as some kind of hostile adversary to the United States, which is not true. And the administration has been so cool towards NATO, so overtly critical, that the mood in the room among the leaders from Europe was that this is the first time in seven decades where they think they can no longer count on the United States. And so for Sec. Pompeo to act as if there is no problem, that simply wasn't realistic. And the reaction, I think, was quite critical.

Related: What can the US learn from the conflicts in Syria and Afghanistan

So, Nick, last week you and I discussed troop reductions in Afghanistan. And since then, the US reached an agreement for a seven-day reduction in violence with the Taliban that could lead to a peace agreement, but there are not many more details. What else can you tell us about what this agreement is, where it stands? I mean, is there even a timeline?

It's difficult because the United States is trying to convince the Taliban to agree to a cease-fire to reduce violence. And that's a good first step. And I think that the Trump administration is right to do this. And there's a lot of support in Europe for it, because there are more than 40 countries, all the NATO countries and many countries beyond around the world — Japan, New Zealand, Australia — who have troops in and around Afghanistan. And so there's a lot riding on this.

But we are a long way from an agreement because the Taliban, of course, is an unpredictable, and, I think, irresponsible organization, untrustworthy. And so the administration is going to have to see if they can even keep to these agreements. And if they do, then the Taliban and the Afghan government — our partner of [President] Ashraf Ghani, and he was in Munich — they're going to have their own negotiation to see if they can agree on terms for peace. So it seems to me that an agreement is far into the future, a final agreement. But I do think the Trump administration is right to see if there's a possibility of drawing down American forces, as many as possible. But we have to do that, obviously, in a responsible way. And frankly, I think the Trump administration is getting high marks around the world for the careful way that it's proceeding.