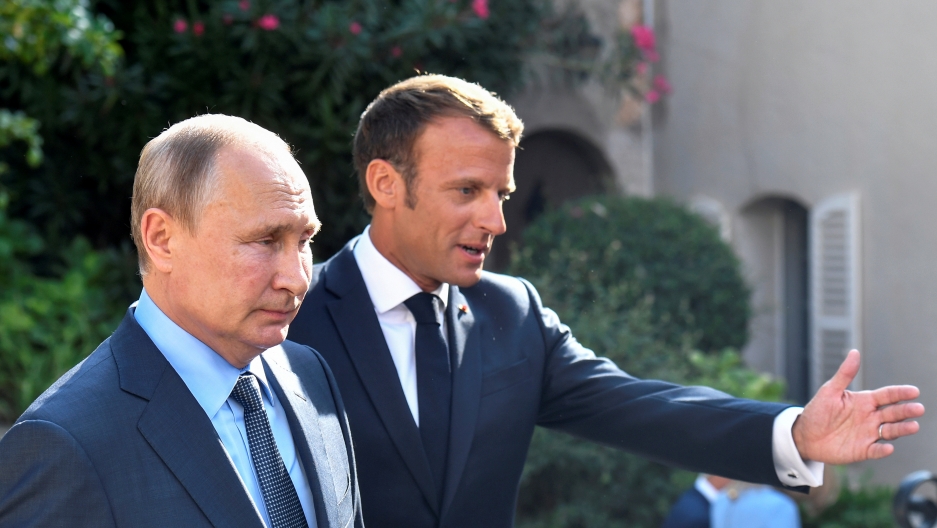 French President Emmanuel Macron welcomes Russia's President Vladimir Putin at his summer retreat of the Bregancon fortress on the Mediterranean coast, near the village of Bormes-les-Mimosas, southern France, on Aug. 19, 2019.

NATO leaders will hold their annual meeting in London on Dec. 3 and 4, and will be marking the alliance's 70th anniversary.

The North Atlantic Treaty Organization, which dates back to 1949, has faced its share of criticism. US President Donald Trump has been badgering alliance partners about burden-sharing since he was on the campaign trail. But French President Emmanuel Macron recently warned that it is the US that is "turning its back on us."

Related: How long can NATO survive without American leadership?

“What we are currently experiencing is the brain death of NATO,” Macron said in an interview with The Economist. (Turkey's President Recep Tayyip Erdoğan clapped back, telling Macron, “You should check whether you are brain dead.”)

But the French president raised existential questions about the value and purpose of NATO in 2019. He says he wants Europe to look after more of its own security, compromise with Russia, and re-focus NATO on fighting terrorism.

Gerard Araud, the French ambassador to the US from 2014 until June 2019, and Ivo Daalder, former US ambassador to NATO under President Barack Obama, spoke with The World's host Marco Werman about Macron's comments and the future of the alliance.

Gerard Araud: Well, you know, there has been a recurring debate about what is the use of NATO after the collapse of the Soviet Union. And we understand that for a lot of our allies, Russia is still a threat. But it's not a global threat, it's not an existential threat. And it's difficult to say that we have NATO only against Russia, especially in the south. And that's an ongoing debate between the south and the east. In the south, NATO countries are really feeling the heat coming from the south via Syria or via Libya or via terrorism. So in a sense, it's a way of a wakeup call, Macron telling the allies, "Well, wait a minute. We should take care of all the threats that Europe is facing."

Last week at a press conference in Paris alongside NATO Secretary-General Jens Stoltenberg, President Macron said NATO must focus on big strategic questions at the summit. What is Macron's vision for NATO?

Well, you know, what is striking today is, is not that the US is leaving NATO or the military guarantee of the US is not something that we can rely on. It's simply that the US — and with Obama and Trump — is telling us, "We are not going to be the policeman of the world." And all the threats ... are on the periphery of Europe — in Ukraine, in Syria, or in Libya, where the Americans don't want to act. So in a sense, for Macron, Macron is telling the allies, "Really, we have to adjust to this new American posture. We have to take care of our security by ourselves."

It is Emmanuel Macron pro-Russia, and does Putin see him as an ally?

It doesn't make sense, you know, really to say "pro-Russia." It's simply to say, you know, Russia is there. We don't like its policy. But diplomacy is talking to our enemies, our adversaries. So we have to talk to Russia and to try to see whether a compromise is possible with Russia. And that's the reason why Macron has organized the summit on Ukraine with Germany and Russia and Ukraine in Paris on Dec. 9. It would be a good way of testing the Russians, whether they are looking for an acceptable compromise.

Ivo Daalder, President Macron says he wants NATO to reenvision itself and refocus its priorities on real existential threats like ISIS, not Russia. Do you agree?

Ivo Daalder: Well, I think NATO has re-prioritized its threats since the end of the Cold War. Clearly, Russia isn't the same kind of threat that the Soviet Union was during the Cold War. But it is still a significant political and indeed military challenge. In Ukraine, it has invaded the country, annexed part of it. It has large military forces that it exercises on NATO's borders on a regular basis. And, of course, it retains a large nuclear arsenal that is pointed at Europe and at the United States.

Well, a central pillar for the French, as we just heard, is to try to find some compromise with Russia. How would that work? Does that seem reasonable to you?

Well, I don't have a problem with NATO, the United States, France, individual countries and collectively engaging with Russia. As Ambassador Araud said, you talk to your enemies and to your adversaries, not just to your friends. So that makes eminent sense, but I'm not sure what the deal is that we're trying to achieve. If the deal is a deal with Russia that leads to the dissolution of NATO, it's not a deal that any other country is going to sign up to. Certainly not the United States, certainly not Germany, which is where I am right now, or any of our other allies. They do see Russia as a threat, as a challenge to their security. And indeed, I think most people, even in France, think that Russia is a threat that is best dealt with collectively, which is what NATO does rather than individually.

Related: NATO agreed Georgia would join. Why hasn't it happened?

So you would say right now, no compromise with Russia?

No, I think we could have a negotiation on arms control. I would encourage us to reengage on that. And indeed, if we could find a way out of the Ukraine mess, which leads to Russia to withdraw completely from Ukraine, to withdraw from Crimea, then one deal is that the sanctions that were imposed would be lifted. So there is much to talk about with the Russians, but it doesn't mean that you are trying to trade NATO or its membership for a dialog with Russia. That's just not in the cards.

As you said, Ambassador Daalder, you're in Germany. What is the sense that Chancellor Merkel is on the same page with Macron about NATO, or does she see Putin in a different light from Macron?

I do think that the Germans have a very different view. One, NATO is a pillar of the foreign and security policy of Germany — has been for 70 years, will continue to be in the future. And she was quite clear that the kind of language that came from President Macron that talked about NATO being brain dead was unfortunate and something she didn't share. She also has, I think, a view of Putin as a wily character who is out there to undermine the unity of the alliance, who is affecting the security situation in Eastern Europe, and believes that NATO and NATO members, including Germany, including France, have a responsibility to counter that challenge by being clear that NATO stands united in the defense of its territory.

With the 70th anniversary of NATO, what would you say is the value and purpose of the organization in 2019?

I think the value and purpose is what it has long been: to bring together a community of democracies, people who share key values and key interests with regard to how they defend themselves. To do so not only as a negative defensive force vis a vis the threats that they face, but also as a positive force to bring stability and peace not only to the countries that are members of NATO, but to its immediate neighborhood.

These interviews have been edited and condensed for clarity.