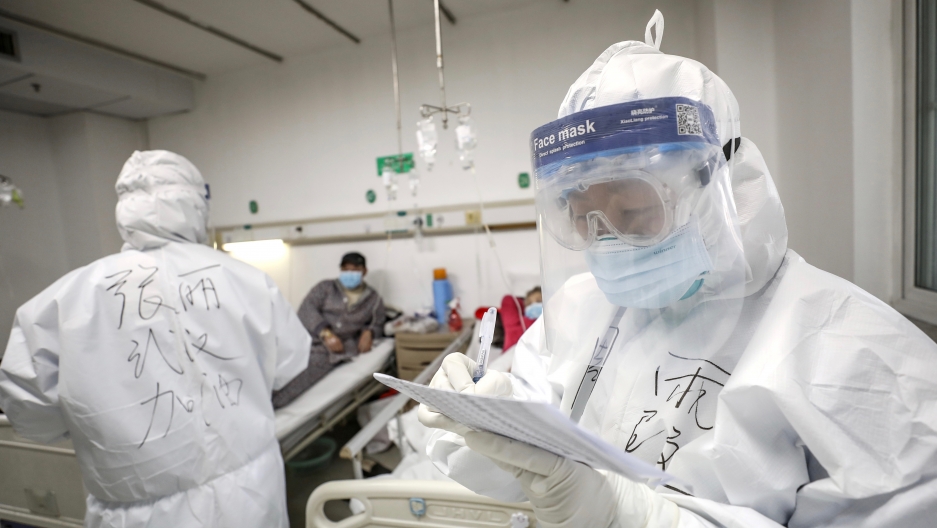 A medical worker in protective suit checks a patient's records at Jinyintan hospital in Wuhan, the epicentre of the novel coronavirus outbreak, in Hubei province, China, Feb. 13, 2020.

Most of the new diseases we humans have faced in the past several decades have come from animals.

HIV. Avian flu. Ebola. SARS. And now the new coronavirus, which scientists say likely came from an animal, possibly a bat, at a market where live animals are butchered in the Chinese city of Wuhan.

The more we come into contact with wild animals, the more we risk a so-called disease “spillover” from animals to humans.

That’s true in markets like the one in Wuhan, but also out in the wild, where deforestation and land use changes have been linked to outbreaks of new emerging diseases.

“As people move and wildlife move in response to a changing environment, humans and wildlife and animals will come in contact more regularly.”

“As people move and wildlife move in response to a changing environment, humans and wildlife and animals will come in contact more regularly,” said Jeanne Fair from the Los Alamos National Laboratory in New Mexico.

“Everything is sort of shifting and will shift into the future as the environment changes through climate change,” Fair said.

Scientists, including climatologists and epidemiologists on Fair’s team at Los Alamos, are beginning to model how changes to the climate will impact the spread of infectious diseases.

It’s the early days for this kind of research, but previous studies suggest that extreme weather has already played a role in at least one outbreak. Scientists say drought and deforestation combined to force bats out of rainforests and into orchards in Malaysia to find food. Those bats, a common disease reservoir, then passed the Nipah virus through pigs to humans for the first time in the late 1990s.

“We’re going by the past data to really predict what’s going to happen in the future,” Fair said. “And so, anytime you increase that wildlife-human interface, that’s sort of an emerging disease hot spot. And so, that’s just increasing as we go forward.”

Much of the early research linking climate change and infectious disease looks at the expansion of habitats for disease hosts, like bats.

Disease ecologist Gerardo Martín at Juárez University in the State of Durango in Mexico found warmer temperatures under climate change might impact the transmission of the Hendra virus, which has killed four people since passing from bats to horses to people for the first time in Australia in 1994.

Martín’s models showed that warmer temperatures would expand the habitat for black flying foxes, a type of bat that carries the Hendra virus, southward along Australia’s eastern coast. That expansion of habitat, which Martín calls “a very widespread phenomenon that is occuring as a result of climate change,” would bring those bats into contact with roughly double the number of horses.

“Climate change will increase the opportunities for Hendra virus spillover to horses, and that’s how we infer that spillover to people might be more frequent.”

“Climate change will increase the opportunities for Hendra virus spillover to horses,” Martín told The World, “and that’s how we infer that spillover to people might be more frequent.”

Might, but not will. Climate change and infectious disease transmission both depend on so many variables, and Martín said his research alone can’t predict whether more people would actually get sick from the Hendra virus in a warmer world.

“That is a very difficult question to answer,” Martín said.

Related: Semi-quarantined: Living with the coronavirus outbreak in Hong Kong

More research has been done on how climate change might impact more widespread mosquito-borne illnesses.

As temperatures warm, habitats for the mosquitoes that carry dengue, chikungunya, Zika and malaria are expanding.

World Health Organization modeling suggests that if the globe warms 2 to 3 degrees Celsius, several hundred million more people could be at risk of getting malaria.

“There are places up the mountain slopes where there are villages and people living … that don’t have malaria simply because the temperatures are too cold for the malaria vectors to really go about their business and do anything,” Shaman said. “As it warms, those populations are going to be put at risk.”

Shaman argues we don’t know yet whether climate change will cause a net increase in infectious disease rates globally. While mosquito habitats will expand in some parts of the world, they might contract elsewhere, like the increasingly arid Sahel region in Africa.

Shaman says what we know for certain about climate change is that it will make it harder to predict where disease outbreaks will pop up.

“Because climate is one of the things that influences infectious diseases, if we disrupt their patterns of transmission, it is much more difficult for us to contend with it.”

“Because climate is one of the things that influences infectious diseases, if we disrupt their patterns of transmission, it is much more difficult for us to contend with it,” Shaman said.

“And that disruption makes it much harder to keep people healthy because the resources are in the wrong place,” Shaman said. “And populations that have never had to contend with a certain disease are suddenly having to.”

It’s far too early to know how climate change may or may not impact this new coronavirus spreading around the globe.

But Fair from Los Alamos is so far impressed with the global health response to it.

“It’s been quite amazing to watch,” she said. “But this is going to be something that we’ll need to get good at because these [outbreaks] will continue to keep happening.”