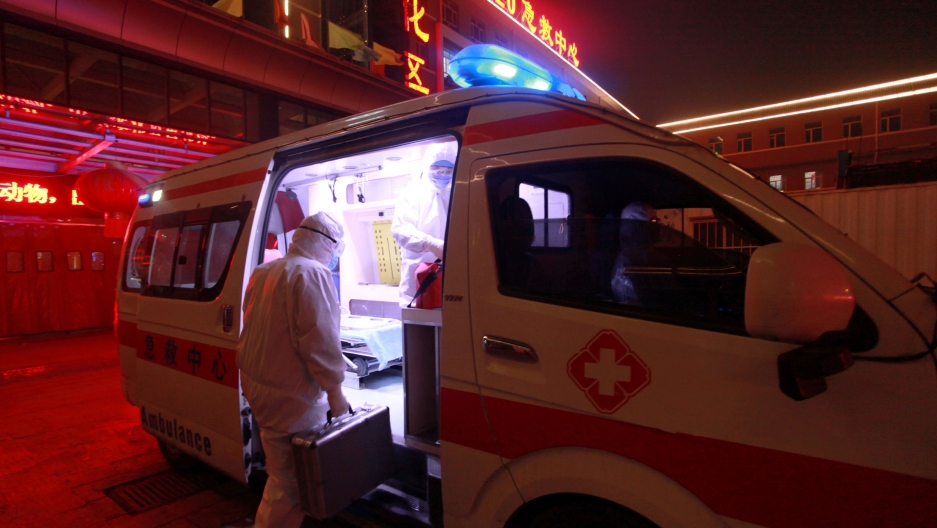 A medical worker in protective suit gets onto an ambulance at a hospital in Zhangjiakou, China, Feb. 13, 2020.

Health workers in China on the front lines of caring for patients infected with Covid-19 are paying a heavy toll with more than 1,700 cases of staff with the coronavirus according to Chinese authorities.

The Chinese health commission vice minister, Zeng Yixin, said 1,716 health workers had been infected with the new coronavirus and six had died as of Tuesday, with the number of infected staff rising.

"The duties of medical workers at the front are indeed extremely heavy; their working and resting circumstances are limited, the psychological pressures are great, and the risk of infection is high," Zeng told a news conference.

Chinese officials reported on Friday more than 5,000 new cases in the country, including more than 120 deaths.

Policymakers pledged to do more to stimulate economies hit by the virus, helping Asian stock markets edge higher, with Chinese shares headed for their first weekly gain in four.

China's National Health Commission said it had recorded 121 new deaths and 5,090 new coronavirus cases on the mainland on Thursday, taking the total number of infected to 63,851.

Some 55,748 people are being treated, while 1,380 people have died of the virus that emerged in December in Wuhan, capital of the central province of Hubei.

The latest toll takes account of some deaths that had been double counted in Hubei, the commission said.

Chinese officials and hospitals have repeatedly spoken of a shortage of protective equipment, including face masks.

The new figures for total infections gave no sign the outbreak was nearing a peak, said Adam Kamradt-Scott, an infectious diseases expert at the Centre for International Security Studies at the University of Sydney.

"While the Chinese authorities are doing their best to prevent the spread of the coronavirus, the fairly drastic measures they have implemented to date would appear to have been too little, too late," he said.

While the vast majority of infections and deaths have been in China, in particular Hubei, there have been nearly 450 cases in some 24 countries and territories outside mainland China, and three deaths.

Japan confirmed its first coronavirus death on Thursday — a woman in her 80s living in Kanagawa, near Tokyo. One person has died in Hong Kong and one in the Philippines.

The biggest cluster of infections outside China has been on a cruise liner quarantined in a Japanese port, with 218 people on board confirmed as infected and taken off to hospital.

On Friday, some of the ship's passengers were allowed to disembark — with priority for older passengers confined to windowless cabins — and complete their quarantine on shore.

There was good news for passengers on another cruise ship that was finally allowed to dock in Cambodia after being rejected by five countries over fears of the virus, even though no cases were reported on board.

The MS Westerdam, carrying 1,455 passengers and 802 crew, docked in Sihanoukville port late on Thursday. It had anchored offshore earlier to allow Cambodian officials to board and collect samples from passengers with any signs of illness.

Prime Minister Hun Sen greeted the passengers with handshakes and bouquets as they stepped off the ship and boarded a bus.

"My wife and I gave him some chocolates as a show of our appreciation," Lou Poandel, a tourist from New Jersey, told Reuters after meeting the Cambodian leader.

Separately, Royal Caribbean Cruises said it had canceled 18 cruises in southeast Asia and joined larger rival Carnival in warning that its full-year earnings would be hit by the coronavirus outbreak.

In Singapore, which reported its biggest jump in cases to date on Thursday — up eight to 58 — authorities were scrambling to find "patient zero" — the person who carried the disease into a company meeting last month, setting off a chain of infections linked to five other countries.

A surge in China's reported cases on Thursday reflected a decision by authorities to reclassify suspected cases as confirmed by using patients' chest scans, and did not indicate a wider epidemic, the World Health Organization said.

"This is not a sign that the outbreak is suddenly exploding," said WHO official Simeon Bennett. "We see no significant change in the trajectory of the outbreak."

Economists are scaling back growth expectations for the world's second-largest economy as they assess the impact of the outbreak.

China will grow at its slowest rate since the global financial crisis this quarter, according to a Reuters poll of economists who said the downturn would be short-lived if the outbreak was contained.

The UN's International Civil Aviation Organization forecast global airline revenue could fall by $4 billion to $5 billion in the first quarter due to cancellations linked to the outbreak.