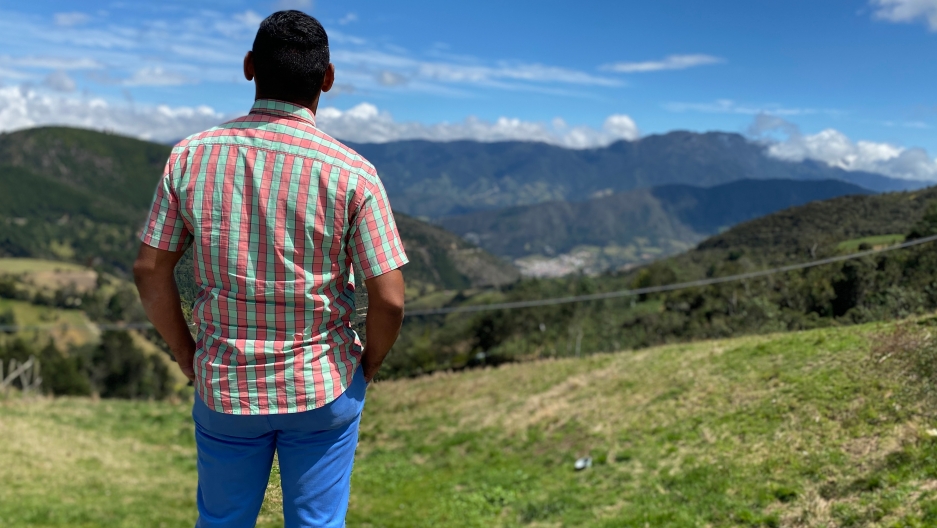 Yomalf Chavez Lugo, a former member of Venezuela's presidential guard, observes the Colombian city of Pamplona, Feb. 1, 2020. Lugo says he has joined a group that is plotting to overthrow the Venezuelan government.

Sgt. Pedro Elias Ruiz crossed into Colombia in the middle of the night carrying a small backpack and wearing civilian clothes.

In February 2019, Ruiz hoped to join hundreds of his comrades who had defected from the Venezuelan military to join opposition leader Juan Guaidó in his mission to oust socialist President Nicolás Maduro and “bring democracy back” to Venezuela.

Related: Venezuela’s ex-military deserted Maduro hoping for a revolution. Now they’re on the brink of homelessness.

The charismatic politician was calling on the nation’s military to abandon the Maduro regime, which critics have described as a dictatorship. But a year has passed since Ruiz defected, and Maduro is still firmly in control. Ruiz now feels like he gambled his career away.

“I let my emotions get the best of me. ... We thought our skills were going to be put to use in some sort of civilian and military coalition. We thought we were going to take humanitarian aid into Venezuela. But nothing happened."

“I let my emotions get the best of me,” he said in a phone interview from the Colombian city of Ibagué, where he now works for a landscaping company earning the minimum wage. “We thought our skills were going to be put to use in some sort of civilian and military coalition. We thought we were going to take humanitarian aid into Venezuela. But nothing happened.”

A year since Guaidó invoked Venezuela’s constitution to proclaim the presidency for himself, his ambitious campaign to oust Maduro — including economic sanctions, a coup attempt and dozens of protests — has stalled.

Related: Chávez’s revolutionaries caught between legacy and change in Venezuela

The United States and more than 50 countries continue to recognize Guaidó as Venezuela’s “interim president” — Guaidó recently visited the White House and was saluted by Donald Trump at the State of the Union — but efforts to remove Maduro have failed, and the Venezuelan people continue to pay the price.

Related: The US has renewed its support for Venezuela's opposition. What does it mean?

Among those affected are an estimated 1,400 soldiers who defected from Venezuela’s military last year.

Most now stay in Colombia, where they struggle to make a living. Some of the defectors are still plotting to overthrow Maduro and have become uncomfortable guests.

“Colombia cannot send these soldiers back to Venezuela, because they can be tortured there or killed. ... But Colombia can’t allow them to be here plotting coups either."

“Colombia cannot send these soldiers back to Venezuela because they can be tortured there or killed,” said Ronal Rodríguez, an international relations professor at Bogotá’s Rosario University.  “But Colombia can’t allow them to be here plotting coups either,” he said — because that could further inflame tensions between both countries.

Maduro broke off diplomatic ties with Colombia a year ago after its government sided with Guaidó and allowed him to use Colombia as a staging ground for pushing aid trucks into Venezuela. That’s when hundreds of Venezuelan soldiers — stationed on the border to stop the aid trucks — defected. 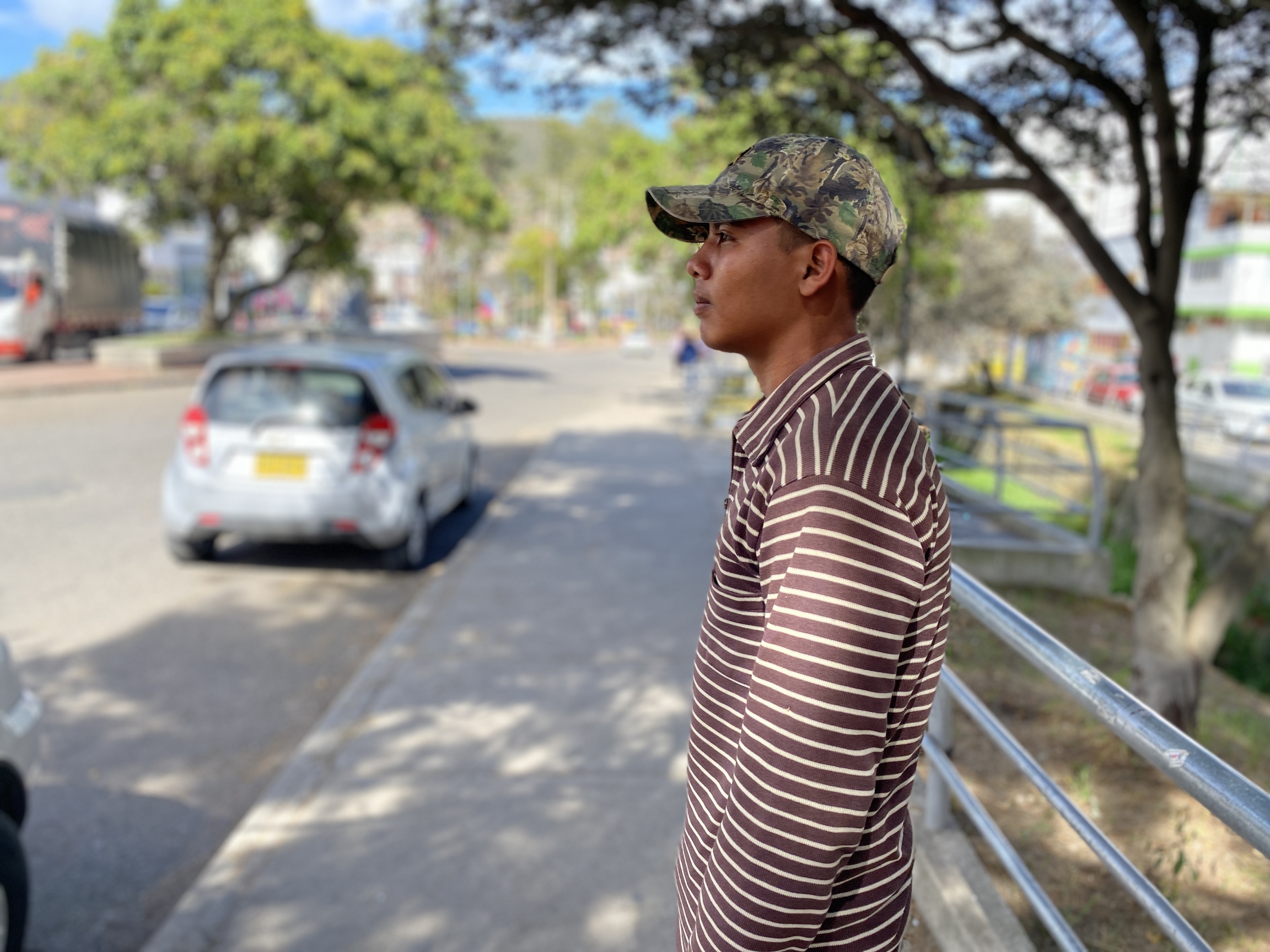 Alexander Tiapa Maita, a former Venezuelan soldier who defected in April last year, takes a break in Pamplona, Colombia, where he works as a gardener.

Colombia’s government housed the defectors in hotel rooms until May last year, when they took their weapons and urged them to behave as civilians.

Then, as funding for hotel rooms dried out, defectors were handed temporary residence permits, and a stipend of approximately $150, Ruiz said, so that they could begin new lives in Colombia.

Related: 'I get screamed at in the streets': Colombia's patience with Venezuelan migrants wears thin

But some of the defectors say that they are still eager to go back home, and have become involved in plots to overthrow Venezuela’s government.

Yomalf Chavez Lugo, a former member of Venezuela’s presidential guard, said he is now part of a group called Operation 2020 that seeks to take over military garrisons in Venezuela and arrest Maduro.

Lugo currently lives in the city of Pamplona, just 50 miles from the border with Venezuela. He claims that there are more than 4,000 men who are willing to participate in this plot, including 80 defectors in Colombia. 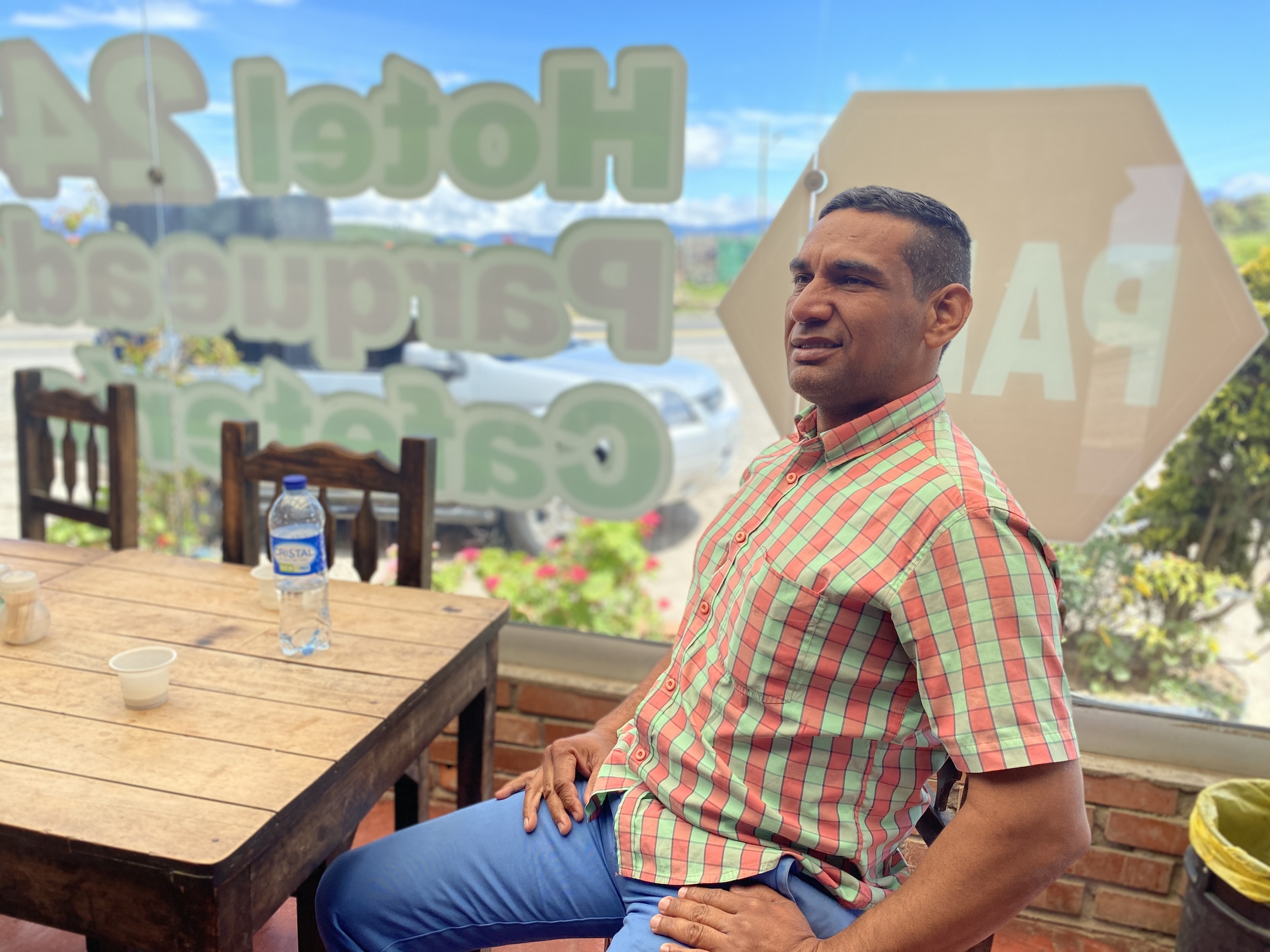 Yomalf Chavez Lugo has a drink in the outskirts of the Colombian city of Pamplona, Feb. 1 2020. Lugo says he has joined a group that is plotting to overthrow the Venezuelan government.

Eddier Rodriguez, a former army sergeant who came to Colombia four years ago, said he is involved in another coalition that had planned to take over garrisons in Venezuela in December last year, but canceled their attack because an informant ratted them out. He says that his group has 2,000 men who are ready to act, some in Venezuela and others in Colombia.

“We have tried to reach out to Guaidó to get resources,” he said. “But unfortunately, we have not had any response from his people.”

It’s hard to assess how serious these plots are, or if they actually pose a threat to the Maduro government. But the socialist leader has been recently shaken by military rebellions.

In April 2019, a group of officers freed a senior opposition leader from house arrest and attempted to take over an air force base in Caracas as Guaidó took to social media and recorded a video in which he asked soldiers around the country to rebel. Venezuela’s intelligence chief was involved in the uprising and fled to the US after it was quashed by pro-Maduro forces.

In December, a group of about a dozen rebels led by a rogue National Guard officer launched an attack on a military base in the south of Venezuela and stole weapons that were later recovered by the government. A soldier died in the attack.

Geoff Ramsey, director of the Venezuela program at the Washington Office on Latin America, said that early last year, there were high hopes among opposition leaders that Venezuela’s military leaders would turn on Maduro. The US had imposed sanctions on Venezuelan oil exports, which sought to starve the regime of funds. And Guaidó was revving up large crowds as he traveled throughout the country promising new elections.

But high-ranking generals who command troops — and who have the most to lose in a transition — have stuck with Maduro. And the Venezuelan government has found ways to get around US sanctions that include exporting large amounts of gold to Turkey and trading oil with Russia.

This has helped Maduro stay in power and left Guaidó in a difficult spot: “He is caught between rival factions of his coalition,” Ramsey said. “You have the pragmatists that understand that any transition will have to be negotiated. And on the other hand, you have the radicals that are pushing for an invasion and some kind of potential military option.”

As the political stalemate in Venezuela drags on, soldiers who defected last year struggle to get by. Many live in poverty, like hundreds of thousands of Venezuelan migrants who have arrived in Colombia recently. 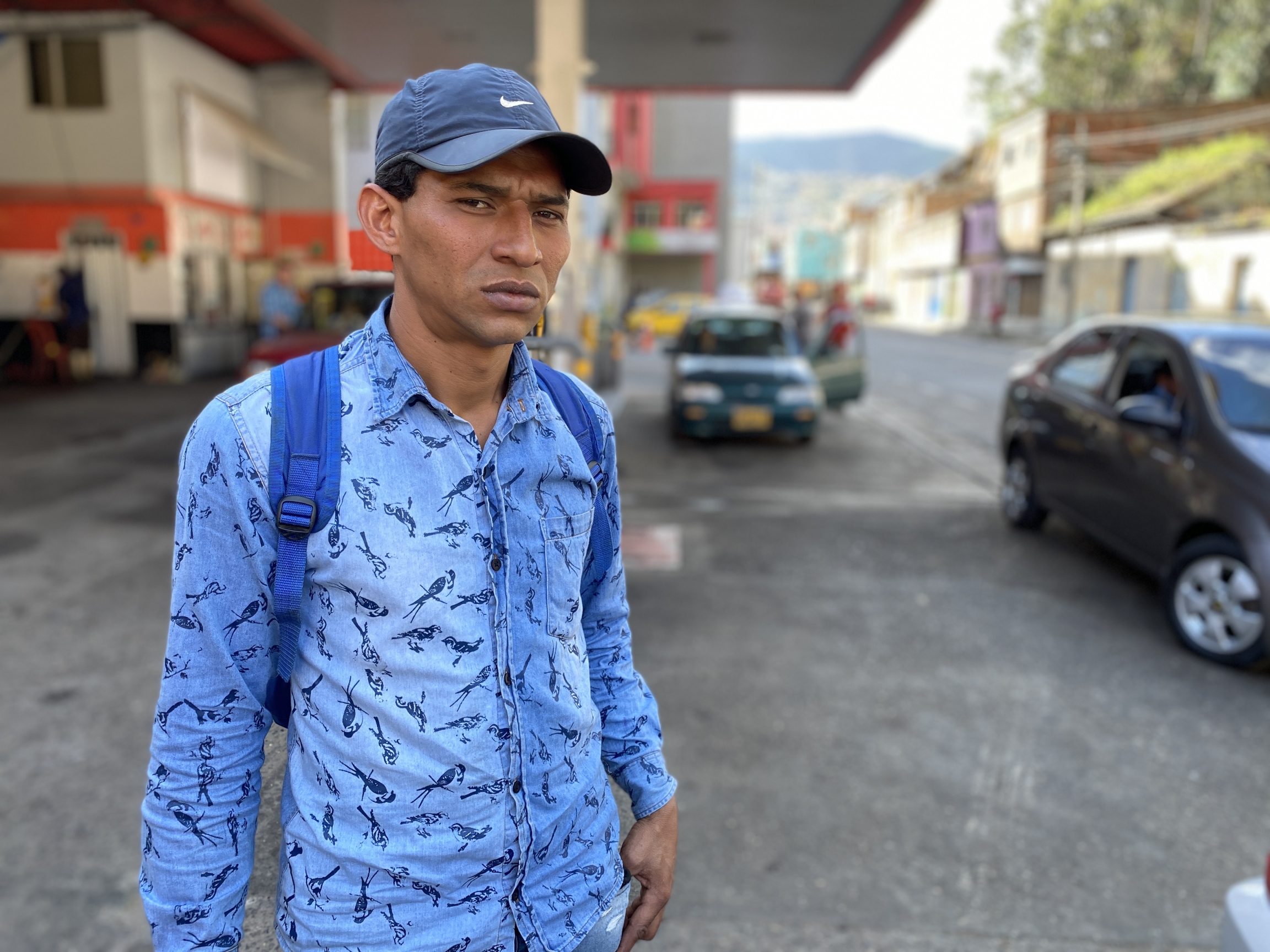 Former Venezuelan army Sgt. Javier Rivas poses for a photo in Pamplona, Colombia, Feb. 1, 2020. Rivas says he defected from the Venezuelan army because he no longer wanted to follow orders, which included harassing opposition politicians.

Former Venezuelan army Sgt. Javier Rivas said he has struggled to find work. He sells lemons in the streets of Pamplona to gather some cash and lives with his family in a room that he rents for about $70 per month.

“I left Venezuela because I no longer wanted to follow the army’s orders. ... But here, Guaidó didn’t give us any support.”

“I left Venezuela because I no longer wanted to follow the army’s orders,” said Rivas, 32. “But here, Guaidó didn’t give us any support.”

Sergeant Ruiz, who now trims trees that get in the way of power lines, said there have been some positives to leaving Venezuela — mostly relief from not having to live in a country with food and medicine shortages.

But he’s also nostalgic about his days in the Venezuelan National Guard.

“In Venezuela, I was doing what I loved,” he said. “If there is a chance to go back and fight for my country, I would return with my eyes closed.”