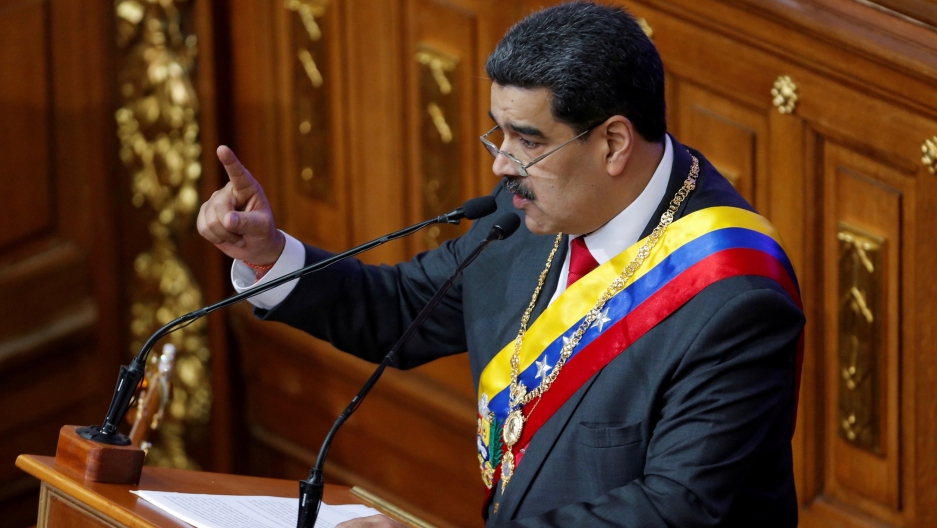 Venezuela's disputed President Nicolás Maduro gestures as he speaks during a special session of the National Constituent Assembly to deliver his annual state of the nation speech, in Caracas, Venezuela, Jan. 14, 2020.

A year after the United States attempted to deliver truckloads of aid to relieve the humanitarian situation in Venezuela, prompting warnings of the politicization of aid, Washington is renewing its support to the country’s embattled opposition.

But after an attempted uprising in April by members of the military who backed opposition leader Juan Guaidó and violent clampdowns and arrests of his supporters by government and paramilitary forces, disputed President Nicolás Maduro shows little sign of stepping aside.

Related: Meet the woman who buries forgotten migrants from Venezuela

President Donald Trump welcomed Guaidó at the State of the Union speech Tuesday, while other members of Venezuela’s National Assembly lobbied at the United Nations European headquarters in Geneva with the support of Washington.

“We have an active crisis now, which is a political crisis that needs to be addressed. For all of us in Geneva, if you care about humanitarian and human rights issues, now is the time that we can help people in Venezuela to address this crisis.”

“We have an active crisis now, which is a political crisis that needs to be addressed,” Andrew Bremberg, US ambassador to the UN and international organizations in Geneva, said at a press conference with two representatives of the opposition. “For all of us in Geneva, if you care about humanitarian and human rights issues, now is the time that we can help people in Venezuela to address this crisis.”

Bremberg, who previously served as an assistant to Trump and director of the Domestic Policy Council to Trump, called for “free and fair” parliamentary and presidential elections, increased sanctions against the Maduro regime, and an end to support from Cuba, Russia and China to Caracas.

This week, Reuters and The New York Times reported that a senior US official claimed the US may impose sanctions on Russia’s state oil company Rosneft and other oil companies trading with Venezuela.

Humanitarian crisis at the forefront

It is estimated that over 4.6 million Venezuelans — some 14% of the population — have so far emigrated since 2015, including a growing number leaving due to limited access to food and medicine, and power outages and water shortages. The IOM, or the International Organization for Migration, and UNHCR, the UN Refugee Agency, say that by the end of 2020, the number of Venezuelans fleeing the country could reach 6.5 million.

Julio Castro, a physician at the medical school at the Central University of Venezuela and a technical adviser to the National Assembly, said patients are dying in hospitals due to electricity cuts, while those who are sick often have to choose between food and medicine due to the economic collapse.

He said funds for humanitarian aid are only 15% of what is needed, and much of the medical staff has left the country. While the United Nations and International Committee of the Red Cross and its partner, the International Federation of Red Cross and Red Crescent Societies, negotiated an agreement with the government last year to deliver more assistance, its distribution is often selective, according to political allegiance.

“Humanitarian assistance is going to the government’s hospitals. Beyond that, there is nothing.”

“Humanitarian assistance is going to the government’s hospitals. Beyond that, there is nothing,” he said. He met with officials at the World Health Organization and ICRC to remind them of the dire situation and the need for additional help.

A year ago, when the United States attempted to deliver tons of humanitarian aid to Venezuela from Colombia, the move was criticized by the UN and aid groups for politicizing international assistance.

But when asked if there were risks in associating too closely with the United States, a representative of a nongovernmental organization working with elderly Venezuelans in need who was part of the recent group in Geneva, said this has to be taken in the context of the crisis.

“It worries me a lot. But what worries me even more is that people are continuing to die. We have decided to assume the ‘costs’ that would allow us to mitigate those costs which translate in lives of people.”

“It worries me a lot,” Francelia Ruiz, project director at Convite, said. “But what worries me even more is that people are continuing to die. We have decided to assume the ‘costs’ that would allow us to mitigate those costs which translate in lives of people.”

A year after Guaidó led massive, nationwide protests against Maduro in Caracas and other cities, there are increasing signs of frustration that change has not occurred.

Guaidó’s authority had also been challenged when an opposing faction in the National Assembly held a vote on the institution’s presidency as Guaidó was blocked by security forces from entering the building. He set up a parallel parliament with US backing.

With many sensing that support from his main foreign backers — particularly the US — was fading, the opposition leader traveled to several key Western capitals in an effort to reignite support.

“The only hope is to line up the international community,” said Christopher Sabatini, a senior fellow for Latin America at Chatham House in London.

Sabatini believes Trump’s policy toward Venezuela was initially too forceful. “Unfortunately, [former national security adviser John] Bolton and the administration really doubled down too quickly on Juan Guaidó [after he proclaimed himself president] and on sanctions.” Sanctions should have been coordinated with other countries “to incentivize a meaningful human rights-based mediation process.”

Guaidó visited leaders in London, Brussels, Madrid and Ottawa before traveling to the US to mobilize support.

Related: Lebanon becomes a refuge for Venezuelans of Lebanese descent

But political dynamics in those countries as in Latin America have shifted. The Lima Group of countries, formed by 17 Central and South American states and Canada to find a peaceful solution to the Venezuela crisis, is less unified than a year ago. In January, the new Argentinian government under President Alberto Fernández said it no longer recognized Guaidó as Venezuela’s interim president, while Mexico’s President Andrés Manuel López Obrador has refused to recognize Guaidó since coming to office.

While the Venezuelan opposition may be looking to expand its international support base, the renewed US interest in Venezuela comes nine months ahead of the November presidential election, during which Trump may see certain benefits in embracing Guaidó. Conservative Latino voters, including Cuban and Venezuelan former migrant families, may be driven to vote for Trump as he fights Maduro and his Cuban and Russian backers.

“It is also personal, with Trump opining about Maduro and taking clear, strident positions on Venezuela. It may be difficult for him to climb down from there.”

But for Sabatini, “It is also personal, with Trump opining about Maduro and taking clear, strident positions on Venezuela. It may be difficult for him to climb down from there.”

The administration has publicly maintained that the only issue for negotiations is when Maduro would leave office. Secret talks were however held between US officials and the Maduro regime, and Washington has discussed military options.

Nonetheless, there may be a realization in Washington that time has allowed Maduro to consolidate his regime, at the expense of the opposition.

“The US is becoming anxious that the window of opportunity is closing in. The additional time does not work in favor of Guaidó. With additional time, Guaidó appears to not be able to force an endgame,” explained Eric Farnsworth, a former State Department official and vice president of the Council of the Americas.

On Friday, Maduro was expected to meet with Russian Foreign Minister Sergei Lavrov in Caracas, part of the veteran diplomat’s three-day visit to Latin America.