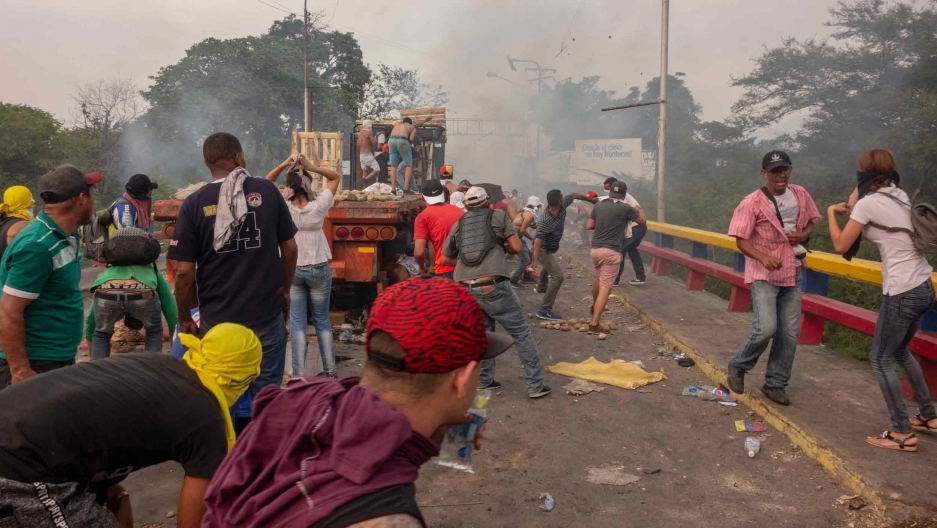 Chaos breaks out at the Francisco de Paula Santander Bridge as volunteers intending to carry aid across the border into Venezuela clash with Venezuelan security forces, Feb. 23, 2019, Cúcuta, Colombia.

Triumphant volunteers sat atop trucks full of humanitarian aid staged at Tienditas Bridge at the Colombian-Venezuelan border on Saturday morning.

Hundreds waved Venezuela’s tricolor flag and chanted that the last days of Nicolás Maduro had come.

“It is a matter of hours,” announced a confident opposition member, Ismael Garcia, as Colombian police struggled to hold back the energetic crowds. “Maduro is on his way out!”

By mid-afternoon, though, the optimism had died.

Three aid trucks had made it into Venezuela but were forced back by security forces at the Francisco de Paula Santander Bridge. Two were torched, reportedly by the Venezuelan National Guard, and quickly enveloped the bridge in smoke from which bloodied and disoriented protesters hobbled out.

By day’s end, violent clashes with Venezuelan security forces left 285 injured — and nothing made it into Venezuela.

“Actually, everyone lost. ... The only winner was the war party. This takes us closer to an armed confrontation.”

“Actually, everyone lost,” said Phil Gunson, a Caracas-based senior analyst with the International Crisis Group. “The only winner was the war party. This takes us closer to an armed confrontation.” 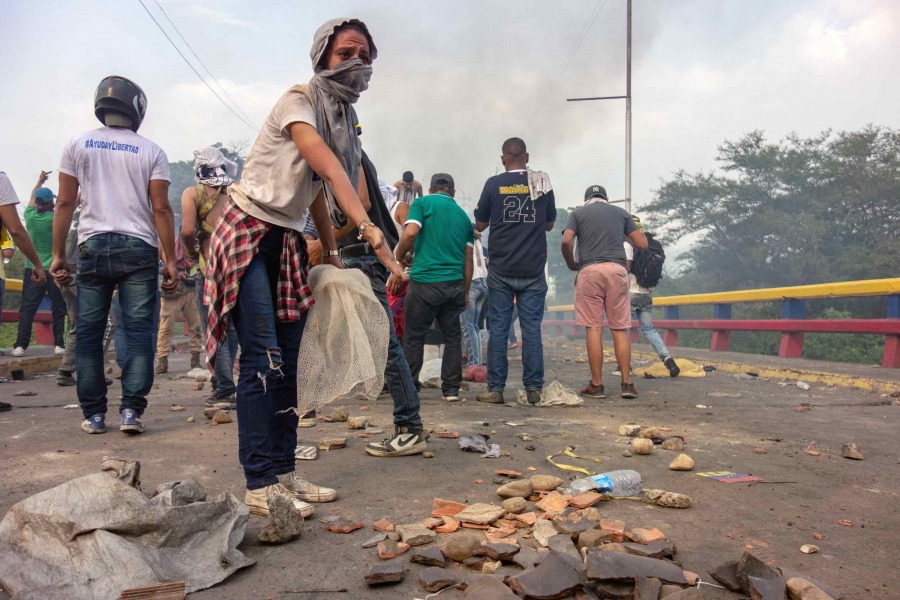 At the Tienditas Bridge, protesters arrived in the early hours of the morning to assemble. They planned to march over the bridge and dislodge the shipping containers and oil tanker that the military had placed as a makeshift blockade three weeks earlier.

Many dressed in white, like the women who broke peacefully through a closed border in 2016, ready to take action. But once they arrived, they barely moved. The orders from volunteers organizing the crowds were to stay put.

“Where is Guaidó?” asked a confused young woman in the impatient and puzzled crowd.

Many who arrived at the bridge had camped overnight after attending a pop concert the day before to raise aid for Venezuela.

The aid the volunteers hoped to carry over the bridges has become a flashpoint in Venezuela’s political crisis.

The aid the volunteers hoped to carry over the bridges has become a flashpoint in Venezuela’s political crisis. Maduro, with the backing of the military, sought to keep it out of the country. Meanwhile, opposition leader Juan Guaidó, used the opportunity to force a dilemma upon the Venezuelan military.

Guaidó, who declared himself president on Jan. 23, appears to have achieved the impossible — he revived a political opposition previously thought to be dead and drew thousands to the streets to support a cause almost lost.

But on Saturday, he was nowhere to be seen at the border crossings.

So the volunteers awaited orders. Carlos Molina Tamayo, a former admiral in the Venezuelan navy who took part in the failed coup on Huge Chavez in 2002, took to a stage.

“It will take some days, we have to be patient,” he pleaded to the crowd, reportedly under orders from Guaidó. “We are unarmed … we aren’t going to get ourselves killed.”

Feeling the timing was opportune, the crowd did not like being told to wait.

“People are already being killed, Venezuelan is at war,” interjected an angry protester leading the line. “Now is the moment!”

Disagreements broke out in the crowd.

“We will not lead our fellow countryman to the slaughterhouse,” said one volunteer organizing the protests. And just a few kilometers away, at the two other border crossings, it had all gone horribly wrong.

“Maduro has thousands of armed guards, we just have stones,” said a young woman who staggered away from the Francisco de Paula Santander Bridge in a makeshift bandana as a limp man behind her was carried to the first aid tent.

Tear gas canisters and rubber bullets were shot at protesters who hurled rocks. Gunfire echoed across the bridge.

According to Colombia’s migration authorities, 285 people were injured in the chaos, mostly from tear gas, and they announced the border would be closed for the next two days to inspect the damage. Similar scenes to those at the Francisco de Paula Santander Bridge were reported at the other crossing, Simon Bolívar.

At Venezuela’s southern limit with Brazil, one of three countries working to push aid across the border, two were killed and another 31 injured when the military opened fire on members of an Indigenous community.

Maduro announced he would be cutting the few diplomatic ties that remained with Bogotá, giving diplomats 24 hours to leave Caracas. 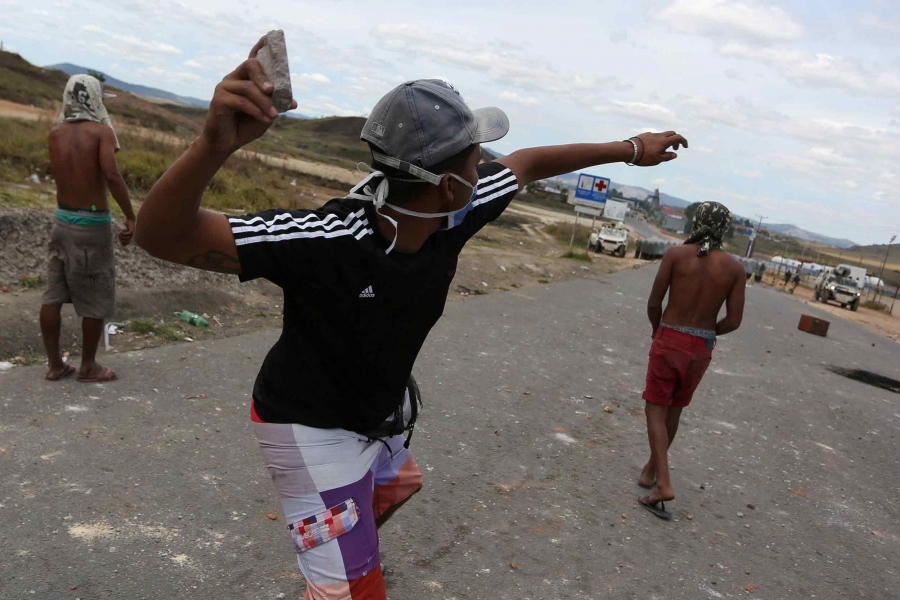 A man throws stones at Venezuelan National Guards at the Venezuela-Brazil border, as seen from Pacaraima, Brazil, Feb. 24, 2019.

Saturday evening, opposition members sat in somber silence on sofas in a local hotel lobby in Cúcuta — an informal base of operations in recent weeks — re-watching the scenes on international TV stations.

Opposition leaders didn’t anticipate any aid would destroyed. The decision to set a truck on fire (widely reported by the Venezuelan military) surprised them.

But the humanitarian aid plan was fraught with complications from the very beginning.

“Everyone who is concerned about humanity should be worried about this situation. But so far our voice has gone unheard. ... The people are being used as a political tool. When someone is desperate they are ready to do anything.”

“Everyone who is concerned about humanity should be worried about this situation. But so far our voice has gone unheard,” Francesco Rocca, president of the International Red Cross, told The World. “The people are being used as a political tool. When someone is desperate they are ready to do anything.”

The politicization of the aid, which the opposition used as a wedge between the armed forces and Maduro, hoping for a split, had caused several international aid organizations such as Caritas and the ICRC to publicly distance themselves from the initiative.

But the crisis is real: almost 90 percent live in poverty and widespread food and medicine shortages have forced 3 million Venezuelans to flee since 2015.

Images of trucks full of food and medicine aflame were shown on TV screens around the world, supporting the opposition's claims that Maduro does not care for his people, but the aid did not enter Venezuela, and the regime did not topple. It was not clear who it would benefit.

“The general consensus was that the opposition lost because it didn’t achieve what it set out to,” said the International Crisis Group’s Phil Gunson. “On the other hand, Maduro lost because he became more isolated and clearly doesn’t trust the military to secure the border, having to use irregular armed groups.” 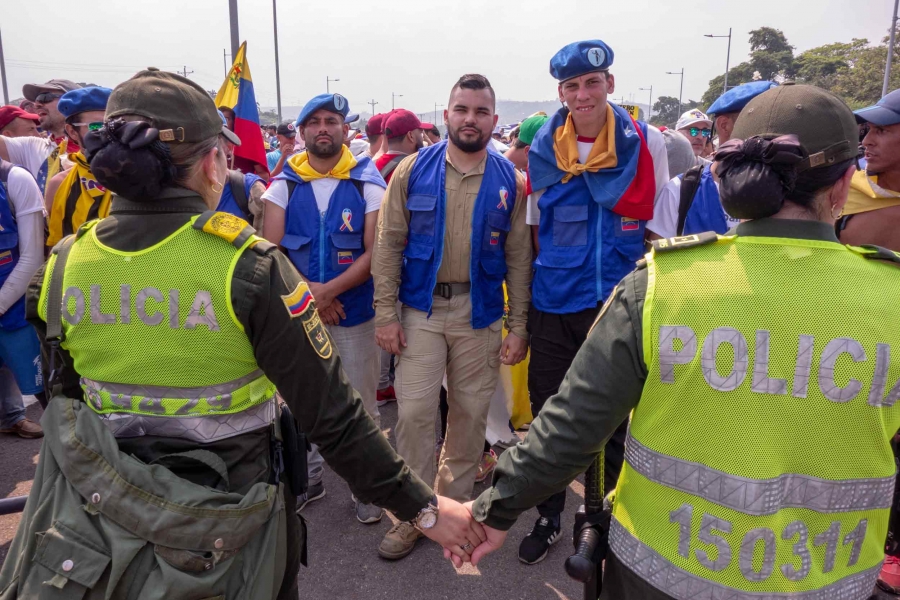 Determined protesters led the line in blue berets and vests, attempting to bring aid to Venezuela across the border — but they eventually retreated. Feb. 23, 2019, Cúcuta, Colombia.

On Saturday evening, the Venezuelan opposition and outspoken US politicians who have taken a hard stance against Maduro and socialism in Venezuela seemed to tweet almost in synchronization.

“Today's events force me to make a decision: to formally raise to the international community that we must have all options open to achieve the liberation of this country that struggles and will continue to fight,” tweeted Guaidó.

Ten minutes later, Florida Sen. Marco Rubio, an ardent Maduro critic, replied that he had discussed the day’s events with regional leaders and said that “the grave crimes committed today by the Maduro regime have opened the door to various potential multilateral actions not on the table just 24 hours ago.”

US Vice President Mike Pence will meet with regional leaders on Monday in Bogotá to discuss such actions.

Outside the Tienditas Bridge complex, the crowds acknowledged that they had failed to deliver the aid, but said the image of burning trucks could help their cause.

“When the world sees this, they will realize the true perverseness of a man who is burning food while his people starve. ... We know foreign intervention is coming.”

“When the world sees this, they will realize the true perverseness of a man who is burning food while his people starve,” said Mariana Yarin, sat with her two daughters on a patch of grass outside the heavily guarded bridge compound, now almost empty. “We know foreign intervention is coming.”