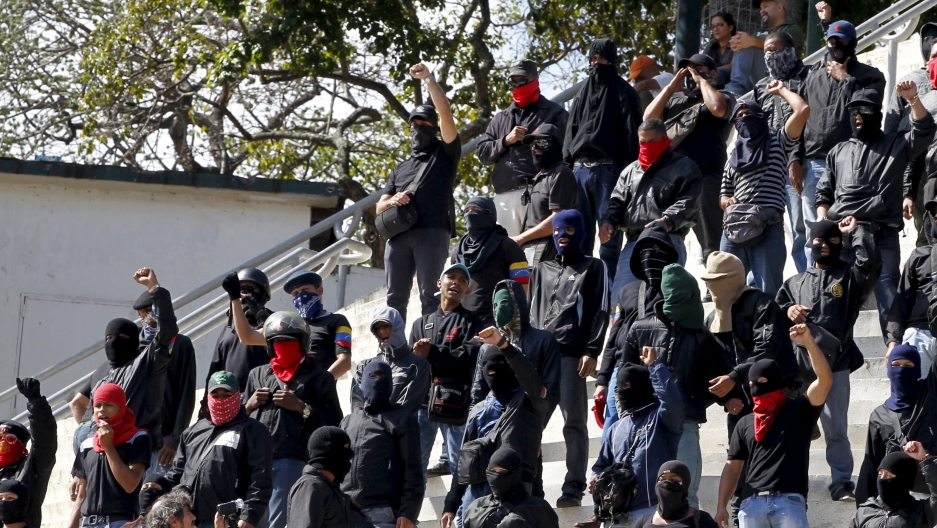 Members of a militant grassroots groups, called "colectivos," who view themselves as the defenders of revolutionary socialism but are denounced by opponents as thugs, are seen outside Miraflores Palace in Caracas, Venezuela, Jan. 5, 2016.

When rolling blackouts once again left millions without water and electricity earlier this month in Venezuela, President Nicolás Maduro called not on his military but loyal armed groups “to defend the peace of every neighborhood” and “every block.”

The groups — widely known as colectivos — took up the call with zeal.

As conditions in Venezuela have gone from dire to unliveable, Maduro has increasingly relied upon colectivos to quash discontent and maintain social order.

Since Jan. 23, when opposition leader Juan Guiadó invoked the constitution to declare himself interim president, embattled Maduro has faced regular large-scale protests over widespread shortages of food, medicine and water.

Anti-government protests are routinely broken up by masked motorcyclists who open fire onto crowds, sending protestors running for their lives, and journalists are persistently detained and threatened for covering the disturbances.

“They are vital as a defense mechanism in breaking up protests and generating fear in the civil population. ... They are the operating arm of the state.”

“They are vital as a defense mechanism in breaking up protests and generating fear in the civil population,” says defense analyst Rocío San Miguel, who points out that 2019 is notable for the growing public links between Maduro and the gangs.

“They are the operating arm of the state.”

But working-class communities in Caracas and across the country fear taking to the streets could cost them their food handouts or even their lives. That’s because colectivos run entire apartment blocks and neighborhoods as criminal empires.

In some areas, de facto authorities levy tolls for those entering or leaving neighborhoods and control the distribution of food and medicine, says the Latin American investigative unit Insight Crime.

The government increasingly relies on the unwavering loyalty of these irregular paramilitary groups to deal with the public heavy-handedly rather than the military, which could potentially disobey uncomfortable orders and cause a government-military rupture.

US Senator Marco Rubio wants them added alongside guerrillas and drug traffickers to the US list of Foreign Terror Organizations.

Yet, these groups often operate with impunity and are sometimes trained by the state in return for securing votes and oppressing political opposition. 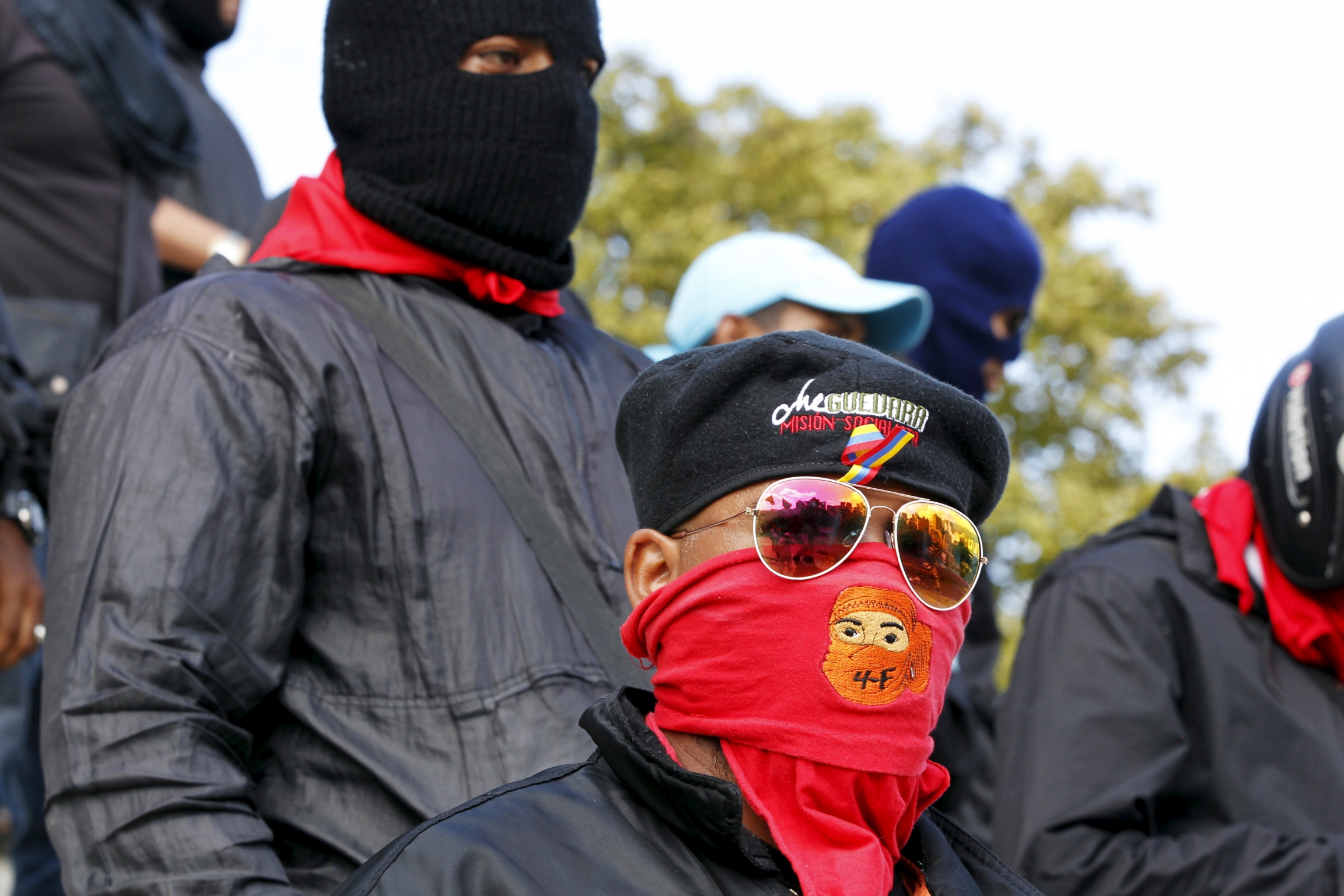 Members of a militant grassroots groups, called "colectivos," who view themselves as the defenders of revolutionary socialism but are denounced by opponents as thugs, are seen outside Miraflores Palace in Caracas, Venezuela, Jan. 5, 2016.

Who are the colectivos?

Colectivos were not always armed gangs defending the government through violence and fear — they evolved from groups established in 2001 by the revolution’s architect and Maduro’s predecessor — Hugo Chávez Frías.

“The colectivos first appeared in the early years of the Chávez administration to inform people of social policies. ... The idea was to organize people and inform them of what the government were doing.”

“The colectivos first appeared in the early years of the Chávez administration to inform people of social policies,” explains Margarita López Maya, a Venezuelan historian and political analyst at El Rosario University in Bogotá. “The idea was to organize people and inform them of what the government was doing.”

Then known as círculos Bolivarianos, or Bolivarian circles, they carried out activities ranging from workshops explaining the new constitution drawn up by Chávez to literacy support for the illiterate and social gatherings for women and youth.

Like the Committees in Defense of the Revolution, or CDRs, founded in 1960s Cuba by Fidel Castro, Chávez’s close ally and friend, these groups operated as a neighborhood watch tasked with getting the urban poor on Chávez's side while keeping close tabs on them.

But as national oil strikes and protests rocked Venezuela and confrontation heated up, Chávez, increasingly threatened by the opposition, looked to the groups’ other potential capacities to save the revolution.

Related: Chávez’s revolutionaries caught between legacy and change in Venezuela

Maya traces the origin of the colectivos we know today to a private meeting held weeks ahead of the April 2002 failed coup in which the military overthrew the ex-president only for him to be reinstated, fuelled by public support, 48 hours later.

High-ranking military figures were reportedly shocked and confused to see civilians present in the meeting room for the first time alongside Chávez — and even more so by his unprecedented request that they be armed, according to Maya.

“This may be the beginning of the colectivos ... when a threatened Chávez started to use civilian groups as armed tools to defend his government.”

“This may be the beginning of the colectivos,” Maya says, “when a threatened Chávez started to use civilian groups as armed tools to defend his government.”

Chávez successfully rode out the failed coup attempt — which he perceived as a US-backed capitalist siege — and armed civilians of the Bolivarian circles were identified as being among those who shot at anti-government demonstrators on the day of the coup. At least eighteen were killed in the bloodshed as government-loyal groups fired upon protesters.

In Caracas, Chávez permitted mayors to begin arming groups with local funds, not only to defend the government but to send a message to the military that he did not trust them and would survive — with or without them. 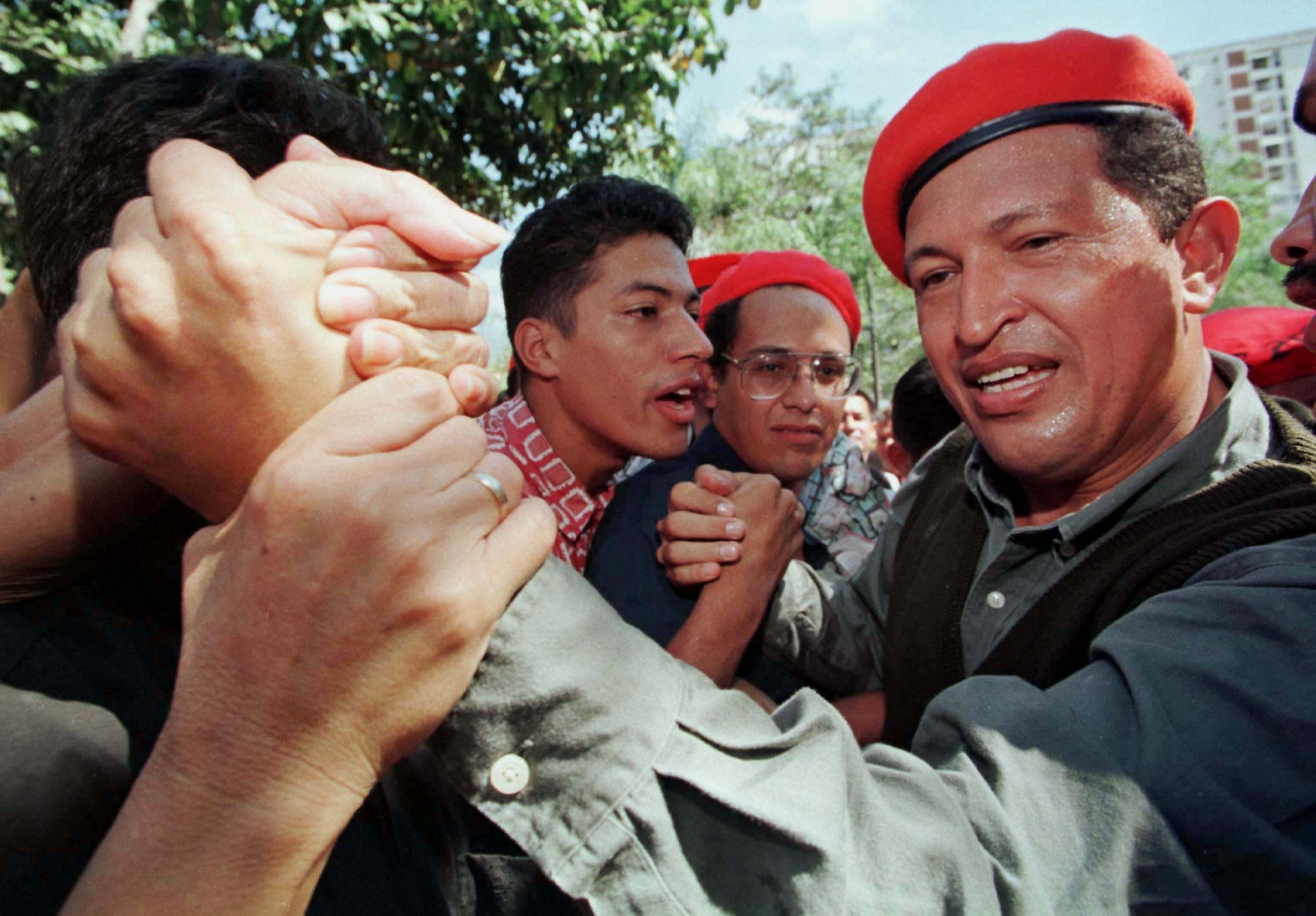 Former Venezuelan coup leader Hugo Chávez shakes hands with a supporter during a political rally in a poor residential area of Caracas Jan. 31, 1998. Chávez, whose Feb. 4, 1992 military coup failed and landed him in jail, ran for president on a ticket of radical change and won. A former member of the Venezuelan military's special forces unit, Chávez said his military training was excellent preparation for politics.

By 2005, Chávez consolidated the role of the colectivos as the country transitioned from a participatory democracy toward a socialist dictatorship.

Fearing not just internal aggression, but a US-led invasion to eradicate socialism from Latin America, defense forces were no longer just professional troops but also bands of armed civilians.

“They were preparing for ‘a prolonged, asymmetrical war like Vietnam,' and like Vietnam, they thought an army that is the people could fight and defeat the United States,” Maya says.

That war never came. But in 2013, Chávez died from cancer, leaving the future of the revolution uncertain.

His appointee, Maduro, inherited control of the country and its mass oil revenues which financed the revolution. But with none of Chávez’ military connections, nor his charisma and popularity as president-cum-TV celebrity, what remained was money.

Maduro set out to buy loyalties, say historians and analysts, by granting both the army and the colectivos unprecedented powers and business opportunities while siphoning off funds for their operations through corruption.

When oil revenues plummeted in 2016 and the country saw the worst economic crisis in its history, that money was lost too, and the colectivos’ pots began to dry up.

“Today’s colectivos are unrecognizable from those originally founded by Chávez. ...They may say they have an ideology but we know they do not, they are just mercenaries.”

“Today’s colectivos are unrecognizable from those originally founded by Chávez,” says Venezuelan political scientist, María Puerta-Riera, who has studied the groups extensively. “They may say they have an ideology but we know they do not; they are just mercenaries.”

The true identity of colectivo members are murky: Their covered faces and unlicensed plates help obscure them.

Their links with the police and the military further complicate matters. In some cases, colectivos are alleged to be trained by the military or the police, and a recruitment merry-go-round between the colectivos, police, the military and security forces keep them rotating uniforms, depending on what is needed of them.

“Some receive military training and are then sent to do the dirty work the military cannot afford to,” says Puerta-Riera, who believes their control over the country will likely grow as essential resources like water become more scarce.

But should state resources continue to dwindle for the colectivos, their loyalties may wane, says Maya, who believes some are already beginning to turn on Maduro.

“They’re there for the money and the weapons, once that’s gone, what’s left? Maduro has already abandoned all socialist principles to cling to power — what remains ‘is how much are you going to pay me?’”

Collectivos today remain the most ardent defenders of the revolution and are the most-feared groups in the country.

In late February, when opposition activists attempted — and failed — to push aid into Venezuela through the Colombian border, their presence and power was front and center.

“It’s not the National Guard I’m scared of, it’s the colectivos. ... They’re the ones who will shoot you.”

“It’s not the National Guard I’m scared of, it’s the colectivos,” said Luis, a young Venezuelan who had tried to push the aid across the border. “They’re the ones who will shoot you.” Luis declined to share his last name out of fear of retribution.

At the Colombian side of the border, masked gangs threw rocks and occasionally opened fire during clashes that left around 300 injured. The result was bloody melees, burning trucks and chaos. Tons of food and medical supplies were lost.

Opposition leader Guaidó had hoped Maduro’s orders to block much-needed aid would be a test for national security forces that would lead to mass defections and government collapse.

Venezuelan state security forces stood resolutely behind their riot shields, repelling crowds of volunteers with persistent volleys of tear gas, but colectivos proved essential in fighting off what Maduro deemed a pretext for foreign invasion. 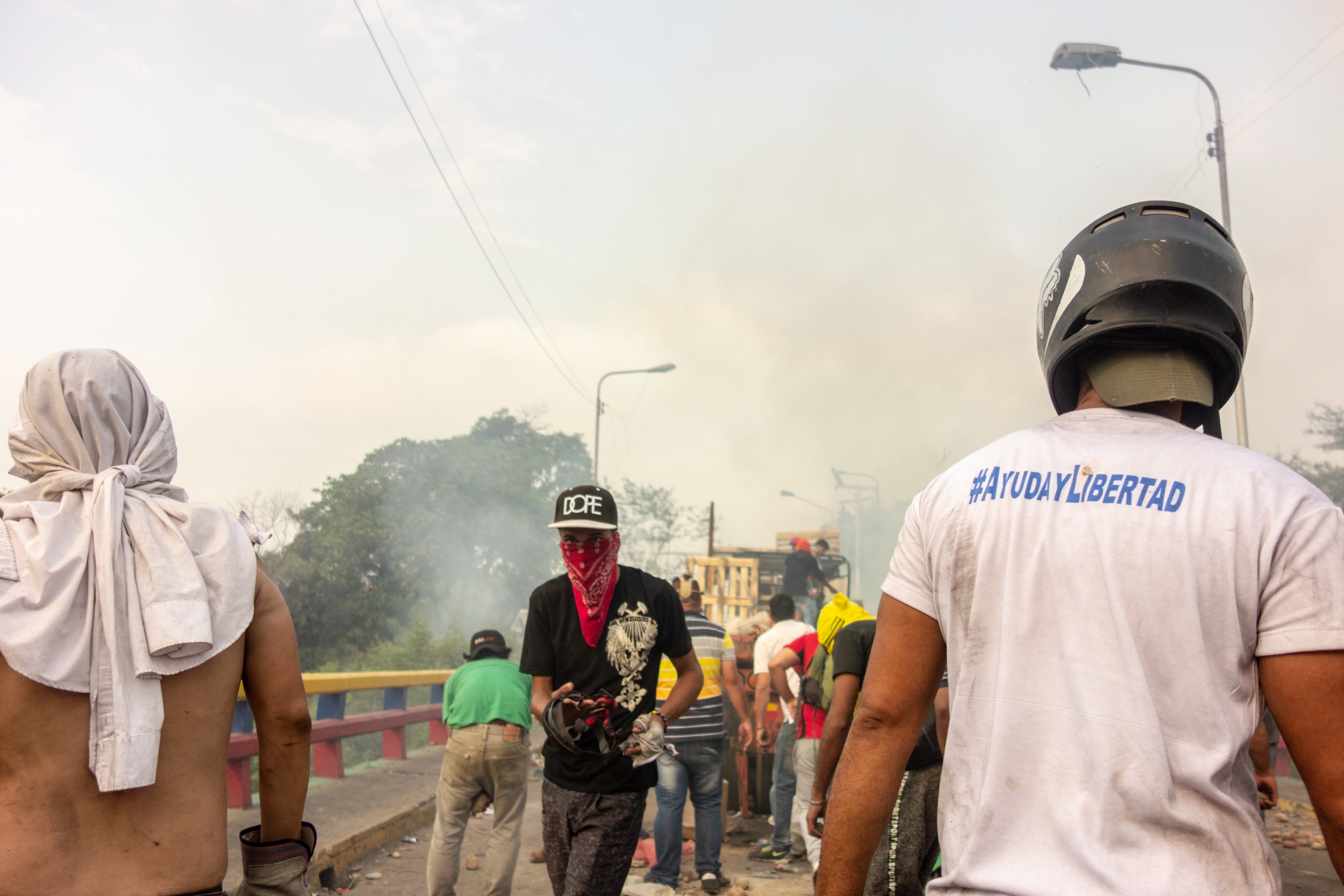 Protesters throw rocks behind trucks full of aid that were set on fire during clashes between civilians and Venezuelan security forces in Cúcuta, Colombia, Feb. 23, 2019.

During the aid standoff, colectivos in Venezuelan border towns roved the streets on motorcycles dressed in balaclavas, forcing people to take shelter in their homes for fear of being labeled as protesters.

Those who were spotted taking part in demonstrations against the regime had their houses spray-painted in an ominous marker of potential repercussions.

“It was like watching a film of my life and knowing it has a terrible ending. When a colectivo catches you one of two things happen: Either you die from a bullet or you go to prison where you suffer every form of torture that exists."

Wendy Ortiz, 27, says the colectivos identified her at the border as an opposition activist and passed the information on to Maduro’s right-hand man, Diosdado Cabello, vice president of the United Socialist Party of Venezuela. Ortiz says Cabello singled her out on television as a “terrorist” and banned her from entering the country.

On another occasion, they physically detained her while she was filming demonstrations. Before protesters were able to force her free she feared they would sexually assault and then imprison her.

“It was like watching a film of my life and knowing it has a terrible ending. When a colectivo catches you one of two things happen: Either you die from a bullet or you go to prison where you suffer every form of torture that exists,” Ortiz says.