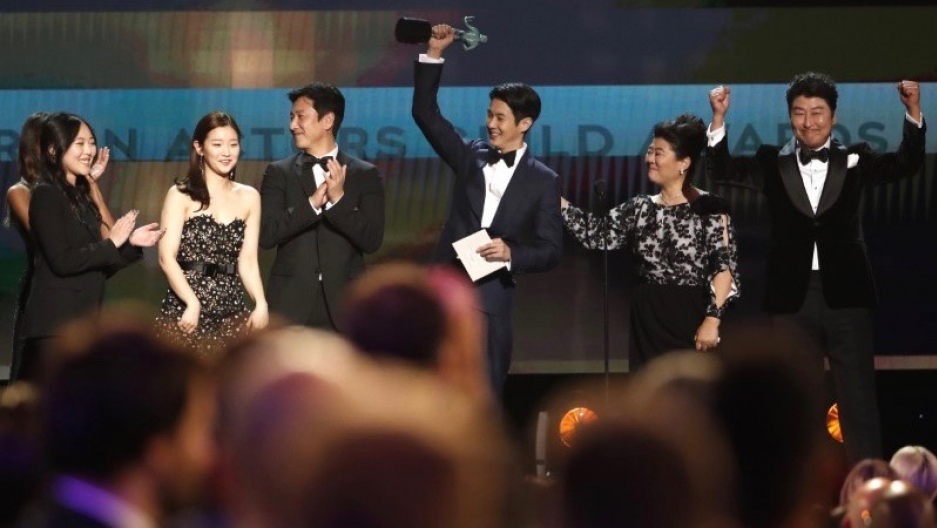 The cast of "Parasite" accepts the award for Outstanding Performance by a Cast in a Motion Picture during the 26th Screen Actors Guild Awards in Los Angeles,  Jan. 19, 2020.

At first glance, the recipe for the success of “Parasite” seems simple. Combine a quirky, dark comedy plot about a poor family conning a rich one, then add one of South Korea’s most prolific film directors, Bong Joon-ho, and an award-winning cast.

On the verge of making history as the first-ever foreign language film to win an Academy Award for best picture, the film has already won a long list of accolades — including the Cannes Film Festival’s highest prize — and grossed more than $163 million in box office revenue worldwide.

But experts say that there’s something special about "Parasite." The film forces us to confront the painfully relatable, highly contemporary theme of economic inequality around the world. And in South Korea, that theme hits especially hard as people struggle against a slacking economy, unstable geopolitics and ever-surging living costs.

“Hollywood has always tended to depict [inequality] as a dystopia or an apocalypse … We never comment on the present-day phenomenon. We only point to the future,” said Kyung Hyun Kim, a professor of East Asian studies and visual studies at the University of California, Irvine. "'Parasite' is addressing social problems that Hollywood refuses to look at.”

The setting of “Parasite” essentially goes back and forth between two houses — the Park family’s immaculate, wide-windowed modern mansion built by a famous architect and the Kim family’s crowded, half-basement apartment in what is essentially a concrete slum. The symbolism is obvious.

“For somebody who is living in Korea, space is very important. You don’t have much for open spaces — things are very confining and claustrophobic. ... Even if you live in an average apartment, you basically spend your entire life in the elevator because everything is just congested, overpopulated high rises."

“For somebody who is living in Korea, space is very important. You don’t have much for open spaces — things are very confining and claustrophobic,” Kyung Hyun Kim said. “Even if you live in an average apartment, you basically spend your entire life in the elevator because everything is just congested, overpopulated high-rises. So, space is a luxury. This is where Bong’s directing genius comes out — his ability to tell a story about spaces.”

Half-basement apartments like the one shown in "Parasite" are notorious for flooding in Seoul during the annual monsoon season along with consequential mold, cockroaches and — above all — far cheaper rent.

“When Korea was urbanizing back in the 1960s, there were shanty towns and all sorts of illegal housing up on top of hills. Now, they are all cleared out and replaced with really expensive homes.”

“It’s true in Korea that all the cheap housing is sort of located down below — the bottom, so to speak,” said Andrew Eungi Kim, a professor at Korea University who studies Korean social issues and quality of life. “When Korea was urbanizing back in the 1960s, there were shantytowns and all sorts of illegal housing up on top of hills. Now, they are all cleared out and replaced with really expensive homes.”

These days, however, the extra savings made from living in a half-basement apartment means a lot more to the average South Korean living in a Seoul-centric society. Nationwide, overall rent prices have gone up by nearly 46% between 2001 and 2019, according to the Organisation for Economic Co-operation and Development (OECD) data, while nominal housing prices have gone up by more than 91%.

Meanwhile, the average price of a home in redeveloped apartment buildings around Seoul has gone up more than 50% in just four years.

“To put this into perspective, all you have to do is look at how long it takes a person making an average income on an annual basis to buy a house. In Korea, it takes like 12 years of saving every cent to buy an average apartment in Seoul,” Andrew Eungi Kim said. “But in places like New York, it’s only around six or seven years … Buying a house is a distant dream here.”

"Parasite" is part of a growing trend toward hard-hitting commentary on social inequality in the film industry. "[There are] films coming out of ... countries like South Korea that comment directly on the biggest problem emerging today: neoliberal capitalism," professor Kyung Hyun Kim said. “Neoliberalism” is an ideology that highly values free-market capitalism, and with little state intervention on social and economic affairs.

South Korea bought into neoliberalism starting in the 1980s, and director Bong's film career has made it clear where he stands. Most of his work depicts the burdens low-income people bear in times of class warfare — in the case of “Parasite,” it’s the wealthy Park family’s subtle, but spiraling condescension of the Kims, who all pretend to be unrelated as they take on gigs as the Park family’s tutors, drivers and housemaids.

And just as Bong said, it’s hardly an abstract matter for most South Koreans who have fallen into what some call an “inequality paradox.” Nearly 46% of South Koreans over the age of 65 lived in poverty in 2015, for example, while youth unemployment rates continue to rise. Seoul tied with New York as the seventh most expensive city in the world last year in the World Cost of Living survey, and more than half of the entire country lives in provinces that count as Greater Seoul.

Put simply, this one stat says it all: Seoul’s middle class shrunk by roughly 8% between 1990 and 2013, and its proportion of low-income households nearly doubled.

“I mean, we have basically reached a point where there’s no stopping the growing gap between economic classes — the rich and the poor, the haves and the have-nots,” Kyung Hyun Kim said.

“I think that this film is really in touch with the real-life anxieties and discontent around capitalism. ... 'Parasite' is about the basic indignities and mundane violence that class warfare enacts.”

“I think that this film is really in touch with the real-life anxieties and discontent around capitalism,” said Anthony Yooshin Kim, a visiting assistant professor of American studies at Williams College. “'Parasite' is about the basic indignities and mundane violence that class warfare enacts.”

The film’s haunting audit on capitalism confronts another problem with modern South Korean society — the wealthy’s ability to get ahead by pulling strings and buying opportunities. In the film, the affluent Park family employs the Kim family’s two adult children, Ki-jung and Kevin, to tutor their daughter and son after the Kims forge records suggesting that they attended elite schools.

That plotline conveniently debuted in South Korea not too long before the massive Cho Kuk scandal overtook national headlines. Similar to the college admissions scandal in the United States, South Koreans became outraged when they found out that the wife of the country’s then-minister of justice, Cho Kuk, was accused of forging credentials to help their daughter get into medical school. Cho Kuk ultimately resigned after weeks of protest, but the scandal sparked a national conversation about fairness and the wealthy’s systematic advantages.

“That was a really fascinating thing to see,” Andrew Eungi Kim said. “Here’s a movie about overeducation and how you compete in this unfair system to get into good schools and get employed, and the Cho Kuk scandal was about the exact same thing in real life.”

“If the Parks could, they would have teacher Kevin go over and take the SATs for their daughter,” Kyung Hyun Kim said with a laugh.

Without spoiling the ending, the film concludes just as it started. The Parks are still rich and the Kims are still poor. Ultimately, "Parasite" speaks to a troubling time when South Koreans are still calling their country “Hell Joseon” — a moniker that plays on Korea’s historical Joseon dynasty, where social classes were fairly fixed and upward mobility was nearly impossible.

“This film is about the squeezing of the middle class and the transformation of the world economy to something less and less reliable,” Kyung Hyun Kim said. “Parasite really comments on this in a cheeky way. It’s trying to tell us, ‘Listen, if we don’t do something, we are just going to live in a world of parasites mooching off the rich.’”