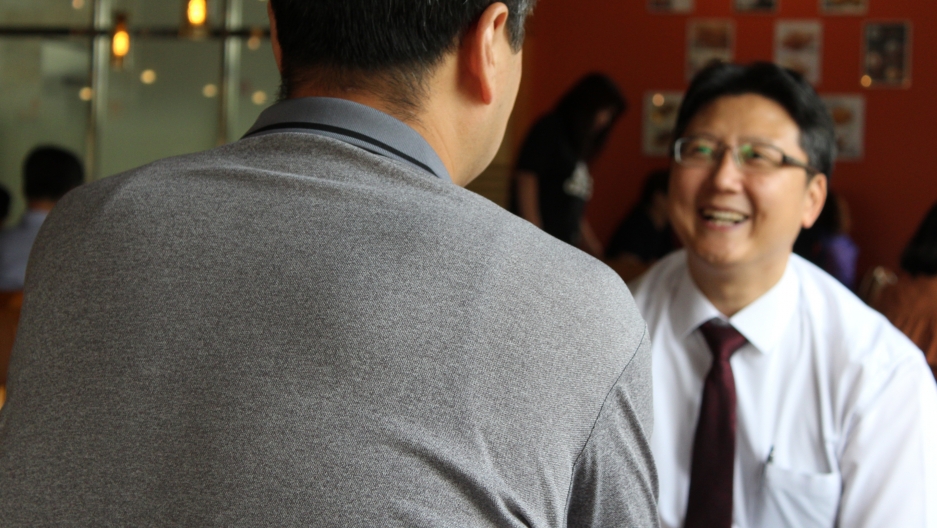 Taylor Tak still remembers her interview at a South Korean government office two years ago. After submitting a headshot, resume and cover letter, she spoke with a recruiter in person for what would soon become her first full-time job.

“The recruiter asked me, 'Are both of your parents alive? What town are you from? Where’s your mom and dad from in Korea? What high school did they go to?’” says Tak, now a plus-size model and body activist. “I was thinking to myself, ‘This is an interview about me — not my parents.’”

Tak’s interview is an everyday reality for millions of young people in South Korea, who are often asked trivial questions about their height and weight, where their siblings went to college and what their parents do for work.

This reality has fueled plastic surgery clinics peddling makeovers to increase one’s chances of employment, as well as photo studios promising a “natural look” for doctored headshots. It’s also led to a rise in intensive job interview academies, all during the country’s worst youth unemployment rates on record.

South Korean President Moon Jae-in called out these invasive job interview questions during the first month of his term in 2017, promising to write “blind hiring” practices into law by the end of the year. But much of the first half of his presidency was instead spent on building diplomacy with North Korea and addressing the nation’s air quality issues. Only now is his administration catching up. 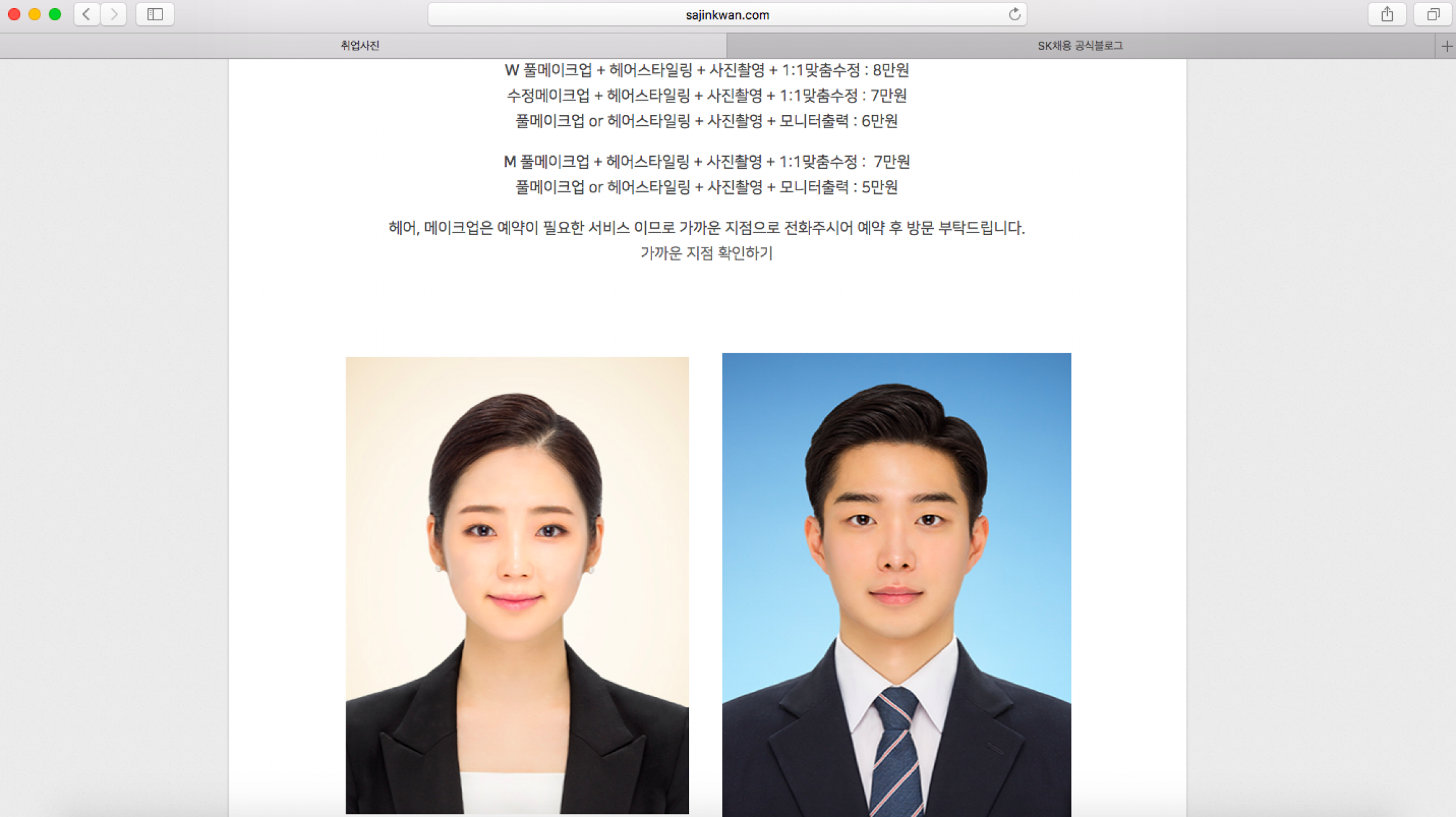 A screenshot from a photo studio in South Korea advertises headshots for job seekers. According to the price listing, female job seekers can get full face makeup, hair styling, a photoshoot and custom photo editing for about $68. For men, the same service is about $59.

Screenshot via Our Neighborhood Photo Studio

Starting July 17, South Korean companies with more than 30 workers will no longer be allowed to ask job applicants about their family members, place of origin, marital status or property ownership situation. The new legislation also bars companies from asking appearance-related questions like height and weight as long as it is not relevant to the work.

"In Korean society, it’s all about the way we look and who we know — our connections.”

“I think this is a good change. Finally, we are going in the right direction,” said Tak, 27. “I got many of these questions when I applied for jobs. In Korean society, it’s all about the way we look and who we know — our connections.”

All paper, no practice?

South Koreans are used to answering questions about their family background in job interviews, whether they like it or not. Thousands of young job applicants compete for coveted office jobs by taking company-specific exams every year, but nepotism is still common in the workforce along with corrupt hiring practices. Job candidates who come from wealthy, well-connected, metropolitan families or a lineage of elite university attendees have an advantage.

“When I was looking for my first job, I was asked very irrelevant, uncomfortable personal questions. ... I was asked if I go to clubs or if I drink, and I think the questions about my family are completely irrelevant and unnecessary.”

“When I was looking for my first job, I was asked very irrelevant, uncomfortable personal questions,” said Jeong Jin-yoon, who works in the movie industry. “I was asked if I go to clubs or if I drink, and I think the questions about my family are completely irrelevant and unnecessary.”

“I was once asked for my detailed addressed in an interview, and asked about how my place looks inside,” added Kim Ryeong-eun, a graduate student in Seoul.

Under the new amendment, companies will face fines up to $4,245 for asking inappropriate questions about a job seeker’s appearance or family background. To experts and everyday citizens, it’s welcome progress — but it’s still far from perfect.

“... labor laws in South Korea really need to address deeper issues. This so-called blind application law is a step in the right direction, but it’s also cosmetic on so many levels.”

“I do see this as a positive and real effort to help alleviate the generational issue of underemployment. For the segment of the public looking for [white-collar] jobs, the issue of transparency in applications has been raised for generations,” said C. Harrison Kim, a professor at the University of Hawaii at Manoa and author of a book about work in postwar North Korea. “But, of course, labor laws in South Korea really need to address deeper issues. This so-called blind application law is a step in the right direction, but it’s also cosmetic on so many levels.” 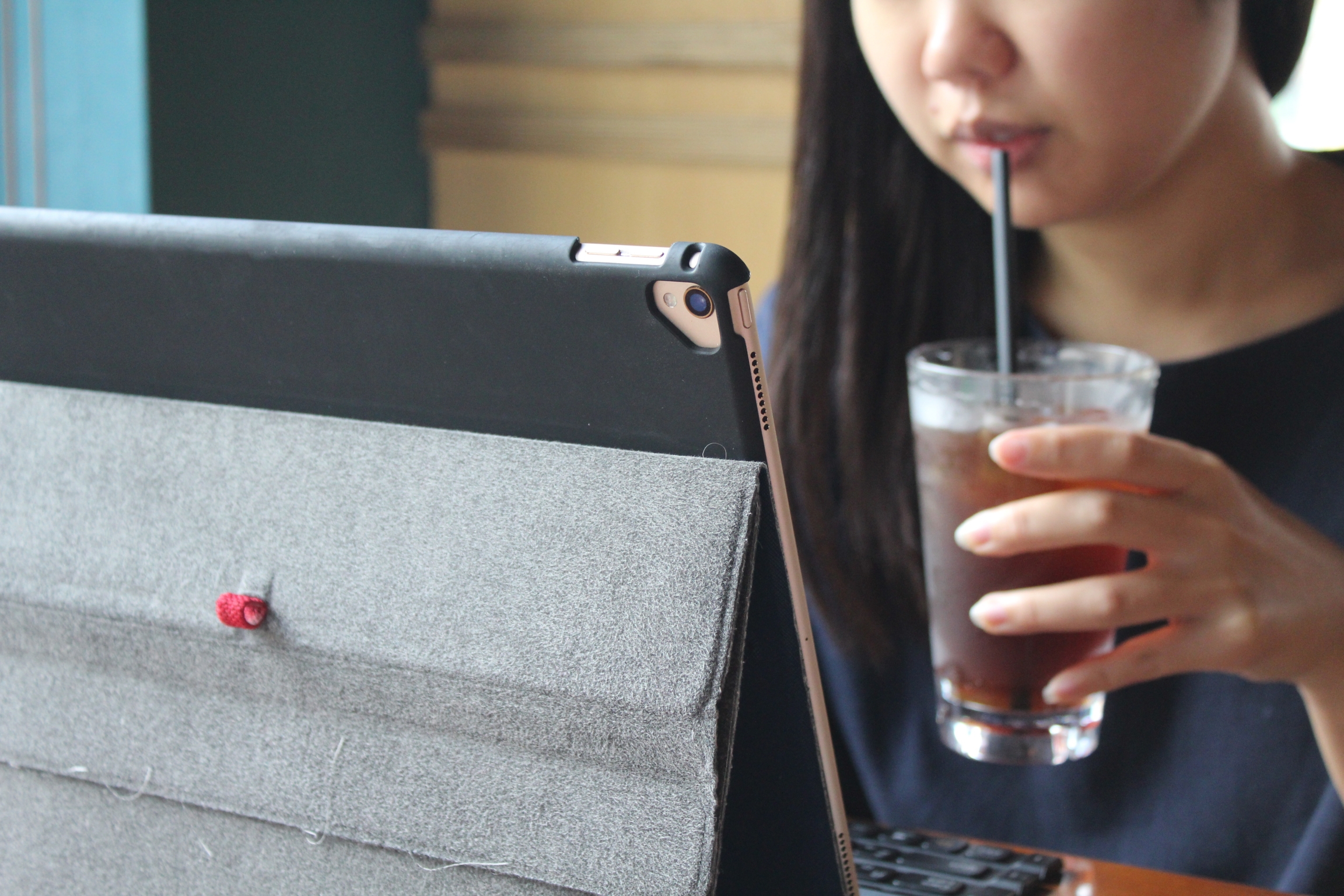 Despite past promises, the Moon administration has yet to improve bigger issues facing blue-collar workers, such as pension issuance, workplace safety and corporate liability for worksite injuries. Roughly 971 workers died on the job in 2018 alone, and the most common accident type was fatal falls in the construction industry.

Meanwhile, women and minority workers still face rampant discrimination in the workforce, and major workers' strikes continue to make headlines every week. Just in the last two months, thousands of bus drivers, public school workers and car factory workers walked out of work because of low pay and other grievances.

Even among the white-collar class, some South Koreans worry that the new amendment is all paper and no practice.

Even among the white-collar class, some South Koreans worry that the new amendment is all paper and no practice. The new penalties are arguably chump change for multi-billion dollar companies like Samsung, which raked in $225 billion in sales and stood as the 14th-largest company in the world last year. Others are skeptical that the law will be enforced at all since the onus of reporting inappropriate recruiting questions falls on the applicant.

“... if I were the interviewee who is being asked irrelevant questions, I think I’d be too scared to report it. I’d be worried that the company might find out and not hire me. ... So, even with the fines, I don’t think people will report discrepancies a lot.”

“I think [the amendment] is a good thing, but if I were the interviewee who is being asked irrelevant questions, I think I’d be too scared to report it. I’d be worried that the company might find out and not hire me,” said Kim Reyong-eun, a graduate student. “So, even with the fines, I don’t think people will report discrepancies a lot.”

An old adage says that a picture is worth a thousand words, but in South Korea, it’s arguably worth a lot more. About 93% of 760 companies surveyed ask for a photo in their job applications, according to a 2016 survey, and 45.2% of recruiters said they can “judge an applicant’s personality” by these photos. 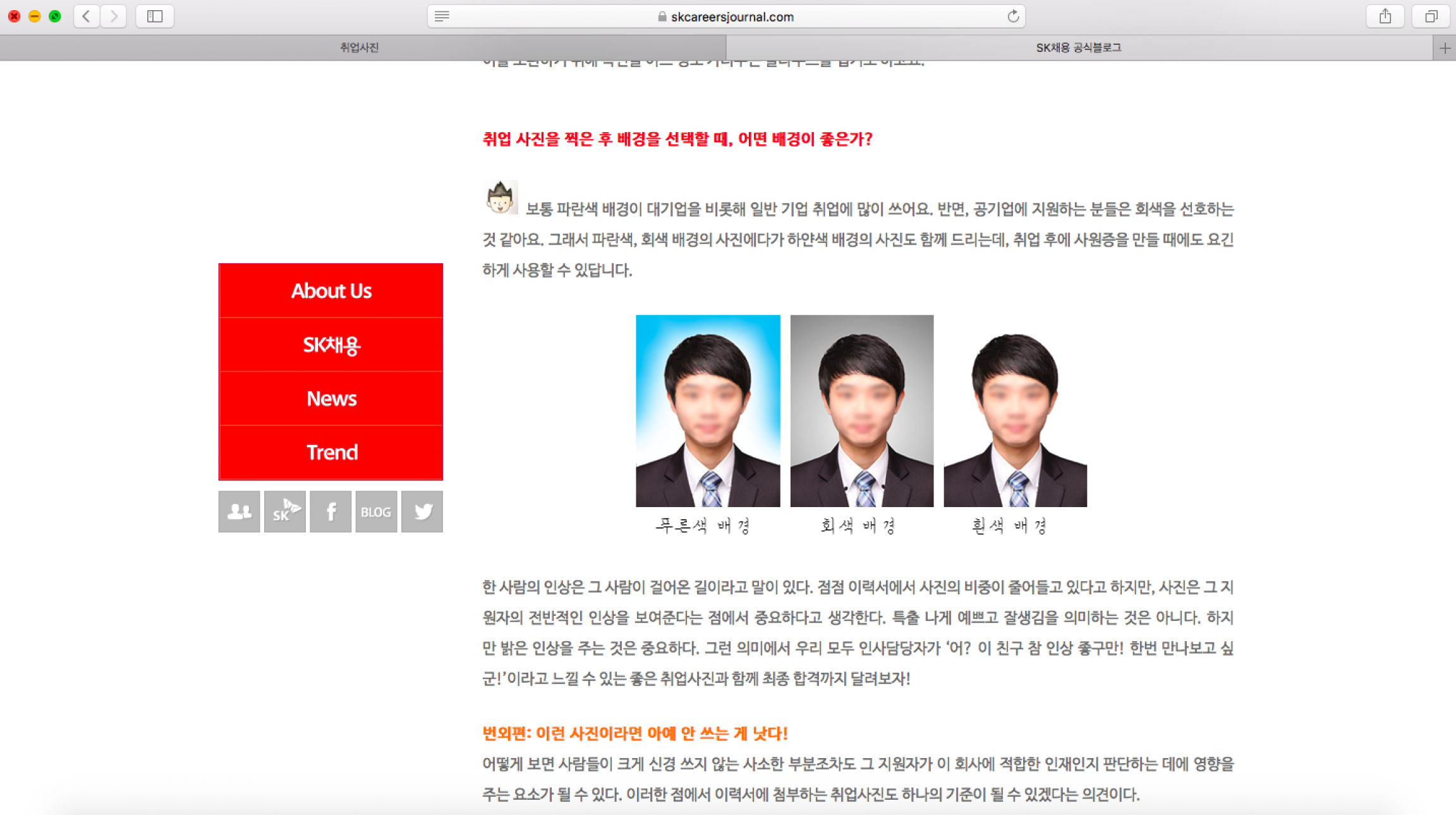 A South Korean website advises male applicants on what color background to use in their headshots, depending on the company and the impression they want to leave to job recruiters.

“The crazy thing is that each company wants you to look a different way. So, one person applying for a company like CJ might take a different style of professional photos than what they took for applying to Samsung or LG,” Tak said. “There are online blogs with advice: ‘You should groom yourself this way, have your hair like this, makeup like this.’ Some photo studios even will provide makeovers for specific companies.”

The emphasis on headshots speaks to the nation’s hiring process, where the wealthy and the attractive seem to fare better than others. Yet South Korea’s new “blind hiring” amendment still allows headshots on applications, which means that the hiring process isn’t even technically blind.

"...of course my appearance matters. I once interviewed for [a part-time job] at Subway and, because I’m plus-sized, they asked me humiliating questions like, ‘Can you even move quickly?’”

“I usually have to submit photos when I apply for jobs. That is a constant among Korean young people,” Tak said. “And of course my appearance matters. I once interviewed for [a part-time job] at Subway and, because I’m plus-sized, they asked me humiliating questions like, ‘Can you even move quickly?’” 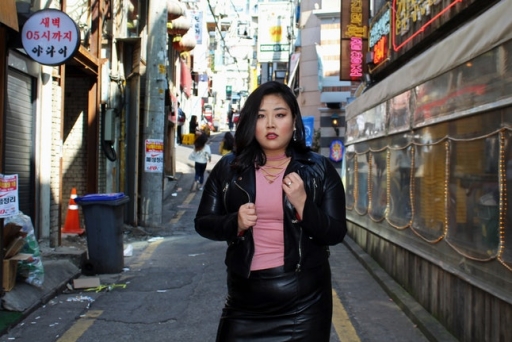 Kim Jin Woong, a government worker at the Ministry of Employment and Labor, told The World that lawmakers intended to ban asking for headshots in the original bill. However, the new amendment ultimately allowed companies to ask for them in job applications “for the purpose of identity verification.”

Yet even with its flaws, job-seeking South Koreans no doubt see the amendment as a positive change.

“I’ve even been asked about my alcohol tolerance at job interviews before … It’s much more important for companies to ask us other questions to get to know us,” he said. “Just having these regulations might decrease the number of companies asking these questions, so I’m positive about the future.”