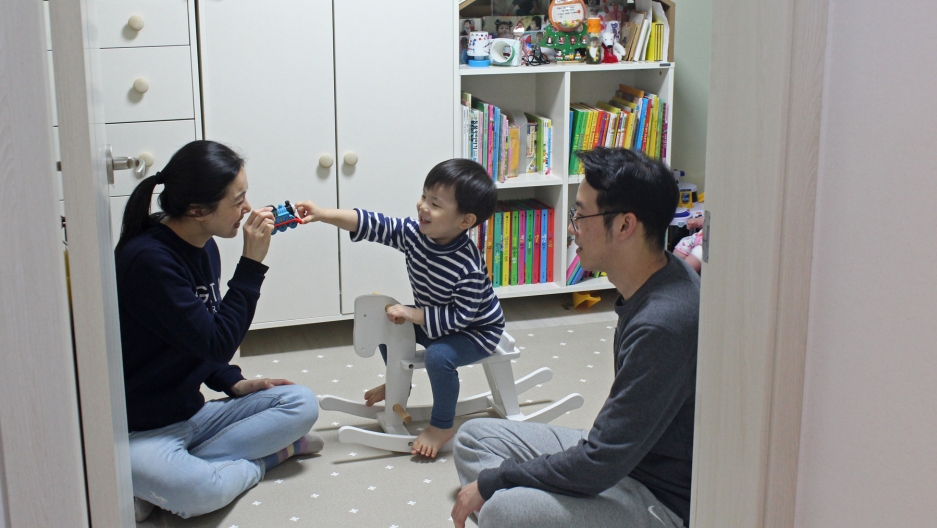 Seo Ji-hye and Cho Sung-won watch as their two-year-old son, Han-sol, plays with a toy train in his bedroom in Seoul, Korea.

Seo Ji-hye and Cho Sung-won live together in a tall building tucked behind a cafe-dotted street that serves artisan brews. Inside their apartment, 39-year-old Cho shows off the projector he installed onto his living room wall, while his wife Seo, 37, runs next door to her mother’s house to pick up their preschool-aged son.

“The light isn’t as bright as a TV, so it’s better for my son’s eyes,” Cho explains, grinning as he gives a tour of his home.

South Korea suffers from dwindling birth rates and high unemployment. In its capital, the Seoul Metropolitan Government is dishing out millions to help newlywed couples like Cho and Seo buy or rent homes in the city — all in hopes that they’ll have kids.

To Cho’s right, there’s the master bedroom fixed with a display case for his ties and his watches. To his left, there’s a gated-off kitchen, a colorful nursery filled with cases of books, a miniature piano and a rocking horse — and behind him, a wall of family photos featuring quotes expressing the importance of family and child-rearing.

Cho is an office worker, and his wife, Seo, is a stay-at-home mom. Years ago, they would have never imagined raising their son in a house like this one.

South Korea’s birth rate declined 8.6% between 2017 and 2018, making it one of the lowest in the world at 0.98. That's less than one baby born per every child-bearing-aged woman. The worldwide replacement fertility rate, or optimal rate at which women should give birth to sustain population levels and maintain stability, is about 2.1 children per women, according to the United Nations Population Division.

And real estate in this area — a well-groomed district in Seoul — doesn’t come cheap. Housing prices across the city are ever rising, while young, newlywed couples are forced to hustle in a dwindling economy with nearly record-high youth unemployment rates.

The government’s logic is simple: If newlywed couples have money to spare, they’ll be more likely to raise a family. 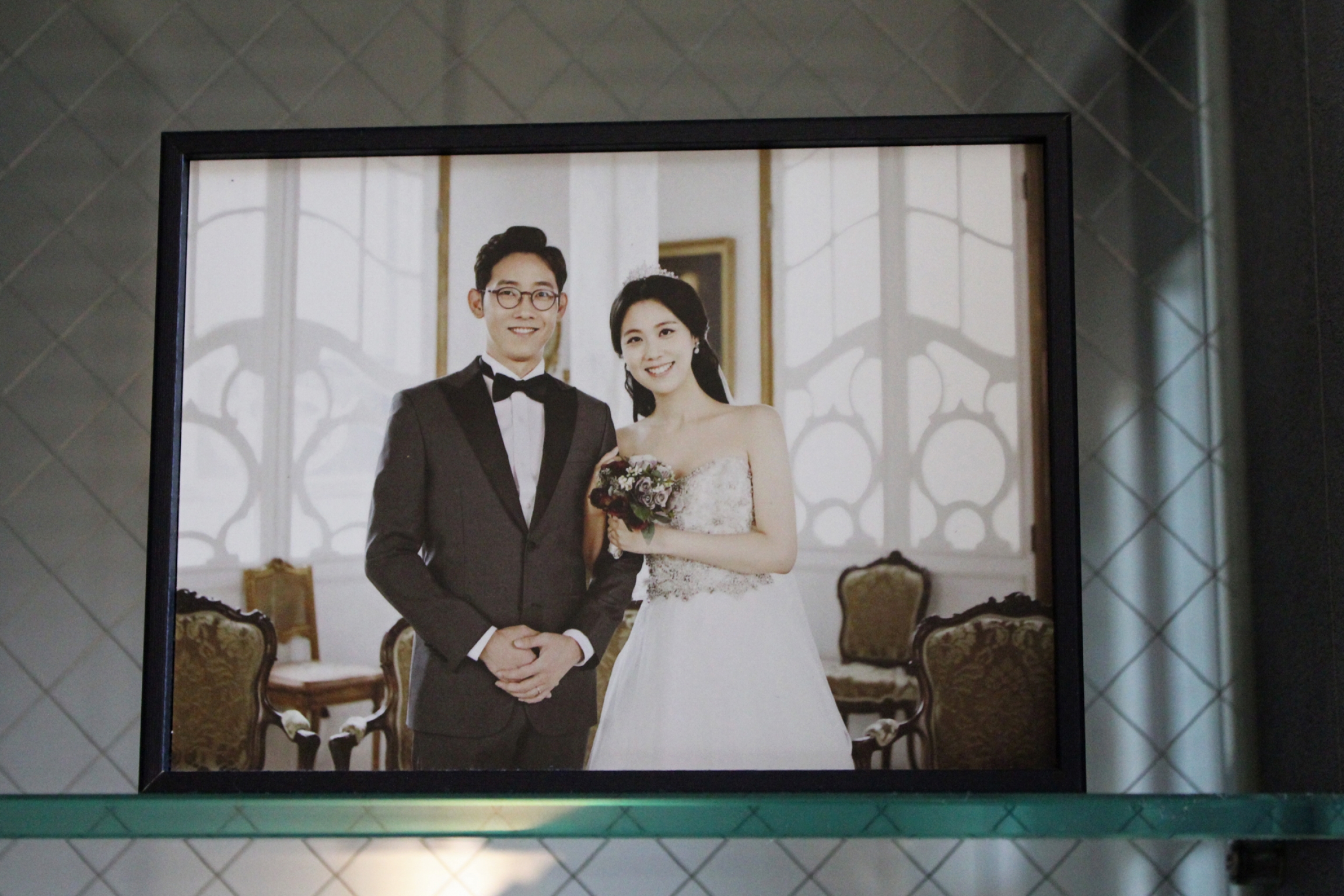 A wedding photo of Cho Sung-won and Seo Ji-hye rests on a shelf by their apartment entryway.

“Compared to ten years ago, men and women are getting married later and having fewer kids. ... The number one reason, surveys show, is that they are not financially stable enough — that they don’t have solid jobs. So, they are worried about not being able to take care of their family — if they do have one eventually.”

“Compared to ten years ago, men and women are getting married later and having fewer kids,” says Andrew Eungi Kim, a professor of sociology at Korea University. “The No. 1 reason, surveys show, is that they are not financially stable enough — that they don’t have solid jobs. So, they are worried about not being able to take care of their family — if they do have one eventually.”

For Seo and Cho, the Seoul Metropolitan Government’s new programs — which first started in 2018 — make perfect sense. In their case, they receive monthly financial help to pay off the interest on their bank-sponsored home loan. In total, they will receive around $76,000 over the next 30 years.

Similar programs pay a portion of the interest rates on jeonse, a loan system unique to South Korea that allows couples to lease a home rent-free so long as they put down a large deposit (anywhere from $50,000 to $300,000 or more). Under the jeonse system, families eventually get the deposit back when they move out — meaning they live essentially rent-free, aside from paying back their deposit loan every month.

Landlords make money by investing the deposit or collecting interest on it, and insurance protects the tenants from losing it.

“The subsidy had a huge impact on our ability to purchase a house for our kid. ... It definitely took a big economic burden off our shoulders.”

“The subsidy had a huge impact on our ability to purchase a house for our kid,” Cho said. “It definitely took a big economic burden off our shoulders.” 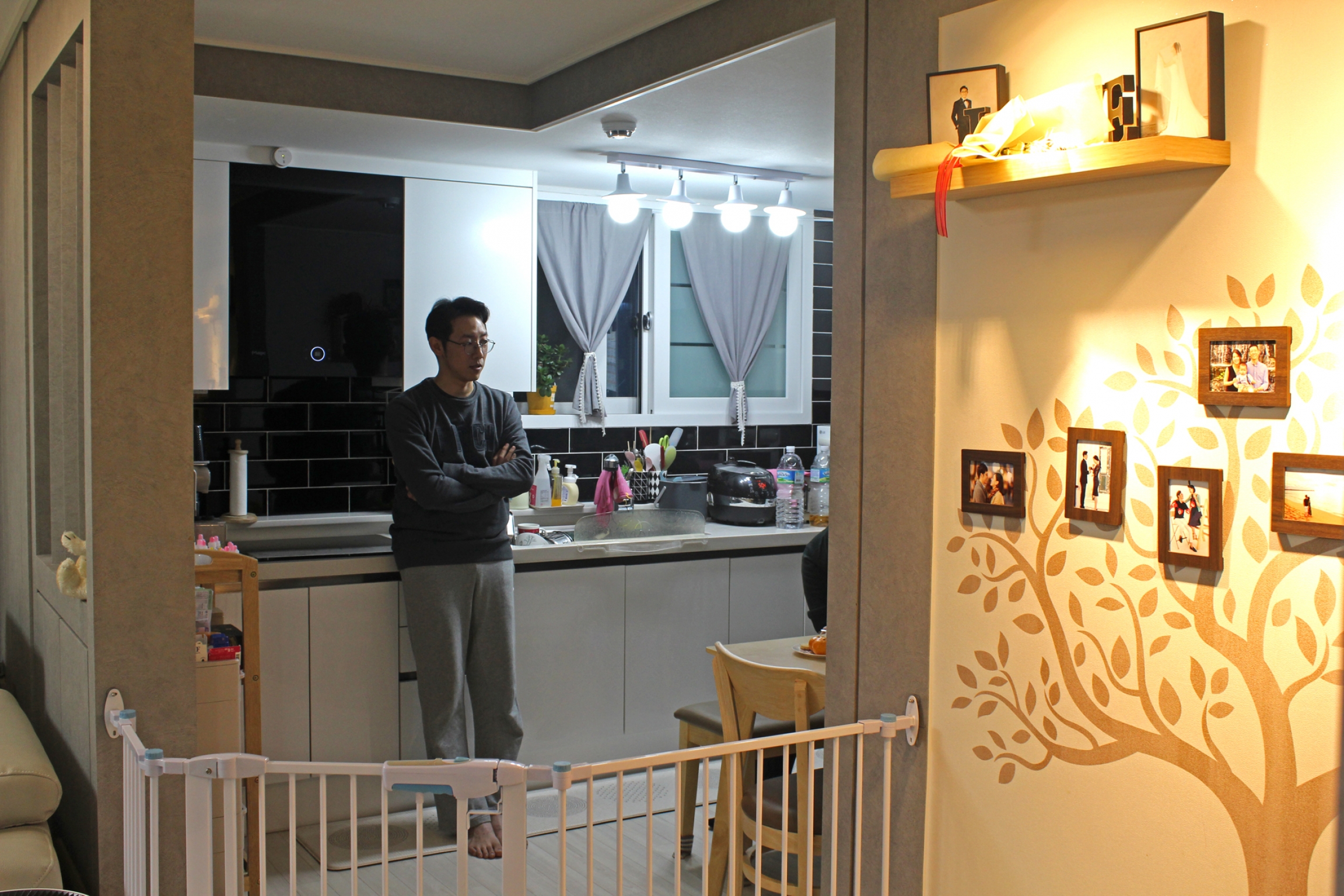 Cho Sung-won stands in his kitchen in his Seoul-area apartment, which he bought with help from the Seoul Metropolitan Government.

Around half of all newlyweds each year — roughly 25,000 couples — are receiving some form of government housing help, Kim Joong-hun, an official at the Seoul Metropolitan Government’s housing policy department, told The World. It’s too soon to know whether these programs really work from a research perspective, but they certainly can’t hurt, experts say.

“The reality of our country right now is that it’s impossible to buy a home without your parents’ help. That’s why policies like these are important — because it can be a step for helping the economy and birth rate in the future.”

“This kind of assistance isn’t a complete solution, but it definitely helps,” says Park Tae-won, a professor at the department of urban planning and real estate at Kwangwoon University. “The reality of our country right now is that it’s impossible to buy a home without your parents’ help. That’s why policies like these are important — because it can be a step for helping the economy and birth rate in the future.”

When Seo returns home with her son, two-year-old Han-sol, she smiles as he immediately tried to peel off his coat and run toward the plastic slide set up in the living room. Then she follows him into his bedroom and watches him bounce from rocking horse to piano keys, followed by a show-and-tell of all the stuffed animals on his shelf.

“He’s very active and he loves music, and he’s always moving. I’m always excited to see how he’s going to grow in the future,” she says. Later, she adds: “Ever since I gave birth to Han-sol, I’ve just prayed that he becomes a person who has a lot of love to share.”

Already, they’re imagining their futures as an expanding family. They frequently talk about the elementary schools and middle schools in the area, and how that’s a pathway to good high schools and even better colleges. They’re also planning with their checkbooks: Currently, the couple currently receives around $250 per month from the local government to cover the cost of raising Han-sol, but the payments will gradually decrease until he turns six. They also received around $420 for getting pregnant with their second child and will get another $420 when the baby is born. 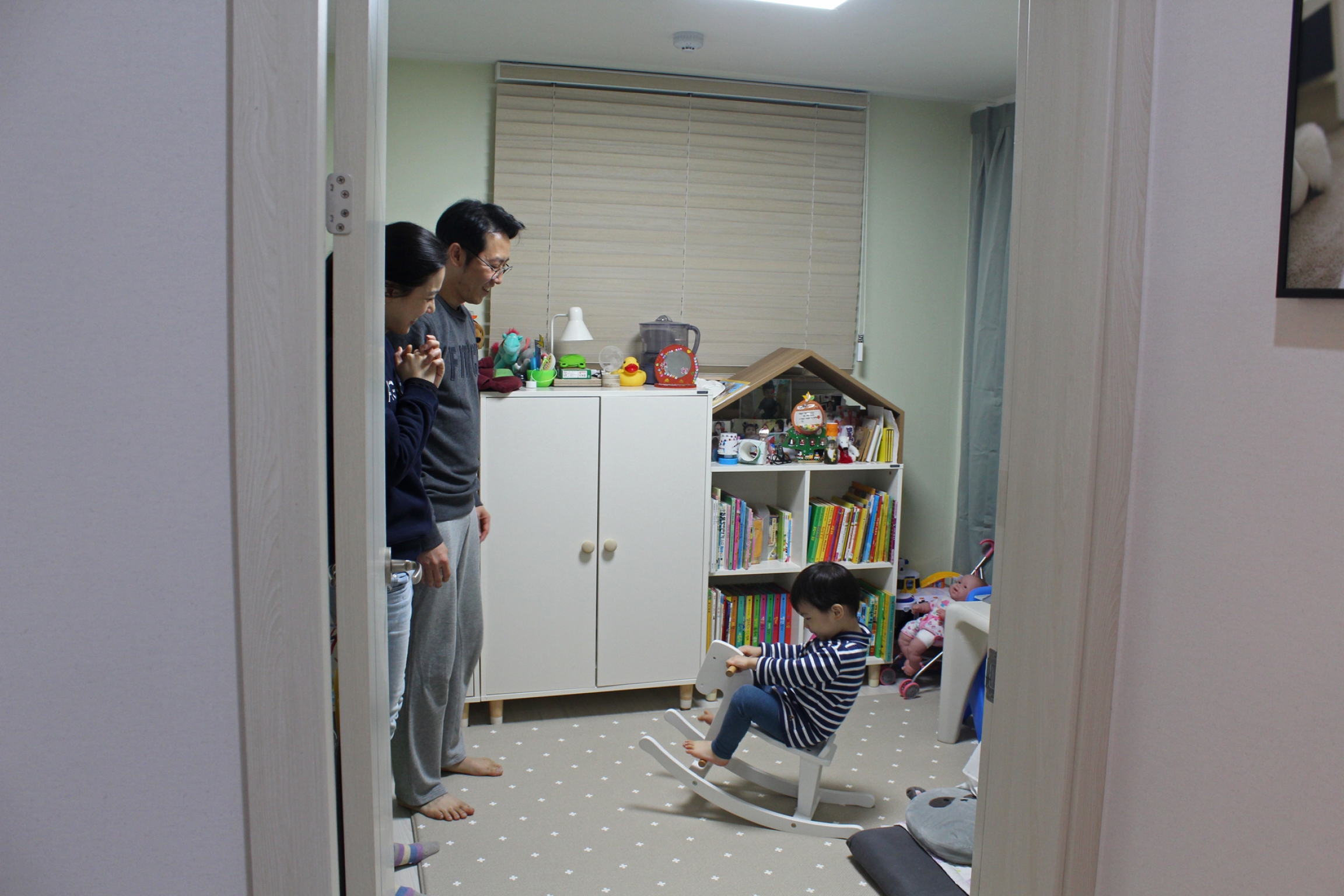 Seo Ji-hye and Cho Sung-won watch as their two-year-old son, Han-sol, rides a rocking horse in his bedroom in Seoul.

“I wanted to raise my son here because this is actually a very well-educated area, where kids can get good schooling,” Cho says. “I just want my kid to be normal — like anybody else — but it’s hard to be normal in Korea these days.” He means that parents like him must have a sizeable amount of money and a good job to raise a family.

But it’s not all number-crunching when they talk about their family’s future.

“Ever since I gave birth to Han-sol, I’ve just prayed that he becomes a person who has a lot of love to share,” Seo says. “Right now, he likes people very much — and I would like him to keep growing up to be the kind of person that, no matter what he does, he always gives love to people.”