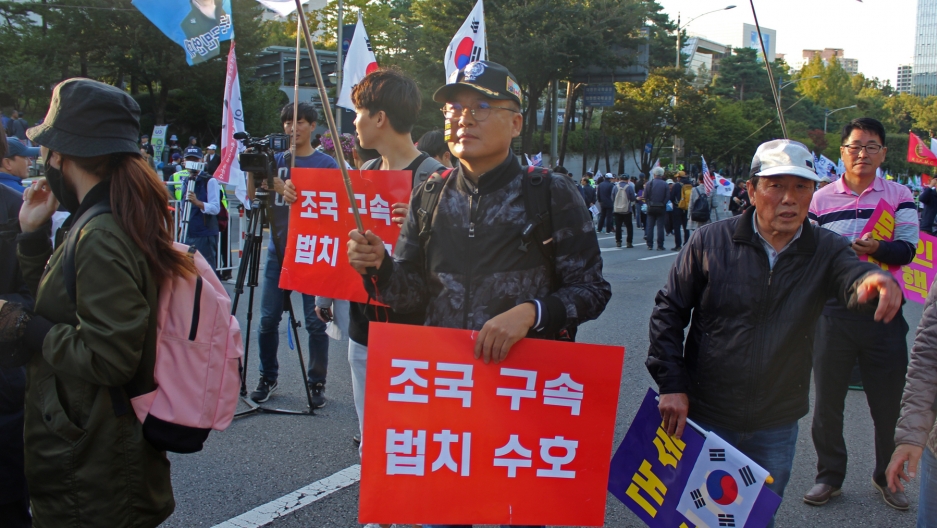 Anti-Cho Kuk protestors hold up signs that say, “Arrest Cho Kuk, protect the constitution,” during a rally on Oct. 12, against the ministry of justice who resigned from his position on Oct. 14.

South Korea’s highly-controversial justice minister stepped down on Oct. 14 after weeks of protests in Seoul, where hundreds of thousands of demonstrators showed up to call for his resignation — or defend him, despite troubling criminal accusations against his family.

Just days before on Saturday, crowds of protesters waved signs, danced and chanted in unison from the peak of a hill in Seoul’s Seocho district, for the fourth consecutive week in a row. Some cheered on President Moon Jae-in and his appointed justice minister, Cho Kuk, whose family faces numerous accusations of embezzlement and nepotism. Others demanded both politicians’ downfall.

“Cho Kuk violated our laws and he should be arrested. That’s our [point of view],” Kim Young-ho, 72, said while holding a sign depicting a pig with President Moon Jae-in’s head on it. “All of his family members are involved in [criminal activity] … We ordinary people — patriotic Korean people — are against Cho Kuk.”

“I’ve decided my family cannot cause such a burden to the president and the government ... My role up until now has been to trigger prosecutorial reform.” 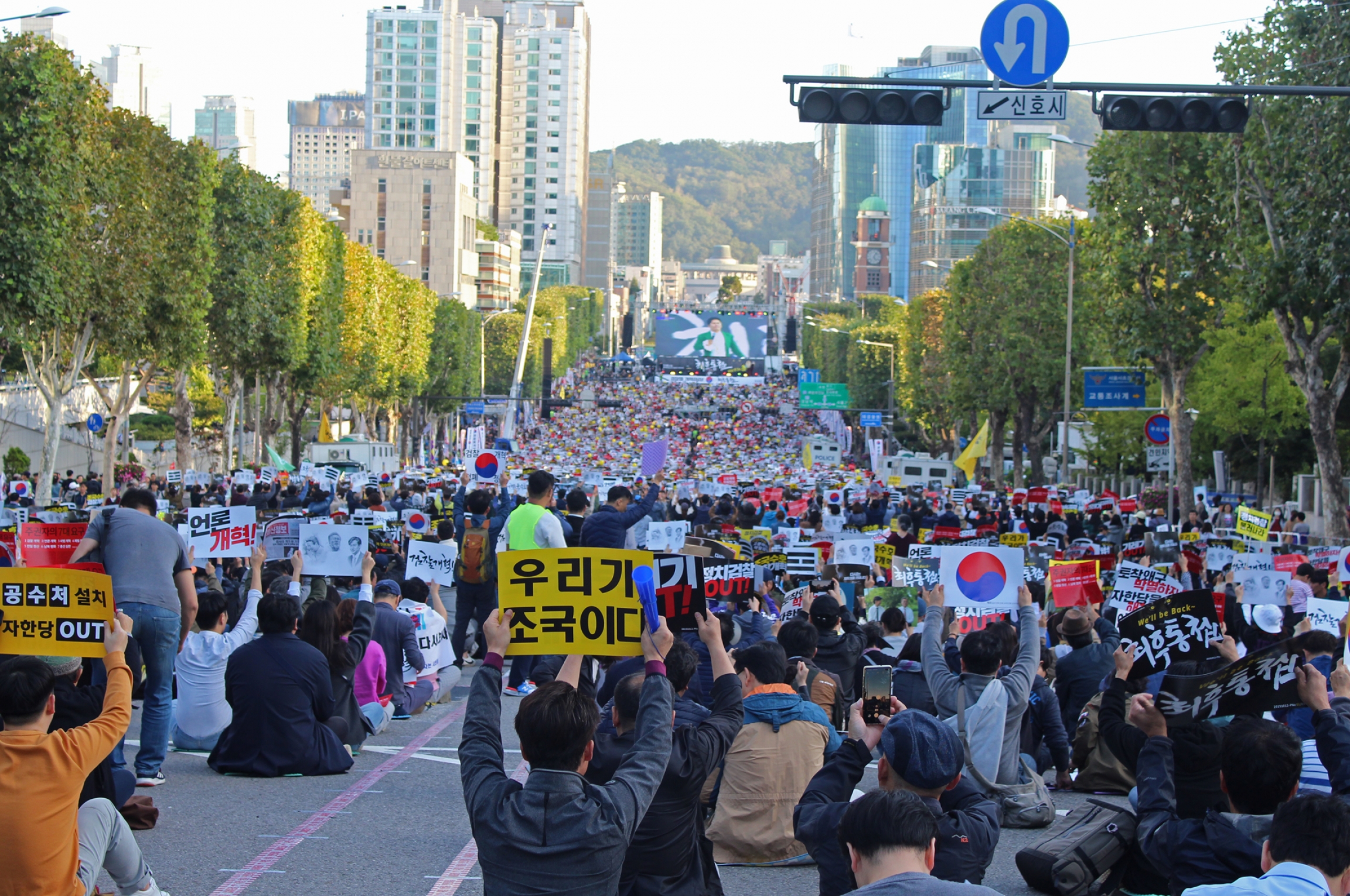 South Korean protesters hold up signs in favor of Cho Kuk, the Moon administration’s minister of justice who resigned on Oct. 14, after weeks of controversy surrounding his family. One sign says, “We are Cho Kuk.”

Weeks ago, reports surfaced accusing Cho’s family members of embezzlement. His wife, Jeong Kyung-sim, has been indicted for allegedly forging paperwork to help their daughter get into medical school. Though most allegations against Cho have so far gone unproven, Cho Kuk stepped down after two months of dominating headlines, stating (translated): “I’ve decided my family cannot cause such a burden to the president and the government ... My role up until now has been to trigger prosecutorial reform.”

The two-sided demonstrations have been compared to the famous 2016-2017 candlelight protests that brought down the previous South Korean president, Park Geun-hye, who was impeached after a major political scandal. The demonstrations for and against Cho Kuk signal the most intense national division during Moon Jae-in’s presidency.

It’s part of an ongoing national reckoning with corruption and South Korea’s privileged class as the country’s conservative bloc turns up the volume and tries to stage a comeback ahead of the upcoming 2022 presidential elections.

Related: Moon bets his legacy on meeting with Trump

“The attacks are getting more and more severe — it’s a really vicious political game in South Korea,” said C. Harrison Kim, a professor at the University of Hawaii at Manoa, and author of “Heroes and Toilers: Work as Life in Postwar Korea.”

“I think the South Korean public is finally seeing this entirely different world that elite people live in,” Kim said. 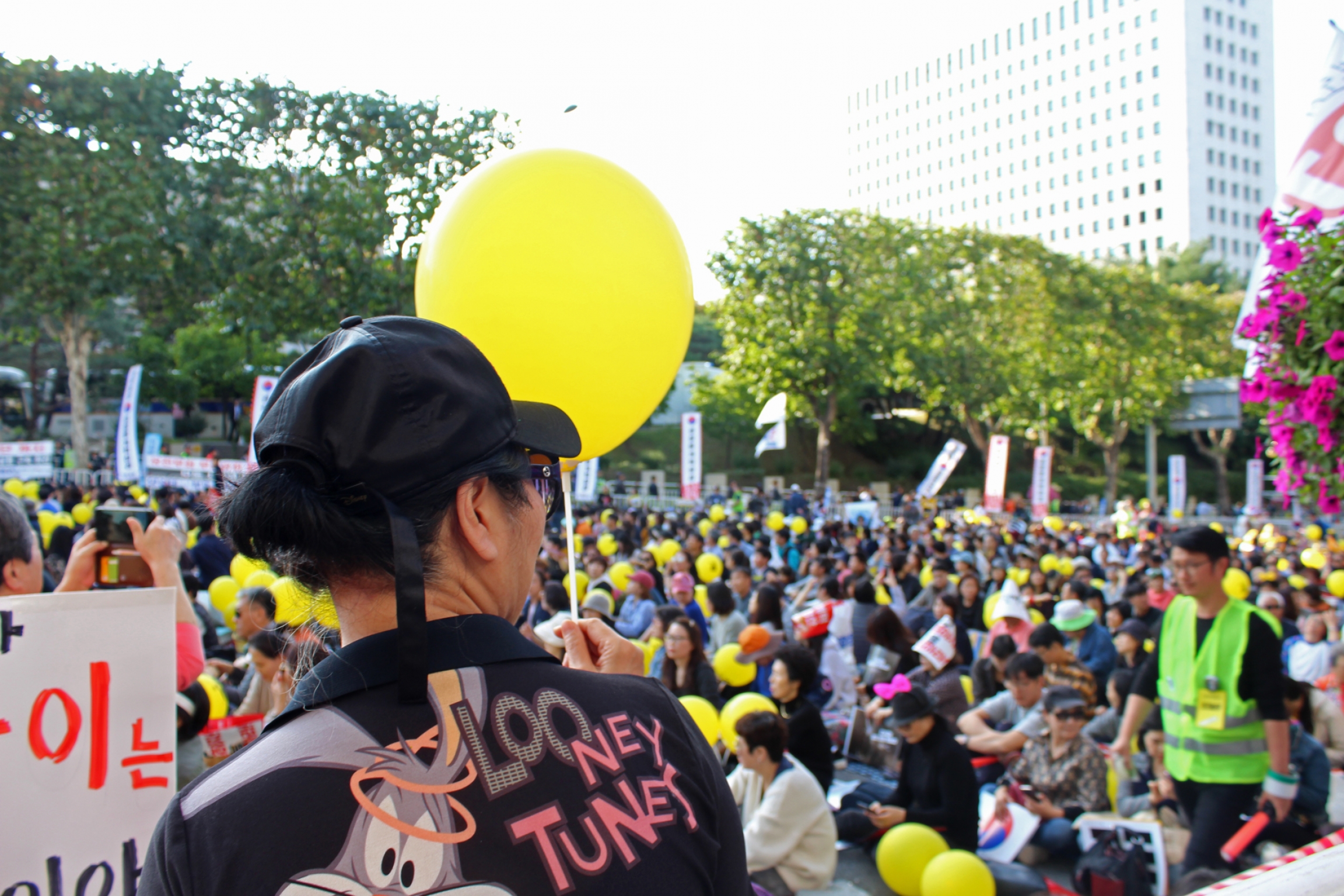 A South Korean protester holds up a balloon at a Seocho-area rally in favor of Cho Kuk, the Moon administration’s minister of justice who resigned on Oct. 14, after weeks of controversy surrounding his family.

Jeong Kyung-sim, Cho’s wife, is accused of fabricating a sealed certificate to influence her daughter’s admission to medical school and her daughter is mysteriously listed as the first author of a scientific paper as a high school student in 2018. Meanwhile, Cho’s cousin was detained at the airport on Sept. 15 under charges of embezzling money and other “suspicious financial activities.”

These stories are rocking South Korean society, much like the college admissions scandal rocked the United States when the FBI found evidence of powerful businessmen and actors paying off admissions counselors to get their children into college. "Desperate Housewives" actor Felicity Huffman, for example, was sentenced to two weeks in prison for paying $15,000 to rig her daughter’s standardized test scores, sparking national conversations over privilege enjoyed by the nation’s wealthy.

“It began with this reckoning, this realization that elite people — this circle that Cho Kuk belongs to — really live a different kind of life. They basically get whatever they want, go to the schools they choose, and even at the university level, they are able to control their destiny,” Harrison said. “For the majority of ordinary people, that’s not the case. The fact that it happened to someone like Cho Kuk, the candidate for the Ministry of Justice, did not sit well with people.”

Moon’s approval rating dropped to an all-new level to around 41.4% on the day of Cho’s resignation, signaling deep discontent among South Koreans polled.

“Because of Cho Kuk’s nomination, the approval rating of Moon Jae-in has dramatically gone down … Many people, even some Moon Jae-in supporters turned away and disagree with Moon’s decision,” Kim Yong-ho, a 66-year-old protester in Busan, said on Oct. 12.

But even despite the allegations, some demonstrators still protested in favor of Cho, who they see as unfairly accused.

“Nepotism is a big problem in South Korea — appointing people into inappropriate positions of power. ...We actually need more reform in our prosecution office, and Cho Kuk actually says he wants to do that … There are many accusations against him, but I haven’t seen any actual evidence surface.”

“Nepotism is a big problem in South Korea — appointing people into inappropriate positions of power,” said Han Hye-jin, a 26-year-old student demonstrator. “We actually need more reform in our prosecution office, and Cho Kuk actually says he wants to do that … There are many accusations against him, but I haven’t seen any actual evidence surface.” 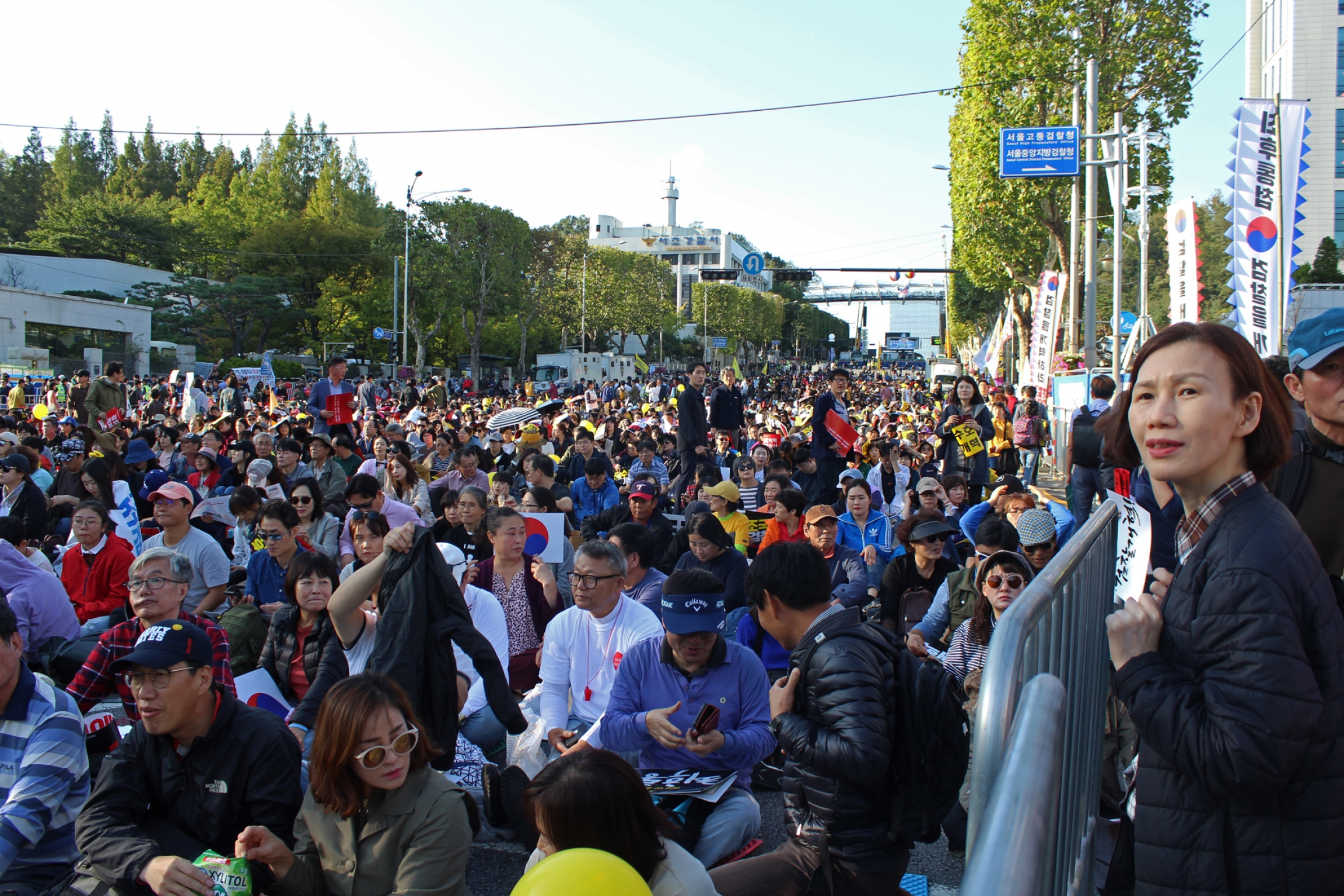 South Korean protesters rally in favor of Cho Kuk, the Moon administration’s minister of justice who resigned on Oct. 14, after weeks of controversy surrounding his family.

Whether Cho’s family is guilty or not, the scandal surrounding his appointment is no doubt a sign of the divisive political times in South Korea — especially ahead of the 2022 elections.

At the Oct. 12 protests, many pro-Cho supporters held up signs revering Moon Jae-in, while others called for the South Korean president’s impeachment.

“Cho Kuk is a potential successor to Moon. He’s a symbol of other potential successors,” said John Delury, a North Korea analyst and associate professor of Chinese Studies at Yonsei University in Seoul. “That’s why he has been attacked and defended so fiercely — because this is a dry run for the next election.”

On Saturday, street vendors stood along the sides of Seocho subway station and sold candles for protesters to hold up — a moment reminiscent of the massive protests that brought down former President Park. But the candlelight movement that led to impeachment came with much broader consensus among South Koreans, Delury said.

“The candlelight movement was an expression of true national consensus, whereas that’s not the case with these protests at all. Everyone participated in the candlelight protests — Park Geun Hye literally had around a 5% approval rating,” Delury said. “This situation is so divisive politically — and the two sides have totally different versions of reality.”

“The right-wing parties are looking at this opportunity as an opportunity to get the support of young people, who are protesting against people like Cho Kuk and who traditionally do not support conservative parties,” Kim said. “There are tangible consequences here for Moon.”