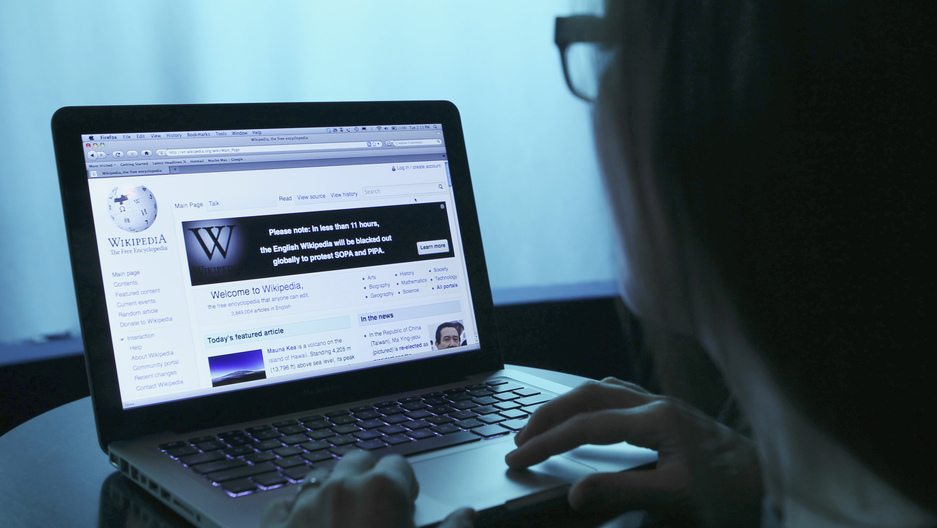 Wikipedia webpage in use on a laptop computer is seen in this photo illustration taken in Washington.

Giving internet users open access to a site that is meant to have accurate, up-to-date, multilingual information sounds like a recipe for disaster. And yet Wikipedia seems to be making it work.

The website, launched in 2001, continues to grow daily. According to its own statistics, every second there are almost 2 edits to the site by editors from all over the world. English-language Wikipedia contains nearly six million articles, and, on average, more than 570 new ones are added each day.

Andrew Lih, author of, “The Wikipedia Revolution: How a Bunch of Nobodies Created the World’s Greatest Encyclopedia,” and the Wikimedia strategist for New York’s Metropolitan Museum of Art, said Wikipedia’s growth can be directly attributed to its unique crowdsourcing model.

“Even if you tried to pay a crew to maintain a global knowledge base for 100-plus languages in a way that’s pretty darn accurate and timely… could you take a billion dollars and pay people to do that? I don’t think you could,” Lih said.

Some of the site’s volunteers, also called Wikipedians, spend hundreds of hours per month working on the site. Jim Hayes, a retiree and volunteer from Washington, DC, said editing Wikipedia is “better than golf,” but that there is also another motivation: cleaning up misinformation.

“Originally, I had to become a contributor because I had a high school friend who's a novelist, and his Wikipedia page said he's Italian, so I had to fix it. And then once I figured out, 'Gosh, I could fix the internet,' I had to fix it, and I couldn't stop,” Hayes said.

Another contributor, Betty Wills from Fort Worth, Texas, said that she spends “more time than I should” editing the site, but that it’s a “project of love.”

“The family feels neglected, the grandkids, the kids — 'Oh, you're always on the computer, mom.' And I am, but, at the same time, I'm learning, too, because you're reading an encyclopedia,” Wills said.

Lih said that there are even Wikipedians “who do nothing but grammar checking.”

In a so-called “post-truth” era, it seems like a big ask for a group to collectively agree on what a fact is, let alone for anonymous internet users to come to an agreement. But according to Lih, Wikipedians take a different approach. When it comes to what makes it onto the site, “it’s not about truth — it’s about verifiability,” he explained.

What that looks like in practice all comes back to citing sources and finding consensus in the community on what counts as a credible source. If readers ever want to dispute information on the site or see where disagreements have happened, they can check the “Talk” tab on any Wikipedia article. Lih compared it to looking at the back of a baseball card for extra details on a topic.

“It’s kind of fascinating because there’s a lot to be learned from there. You can see which points have been in dispute traditionally, and people discussing it back and forth,” Lih said.

However, despite all the internal policing that Wikipedians do, there are drawbacks to being an open-source website that allows anyone to edit. Wikipedia has come under fire in the past for a range of issues in its content, including hoaxes, hacking, vandalism, and a lack of diversity in editors and articles.

The community has taken steps to address these criticisms though. In 2015, Wikipedia launched a “Women in Red” campaign  — an effort to increase the number of biographies in the encyclopedia about women.

“When this project first started, less than 15 percent of all biographies on Wikipedia were about women, and this really was an appalling thing if you think about it,” Lih said. “Ever since that effort started… the needle has moved from 15 to 18 percent, which doesn’t sound like a lot, but think about that in terms of 6 million articles in the English Wikipedia, for example.”

Besides the increased representation of women on the site, Lih pointed out that the larger perception of Wikipedia is also transforming.

“Back in 2007, when Wikipedia was rising, you had famous essays from folks saying, ‘Why would we trust this site? Who knows who’s editing this site?’ And it’s gone from, ‘Wikipedia the sketchy, amateur encyclopedia,’ to, ‘Wikipedia, please save us from this misinformation in our ecosystem,’” Lih said. “I’m still astounded that we’re in that situation.”

Sarah Leeson is an associate producer at Innovation Hub.