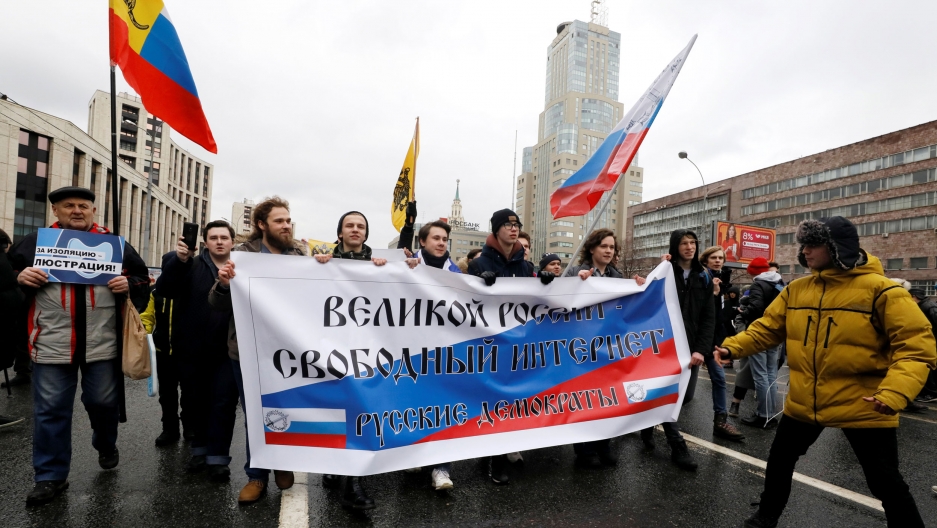 In Russia, surfing the web just became much harder.

A law known as the "sovereign internet" bill came into force on Friday, tightening state control over the global network, which free speech activists say will strengthen government oversight of the country's cyberspace. It was first proposed in parliament in February.

Related: Russia wants to build a 'parallel internet' in 2018

The legislation aims to route Russian web traffic and data through points controlled by state authorities and to build a national Domain Name System to allow the internet to continue working even if Russia is cut off from foreign infrastructure.

The bill's authors have said that the measures are needed to defend Russia after the United States adopted what they described as aggressive, new cybersecurity policies last year.

"The law is in line with the tendency we've been observing over the past seven years," said Sarkis Darbinyan of Roskomsvoboda, a group that fights censorship in the internet and promotes freedom of information. "This is the movement towards strict regulation of the internet space, which scares the authorities."

Russian authorities have in recent years adopted a series of rules such as stricter regulations on public protests, tightening their control over society, effectively giving more powers to President Vladimir Putin, a former KGB operative.

The Russia government banned the Telegram instant messaging service and moved last year to block it, but the attempt failed and the service is still popular and widely used.

Digital Rights Center, a Russian group of cyberlaw attorneys, also said the testing of the "sovereign internet" law has not been successful so far because of a number of technical challenges.

Justin Sherman, a cybersecurity policy fellow at the New America think tank in Washington, DC, spoke with The World's Carol Hills about what the law means for browsing the net in Russia.

"It essentially does two main things," Sherman said. "The first is give the Russian government greater legal control of the internet service providers and the internet architecture within Russia. And the second main element of the law is encouraging those entities or, in some cases, forcing those entities, to take technical measures that will allow the government to isolate the Russian internet. They essentially want to have a switch where if they think the Russian internet needs to be completely cut off, they can do that on the technical level. And so, it will still function internally, people can still communicate, but nothing outside can get in, nothing inside can get out."

Carol Hills: So, how does this actually work? Say, if you're in Moscow today, what's going to be different from yesterday?

Justin Sherman: Right now, not really anything. It's one thing to pass a law. It's quite another thing to actually technically execute something as complicated as isolating your country's internet. So, while the Russians have started to do some things in this vein, they have not nearly gotten to where they want to be. And so, at least for the next few weeks, it really will not look too different, I don't think.

Related: The man who taught the Kremlin how to win the internet

So, companies have to do this, not individual users?

This has nothing to do with individual user implementation, no. This is the government going to the companies that actually control the physical hardware and the software layers of the internet itself so that they can isolate information flowing to and from the users on that network.

How does what Russia is doing compare to China's internet firewall?

China and Russia can be compared generally. They both have what we call a sovereign and controlled approach to the internet. They see it as something that needs to be much more managed by the state than we often see in many liberal democracies. But I would argue that that's about where it stops. China's internet strategy is fundamentally oriented towards balancing the economic benefits of internet openness with the political and security benefits of internet control. So it's sort of a tricky wire they try and walk there. Russia is a little bit different because Russia's economy is not nearly where China's is, particularly in the tech sector. And so, in Russia, they lean a lot more towards caring about the political and security elements.

I mean, how effective is this likely to be?

That's the key question here. And Russia has struggled, particularly compared to China, which, as you said, is sort of the gold standard of internet filtering. Russia's really struggled to achieve anything near the same level of sophistication and scale. They haven't been doing this as long as the Chinese — this internet filtering stuff. The technical capabilities are not there. They don't have the human and financial resources that the Chinese do. For that reason, it's very likely that there are going to be a lot of stumbling blocks here. We've seen that already because Russia had talked about doing some sort of disconnection test between May and now, and that has not manifested.

Is this new law likely to have any impact on Russia's disinformation campaigns?

I would argue, yes. They're already doing a lot in this space. Add that to the fact that they might feel more insulated from what the rest of the world can do to them, I think that would only lower their disincentives to do disinformation campaigns and cyberattacks and things of that nature.