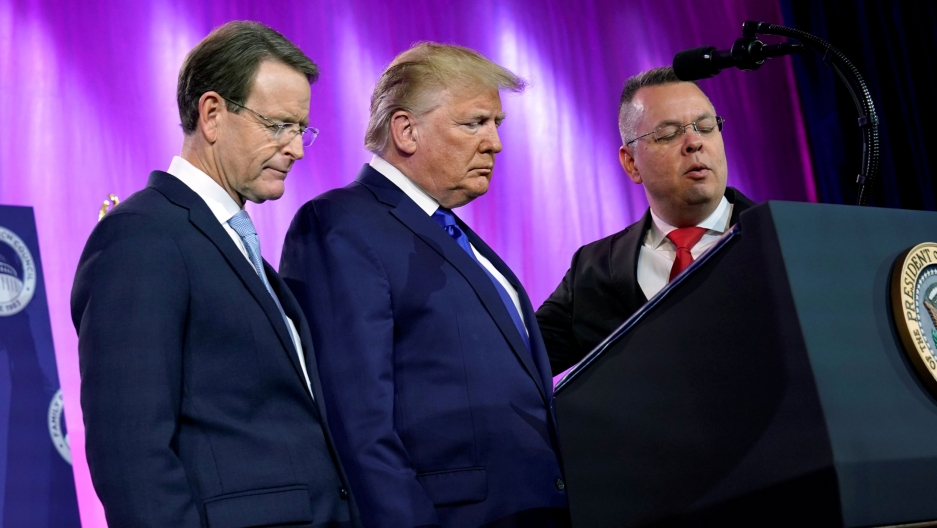 US President Donald Trump's unilateral withdrawal of US troops from Syria in October drew widespread condemnation for abandoning Kurdish allies to a Turkish invasion.

But it was concern for a different group of minorities — and the 2020 election — that helped to usher in a ceasefire.

White evangelicals — a demographic Trump overwhelmingly carried in 2016 — instantly opposed the US withdrawal. From the early days of ISIS, areas under Kurdish control have provided sanctuary for Christians and other religious minorities fleeing persecution — groups that have special importance to American evangelicals.

“The Kurds have been more tolerant of religious minorities than anyone in the region,” said Richard Land, a member of the White House evangelical advisory board.

After soliciting private input from some members of that advisory board, the White House walked back its position in Syria and quickly dispatched a delegation to secure a ceasefire — led by the two top evangelicals in the administration, Vice President Mike Pence and Secretary of State Mike Pompeo.

White evangelical concerns have a major impact on the policy decisions in the administration, especially as the 2020 election nears. With the escalation of the impeachment inquiry into his foreign policy with Ukraine, Trump’s strategic timelines have shortened dramatically. Like Nixon during Watergate, he needs daily Congressional protection, making any reason for defections — such as the evangelical response to the withdrawal — a crisis.

Related: Key moments in the impeachment inquiry before a House vote Thursday

What remains to be seen is whether Trump’s foreign policy blunder becomes an ongoing political weakness at a time when he can scarcely afford it — and help pave a road to impeachment. Answering that requires understanding why the withdrawal from Syria caused white evangelicals to turn on Trump — and what would cause them to turn on him again.

Legacy of the Iraq War

White evangelicals’ concern for religious minorities in the Middle East stemmed from relationships built during the 2003 US invasion of Iraq. The Southern Baptist Convention (SBC), in particular, formed part of the Bush Administration’s war effort, helping make the case for the invasion and participating directly in the reconstruction effort. Even before Operation Iraqi Freedom began, the Southern Baptists’ missions board had initiated planning for Operation Joshua, a campaign of evangelism through development projects.

So when proto-ISIS forces launched the first attacks in a wave of anti-Christian violence in 2004, Southern Baptist missionaries began dying alongside their Iraqi Christian partners. Attacks on churches escalated sharply in the summer of 2005, when Sunni militias coordinated bombings at five churches in Baghdad and Mosul. The groups who claimed responsibility for the attacks said they were targeting Iraqi Christians as collaborators with the occupation regime.

A decade before the rise of the Islamic State, Iraqi Christians suffered its predecessors’ first attempts at the brutal enforcement of their version of Islamic law through gang violence. Southern Baptists, still in Iraq long after the Red Cross evacuated over security concerns, witnessed it firsthand.

By the end of 2006, more than 4 million Iraqis had fled their homes, about half seeking asylum in Syria and Jordan. According to the UN High Commission on Refugees, 44% of refugees entering Syria were Christians. Prior to the 2003 invasion, Christians had made up 6-8% of the Iraqi population.

The Southern Baptist Convention (SBC) spent the next decade trying to help Christians and other religious minorities return to the region. But as sectarian war fostered the rise of ISIS, their attention turned to minorities fleeing the caliphate, as well. Southern Baptists helped pressure the Obama administration to declare ISIS’ actions against Christians, Shiites and Yazidis a genocide, triggering an international legal right of return for members of these religious minorities, many of whom remained in the areas of Iraq and Syria controlled by the Kurds, with US backing.

When Trump withdrew that support in October, he unwittingly touched deep fears among white evangelicals about the fate of these minorities, especially the Christian communities with whom they had worked during the occupation.

“If there will be any remnant of historic Christianity left in the Nineveh Plain, it will be because of the Kurds,” said Travis Wussow, who serves on the SBC's ethics board and led its first international office in the Middle East.

Now, with the US no longer in the picture, even if displaced families can someday return, “no one knows who will be in charge of historic Christian homelands [or] adjudicating property rights disputes between displaced families and those now occupying their homes,” Wussow said. The deal negotiated by the Pence-Pompeo delegation puts Syria, Russia, and Turkey in charge of those homelands for the foreseeable future.

That deal, along with a strong but brief period of sanctions on Turkey, has calmed the fears of evangelical leaders. They dislike the terms of the deal, but acknowledge Trump’s need to follow through on a campaign promise to withdraw from a messy situation.

A best-case outcome in the region, according to Richard Land, a member of the White House evangelical advisory board, could be analogous to Palestine following the 1949 Arab-Israeli ceasefire. Sides “were not actively killing each other. They wanted to kill each other, they were preparing to, but they were not actually doing so again until Suez seven years later,” Land said.

But two potential flashpoints may remain. First, if the situation in Syria deteriorates, white evangelicals will be watching carefully for religious minorities again becoming targets. In particular, they would likely demand a response to any attacks that would cause the last Christians to flee communities where they have lived for thousands of years. In short, if it goes like Iraq.

Second, in the event that return becomes impossible for religious refugees from Syria, white evangelicals would likely advocate for resettling many of them in the United States.

“The most likely to suffer in the rolling catastrophe that is the Syrian Civil War are religious minorities,” said Land, regarding Christian resettlement. “On purely humanitarian grounds, I would put them at the front of the line.”

If Trump chose to oppose such a resettlement program, he could again unwittingly draw evangelical ire.

But for the moment, Trump’s reversal has assuaged the fears of his most faithful defenders — important, when domestically he needs them most.

Randy Thompson is a senior fellow in religious literacy at the University of Washington. Randy has a doctorate in international studies, in which his research focused on the Southern Baptist Convention and foreign affairs, before during and after the War in Iraq.