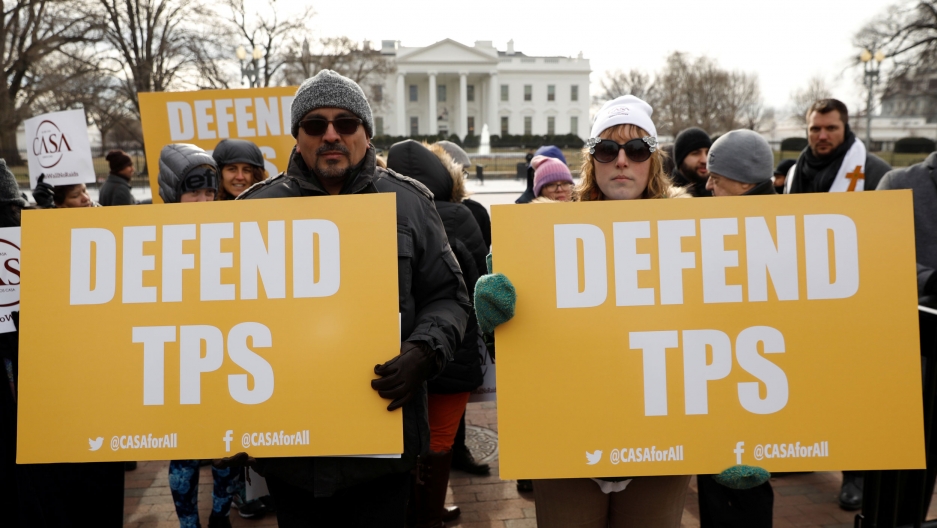 Demonstrators hold signs protesting the termination of Salvadorans' Temporary Protected Status in front of the White House in Washington, DC, on Jan. 8, 2018.

Jose Palma felt conflicted when he heard the announcement Monday that the Trump administration would extend his work permit under a program called Temporary Protected Status by one year, to January 2021.

The news, he said, was “bittersweet.” While it gives him more time in the US, it leaves his future unresolved. And it means nothing for hundreds of thousands of other TPS holders from Honduras, Nicaragua, Haiti, Nepal and Sudan. 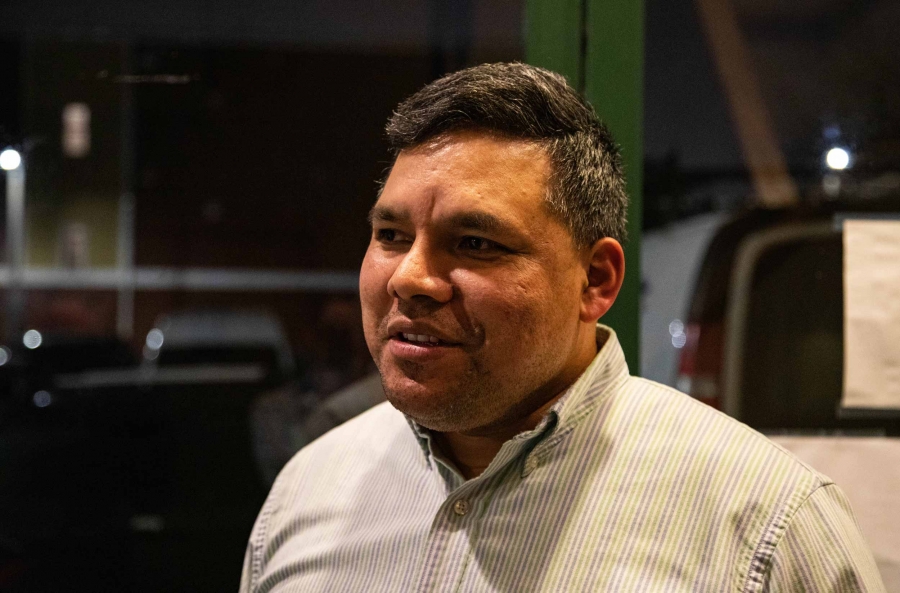 Jose Palma, a TPS beneficiary from El Salvador who has legally resided in the US for two decades, is the coordinator of the National TPS Alliance and helped build a nationwide movement from scratch in the last year.

In his role as director of the National TPS Alliance, Palma has spent the last two years — ever since the administration said it would end TPS designations for those six countries — calling for permanent residency for them all.

“I think for anyone who has TPS, hearing that she or he will be protected for one or two years, it is a relief,” Palma said. “But you want everyone else to be protected, too.”

Palma, who has legally resided in the Boston area for two decades, is the father of four US citizen children and the legal guardian of a young nephew whose father was deported to El Salvador.

An extra year in the US, he said, would merely prolong the difficult decision he and his wife may soon need to make on whether to uproot their family to a country they no longer know — one that consistently ranks among the most dangerous countries in the world.

Other TPS holders could soon find themselves in a similar predicament: The Trump administration gave TPS holders until January 2020 to leave the country. That deadline depends on a court case; a decision from the Ninth Circuit Court of Appeals is still pending.

The US and El Salvador made the joint announcement Monday with a video on Twitter featuring Ronald Johnson, the US ambassador to El Salvador, alongside Salvadoran President Nayib Bukele.

“Today in Washington, we signed an agreement which extends the TPS for the Salvadorans in the United States for another year,” Johnson said in the video.

Bukele, a millionaire businessman who cast himself as a reformer, has expressed admiration for President Donald Trump and has shown determination to better US-Salvadoran relations. Bukele took office in June. He, along with Salvadoran Foreign Affairs Minister Alexandra Hill Tinoco, characterized the plan as a victory for his administration that buys more time for Salvadoran citizens in the US to find a permanent solution.

“They said it was impossible — that the Salvadoran government couldn’t do anything,” Bukele wrote on Twitter. “ But we knew that our allies would not leave us on our own.”

The US struck a decidedly different tone, stressing that it still expects Salvadoran TPS holders to leave.

“The Administration’s goal is to create an orderly and responsible process to repatriate Salvadorans and help them return home,” the Department of Homeland Security said in a press release. Returning all 250,000 to El Salvador too suddenly could “could spark another mass migration to the US and reinvigorate the crisis at the southern border.”

The US will also deploy DHS officials to El Salvador to “advise and mentor” their Salvadoran counterparts. The two countries will also “enhance cooperation to prevent and combat crime and other threats to public security through the expansion of biometric data collection and information sharing.”

Related: How Trump’s bilateral deals with Central America undermine the US asylum system

For weeks, Trump administration officials had said extending TPS was not on the table as they negotiated deals with Central American nations to take back asylum-seekers or contemplated resuming foreign aid. That’s why Monday’s announcement was something of a surprise.

For activists like Palma, who was in Washington, DC, when the announcement was made, the fight is not over.

Congress created TPS in 1990 to allow nationals from countries devastated by war or natural disaster to live and work legally in the US. It is not a pathway to permanent residency or citizenship. At least 200,000 Salvadorans hold TPS — by far the largest group of beneficiaries. 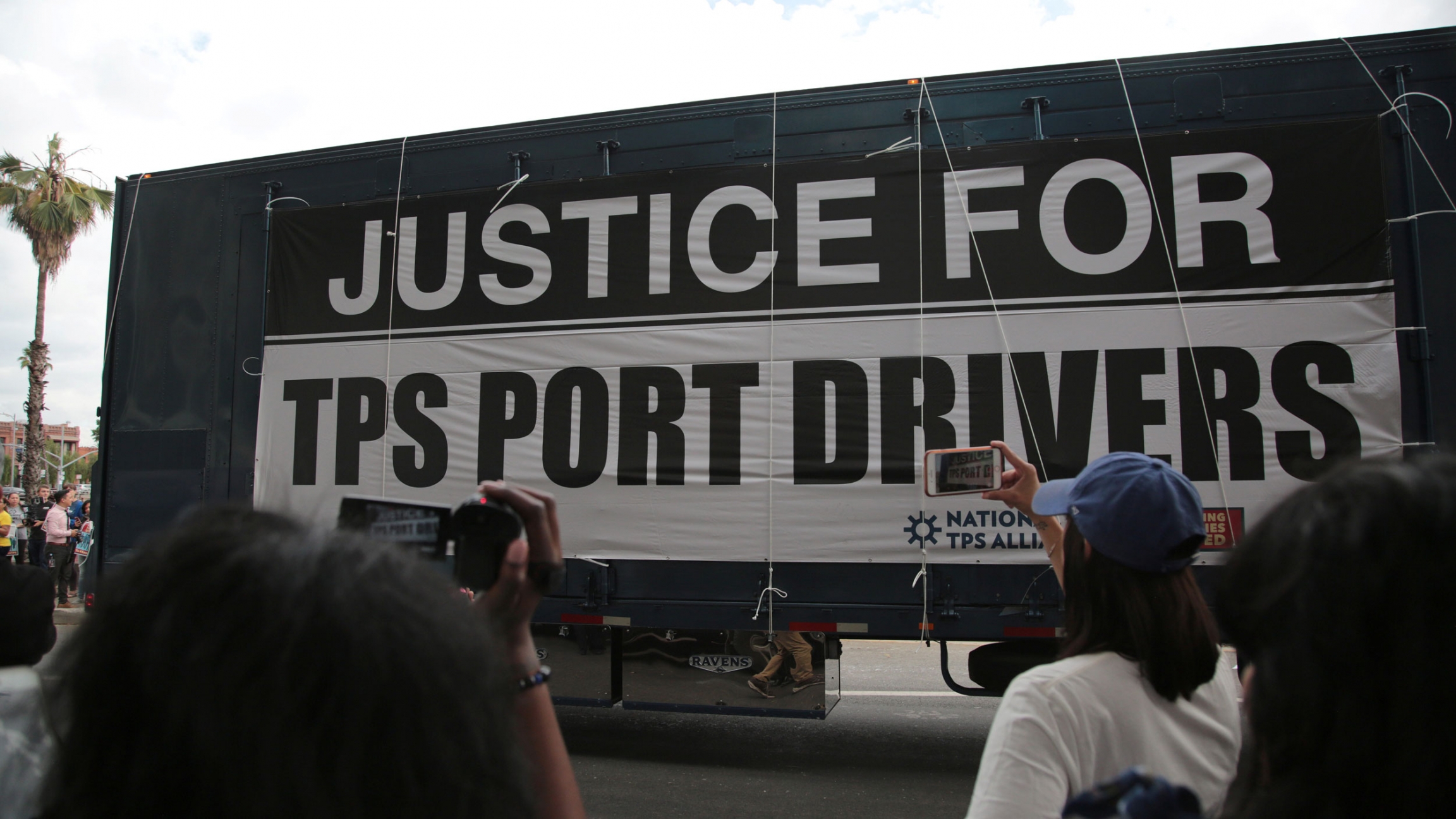 Protesters watch as members of the Teamsters Union participate in a tractor trailer caravan surrounding the LA Metro Detention Center in support of port truck drivers and others threatened by deportation if the courts or congress don't stop the termination of Temporary Protected Status in Los Angeles, on Oct. 3, 2018.

Related: After 17 years of 'legal life' in the US, a family considers its next move

Most Salvadoran TPS holders have been living in the US since two earthquakes ravaged the country in 2001. The provisional protection has been renewed on an 18-month basis ever since — until the Trump administration announced termination of TPS for nationals of six countries in a series of announcements last year.

Monday’s rollout was characterized by mixed messages from different parts of the US government. Though Johnson, the US ambassador, said the US was extending TPS for Salvadorans, acting head of US Citizenship and Immigration Services Ken Cuccinelli disputed that description.

“[T]hat's not what happened w/ the agreements,” Cuccinelli wrote on Twitter. “Rather, work permits for Salvadorans will be extended for 1 year past resolution of litigation for an orderly wind down period.”

Immigrant advocates have urged Salvadorans to await more information before cheering the news.

In August, the Ninth Circuit heard oral arguments in Ramos versus Nielsen, the class-action lawsuit brought by TPS holders and their US citizen children to challenge the Trump administration's termination of TPS. Monday’s announcement likely will not affect the lawsuit, said Ahilan Arulanantham, lead attorney for the ACLU, which filed the case on the TPS holders' behalf.

“It doesn’t render the lawsuit moot or change it in any other way. It just changes the wind-down period for this one group,” he said. “While this [is] good, although temporary news for Salvadorans, it doesn’t do anything for the other people who have lived here lawfully for more than 15 years, many of them for more than 20 years.”

The Department of Justice did not respond to The World’s request for comment.

“We have to give credit to the government from El Salvador for doing their part. But it's also true that the only reason why we're still protected is because we have been doing our part, and we have been pushing them harder to do their jobs.”

The plan for Salvadoran TPS holders “speaks volumes” about Bukele’s efforts to better his country’s relationship with the United States on the issues of migration and security, said Ariel Ruiz Soto, a policy analyst with the Migration Policy Institute.

And this could end up being a bigger win for Salvadorans down the line, he added.

“They get another year. But what’s more important than this is this actually provides more time for the TPS program to continue if there’s a change in [US presidential] administrations,” Ruiz Soto said. “And I think, therefore, it’s a significant outcome for El Salvador.”

Palma, for his part, has vowed to keep pushing for a permanent solution.

“We have to give credit to the government from El Salvador for doing their part,” Palma said. “But it's also true that the only reason why we're still protected is because we have been doing our part and we have been pushing them harder to do their jobs.”