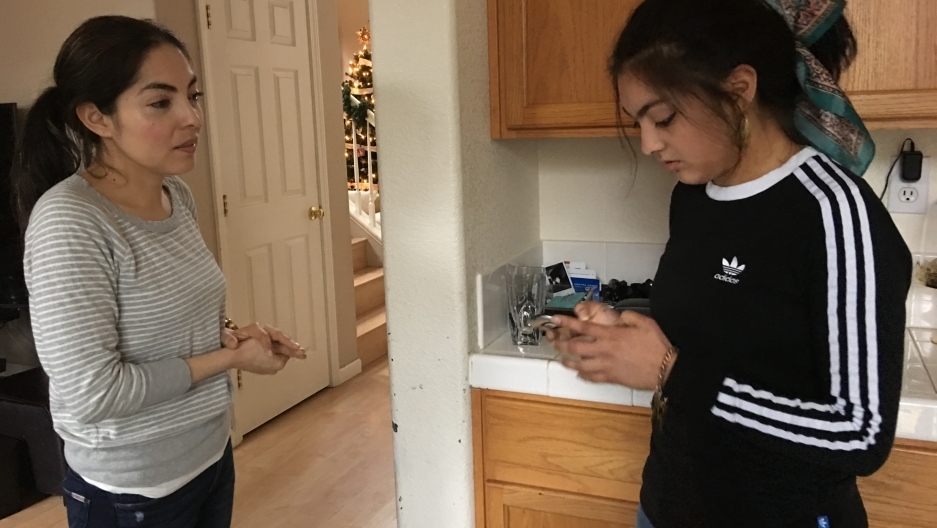 For Arianna, on the right, the end of Temporary Protected Status (TPS) means that her parents could return to El Salvador as she heads off to college. On Monday, Jan. 8, 2018, the Trump administration announced the end of the federal immigration program that has allowed her mother Vanessa Velasco, left, to live and work in the US since 2001.

The official announcement landed early Monday morning. Vanessa Velasco received a 7 a.m. text from a friend, also from El Salvador. The Department of Homeland Security (DHS) will end a program that has allowed Velasco and her husband, her friend, and more than 200,000 Salvadoran immigrants to work and live in the US without fear of deportation.

Velasco was not surprised. Neither was her husband.

“We were prepared for this, hoping it was not going to happen, but at the same time expecting it,” said Enrique Velasco, as he sat next to his wife on a puffy brown sofa at their home in Brentwood, California.

Brentwood is a small, rural city filled with farms and orchards, an hour east of San Francisco. It is the place the Velascos and their three children — Andres, 4, Dayana, 12, and Arianna, 17 — have called home for more than a decade.

The couple’s life in the US started in 2000. They left El Salvador on tourist visas; Vanessa was 19 and her husband was 20. High school sweethearts, they say they wanted to see the US and explore a different life.

“Things were going from bad to worse in El Salvador,” Enrique said, referring to the country’s rising gang violence and deep poverty.

Then, months after they arrived, a series of devastating earthquakes hit El Salvador. Salvadorans in the US were offered refuge, the chance to stay and work through a government program called Temporary Protected Status, or TPS. It was created by Congress in 1990, and signed into law by President George Bush, with the goal of providing safe haven for immigrants when war, a natural disaster or an epidemic make going back home too dangerous.

Over the years, as the Velascos were able to renew their protected status and put down roots, they had children, all three of whom are US citizens. They are halfway through the mortgage on their three-bedroom home. Enrique found niche work restoring historic buildings and landmarks, while Vanessa raised and help home-school their children.

“You know, we always heard about a possibility of some kind of legalization and reform on immigration. We were hoping something was going to happen,” she said.

Now, the Donald Trump administration is giving these parents until Sept. 9, 2019, to leave the US or find another way to stay. In a statement, DHS said that “the original conditions caused by the 2001 earthquakes no longer exist. Thus, under the applicable statute, the current TPS designation must be terminated.”

Immigrant rights advocates argue that while that may be true — roads and homes damaged by the earthquake have been repaired over the years — new dangers remain, namely the country’s intense gang violence, fueling one of the world’s highest murder rates.

“We are first place in the worst way in Latin America,” Vanessa Velasco said. “The gangs have taken over. My family says, ‘You can’t come back. You’re going to bring your kids here? They don’t know this country, and they are doing well in the US. It will set them back.’”

The decision affecting Salvadorans follows the recent end of TPS designation for other long-time immigrants in the US, including Haitians, Hondurans and Nicaraguans. In May, three countries in West Africa lost their protected status, a decision made by the Obama administration. Salvadorans make up the largest TPS group and have been in the US for 17 years, a longer time than other immigrant groups who received TPS.

“These are really refugee-like populations,” said Donald Kerwin, executive director of the Center for Migration Studies of New York. “But there's no permanent solution for them for many of them, and there ought to be. There should be some mechanism that would allow people to adjust to lawful permanent residence status after showing good moral character and length of time in the country.”

“We need to take into account their contribution to this country, to social security, the taxes they pay," said Lariza Dugan-Cuadra, executive director of the Central American Resource Center in San Francisco. "It’s important that we ask ourselves how does this community enrich our country?”

Vanessa Velasco sees it this way: “They allowed us to make a life here, 17 years of a legal life. And now suddenly they are going to take everything away from you?”

As the deadline looms, the family will consider petitioning for asylum or seek other routes to stay in the US.

“We will find a lawyer. We will try to find a way, but we know it will be tough,” Enrique said. “We’re going to be counting every month, putting everything in order and hoping that something changes.”

Also: A migrant from El Salvador gets her chance in immigration court

Enrique's eldest child, Arianna, sat next to him. She is a high school senior and recently sent off college applications, including to the University of California, Berkeley. Arianna wants to study political science. For her, the end of TPS means that her parents could return to El Salvador — a reality they consider a “last resort” but one they say they will take before living in the US without papers. They refuse to face the daily stress of possible deportation. They would take their two younger children with them, and Arianna would stay behind alone.

“It’s for real,” Arianna said. “I realize I have got to be strong during this point. I have to continue with my studies, to take care of myself, of them, wherever they are.”

More: These American kids are adapting to new lives in El Salvador after their dad was deported