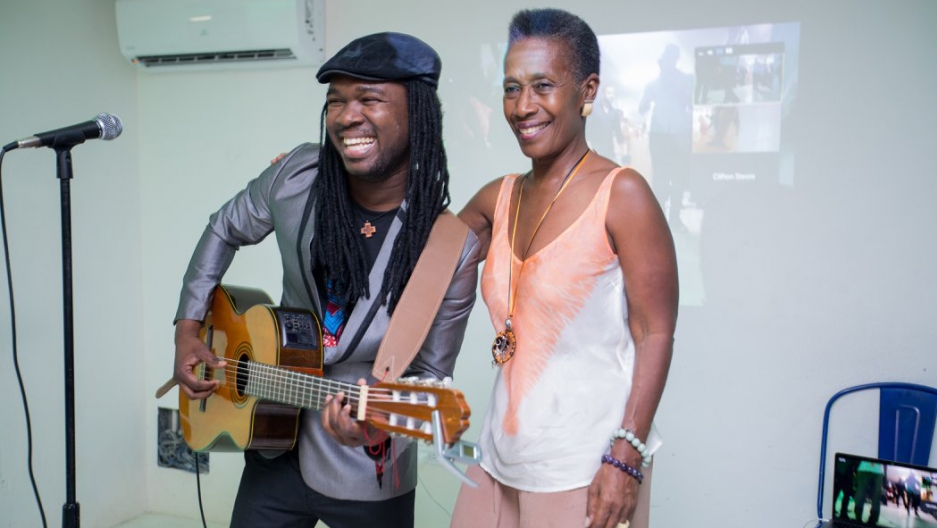 Jean Jean Roosevelt and former Haitian Minister of Commerce Danielle Saint-Lôt, founder of the Haiti Women's Foundation, perform together at Banj, a co-working space in Port-au-Prince that opened in 2017.

Marc Alain Boucicault has a vision for Haiti. It’s one that comes from experience at home and in the US, and one he hopes other Haitians who return to the island can get on board with.

Boucicault grew up in Haiti and went to Washington, DC, with the support of the US government’s Fulbright program for international exchange in 2013. He worked as an economist at the Inter-American Development Bank while attending American University. Even from abroad, his country was always close. He worked in the IDB’s Haiti department, focusing on long-term recovery from the 2010 earthquake. In his free time, he launched ELAN, a professional network of young innovators and entrepreneurs from Haiti and its diaspora who are interested in improving the economic outlook of their homeland.

Had his employers let him, he would have applied for another visa and stayed in Washington. Instead, in 2015, they sent him home to their Haiti office where they hoped he could have a more direct impact.

It was a well-paying job, and he kept ELAN going on the side, but Boucicault says he needed a radical change. Last summer, he found it while attending Haiti’s first Tech Summit, an event that brought together entrepreneurs, innovators and influencers to create a startup industry on the island. That same week, Boucicault left the IDB to launch a coworking space called Banj, which means “genius” in Haitian Creole.

“These are all elements of the ecosystem that need to come together to build entrepreneurship the right way,” he says, noting that returning emigres bring fresh perspectives and ideas.

“A lot of the diaspora didn’t choose to be diaspora,” says Boucicault. He says Haitians who were raised abroad are often conflicted by beautiful Instagram images of their homeland and the horror stories of poverty, violence and corruption chronicled by the press. “They’re in the middle of those things looking for answers.”

But access to the internet, computers and even electricity is still limited in Haiti, and that’s where Boucicault saw the potential of a shared co-working space to help entrepreneurs adapt to those limitations. It wasn’t long before Sogebank, one of Haiti’s largest commercial banks, offered him the space in Port-au-Prince, and Google and Facebook signed on to provide technical support.

Banj has a modern, air-conditioned facility in the center of Port-au-Prince on Delmas Street, which runs from the city’s port all the way up the mountain into the upscale Petionville business district. Inside, entrepreneurs who rent space there share tech skills and a burgeoning sense of excitement over Haiti’s growing tech scene and its potential for transforming the economy. Banj has 30 members representing a wide array of startups — among them FinTech Haïti, a mobile cash transfer system, Tamy, a private taxi service, and Kreyol Essence, a Haitian beauty products line. It has space for 70 more people. Boucicault hopes the members will generate more enthusiasm for Haiti among the diaspora. 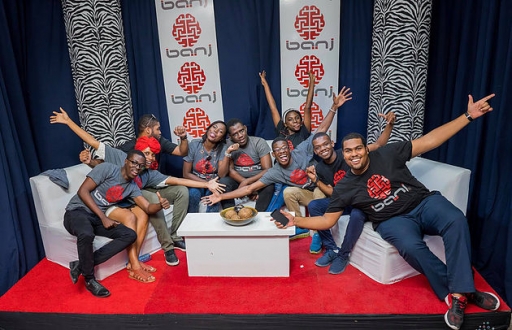 Marc Alain Boucicault, on the far right, grew up in Haiti, spent some time working and studying in the US, and then started the Banj co-working space in Port-au-Prince in 2017. His long-term vision is to get Haitians at home and around the diaspora collaborating on entrepreneurial projects that can improve the country's economy.

“Seeing people in Haiti doing what they love and being active on social media and showing a different lifestyle triggers their curiosity and they want to give back,” Boucicault says. “There’s more trust because its millennial to millennial, and it’s sexy."

Boucicault’s project is just one sign of how technology is starting to transform his Caribbean homeland’s market — and it comes at a crucial time. Most of the aid groups that rushed into help Haitians following the 2010 earthquake have left and, by next summer, the island may have to absorb as many as 58,000 Haitians who once sought refuge in the US using Temporary Protected Status (TPS). The Trump administration announced in November that the program, which granted Haitians already in the US the chance to stay and work, will end on July 22, 2019.

In Haiti, joblessness and precarious informal employment is rampant. It is the poorest country in the Western Hemisphere, underlining the urgency for new economic initiatives.

“To be able to reinvent the Haitian economy, we’re going to need to reinvent who we are. That comes from accepting who we are, and then building on that, leveraging the resources that are in the diaspora or around the world to change the Haitians’ way of living and thinking,” says Boucicault.

When she’s in Port-au-Prince, Yve Car Momperousse has a desk at Banj. Car Momperousse was born in the US and was raised for some of her childhood in Haiti. In the US, she struggled to find traditional Haitian castor oil, used to heal damaged hair and skin. A graduate of Cornell University, Car Momperousse had been working as the school’s director of alumni diversity, but quit in 2014 to launch the beauty line Kreyol Essence with her husband and business partner Stephane Jean Baptiste.

Today, they employ 300 Haitians who grow the seed, then extract and package its oils. Car Momperousse and her husband travel between Miami and Haiti, promoting their product through social media, selling it online, and also distributing it to companies such as Whole Foods and Sephora.

“Deforestation, greenhouse gas emissions — there were multiple things that could be solved through having a steady business,” Car says. “We’re exporting a product that helps Haiti’s GDP because often there’s an imbalance in trade between import and export. We’re marketing a beauty product, not marketing poverty or donations. It’s something that’s good for the producer and the consumer.”

Over the next 5 to 8 years, they hope to employ 1,000 Haitians — including, Car Momperousse hopes, some of the returning TPS recipients. 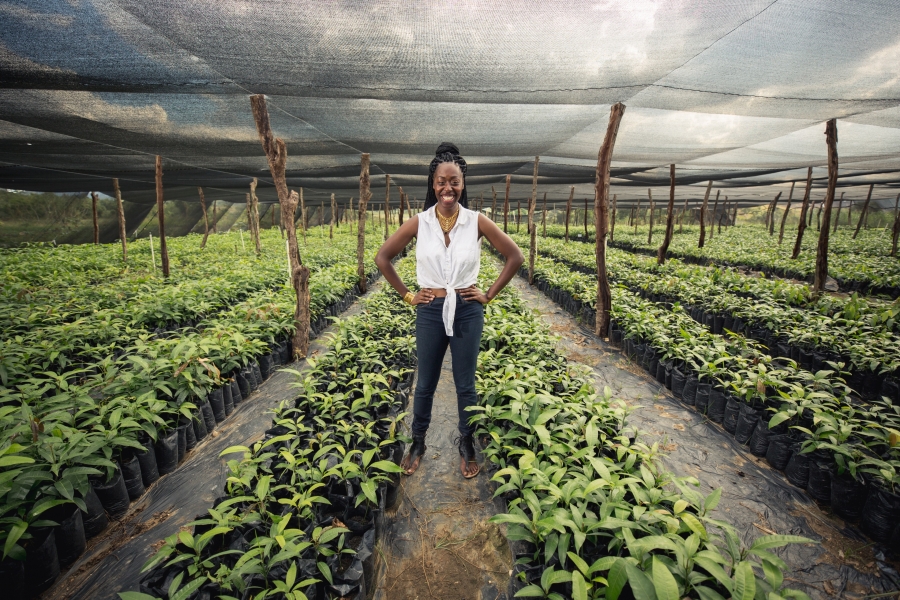 “I don't think being born in the States is what gave me an opportunity. It’s the fact that I’ve been exposed to so many technologies, concepts and ways to go about business that has helped my business grow,” she says. “And I think that’s one of the main skill sets that those coming back to Haiti could give.”

Car Momperousse recently gave a talk for Google’s start-up hub in which she said that one of the best things Haitians in the diaspora can offer is hope — hope in who they are and what they have to offer the homeland. Haitians are often proud that theirs is the only country that was founded by a successful slave rebellion, but it has has long been plagued by corruption and stuck in an economic caste system that benefits the politically connected.

Also: Michael Brun delivers a message from Haiti — one summer block party at a time

Prominent activist Marleine Bastien says there are all sorts of Haitian TPS recipients, including doctors, engineers and PhD students who might be excellent assets to these Haitian start-ups. But she says it is way too soon to think this will change Haiti’s entire outlook. Her organization, Haitian Women of Miami (FANM), has spent 27 years advocating for better integration of Haitians into US health, education, finance and political institutions. They advocated for the TPS status that was granted during the Obama administration in 2010.

“These projects are not to be discouraged. They’re to be encouraged, but they cannot be seen as a solution for a country that has not been able to plan a development strategy for the entire country,” Bastien says, adding that if Haitian TPS recipients are forced to go, some could certainly be absorbed by this burgeoning entrepreneurial market. But she wonders how many of them that market can realistically absorb. “We’re talking about 58,000 with their 27,000 US-born children.”

Last year, she and a team from FANM traveled to Haiti to find out whether Haiti was truly ready to accept such a large number of people. She saw that educated Haitians are often seeking work elsewhere, in Chile or by crossing through Mexico to try to get into the US. Their research culminated in a documentary, “Let Haiti Rebuild.”

That question of scale makes Guelmana Rochelin skeptical as well.

In 2014, Rochelin and a colleague from her master’s program at Harvard Business School went to Haiti hoping to start a business that would benefit the local economy. They noticed that across the country, Haitians were lining up on the streets to buy small portions of boxes of corn flakes from road vendors. So she decided to move back to Haiti to launch Mana, the first single-serving corn flakes brand in the country.

Rochelin, who shared her business model at last year’s Haiti Tech Summit, says most Haitians can’t afford to buy a whole box of cereal. However, when they buy small bags from the larger bulk on the street, they run the risk of receiving cereal contaminated with dust, germs and humidity.

Although her business model is still small — she employs just 15 workers at a production facility outside Port-au-Prince — she feels there has been a paradigm shift since the exodus of many aid organizations. And while she too uses social media channels to promote her product, her main goal is to get her product to the street vendors who cater to the poor, not to larger grocery chains that serve the more affluent minority.

“It’s happening over time, but I do feel there’s a change happening in Haiti right now for the better,” Rochelin says. “Every day cannot be a crisis.”

And crisis is exactly what Bastien fears will happen if all 58,000 TPS recipients return home next year.

“It’s not only private businesses. The state of Haiti has to have the structures to absorb these people,” she says. "Haiti’s just not ready.”

But Boucicault hopes this tech-minded start-up industry can help to push the private and public sector into better planning and cooperation.

“It’s allowing people to connect and look into each other’s lives to understand their problems, as well as what’s good with their lives,” says Boucicault. “Haiti will change when we are able to create massive opportunities at the bottom of the pyramid that will help fund the well-being of the population at large. Technology can make that transition.”