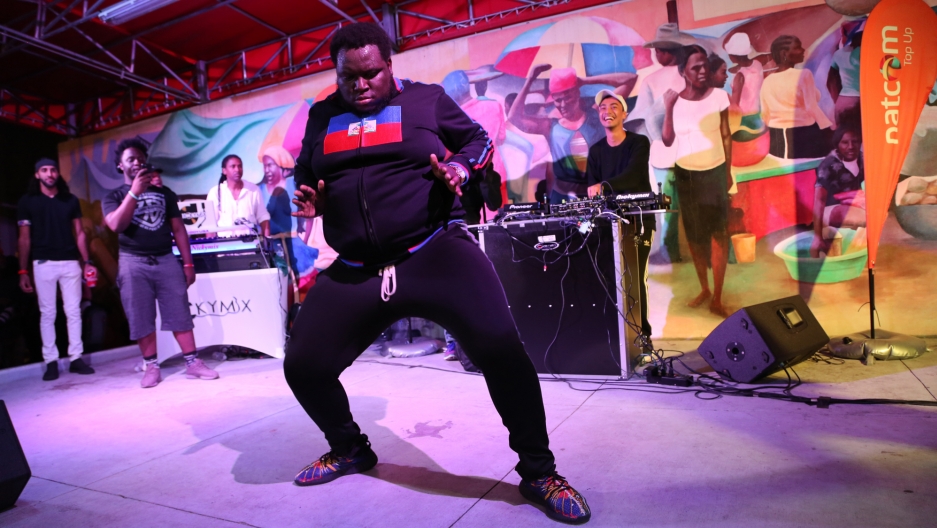 A fan joins DJ Michael Brun on stage at the Bayo Block Party in Little Haiti Cultural Complex, Miami, Flordia, on March 23, 2018. Brun says he’s taking the party on the road to change how people in the US see Haiti.

Michael Brun held his microphone out toward the crowd at Miami’s Little Haiti Cultural Complex as they erupted in cheers and some waved Haitian flags. The venue was packed, the cocktail bar did a roaring trade and the smells of fried pork griot and spiced pickled cabbage, or pikliz, and fried plantains were in the air.

Brun hoped his Bayo Block Party, which he hosted in Little Haiti in March, would bring a sense of unity. From the stage, the New York-based music producer and DJ encouraged people to shout out the Creole word "bayo." That’s the title of his newest track, too. “Bayo” means "to give.”

“It also means give your heart and soul to what you do,” says Brun. “When you put everything into your work, people can tell.”

In a call-and-response, the audience sang along while the mix of hip-hop and Caribbean rhythms pushed the PA system to the brink. It is here in Miami that he decided to take the Bayo Block Party on the road and bring the festive spirit of Port-au-Prince to both Haitians and non-Haitians. 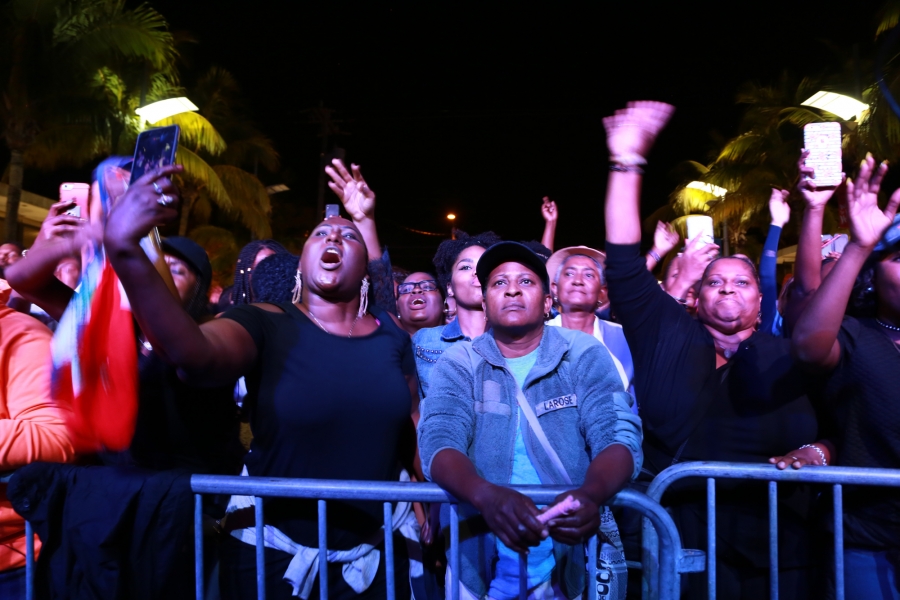 “I want people to know how much of a strength Haitian culture is. Don’t forget the history of the country’s accomplishments,” says Brun.

About 1,000 people were treated to live guests and a finale led by an ensemble of drummers and horns. The Bayo Block Party goes on tour during the month of June.

Brun is attempting to cultivate an alternative narrative to combat misconceptions of Haitians by speaking out publicly any chance he gets. In January, President Donald Trump allegedly included Haiti on a list of “shithole” countries. Earlier, officials told the New York Times, he said that people in Haiti “all have AIDS.”

Brun says he has heard the same things all his life.

“Empowering the youth, empowering the people that are most vulnerable — you have to get strength from within,” Brun says. “These words aren’t going to hurt me. But for a young kid hearing every day that Haiti is this and Haiti is that, that you're basically trash, it is going to have an effect.”

He reminds people about his country’s proud history and resilience. In 1804, Haiti became the first black republic in the Western Hemisphere, after winning independence from French colonial rule and abolishing slavery.

Brun remembers hearing Haitian rhythms when he was a kid on his walks through the streets of Port-au-Prince on the way to visit his grandparents. He grew up in Port-au-Prince where street processions were led by rara. Nothing wakes up a neighborhood like a rara street procession, with its goat-skinned drums, bamboo horns, tin trumpets and exuberant chanting and clapping. A small group can turn into thousands, carrying on for miles, especially during Haiti’s annual carnival held in February.

“It is a really raw, primal sound, but very infectious,” Brun says. “It is fast-paced, but it's also very soulful. I find it is a combo that I haven't really seen in many other countries around the world.” 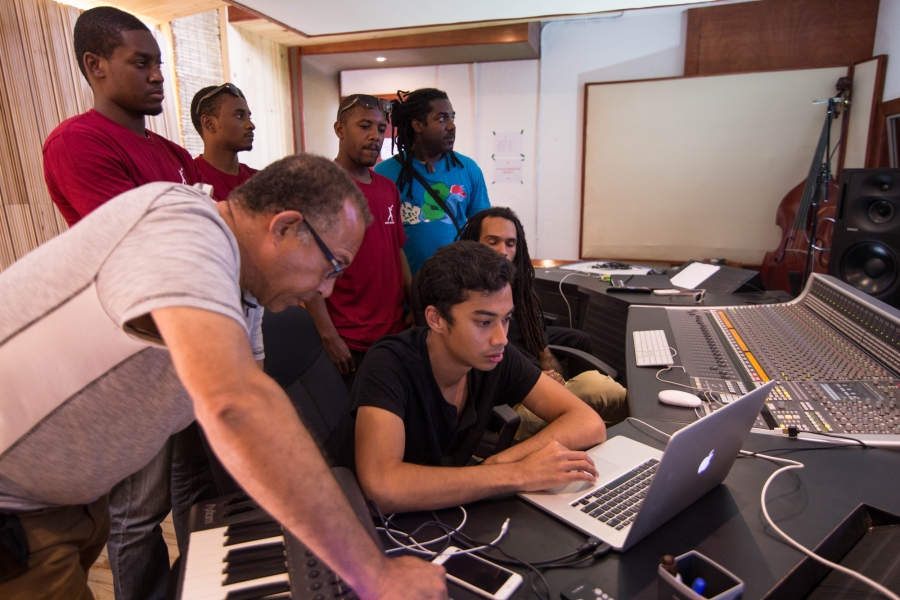 Michael Brun works with students at the Audio Institute in Jacmel, Haiti, which he shared on his website in January 2016. He mentors students there and raises money for scholarships.

Brun, 26, was already playing piano, guitar and violin by the age of six. In the age of music production software, Brun got into playing around with beats as a teenager. After high school, he enrolled in the pre-medicine program at Davidson College in North Carolina and was on track to become a pediatrician. But he decided to take a hiatus from medical school to pursue his other passion: Electronic Dance Music, or EDM. As a young EDM producer and DJ, he quickly became popular and performed at Coachella and Miami’s Ultra Music Festival. In 2013, he released “Gravity,” his debut EP, and in 2014 he founded the Kid Coconut label and released music by Basement Jaxx and Dirty Twist, among others.

“I am going to take the Bayo live show around the US and around the world,” Brun says. “Really giving a snapshot of Haiti from my point of view.”

“It’s a party that I would invite anyone who wanted to hear the hottest Haitian music, and also to hear new upcoming artists,” says Jonathan Perry, better known as J. Perry. He joined Brun onstage in Miami. “For Haitians in the US and in the world, I want them to know that they have a connection with Haiti. Even if they don’t live there, they should know that we appreciate them. We’re all one, we’re united.”

Most popular Haitian music centers around the kompa dance rhythm, but Brun has a wider pallet to paint with. He credits Haitian artists, legendary groups such as the Caribbean Sextet, Boukman Eksperyans and Tabou Combo, with giving him inspiration. He integrates mizik rasin and rap kreyòl into his music as well.

It’s a mix that has paid off. Spanish-language broadcasting company Telemundo recently revealed their anthem for the 2018 FIFA World Cup in Russia. The song, “Positivo,” teams up Colombian reggaeton star J. Balvin singing in Spanish over the beats from Brun’s song “Bayo,” taking Haitians rhythms global.

“Using Haitian music as the backbone of what I'm creating now is also a way to show how far Haitian music can really go,” says Brun. “That’s my journey as a producer, an artist and DJ — to take those sounds in new directions, in new contexts."