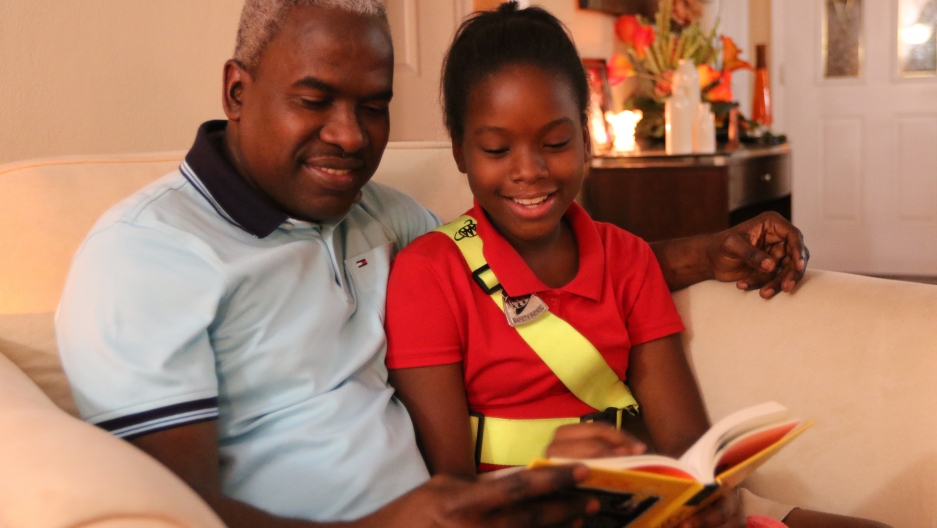 Rony and Ronyde Christina Ponthieux read together in their Miami Gardens home. Ronyde Christina only knows about her parents' homeland of Haiti by what she's read and heard. But President Donald Trump's decision to end temporary protections for Haitian immigrants could soon have her heading to a country she hardly knows.

Ronyde Christina Ponthieux's smile widens as her father, Rony, gives her a nod of approval. The 10-year-old proudly rattles off a list of interesting facts about the United States's unique connection to Haiti but isn't sure if she correctly remembers the number of Haitian soldiers who fought in the Revolutionary War.

His nod is all the confirmation she needs.

History lessons about the relationship between Rony's homeland and the country they call home are common in the Ponthieux household. Today, those lessons are all the more important as the family's future in the US is now uncertain.

The Department of Homeland Security announced Monday that after seven years, as of Jan. 1, it will terminate the Temporary Protected Status Haitian immigrants have had since 2010. TPS is granted to people from countries that have experienced catastrophes, such as armed conflict or a natural disaster. President Barack Obama granted TPS to Haiti after 2010's devastating earthquake killed more than 200,000 people. Monday's announcement means that, after an 18-month grace period, Haitian TPS recipients will have to leave the US by July 22, 2019, most likely returning to a country many have not been to in years, some even decades.

Rony is among the 60,000 Haitian immigrants living in the US with Temporary Protected Status. He and his wife came to the US in 1999 and unsuccessfully sought political asylum before earning temporary visitor visas. But Haiti's TPS declaration in 2010 allowed the couple and thousands of other Haitian immigrants to stay and work in the US while sending remittances home. Rony is now a registered nurse at Jackson Memorial Hospital in Miami while his wife finishes nursing school. Their two children, Ronyde Christina and 17-year-old Christopher, were born in the US and are citizens.

"TPS has allowed me to go to work, to get a driver's license and to take care of my family," he says. "And as a nurse, I am giving back to my community by saving lives. I feel as part of America as everyone else."

Gathered in their Miami Gardens home less than an hour before the DHS announcement, Rony and Ronyde Christina went over their notes. While Rony was cautiously optimistic, the pressure had already taken a toll on him.

"Two months ago, I was sick because I was so anxious," he says. "I was really weak and my blood pressure was up. I had to go to the emergency room and when I was talking to the doctor about my condition, he said that I am too stressed and that could put my life in danger."

Before, TPS extensions were almost routine. Every 18 months, the Obama administration would extend protections for Haitian immigrants without much lobbying or advocacy. But Marleine Bastien, executive director of Haitian Women of Miami, says that all changed following the election of President Donald Trump.

He specifically targeted Haitian American voters in his campaign, frequently criticizing former Secretary of State Hillary Clinton's role in Haitian earthquake relief efforts through the controversial Clinton Foundation. He also paid a rare visit to Miami's Little Haiti neighborhood, telling a gathering of Haitian Americans that he wanted to be their "champion."

"The administration's efforts, it seems, has been to criminalize immigrants," she says. "They made it known that they wanted to terminate TPS."

Rony remained hopeful until a forwarded press release confirmed what the Pontheiux family had been fearing: the end of TPS. Optimism turned to frustration and fear, but the administration's decision didn't come as much surprise.

"Now, we see the real face of Donald Trump because he's not doing what he said when he [talked] about being our champion," he said. "We just want to work, provide for our families and give back to our communities, but we're being treated like criminals because he's anti-immigrant. It's a big hit for us."

Complicating things is the more than 18,000 American-born children of Haiti TPS recipients. Ronyde Christina recently created a video message to President Trump, explaining the contribution Haitian immigrants make toward education and the economy. In her video, she mentioned an Immigrant Legal Resource Center estimate that Haitian TPS recipients losing their work authorization could result in an almost $7 billion reduction in Social Security and Medicare contributions over a decade. Ronyde Christina also pleaded for the president to protect families like hers by allowing her parents to stay. She now fears her family will be split up.

"My father would be deported, and I would be very sad because who's going to take care of me," she asks. "A lot of kids have never been to Haiti before or wherever their parents are from. [The US] is all I know."

The Pontheiux family and thousands of other Haitian immigrants now face the reality that their time in the US is limited. For many TPS recipients, their entire lives are in the US; going back to Haiti would cost them everything. Rony is disappointed but remains hopeful that Congress will pass legislation that would permanently resolve the status of more than 300,000 TPS recipients from Asia, Africa, Latin America and Haiti. He says for immigrants like him who fled violence and extreme poverty, his life could depend on it.

But he says the most successful advocacy has been his conversations with members of his community and the patients he helps. He says he's slowly demonstrating how Haitian TPS holders, as well as those from Nicaragua, El Salvador, Honduras and the rest of the world, are instrumental in helping their communities survive.

"When I explain to them what TPS is and what it means for me, they always respond, 'Oh no, Rony. You're my favorite nurse. I don't want you to leave,' or "We have to do something,"" he says. "Now, the responsibility is on us to make sure more people like those I help know that they can do something. And it starts with a phone call to their representatives."