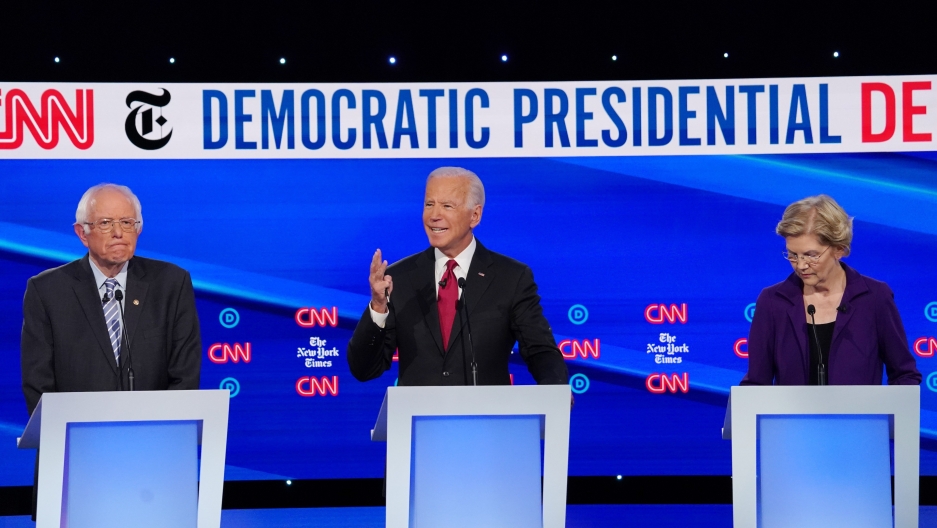 After President Donald Trump pulled US troops out of northern Syria, some captured ISIS fighters escaped, leading to a bipartisan outcry.

At the Oct. 15 Democratic presidential debate, candidates said Trump had increased the danger to the US from ISIS.

ISIS is “going to come here,” former Vice President Joe Biden said. “They are going to, in fact, going to damage the United States of America.”

Related: Turkey agrees with US to pause Syria assault while Kurds withdraw

He made the threat sound immediate. Some counterterrorism experts think Biden is right — that ISIS fighters could easily take a plane to the US and stage an attack at any time. Others say he was overstating the threat.

“There's no suggestion that they have the ability to attack in the United States.”

“There's no suggestion that they have the ability to attack in the United States,” said Bruce Hoffman, a Georgetown University professor who focuses on counterterrorism and homeland security at the Council on Foreign Relations.

Hoffman said presidential candidates should be careful about how they talk about risks because people could panic, and that’s what terrorists want. Right now, he said, the more immediate threat from ISIS is to Europe. That’s what Trump said when he was asked about foreign ISIS fighters escaping from custody in Syria.

“Well, they are going to be escaping to Europe, that's where they want to go. They want to go back to their homes,” he said. “But Europe didn't want them for months. We could’ve given it to them. They could have had trials, they could have done whatever they wanted, but as usual, it's not reciprocal. You know my favorite word, reciprocal. That’s all I want.”

Trump framed it as Europe’s fault for not dealing earlier with the ISIS members in custody. But many members of Trump’s own party still blame him, and have condemned his actions in Syria as endangering the US. And Hoffman said Biden and others are right that, long term, the escaped ISIS fighters could recruit and build networks on the ground and online, and could plan attacks inside the US.

He said the US will have to learn to multitask — because it’s also facing increasing domestic terrorist acts like mass shootings.

“This is what I would argue makes the current situation so much more challenging. We have now very serious domestic threats, and unfortunately, the foreign ones that we've been grappling with for nearly two decades now haven't gone away, either.”

“This is what I would argue makes the current situation so much more challenging,” Hoffman said. “We have now very serious domestic threats, and unfortunately, the foreign ones that we've been grappling with for nearly two decades now haven't gone away, either.”

And domestic counterterrorism officials probably weren’t expecting the situation to change so rapidly, said Adnan Kifayat. He worked on homeland security and counterterrorism in the State Department and White House for 16 years under both Democratic and Republican administrations.

“I certainly don't think that this was something that Homeland Security officials had counted on,” he said.

Kifayat pointed to the counterterrorism strategy released just last month by the US Department of Homeland Security. It talks about increasing domestic threats from far-right and white supremacist groups, and suggests the threat from ISIS inside the US is in check.

“And I don't think that at the time that strategy was written … US officials were counting on the fact that Turkey would roll into Syria and that a lot of these camps and these prisons would be overrun or at least abandoned,” Kifayat said. “So, yeah, that is a new factor that hasn't been taken into account. And it would lead me to think that the government probably is not prepared.”

The American public isn’t prepared either, said Farah Pandith, a counterterrorism expert who served in the Obama administration and wrote the book “How We Win,” about defeating extremist threats. She said Americans are deeply divided, and that leaves us more vulnerable. Pandith said ISIS wouldn’t have to stage a big attack in order to have a devastating impact.

“They simply need to set off a series of violent attacks in ways that will fundamentally send fear through through America. It will unleash a whole series of conversations with Americans themselves who are asking questions about our identity, who we are, what we stand for.”

“They simply need to set off a series of violent attacks in ways that will fundamentally send fear through through America,” she said. “It will unleash a whole series of conversations with Americans themselves who are asking questions about our identity, who we are, what we stand for.”

Pandith said what leaders should really be focusing on is finding ways to knit the American people back together.

“What the candidates should be talking about is the real need for a policy around stopping the spread of the appeal of the ideology so that groups like this cannot build new armies,” she said. “They are feeding off the cultural change that's happened in America, which is the surge in ‘us versus them’ and hate that is taking over different kinds of ideology.”

The US needs to confront its own divisions, Pandith said, because kids who grow up in a climate of hate are more susceptible to extremist philosophies, whatever they may be.