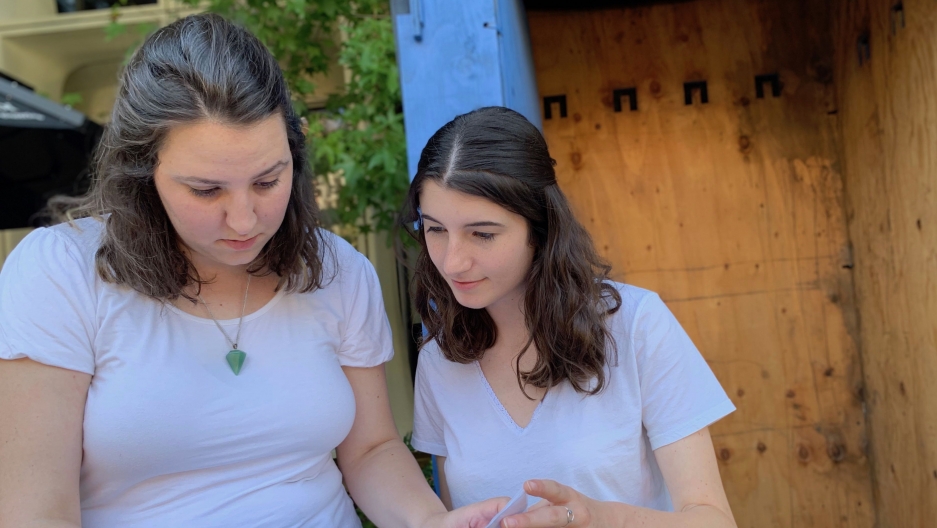 Erna Redzepagic (left) and Siena Applebaum stand by their portable shower on the University of Southern California campus in late August.

Omer Azizi knows what it’s like to be stuck in a squalid tent with only a United Nations-issued ID tag confirming his existence. He fled Afghanistan’s Taliban tucked in his mother’s arms, and spent his childhood in various Pakistani refugee camps. Over the years, he watched his parents fight the odds to get the family out of refugee camps.

They finally made it to the United States in 2014, and today, Azizi is a recent graduate of the University of Southern California. But he hasn’t forgotten about his parents’ struggle and what other refugees are still going through. In fact, he spent much of the past year developing an app that he calls Safar, meaning “journey” in both Farsi and Arabic, to solve the information gap that exists for refugees worldwide, and pitching it to potential supporters. These days, a smartphone, something his parents never had, is a necessity for survival in a refugee camp.

Safar, which Azizi plans to launch this month, came out of an assignment in a unique class he took last year from the university’s engineering school, Innovation in Engineering Design for Global Challenges. Azizi majored in business, but the pilot class drew students from seven different schools across the university.

“I am a refugee; I grew up as a refugee in camps, and when I saw this class, I was like, ‘This is made for me,’” Azizi said.

When the refugee crisis in Europe began, Burcin Becerik-Gerber, a professor of civil and environmental engineering at the school, found herself pondering some big questions — like, how do you improve life for people who live in tents or makeshift shelters, or who are homeless?

Becerik-Gerber and her colleagues were inspired to create the course to tackle those dilemmas. She knew her students would need to see up-close the realities and hardships refugees face.

“You have to be there to build empathy, to be able to be in their shoes even for a week or two weeks,” Becerik-Gerber said.

It’s a new way of thinking about engineering and design — putting concepts like empathy and failure front and center. The class involves talking directly with the people affected, for whom solutions are being created. Students build and test prototypes and seek practical feedback.

“I don’t want to create solutions that are good on paper, but don’t work,” Becerik-Gerber said. So, students make two visits to refugee camps in Lesvos, Greece, over the course of the year.

Becerik-Gerber wants them to realize there are big expectations, and in her welcome spiel during the first class of the year, she told them bluntly: “It is going to be [a] very difficult two semesters.”

Students form teams and collaborate with global partners they’ve been assigned to work with. “So, your team is not just the five of you, you have partners halfway around the world that you have to work with, and they are 8 to 10 hours ahead of you.”

The professors learned many lessons from last year’s inaugural class.

"There are so many questions we cannot answer, even though we went there [to the Greek refugee camps] twice," Becerik-Gerber said. "What materials to use in Greece? How to manufacture something? What would be the most cost efficient?”

This year, they're partnering with the University of the Aegean, which pairs a local student with each team to help with research in Greece. "We're talking about multicultural, multinational, multidisciplinary, multi time zone collaborations," Becerik-Gerber said.

Becerik-Gerber teaches the class with Brad Cracchiola, an engineer and designer, Daniel Druhora, documentary filmmaker, and David Gerber, a professor of architecture practice and civil engineering. (Gerber and Becerik-Gerber are married.)

“But at the end of the day, this is about people who desperately need help on the other side of the world and we’re not playing around; it’s for real.”

“You’re going to be doing a lot of presentations and pitches like you’re a start up,” Cracchiola warned the students. “But at the end of the day, this is about people who desperately need help on the other side of the world and we’re not playing around; it’s for real.”

Amini Muhammad, an Afghan refugee in Greece, shared his story with the students over speakerphone. He had worked for the US military in Afghanistan and fled after being threatened.

Listening to refugees is what this course is all about, and the students will soon go to Greece to meet asylum-seekers in person in refugee camps.

After visiting refugee camps on Lesvos last year, students Siena Applebaum and Erna Redzepagic realized many of their ideas wouldn’t pan out on the ground.

They spent days meeting with asylum-seekers in the camps, asking about life there and people’s needs. They were struck by how people weren’t able to shower regularly, and how the lack of hygiene brought on illnesses.

The students also talked to refugees elsewhere, to see if this problem was unique to Lesvos or more widespread.

“We asked our refugee partners who are resettled in Germany and Spain and Greece, ‘Is hygiene a really big issue in the camps?’ And they all confirmed it was one of the worst things there,” Redzepagic said.

They set out to design a portable, low-cost shower.

“One of our first ideas was a pop-up tent,” Applebaum said. “Something with collapsible poles for a frame and a tarp surrounding it.”

It looked somewhat like a camping shower, and they thought it would work well. It was their first failure.

“As we showed this to people we were working with, all of the women came back to us saying, ‘I do not feel safe showering in that.’”

“As we showed this to people we were working with, all of the women came back to us saying, ‘I do not feel safe showering in that,’” Applebaum said.

In the camps, too often women are vulnerable to sexual assaults in showers, which are often made of tarp material. Men have been known to slice through the material while women bathe.

After rethinking the shower’s design, Applebaum and Redzepagic landed on a long, slender wooden box — similar to a portable toilet. They built a prototype with wood panels that fit together like puzzle pieces.

The wood panels are held in place by military strength zip ties. There is no way a knife could slice through, which means their target user — a refugee woman or girl — might actually use what they built. They are now hoping to find a company in Greece to help manufacture the wood panels.

Similarly, Azizi, also an alum from last year’s inaugural class, realized the information needs of refugees when he went to Greece last year with his classmates. It helped that Azizi had firsthand experience in refugee camps — and since he’s fluent in five languages, he could speak to most of the refugees he met.

“I talked to a random refugee who was seemingly very distressed and was walking around, and I asked him, ‘Hey, can I help you,’ and I spoke in Farsi with him and he told me that he has an asylum interview and he was very much concerned if he doesn’t do well in that interview it’s over for him,” Azizi said.

He knows that feeling all too well. “I [asked] him, ‘Do you know there is a legal aid NGO [and it’s] main job is to help with cases?’ And he was like, no,” Azizi said.

Refugees should be able to access information about legal aid agencies, medical service providers and free food in one place, he said. That's where Azizi's app, Safar, comes in. His parents might have benefited from something like that during their years in the Pakistani camps.

Some nongovernmental organizations wanted to be able to use the app to communicate with each other, too. That way, they could avoid replicating services and prevent refugees from falling through the cracks. Azizi also simplified the interface after hearing that people had a hard time navigating the app.

Now, he's shopping his app around to investors. He's also turning down jobs with top engineering firms because he wants to help other refugees.

“I feel that I have the moral responsibility to give back,” said Azizi, who is mentoring students in the USC course this year. “The humanitarian space and the refugee crisis needs refugee leadership.”

Correction: An earlier version of this story misattributed a quote from Brad Cracchiola.

Editor's note: Deepa Fernandes is a Pacific Oaks College reporting fellow, which is funded in part by First 5 LA.