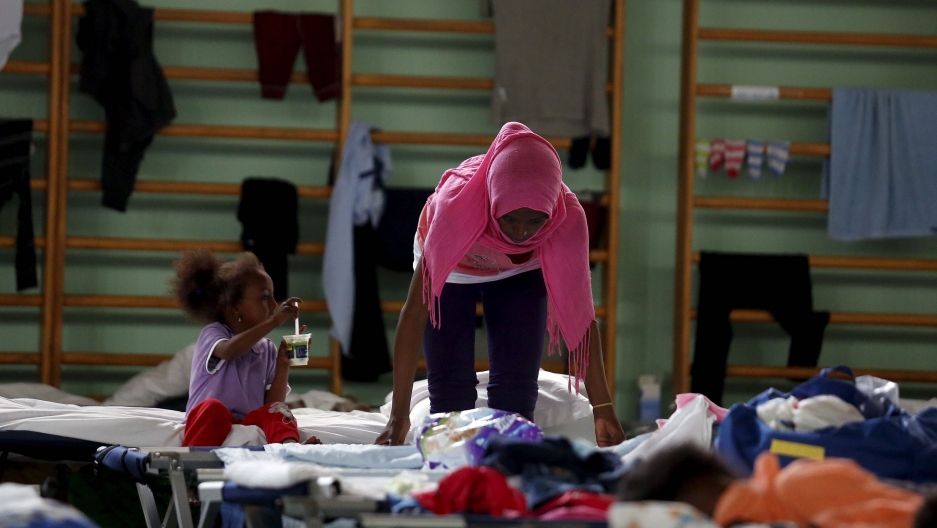 Kadiatou* was 14 when she fled her uncle’s home in Guinea, West Africa. She knew she had to leave when he began making arrangements for her to marry an older man.

Kadiatou, whose parents and younger sister had died, turned to a school friend for help. Her friend gave her a little money, and one day, she packed some belongings and began the long trek across Mali through Mauritania, Algeria and Libya before boarding a boat to Italy.

That was two years ago. Kadiatou, now 16, is among the throngs of unaccompanied, migrant children to arrive in Sicily in recent years. In 2016 alone, a record 26,000 unaccompanied minors came to southern Italy.

Today, the numbers arriving have plummeted. It’s partly due to the fines issued by the Italian government against rescue vessels operating off its shores, but it's mainly the result of deals between the right-wing government and the Libyan coast guard.

Many of the young people coming to Sicily fall through the cracks. Some head north to other parts of Europe hoping for better job opportunities or to reunite with family members. But many remain in Sicily, undocumented.

Ivan Mei, UNICEF’s child protection specialist, says he worries about these children the most, as they are particularly vulnerable to exploitation, sexual abuse and trafficking.

Italy is required to provide accommodation and education to migrants under 18, but once they become adults, things change. Recent legislation introduced by the country’s far-right, Deputy Prime Minister Matteo Salvini, removed humanitarian protection for many young migrants. It means when they turn 18, they could be evicted from government accommodations and end up living on the streets.

Related: After budget cuts, asylum-seekers in Italy forced out of cities

But some people in the region have stepped up to help migrant young people. Like Maria Letizia Barone, who has become a guardian to Kadiatou and another teenager, Marie*, through a program organized by UNICEF.

The idea is to assist migrant children who arrive in Italy alone through the exhaustive legal process, many of whom have other educational needs, as well.

Barone, who has two daughters of her own in their 20s, has become like a surrogate mother to the young migrant women who call her “mama.” Likewise, Kadiatou and Marie “are like my little daughters … but they don’t think they are too little,” she said.

Kadiatou and Marie live in a secondary reception center, a government-funded accommodation for migrant minors, and visit Barone at home several times a week. They talk on the phone a lot, too. Barone says the two young women have become her extended family — both her biological daughters and Kadiatou and Marie all get along well. Recently, they were together for Barone's daughter’s graduation party.

Like any anxious mother, Barone worries about how much she can truly support the two teenagers.

She worries about them “starting a new life ... fighting with the past will be [their] greatest challenge, I think.”

Kadiatou is reluctant to give details of her journey, but Barone says, from what she understands, it was unbearably harrowing at times.

Kadiatou’s plan was to go to school. She picked up basic jobs as she traveled, and wherever she was, she asked for advice about getting into school. But she never succeeded.

Barone says it was in Libya that things took a turn for the worse.

“She arrived [in] Libya. She was imprisoned and raped. She became, for a period, a sex slave. Something like that.”

Barone doesn’t know exactly what happened to Kadiatou because the teenager is slow to reveal details to her. Some months ago, Kadiatou asked Barone if she could see a psychologist to help her cope with her “bad memories.” Barone says she worries about her.

“I think she suffered too much. It’s difficult for her to smile. When she’s by herself, she’s just very sad.”

“I think she suffered too much. It’s difficult for her to smile. When she’s by herself, she’s just very sad.”

Italian authorities have noticed a strong bond between the Kadiatou and Marie, and have endeavored not to separate them.

Marie, who is from the Ivory Coast, West Africa, was only 13 when her mother sent her to live with a friend in Tunisia. Her father, who had worked for the previous government, suddenly disappeared, and her mother struggled to cope. Marie eventually left Tunisia and landed in Libya, where, like Kadiatou, she took a boat journey on her own to Italy. Barone says she is unsure how the girls managed to get on the boats as both say they didn’t pay for the journeys. Barone says she prefers not to ask too much. Now, Marie has other things on her mind.

A few weeks ago, she told Barone she was feeling nauseous a lot. Barone was suspicious, and when Marie complained of breast tenderness, she demanded the young teen do a pregnancy test. Marie told her it wasn’t possible, that she couldn’t be pregnant. They did the test.

Marie asked her what it meant.

Marie cried after hearing the result, but Barone thinks her tears were out of fear of her reaction rather than the reality of the news.

Marie’s boyfriend had told her she wouldn’t get pregnant. Barone says Marie, now 15, is quite innocent and sometimes childlike. Like any mother, Barone met with the boyfriend and asked what he planned to do. He says he will stand by Marie, although Barone doesn’t appear convinced.

Like Marie and Kadiatou, Khaoussou Diassigui, from Senegal, arrived alone in Sicily in 2016. He told no one he was planning to leave home.

Diassigui’s dream was to travel to Europe to study. When Diassigui arrived in Libya and witnessed migrants' living conditions, he wondered why he had ever left Senegal. He rang home for the first time in months. His father was shocked to hear where he was, and his mother begged him to come home. But Diassigui felt he had been through too much to go back.

“I told her, ‘Mom, I’m nearby Europe, now I can’t turn back.’ I said, “I will risk my life. I don’t know if I will enter into Europe, surviving or dying. But I’m not turning back in Africa again.””

“I told her, ‘Mom, I’m nearby Europe, now I can’t turn back.’ I said, “I will risk my life. I don’t know if I will enter into Europe, surviving or dying. But I’m not turning back in Africa again.””

Diassigui’s first impression of Europe was far from the dream he had back home in Senegal. The Palermo reception center was vastly overcrowded and staff struggled to cope with the scores of migrants arriving daily. The centers are intended to be temporary sources of accommodation for a few weeks. Diassigui lived there for over a year.

Despite their traumatic journeys, young unaccompanied migrants like Diassigui, Marie and Kadiatou are the fortunate ones. They have accommodation. All three are going to school. And they have settled into life in Sicily — even with “too much pasta.”

Diassigui is very aware of the changing attitude of the Italian government toward migrants. Although his status is secure, he worries about his friends whose status has not yet been decided. In 2018, together with other Senegalese young migrants and refugees, Diassigui launched Niofar, an organization promoting Wolof culture and language. One day, he says he hopes to become a politician who can affect change.

Kadiatou and Marie, meanwhile, continue with their studies. Kadiatou says she plans to go to college and study languages. Marie thinks she’d like to become a hairdresser.

For their mama, there are new challenges, too.

“I told my family I am becoming a nonna adottiva,” or an “adoptive grandmother,” Barone said.

She knows that once Marie and Kadiatou turn 18, they won’t be under her care anymore. But she is hopeful that they will stay connected in the long run and that the girls will be able to fulfill their dreams.

*The young women's full names aren't being disclosed due to the sensitive nature of their stories.