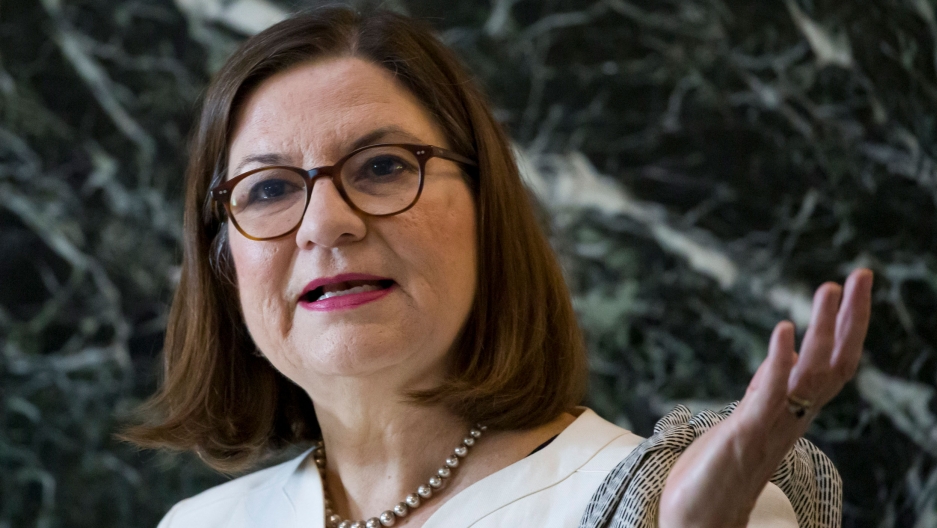 Mexican ambassador to the US Martha Bárcena, speaks during a discussion about the United States-Mexico-Canada Agreement, in Washington, DC, May 2019.

US officials say they're investigating the Saturday shooting rampage in El Paso, Texas, as an act of domestic terrorism and that the suspect will face the death penalty, but federal officials in Mexico are also speaking up.

At least eight of the 22 people murdered at the Walmart in El Paso were Mexican nationals. Mexico's Foreign Ministry called the shooting a “terrorist act against innocent Mexicans,” and the Mexican government is contemplating an extradition of the suspect on terrorism charges. Such a situation is rare and it is uncertain whether the US will oblige. But Mexico City is determined to follow through with an investigation into what happened in El Paso on Saturday.

"We have conveyed to US authorities that we have to work against a discourse of hate and racism."

"The office of the attorney general in Mexico has started an investigation and they have to do it by law," said Martha Bárcena, Mexican ambassador to the US. "We have conveyed to US authorities that we have to work against a discourse of hate and racism. At the same time, the Mexican government has already qualified the incident as terrorism. So that's why we are proceeding with an investigation in Mexico."

The World's Marco Werman spoke with about Mexico's response to the shooting rampage in El Paso.

Marco Werman: Ambassador, you talk about the indignation in Mexico, but the Mexican government's strong response — its shock to these killings — it rings hollow for many Mexicans. You can see this reaction on Facebook and Twitter. I mean, in Juárez alone in July there were more than 130 murders and that was an increase from June with no comment from federal officials in Mexico City. So, how and why can the government react so strongly as the homicide rates rise in Mexico and in Juárez?

Martha Bárcena: I do not deny that there are murders in Mexico but they don't have an intentionality to address or to kill one specific group. The things that differentiate the shooting in El Paso from killings even into Juárez is that that shooting was addressed specifically against a group, which was the Mexican and the Hispanic community. And I think that makes all the difference. And at the same time, another issue that is big for us is the issue of the gun. We have been telling the US and we have asked recently to reestablish a working group to have more control on the arms that are coming from the US into Mexico and that are contributing to the high levels of violence in Mexico.

Ambassador, I understand your point about intentionality and a difference between violence in some of these places in Mexico and what happened in El Paso, but how can Mexico seek to protect its own citizens in the US while it's partnering with the Trump administration on policies that actually put migrants in harm's way?

We need to work with the current government of the United States and we have to work very hard, even in the most difficult times, to have a respectful relationship. In the case of migrants, we have had long conversations telling them that there are some cities in Mexico in which it would be very difficult to accept the migrants for a long time because we don't have the conditions to have them for a long time. We have been asking them to speed up the process of adjudication of asylum claims. But I don't think we can relate the shooting in El Paso with what we are doing or not doing on the case of the migrants.

Ambassador, the bond between Mexico and the US is so deep, and yet the border situation, as you know, the actual physical connective tissue between the two nations — it's under such stress. How frustrating is that for you?

For me, personally, it's very frustrating. You know, El Paso was considered one of the safest cities in the US. But the border is an area of great opportunity and of communities that are used to liv[ing] together and to interact together. And this is something that we have to underline.