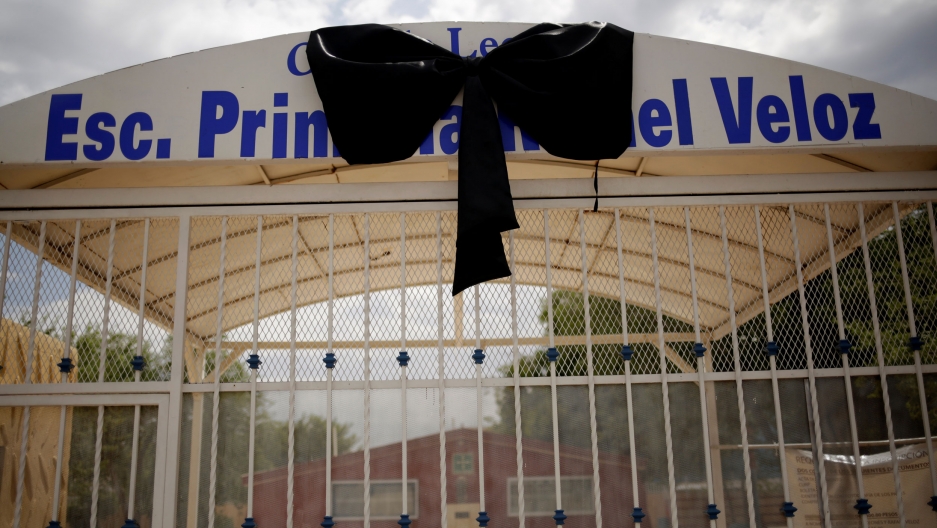 A black ribbon, placed in memory of teacher Elsa Mendoza, who died in the El Paso, Texas, Walmart shooting, is pictured outside the Rafael Veloz elementary school in Ciudad Juárez, Mexico, Aug. 6, 2019.

El Paso, a heavily Hispanic Texas border city, is reeling after the Saturday shooting rampage in a crowded Walmart that left 22 people dead. Survivors are now confronting the fallout of the racist attack and beginning the hard work of rebuilding their community.

On Monday, a crowd of several hundred classmates, teachers and relatives filled a high school football stadium in the El Paso suburb of Horizon for a memorial service honoring the youngest of the 22 people slain.

Host Marco Werman reflects on remembrance and coping strategies with Fernando Garcia, founding director of The Border Network for Human Rights (BNHR), a nonprofit that supports immigrant border communities and has organized a nationwide vigil that will take place Wednesday. They also discuss what Garcia calls "the intersection of two evils" — guns and white supremacy — ahead of Trump's announced visit to El Paso tomorrow.

Marco Werman: What are the questions you're asking that leads to solutions that address what appears to be a white supremacist intent on killing brown people?

Fernando Garcia: I think what we are reflecting on is [that] there is an intersection of two evils — guns and white supremacy. And whatever solution we have, it has to actually deal with that immediately. I mean we cannot any longer continue as if nothing happens here at the border.

Meanwhile, the pain from the Walmart shooting is still very alive. What kinds of services and supports are people seeking out?

You know, there have been several community reactions and actions. Obviously, people are flooding blood banks; people are doing services and vigils. But let me tell you one thing, I think it is important: That day, that Saturday, that afternoon, when I was getting ready and preparing for a press conference the next day — because we wanted to actually send our solidarity out to our families, but also talk about the reasons why this happened — I was in my home, and my 14-year-old came to me out of the blue ... and he looked at me, very sad, and he told me that he was afraid. This is a US citizen who lives with a human rights organizer telling his father that he was afraid!

What did you say to him? I mean, do you even feel equipped to answer that?

I just couldn't say anything honestly. I just hugged and embraced him and kissed him. But I think my reflection at that moment, right after this, is that, if this is the case with my son, [then] what is the case with many families, especially immigrant families in the region? So, I started asking around, and what I found is that people were in shock but also ... afraid. I mean they were afraid before, especially immigrant families that were subjected to these harsh enforcement actions by this president. But now there is a new level of fear that, like the hate and the racist rhetoric, can kill people.

There is a fear prior of immigration enforcement and now a fear of people with guns. Are you finding people who are actually changing their daily routines?

You know that day — the day of the event and the day after the event — we received some calls, especially through social media, of people who were impacted by the shooting there at the Walmart. They were concerned about the presence of border patrol near hospitals and clinics. So that community is afraid. I mean, I need to tell you that at the same time, we are pushing back and say, we're not going to become just a victim. We need to fight the reasons that cause these killings.

Your group, The Border Network for Human Rights, is helping to organize a nationwide vigil tomorrow. It's also a call to action against white supremacy. The hashtag is #ElPasoFirme. So as families and communities mourn the loss of loved ones, do you have any concerns about speaking out about white supremacy?

No, not at all, not at all. I had concerns that the president was coming down to El Paso to say that this was a mental health issue. This attack was against what El Paso represented. I mean, we had welcomed immigrants and refugees, we opened our arms, our city, our homes. So I think that was the intention to silence El Paso and to silence our community. [B]ut ... a strong response to the visit is going to be peaceful. Let me tell you that. [A]t the same time we're going to show El Paso resilience and how proud we are of what we are.