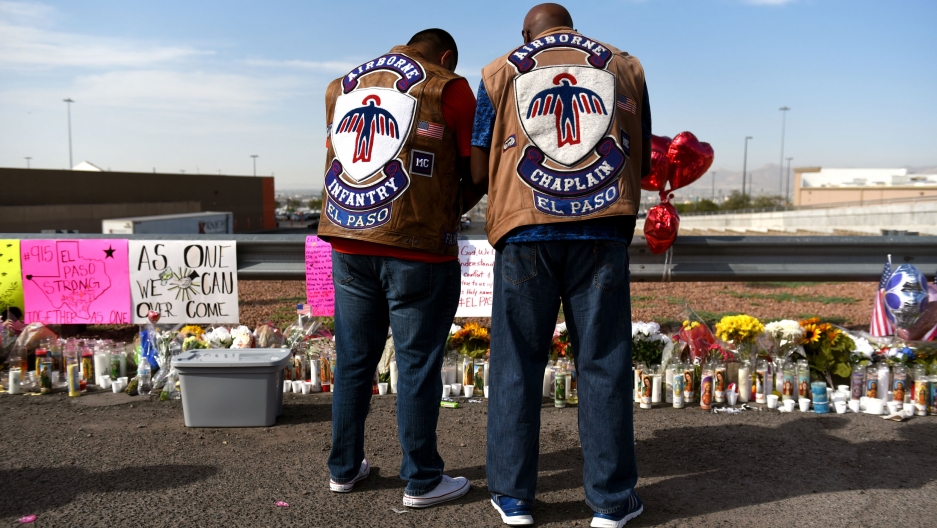 Members of motorcycle group pay their respects at a growing memorial site two days after a mass shooting at a Walmart store in El Paso, Texas, on Aug. 5, 2019.

President Donald Trump on Monday proposed tighter monitoring of the internet, mental health reform and wider use of the death penalty in response to mass shootings over the weekend that killed 31 people in Texas and Ohio.

A 21-year-old white man has been charged with capital murder in Saturday's shooting spree. Police in El Paso cited a racist, anti-immigrant manifesto posted online shortly before the shooting, which they attributed to the suspect, Patrick Crusius.

The four-page statement was posted on 8chan, an online message board often used by extremists, and believed to have been authored by the suspect. It called the Walmart attack "a response to the Hispanic invasion of Texas." It also expressed for support for the gunman who killed 51 people at two mosques in Christchurch, New Zealand, in March.

Related: Identicide: How demographic shifts can rip a country apart

The statement reflects a worldview shared by other young white supremacist extremists from Norway to New Zealand, who believe their national identity is under threat from changing demographics.

The World's Marco Werman spoke to professor Monica Duffy Toft, an expert on the roots of civil conflict and civil war at The Fletcher School at Tufts University.

Toft wrote an essay earlier this year that asked, "What happens to a country when its core national identity — its preferred image of itself in terms of race or religion — doesn’t match its demographic reality?"

Marco Werman: What happens when a country's core national identity no longer matches its demographic reality?

Monica Duffy Toft: Well, what it does is [cause] at least quite a bit of anxiety and trepidation among those, some segment of those, who were formerly in the majority. They feel as if they're going to lose political and/or economic power and so they sort of, you know, react to what they feel as if dramatic changes within their country and what they think should be the makeup of that country. They have an ideal in their head what they think the country is supposed to look like — in the case of the United States its largely white, Christian — and I would go so far as to say Protestant Christian —and also with males in charge. And so, we've seen a lot of dramatic changes in the country and only now are we seeing it reflected much more publicly in the open and I would say politically as well.

So you would argue that white Christian is America's core national identity? What about a nation of values?

I wouldn't make that argument. What I would say is there's some segment of the population that believes that that is what the core of the United States' narrative, its history, is and has been, forgetting that, of course, the United States has largely been a melting pot since its inception, since the founding of the country.

So you also can put this in context because you've studied over 100 civil conflicts around the globe. What is the worst example of this pattern that you've seen?

The worst example is probably former Yugoslavia in the early '90s, where you saw a shift, particularly in Kosovo, that led to Serbs within Kosovo feeling as if the Kosovar Albanians had taken over what they saw as their homeland territory and leading to, first of all, a civil war, and then, of course, to the breakup of former Yugoslavia.

But we also saw similar dynamics in the Soviet Union. I would go so far as to say you can tell a pretty basic demographic historical narrative story for the breakup of the Soviet Union, which is that the Slavic population — particularly the Russian Slavic population — was becoming a minority. And so there was a sense that, "OK, we can let the non-Slav parts of the country go, but we want to hang on to this core." And so, today, now, Russia is upwards of 82% ethnically Russian but in the late 1970s, it was going to be a minority as other parts of the Union were growing, having higher birthrates.

Another paradigmatic case is Lebanon and the breakup of Lebanon, where you had different parts of the population sort of cooking the books, actually not giving proper census accounts in order to maintain control of the political system. And if you control the political system, to a large extent, you can control a lot of the economics and markets as well.

In the case of Russia, you mentioned that today it's 82% ethnic Russian. What does that tell us about this kind of pushback?

What it tells you is that if it's allowed to sort of fester, that it can lead to large-scale violence — it can, it doesn't have to — or it can lead to civil war. What I've been studying (I'm finishing up a book on this is) is looking at these sorts of dynamics about how, in the political arena once this becomes public and gets vocalized like this, what are the dampers? What are the institutional mechanisms for squashing it?

I'm a bit nervous right now in the United States because at the highest levels you are seeing this sort of antipathy. There's a hostile sentiment against non-whites in the country and they're being labeled criminals and you're using language about them being insects and invading the country. [It] can lead to large-scale violence and already it's a slow-moving revolution that's happening and the question is, is it going to be violent or not?

Are you going to see the majority of whites and the majority of the country — by the way, let's not even talk about race — that actually supports immigration and can actually get their voice heard and get it put into the political arena so that we can have some immigration reform and that we can move away from these levels of hostility? ... President Trump's [statement] today — that was his largest denunciation of white nativism and this sort of extremist rhetoric and action. I don't think it's too late to dampen it, but we need this to be the story from now on in order to dampen the level of violence because now at least tens, if not hundreds of people are dying as a result of these kinds of sentiments.

This interview was condensed and edited for clarity. Reuters contributed to this report.