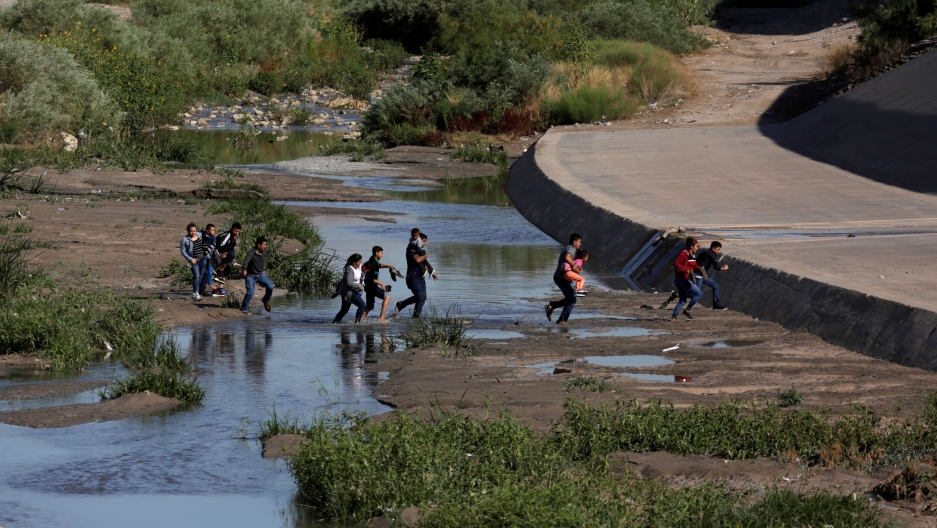 Migrants cross the Río Bravo to enter illegally into the United States, to turn themselves in to request asylum, as seen from Ciudad Juárez, Mexico, July 12, 2019.

The Trump administration on Monday moved to bar almost all immigrants from applying for asylum at the country's southern border, requiring them to first pursue their claims in a third country they traveled through before seeking safe haven in the United States.

The Department of Homeland Security, in a statement issued with the Department of Justice, said the interim rule would set a "new bar" for immigrants "by placing further restrictions or limitations on eligibility for aliens who seek asylum in the United States."

The rule would make it all but impossible for applicants seeking protection from persecution unless they first apply for asylum in a "third country," such as Mexico or Guatemala, through which they traveled en route to the United States.

The proposed changes, set to become official on Tuesday, represent the latest effort by the Trump administration to crack down on immigration, the signature issue that helped propel Trump to the White House in the 2016 election and one already figuring prominently in the 2020 campaign.

The American Civil Liberties Union called the new rule "patently unlawful" and vowed to sue. Sarah Pierce, an attorney and policy analyst with the Migration Policy Institute, speaks with The World’s host Marco Werman about the rule's legal implications.

Marco Werman: Let's start right at the beginning. What is an asylum-seeker — what's the definition?

Sarah Pierce: An asylum seeker is someone who is outside of his or her country of nationality [and] they're unable or unwilling to return because they have a fear of persecution in their home country.

So, tell us what this new rule is changing exactly.

But aren't there international treaties and protocols that define the rights of asylum-seekers, which the US is signatory to. I mean, can the US simply change these rules on a whim?

So, yes, the United States has to answer to these international treaties and obligations with regards to our asylum policy. But the administration is hoping that a provision that we put into our laws called "withholding of removal" can really save them here. So, when an individual applies for asylum at the southern border and they're subject to this new regulation, they'll still be permitted to apply for something called withholding of removal, which is really a barebones benefit. It effectively says: "For right now, we won't deport you. We'll also give you temporary work authorization," but it's a really high bar to qualify for withholding of removal. It's much more difficult to qualify for that than it was to apply for asylum.

Don't Mexico and Guatemala have a say on who gets sent back to their countries from the United States?

They do. That's true. They could try to slow-walk any of these deportations if they wanted to. I think they would face a lot of pressure from the United States if they did that.

I mean, technically, if people are fleeing violence in say, El Salvador, if they are only seeking safety surely they could claim asylum in any country they enter like Mexico, right?

I mean that would be the first country somebody from Guatemala, say, steps in.

Any of these international treaties that the US is signatory to — what action could they take if Trump creates his rule?

Right. I mean, it's supposed to be taking effect tomorrow, as soon as it's published. Do you think it will take effect?

Yeah, I do think it's likely it'll take effect.

Even with pushback from courts?

I do expect advocates to file right away. So, the question is whether or not it will be enjoined right away. The closest case we have to compare this to is the asylum ban when the administration tried to make it impossible for anyone to apply for asylum if they crossed the southern border illegally. That was quickly enjoined after, I think, like 10 days by federal courts [taken on by judges]. But I think there was a much stronger legal argument for advocates in that case than there is in this one. In that case, it was clearly counter to federal law and the original intent of Congress. In this one, I don't think they can point to a federal law that clearly counters it quite as easily. So, I think they're going to have a little bit more of an uphill battle.

This interview has been lightly condensed and edited for clarity. Reuters contributed to this report.