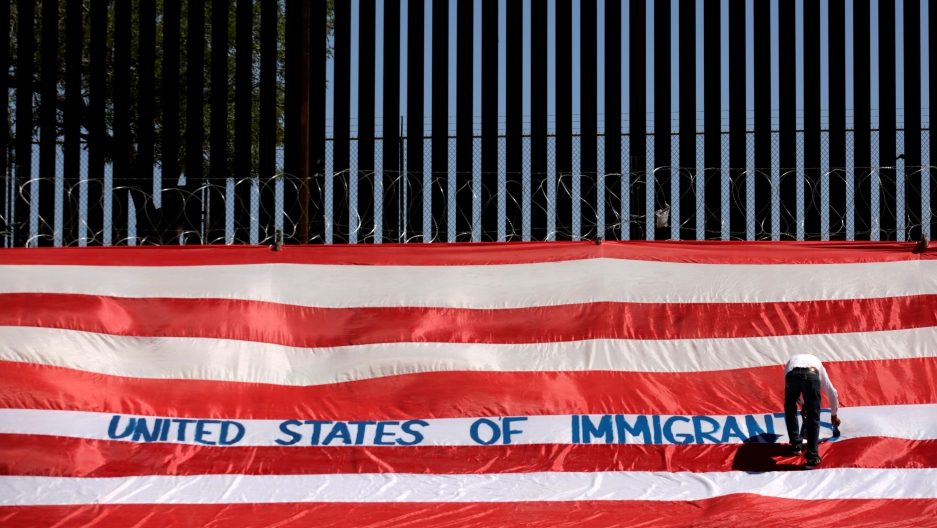 Roberto Marquez, known as Roberz, writes on a large US flag as part of a protest called "United States of Immigrants," aimed to demand respect for the migrants, near a border wall in El Paso, Texas, as pictured from Ciudad Juárez, Mexico, June 6, 2019.

Over the past three months, the number of Central Americans arriving at the US-Mexico border has jumped exponentially, and total border crossings have reached levels last seen in 2006.

It’s not that these families prefer to cross the Rio Grande or scale the border wall. Instead, our research shows that at least part of this pattern can be explained by a US policy that has left thousands of individuals waiting to request asylum in Mexican border cities since the summer of 2018.

In May 2018, US Customs and Border Protection officials began a practice known as "metering" across the southern border.

At the same time that the metering process began, these US officials started coordinating with Mexican officials to alert them of their capacity and how many asylum-seekers the ports could accept per day.

As metering spread across the border, the number of asylum-seekers in Mexican border cities increased. Yet it wasn’t clear exactly how many people were left waiting. When we started our research in November, no one had reported the numbers across the entire border or how the waitlists worked.

In December, we published a report with four colleagues that documented the spread of metering along the US-Mexico border and responses within Mexican border cities.

Soon after the report was published, new migration dynamics began to shift what metering looked like in these border cities, so we published an update in February and another in May.

Related: As hundreds more asylum-seekers are sent back to Mexico, rights groups say US policy is illegal

These reports draw on dozens of interviews with Mexican government officials and civil society representatives, as well as in-person observations at ports of entry.

Our reports show that the number of people waiting in border cities to seek asylum at ports of entry has increased — from approximately 6,000 in November 2018, when the Honduran migrant caravan arrived in Tijuana, Baja California, to 19,000 in May 2019.

The increasing numbers have resulted in longer wait times along the entire border. In November 2018, most asylum-seekers waited a few days or weeks for their turn on the list to request asylum at the port of entry. Now, asylum-seekers wait one to two months in most cities for the chance to ask for asylum at a port of entry. In Ciudad Juárez, Chihuahua and San Luis Río Colorado, Sonora, they wait over four months.

A growing number of Mexican border cities have developed waitlists to organize the lines of asylum-seekers, coordinating with Customs and Border Protection officials on how many are accepted per day.

While all major border cities have waitlists, smaller cities now also have started their own waitlists. These lists are managed by a range of administrators, including Mexico’s National Migration Institute, state and municipal governments, civil society organizations and asylum-seekers themselves.

The list logistics also vary. They may include writing name and nationality in a notebook; sending personal contact information through social media, such as a private Facebook group; or sending a Whatsapp note to the list officiator.

This lack of standardization is not only confusing for asylum-seekers, but can create nontransparent processes that foster corruption. For example, we and others have heard allegations of list administrators charging bribes to add asylum-seekers to their list.

The increase in the number asylum-seekers and longer wait times has put a stress on shelters in Mexican border cities, which all reported to us that they were over capacity.

As a result, asylum-seekers rent hotel rooms and apartments or sleep on the streets. This increases their risks of being preyed upon by organized criminals or other opportunistic actors.

The nonstandard waiting list process, long wait times and security threats in Mexican border cities have pushed some individuals to cross without authorization between US ports of entry to request asylum.

An October 2018 Department of Homeland Security report documented this trend, noting that metering “may have led asylum-seekers at ports of entry to attempt illegal border crossings” after being turned away at ports of entry. It has also created confusion with the waitlists in Mexican border cities, as some asylum-seekers do not show up for their turns.

We believe the challenges are likely to only worsen in the coming months. According to a June 7 agreement with Mexico, US authorities have promised to begin sending back more people to Mexican border cities under the Migrant Protection Protocols, a program that began in January to send asylum-seekers to Mexico for the duration of their U.S asylum case proceedings.

With larger numbers of people waiting to seek asylum and others waiting during their asylum cases, Mexican border communities will likely continue to feel the strain.