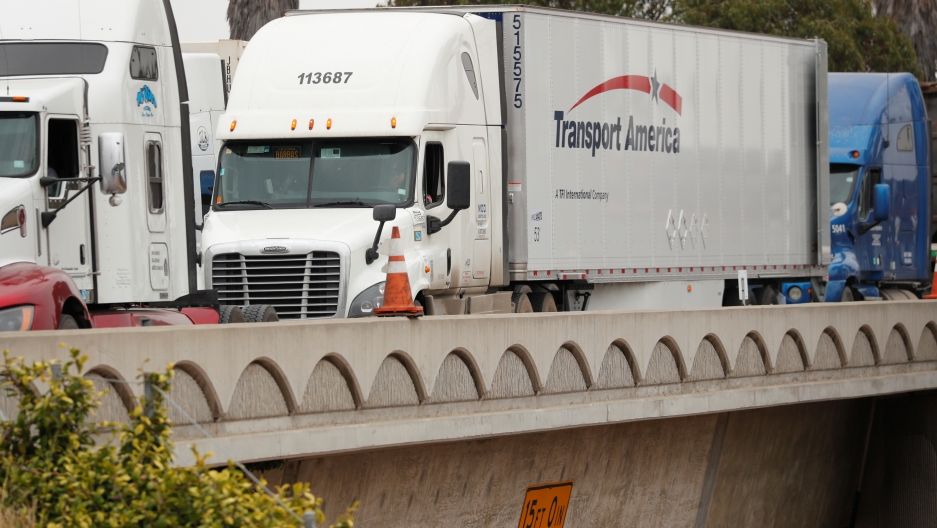 Transport trucks from Mexico cross into the United States at the Otay Mesa border crossing in San Diego, California.

On Thursday, President Donald Trump made the unexpected announcement that on June 10, he would raise tariffs by 5% on Mexico for all goods entering the country until migrants stopped illegally crossing the border into the United States. This decision came to the surprise of many, who fear that this move could increase costs on products from cars to vegetables. Furthermore, this could threaten the renegotiation of the North American Free Trade Agreement, also known as NAFTA, which the US, Canada and Mexico had pursued after Donald Trump's election.

Carol Hills spoke to the former Mexican ambassador to the US, Arturo Sarukhan, to give Mexico's perspective on how this move could further deteriorate the relationship between the two countries.

Related: Mexican officials aren’t so worried about Trump's vows to bring jobs back to the US

Carol Hills: How do you think Mexico should respond to this tariff threat?

Arturo Sarukhan: First of all, I think we shouldn't be seeking to appease President Trump. Trump is someone who you give your hand out to and he will forget about the arm and grab the whole body. I think some red lines need to be placed by the Mexican government. I think Mexico needs to remind President Trump what Mexico has been doing at a very high domestic and social cost — stopping and repatriating Central American migrants moving through Mexico. At the end, they should let US customers and US businesses bear the brunt of President Trump's new tariffs. When you've got 25 states in the US that have Mexico as their No. 1 trading partner, you can imagine a number of governors, members of Congress, [who] will be calling the White House and saying that this is crazy.

Related: US and Mexico strike deal to update NAFTA

What do you think of how the Mexican president, known as AMLO, has responded so far?

President Obrador, even before he was he was sworn into office, decided that he wanted to avoid a confrontation at all costs with President Trump. In part, because his focus is on domestic public policy and he doesn't want to spend time on foreign policy and foreign affairs. He doesn't want to pick a fight with Donald Trump. He doesn't want to waste time on that, but also because I think he is convinced that by not picking a fight with the US, there will be smoother sailing for the eventual ratification of the revamped NAFTA, the USMCA.

Are you saying that you think AMLO has the political capital to respond in a more muscular fashion?

Related: How is 'new NAFTA' different? A trade expert explains

Were you expecting this?

No, certainly not. I think it caught everyone by surprise. It is a ratcheting up of tensions with Mexico and it is also a first time that one of the main paradigms of the US-Mexico relationship that has been in place for years, if not decades, which is that you don't contaminate one issue with another issue in the bilateral relationship. That is, mixing apples and pears. In this case, mixing an issue which is trade with issues that are about migration and border flows.

President Trump says he's going to be gradually increasing that tax until "the problem is remedied." Describe the hypothetical, what would 25% tariffs look like for US consumers and Mexican producers?

Horrendous. The other problem here is that we don't know what the benchmark is or what the goalposts look like. President Trump has not laid out what success means and it basically leaves it up to him to determine what success is and when he calls this a victory. We have to understand that obviously this decision is fully inserted into a bad week politically for the president, especially in a week when former Special Counsel Robert Mueller's statements have created very important political backlash for the president. This, in many ways, should be understood and should be seen as a political distraction also.