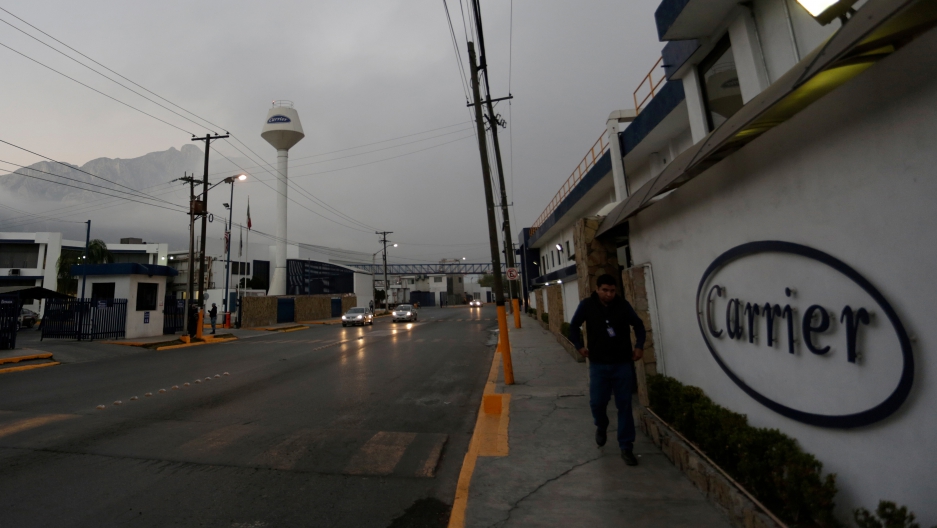 A worker walks past the Carrier plant in Santa Catarina, on the outskirts of Monterrey, Mexico. One of Donald Trump's campaign promises was to prevent further Indiana-based Carrier jobs from moving to Mexico.

Driving down the highway in Mexico’s industrial hub — the metro area of Monterrey in the northern state of Nuevo León — you see factory after factory, many with American names: John Deere, Whirlpool, Carrier.

That last one, Carrier, is the Indiana heating and cooling company that President Donald Trump repeatedly bashed on the campaign trail for its plans to relocate more jobs to Mexico. In November, then President-elect Trump helped persuade Carrier to keep 800 jobs in Indiana through a combination of pressure and tax incentives.

One Mexican taxi driver in Monterrey, Gerardo Lucio, is worried about what Trump will do next. Lucio says American companies are very important for the local economy. According to Nuevo León's authorities, 1,600 American-based companies operate in the state.

President Trump often says the country's neighbors to the south have been ripping off the US, stealing its jobs. And the president has repeatedly vowed to bring those jobs back to the United States.

Lucio says many people in the area are worried and stressed about their jobs, and people are taking Trump’s threats seriously.

As for Mexican public officials? Many say they're not worried about Trump. They’re irritated.

“It was annoying to wake up in the morning and see that before he went to take his morning piss, he already had written a Twitter against Mexico,” says Fernando Turner, Nuevo León's secretary of economic development and labor. “What’s the fixation?”

“Germany has the same surplus that Mexico has with the United States, so it was annoying,” says Turner. 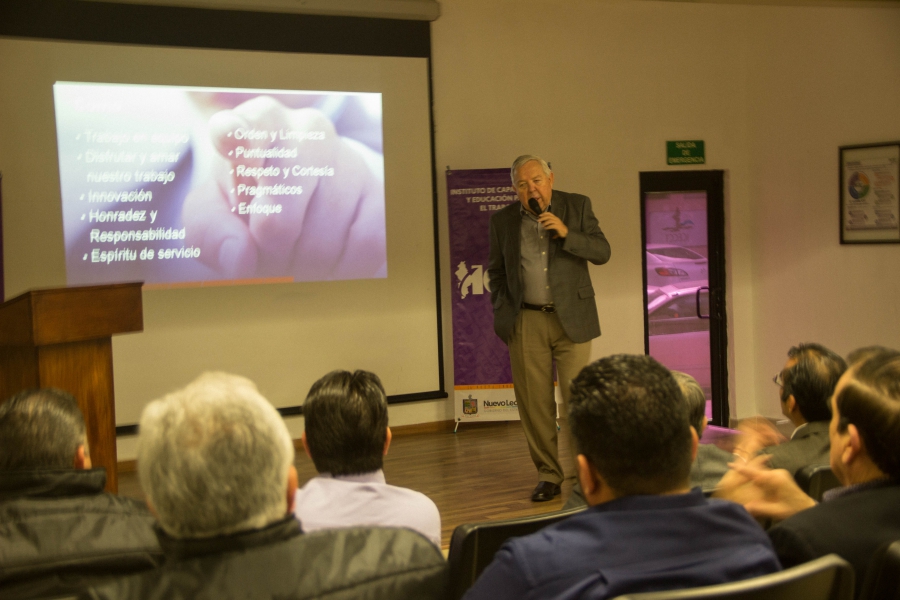 Fernando Turner is shown here, delivering a talk in Monterrey.

Trump has threatened to impose a 35-percent tax on Mexican imports. And he often vows to renegotiate or simply rip up NAFTA, the North American Free Trade Agreement, which has governed the rules of trade between the US, Mexico and Canada since 1994.

But while many Mexican officials want Trump to stop attacking their country, many also see silver linings in the president's rhetoric.

“It’s a great opportunity for Mexico,” says Julio Aguilar, the director of job training with the state government of Nuevo León.

“With my friends, I say thank God Trump is in the US,” says Aguilar. “Why? Because we are in a big dream with the US as our only partner. No! There are other countries. They want our labor, our money, our natural resources and we can make other big deals with China, with Russia, with Korea, Brazil.”

Aguilar isn’t the only one thinking like this. Hector Castillo, the mayor of Santa Catarina — a city of about 300,000 next door to Monterrey — says President Trump doesn’t really know what’s going on in his city.

In November, just as Trump was announcing 800 jobs staying in Indiana, Castillo was at another press event: this one at Carrier’s Mexican plant in Santa Catarina, touting more than 1,000 other Indiana jobs bound for the Mexican city.

The other reason, of course, is that American companies can pay Mexican workers less. The average Mexican employee at Carrier earns about $6,000 a year, according to Castillo.

Castillo says when Trump started talking about Carrier, it was free publicity for his city, and he started getting calls from across the globe, including from South Korea, the United Kingdom and Kazakhstan.

I asked Castillo: If the president were to send out a tweet tomorrow saying Santa Catarina is stealing American jobs, would you want him to do that?

Keep in mind though, Castillo is a politician. It’s his job to stand up to Trump.

Many American companies with a presence in Mexico seem afraid to do that. I reached out to several, but none agreed to an interview. I did speak with Mariano Montero, an executive with FEMSA, a major Coca-Cola bottler in Mexico. Montero says business leaders, on both sides of the border, are concerned about Trump’s rhetoric regarding US-Mexican relations.

“Of course it concerns us,” says Montero. “But business decisions are not made for four years or eight years. If the region wants to be competitive, you need to plan even for further integration.”

Montero says with Mexico’s labor market and the US knowledge economy, it just makes business sense for the two countries to grow together.

Perhaps. But that’s not a message that’s selling well in America’s manufacturing heartland. 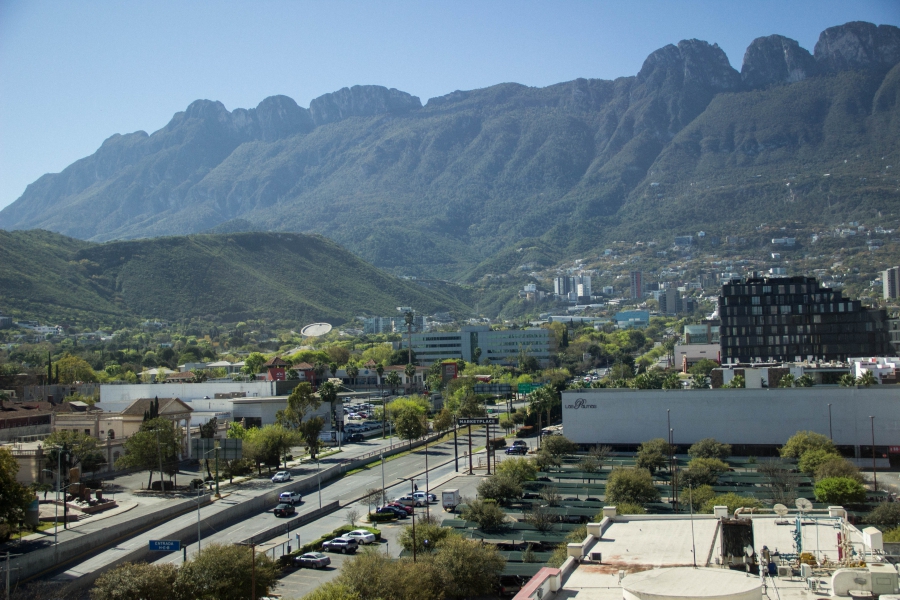 Monterrey lies north of the Sierra Madre Oriental mountain ranges. As Mexico’s commercial center, it has become one of the wealthiest cities in Latin America.