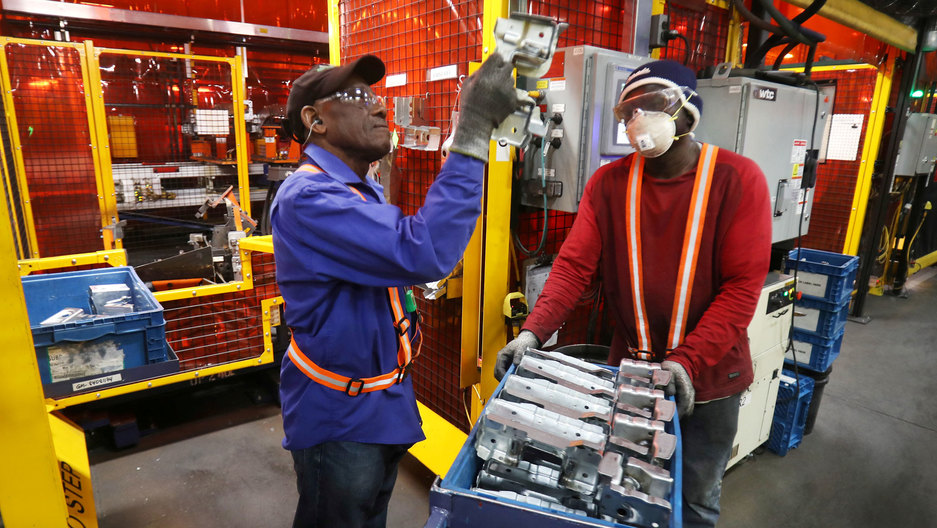 Workers examine parts for welding next to robot bay at Alfield Industries, a subsidiary of Martinrea, one of three global auto parts makers in Canada. The auto industry is one that could be particularly affected by NAFTA changes, which has created an industry where most cars built in North America contain parts from Canada, the US and Mexico.

The United States and Mexico reached a deal on Monday to change the North American Free Trade Agreement (NAFTA) and talks with Canada were expected to begin immediately, US President Donald Trump said.

"They used to call it NAFTA. We’re going to call it the United States-Mexico trade agreement. We’ll get rid of the name NAFTA," Trump told reporters. The name had a "bad connotation," Trump said.

The agreement lifted financial markets and opens the door for Canada to return to the negotiations to rework the 1994 US-Canada-Mexico trade deal. A senior US trade official said there are hopes that a final agreement can be reached by Friday.

Negotiations between the three trade partners have dragged on for more than a year, and repeated threats by Trump that he would ditch the accord have roiled financial markets, putting pressure on the Mexican peso and the Canadian dollar.

Trump said he would talk to Canadian Prime Minister Justin Trudeau soon — though he threatened that it would be easier to put tariffs on Canadian cars instead of including Canada in the agreement with Mexico.

The Mexico-US discussions focused on crafting new rules for the automotive industry, which Trump has put at the heart of his drive to rework the pact he has repeatedly described as a "disaster" for American workers.

The US-Mexico deal would require 75 percent of auto content to be made in the NAFTA region, up from the current level of 62.5 percent, a second US official said. A draft fact sheet specified the content would be made in the United States and Mexico.

The deal also would require 40 percent to 45 percent of auto content to be made by workers earning at least $16 per hour, the second official said.

"We are now inviting the Canadians in as well and hope that we can reach a fair and successful conclusion with them as well," a senior US trade official told Reuters in an interview.

"There are still issues with Canada but I think they could be resolved very quickly," the official said.

Trump is expected to send formal notice to Congress by the end of the week about his intentions to sign a new trade agreement within 90 days, which would give Mexican President Enrique Pena Nieto time to sign the deal before he leaves office, the senior US trade official said.

Pena Nieto said on Twitter he had spoken to Trudeau late on Sunday and urged Canada to return to the talks with the aim of concluding a three-nation accord "this week."

US, Mexican and Canadian stocks opened higher on Monday on optimism about a trade deal.

Mexican stocks jumped 1.4 percent to a seven-month high, while the peso firmed about 1.3 percent against the dollar, heading for its best one-day gain in more than a month.

The United States, Mexico and Canada do more than $1 trillion in trade between them every year.