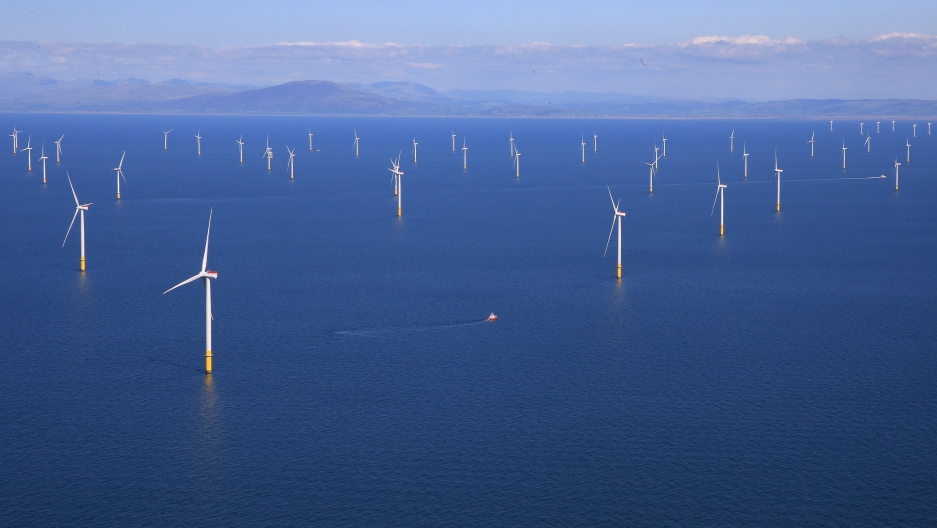 A view of the Walney Extension offshore wind farm operated by Orsted off the coast of Blackpool, Britain, Sept. 5, 2018. Offshore wind in the United Kingdom is booming, approaching 10% of the electricity supply there.

When Joseph Massi enrolled at Bristol Community College, an hour’s drive south of Boston, he chose to major in a brand new field of study — offshore wind power.

“It’s the new future. It’s where everything is going to be, the growth potential, especially in Massachusetts,” Massi says.

The Massachusetts legislature is considering bills that would commit the state to 100% renewable energy within 25 years. To achieve this, the state will need lots more solar panels and wind turbines, and people like Massi to manage, build or operate offshore turbines.

"Once it starts booming in the United States, that’s going to be where you’re want to be,” Massi says.

The federal government estimates that the coastal waters off of New Bedford, Massachusetts, are among the windiest in the nation. But here’s some bad news: Here in the US, we don’t know much about building wind turbines, out in the ocean at least. And here’s some good news: The Brits do, and they’re offering their help.

Offshore wind is booming in the United Kingdom — it’s approaching 10% of the electricity supply there.  In the US, offshore wind energy remains in its infancy — only one offshore wind farm is operational nationwide, off the coast of Rhode Island. But at least a dozen projects nationwide are in the planning stages.

Harriet Cross, the British consul general to New England, wants to share her country’s expertise to help kick-start the movement in the US. Yes, that would mean making money for British companies who could sell technology and equipment in the US. But Cross says there are also higher stakes at play.

“There’s the bigger picture: We want the world to be more green. ... We genuinely believe that clean energy is the future. So, you find that the UK is really showing global leadership on things like the Paris climate change deal and that sort of thing.”

“There’s the bigger picture: We want the world to be more green,” says Cross. “We genuinely believe that clean energy is the future. So, you find that the UK is really showing global leadership on things like the Paris climate change deal and that sort of thing.”

“We've made mistakes in the last 20 years that we've been doing this so we can share that expertise with places like New Bedford so that they can they can do it more quickly than we have,” says Cross. “They can avoid some of the pitfalls.”

Students in New Bedford will learn the technical ropes to work in offshore wind. New Bedford could use a dose of new industry. The city used to be a hub of textile manufacturing, but those days are long gone. The area has struggled economically in recent years — today, the median household income here is slightly more than half of the rest of Massachusetts.

And while the city may not be wealthy, its fishing industry is doing well — it’s the most valuable commercial fishing port in the United States. So, out on the docks, they’re a bit wary of what the British are selling.

“Trust me, there’s not one commercial fisherman on this dock, or on any other, that wants offshore wind,” says Edward Washburn, the New Bedford port director.

Related: Offshore wind in the UK is good for the climate. What about the fish?

Washburn says for the past decade, they’ve been focused on making sure that offshore wind turbines don’t impact their fishermen here.

“They’ve been commercial fishing in these areas, in some cases their families have been doing it for centuries. ... Any change to that is not welcomed. Each one of these windfarms impacts different fisheries to different extents.”

“They’ve been commercial fishing in these areas, in some cases their families have been doing it for centuries,” Washburn says. “Any change to that is not welcomed. Each one of these windfarms impacts different fisheries to different extents.” 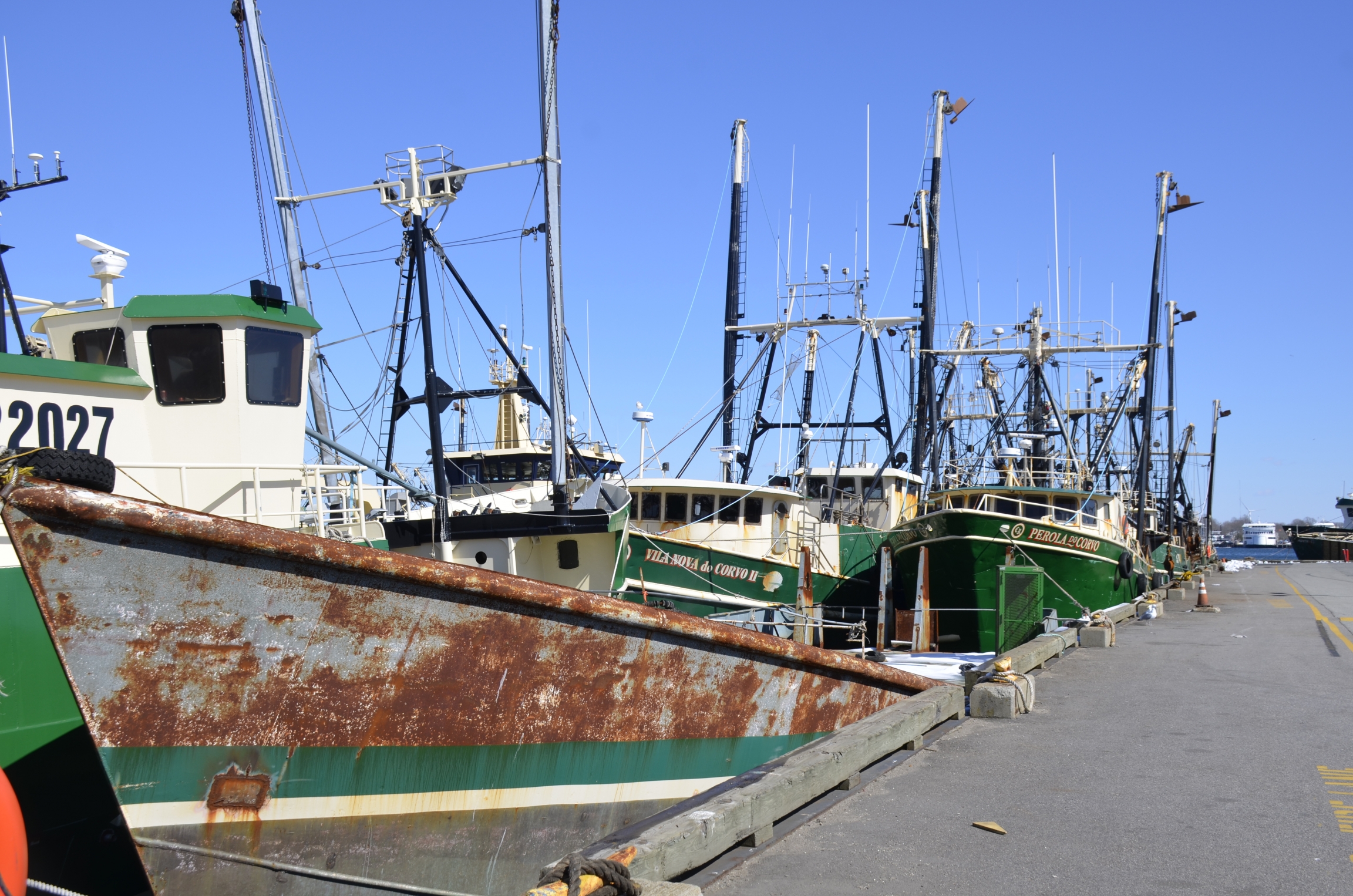 But there are trade-offs in New Bedford.

“We see the effects of climate change in full view here,” New Bedford Mayor Jon Mitchell says. “We've noticed that our beaches have eroded, but we also know that warming seas have changed the composition of the fish landings here. And we also know that ocean acidification looms as a major threat to the fishing industry.”

Wind farms — which cut our reliance on polluting fossil fuels — can help reduce those threats. They can also mean jobs. In the UK, about 8,000 people are working directly in offshore wind, helping to revive many older British manufacturing towns.

“New Bedford is very similar to places like Hull and Grimsby in the UK,” says Harriet Cross. “They’ve got a lot in common. And it means that there’s been unemployment in the past. It's places that are not as vibrant as they used to be. But that is all changing now. And it’s very satisfying to see that the UK can be a role model for places like New Bedford.”

This spring, Massachusetts regulators greenlighted plans for the nation’s largest offshore wind farm, which is set to be constructed by European companies.

The fishermen in New Bedford can see the writing on the wall. Port director Washburn says while they may be wary of new hulking windmills in their waters, they also know that fishermen need to be part of the conversation.

“To be a successful port, you need to be versatile, you need to go and get opportunities,” Washburn says. “There’s a lot of supporting businesses on this waterfront that can fuel offshore wind vessels, fuel operations and maintenance vessels for the offshore wind industry.  So we think offshore can be an opportunity that aligns with and co-exists with the commercial fishing industry.”

Even with British help, there are still plenty of barriers to offshore wind development in the US — the expense, aesthetic concerns and worries about the impacts on marine life.

But the potential is huge. Some energy experts estimate that there are enough winds blowing offshore to power the entire East Coast.

Sarah Mizes-Tan, with member station WCAI, helped with the reporting for this story.