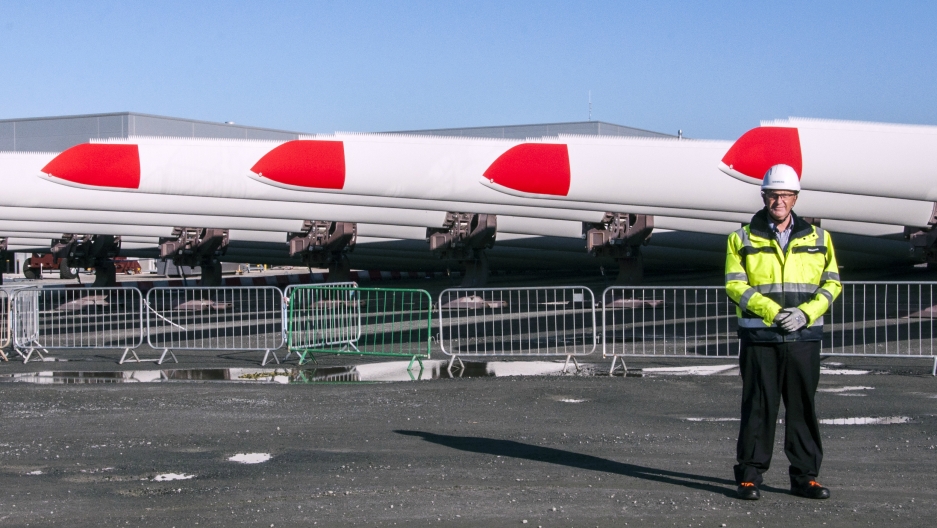 Port Operations head Barry Denness stands in front of massive, newly-minted wind turbine blades at Siemens's new plant in Hull, UK. “(They're) in service for 25 years in the North Sea, not the most hospitable of conditions," he says. "Hence the reason why they’re 30 tons.”

There are a lot of reminders of the past in the northern English city of Hull. Defunct deep-sea trawlers and cavernous warehouses recall the city’s history as the hub of England’s fishing industry.

Today, though, Hull is also a vision of the future — a factory churning out massive wind turbine blades, each the size of a giant sequoia tree, and built almost entirely by hand out of balsa wood, fiberglass and gleaming white paint.

This story is part one of our three-part series on the UK's wind power revolution.

Part 3: The UK's offshore wind boom is great for the climate. But what about the fish?

The German company Siemens recently set up shop here to supply the growing fleet of wind farms off the coast of the UK.

The blades are massive and, the company says, built to last.

“It’s a phenomenal piece of engineering, really, when you think about it,” says Barry Denness, Siemens’s director of port operations in Hull. "It’s in service for 25 years in the North Sea, not the most hospitable of conditions. Hence the reason why they’re 30 tons."

Outside the factory, dozens of freshly milled blades are laid out in rows, waiting to be shipped out to sea and mounted on turbine towers sprouting up in places like the Hornsea wind farm — a new project 24 miles off the coast that is on track to become the biggest offshore wind farm in the world when it’s finished in 2020. A second phase will single-handedly double the amount of electricity generated by offshore wind in this region, and a third phase on the drawing board would make its total capacity bigger than any coal plant in the UK.

Taken together, the size of the project is eye-popping. But energy analysts are more excited about another figure: the cost — far cheaper than almost anyone imagined possible.

Offshore wind has been notoriously expensive, but when the bids came in to build Hornsea in September, the results stunned energy analysts.

Siemens's wind turbine blades are manufactured from balsa wood and sheathed in fiberglass.

“We had an unofficial and very internal sweepstake" on guessing the price, says Emma Pinchbeck, executive director of the industry group RenewableUK. "One person got close but not that close, and at the time they made the bet, all of us thought it was crazy.”

The winning bidder promised to sell the electricity for 57.50 pounds (about $80) per megawatt — half of what the government agreed to pay for a controversial new nuclear power plant last year, and less than half the price of offshore wind just two years ago.

Pinchbeck says that kind of price drop is almost unprecedented.

“It’s unlike anything we have ever seen in energy infrastructure. You have to go to telecoms or the digital sector to find the equivalent,” she says.

“This is a low-carbon technology," Pinchbeck says. "But more importantly, it’s a really cheap way now of generating energy.”

Pinchbeck says the price drop is due to a combination of technological leaps and a clever system for administering energy subsidies that are intended to spur the development of low-carbon sources. Rather than just give flat-rate subsidies to new power plants, companies compete to build new capacity at the lowest possible level of subsidy for any given technology, whether it be traditional fossil fuel-based power plants, established renewables like solar and onshore wind, or less established technologies like offshore wind.

“The difference between the average price that comes out of the auction and the market price is the bit that the government pays,” says Pinchbeck.

And to land the winning bids, she says, companies are making big investments in large-scale operations to drive down costs.

That's paying off with plummeting prices that are bringing the cost of offshore wind power much closer to electricity from wind turbines on land and even rivaling the projected cost from new, natural gas-fired power plants.

The industry got there much faster than expected, but that kind of price drop was always the goal in the UK.

“Government is giving out those signals that offshore wind has a future,” says Benj Sykes, head of asset management and UK country manager at the Danish firm formerly known as DONG Energy, now called Ørsted. They're the world's biggest developer of offshore wind and the ones building the Hornsea wind farm off the coast of Hull.

What Sykes calls “signals” are actually those government subsidies. The UK’s been pouring money into the renewable energy business for years in hopes of mainstreaming the techologies.

Energy from offshore wind has long been notoriously expensive, especially compared to wind farms on land, but if the prices could come down, the UK would be an ideal place for offshore wind, thanks to an abundance of strong, consistent winds blowing in relatively shallow waters offshore.

"No one’s going to invest in manufacturing just for one or two projects,” says Sykes.

But with many big projects backed by government subsidies, industry dove in.

Now, says Sykes, “what we need to do ... is to build on the success. We need to drive bigger volumes into the market.” 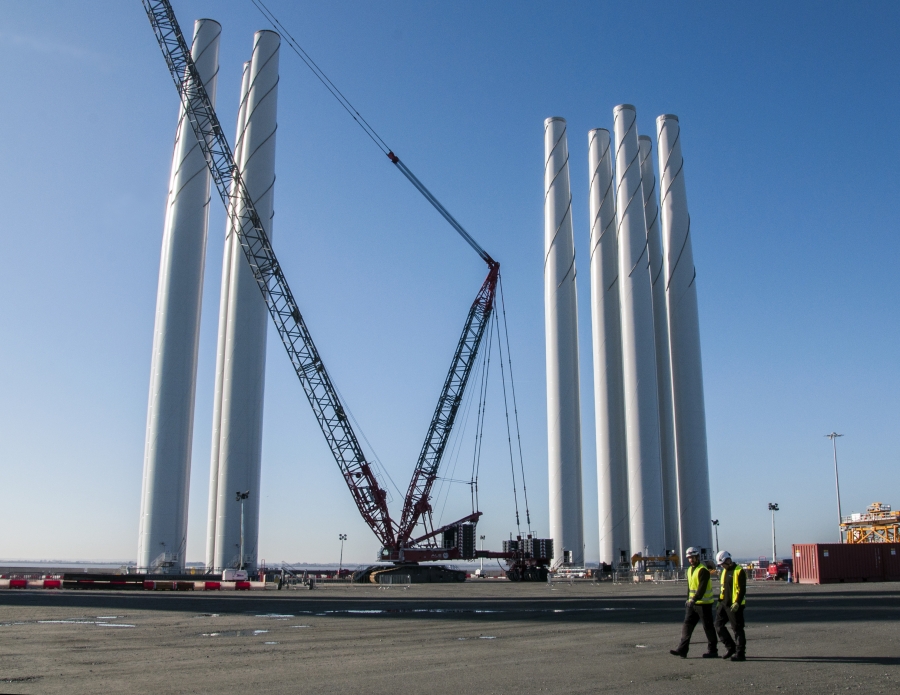 Outside the Siemens warehouse in Hull, turbine towers wait to be fitted with blades.

And energy analysts say the benefits of these public and private investments could reverberate beyond the UK, as the cost breakthroughs made here filter out to other countries.

Patrick Phelan, chair of the industry association East of England Energy Group, says the US is poised for a similar boom in offshore wind, and that British companies will help guide it, just as Danish and German companies rushed to develop England’s industry after pioneering the technology in their domestic markets.

There are critics of the subsidies, of course. They argue the offshore wind industry in the UK has become too dependent on government support, and that the current flurry of wind projects shows government subsidies aren't needed anymore. There is also concern about the possible impact of the turbines on marine ecosystems and the fishing industry.

But many people in Hull are certain of the future they’re building.

Outside the Siemens warehouse, Barry Denness gazes up at a row of skyscraper-sized towers on the docks nearby, waiting to get fitted with finished turbine blades.

Denness is the son of a trawlerman, so he remembers when Hull was a hub for deep-sea fishing. Those days are gone, he says, but the wind industry means the port is busier than it has been in years. And he thinks it's going to stay that way, at least for a while.

“This facility’s... here for 15 years to serve the industry over the long-term," Denness says. "And our next project is already in the pipeline, it’ll be even bigger still.”

And what's happening here could have an impact far beyond this old port city.

Reporting for this story was supported by the Heinrich Boell Foundation.