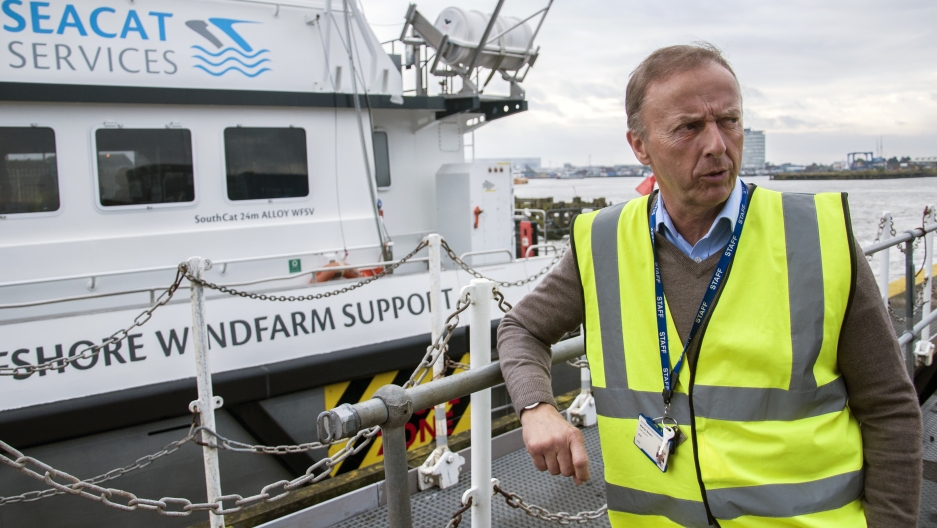 "It sounded a load of rubbish" is how Grimsby port chief Martin Boyers remembers reacting to a plan to create a maintenance hub for new offshore wind farms in the depressed city. “I didn’t know anything about renewables." But, Boyers says, "it’s turned out to be very good for us.”

Every weekday at 7 a.m. seafood wholesalers crowd into a warehouse on the docks in Grimsby, in northern England, to bid on yellow plastic tubs full of haddock, cod and plaice, touching and sometimes sniffing the product before they place their bids.

On one recent morning, the market auctioned off some 400 boxes, or about 20 tons of fish. That’s a slow day here, so the auction was over in about half an hour.

“We’ll just about break even today,” said Martyn Boyers, a former seafood wholesaler who now runs the fish market and the Grimsby port. So, Boyers said, as forklifts arrived to cart away the tubs of fish to their buyers. “In typical British style, it’s cup of tea time now.”

This story is part two of our three-part series on the UK's wind power revolution.

Part 3: The UK's offshore wind boom is great for the climate. But what about the fish?

Not so many fish, a long tea break — it’s a familiar routine here these days. Grimsby and nearby Hull used to be home to one of the largest fishing fleets in the world. But that changed starting in the 1950s. A territorial row with Iceland over the cod-rich waters north of Scotland decimated the UK’s deep-sea fishing industry, and the area never recovered. It still has one of the highest unemployment rates in the nation. 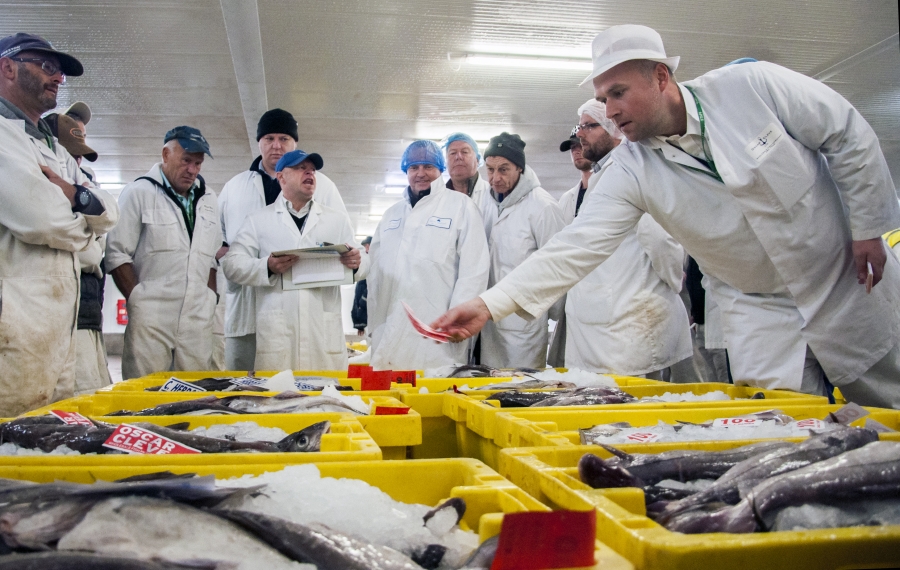 Fish auctions at the Port of Grimsby are often brief affairs these days. The local industry never recovered from a steep decline decades ago. But the offshore wind industry is now bringing thousands of new jobs to the region.
Credit:

So when Boyers and others here got a pitch to turn Grimsby into a maintenance hub for some new offshore wind farms planned nearby, they listened. Sort of.

“I didn’t know anything about renewables. I wasn’t fully conversant. And to be truthful it sounded a load of rubbish,” Boyers said. “It was one of those things that we went into thinking, ‘OK let’s give it a go,’ and it’s turned out to be very good for us.”

That was about 10 years ago. Today the waters off Grimsby are home to seven wind farms generating enough electricity for more than a million homes.

It’s part of an unprecedented boom in offshore wind power in the UK, driven by a government effort to drive down the price of the technology and cut the country’s climate pollution.

Today offshore wind provides just over 5 percent of the country’s electricity, but that’s on track to quadruple by 2030, largely thanks to one massive facility under construction about 60 miles off the coast here that’s slated to be the biggest offshore wind farm in the world.

And the boom is having big ripple effects in and around Grimsby.

Just down the street from the fish market, the Danish firm Ørsted is building a massive new facility to support the construction of the wind farm. Ørsted is the world’s biggest offshore wind developer, and its work here is transforming Grimsby’s derelict Royal Dock — so named when Prince Albert laid the first stone here in 1849 — into a new hub for offshore wind energy.

It’s a dramatic change. Until recently, says Emma Toulson, the area was full of abandoned buildings and collapsing wharfs. Toulson grew up in the area and recently took a job managing community relations for Ørsted. She says by next year, the company will have poured more than $8 billion into the region, between wind farm construction and work revamping the Royal Dock.

“It’s breathed new life back into the port,” she says, “which arguably was a bit difficult to see before wind came.”

Ørsted is promising 2,000 jobs during construction, 200 full-time jobs after that, and hundreds more slots for contractors to service the new wind farms. That would make Grimsby the world’s largest maintenance and operations hub for offshore wind farms.

The 1852 Grimsby Dock Tower is a reminder of the port's past glories. The tallest structures in the region now are offshore wind turbine towers, standing 30 stories high

Across the Humber River, the regional capital of Hull is seeing a similar boom. It’s where engineers can be found sanding massive turbine blades in a warehouse on the waterfront.

“These are big units,” says Barry Denness, the director of port operations for the German company Siemens, which set up shop here last year.

It’s no exaggeration. Each blade weighs 30 tons and is nearly 250 feet long, the size of a commercial airplane, and they’re made almost entirely by hand. So far Siemens has hired nearly 1,000 people at the new factory.

When they’re done, the blades get stacked up outside, waiting to be paired with one of the 30-story high turbine towers lined up along the river and sent out to sea. The towers are so big that they dwarf every building in Hull. You can see them from the city center, like a new skyline at the old port, and a symbol of the area’s rebirth.

“The Hull area has struggled over the last 20 years,” Denness says. “But over the last five years I think there’s been a bit of a renaissance. I think it’s put us on the map as a place where you can do business.” 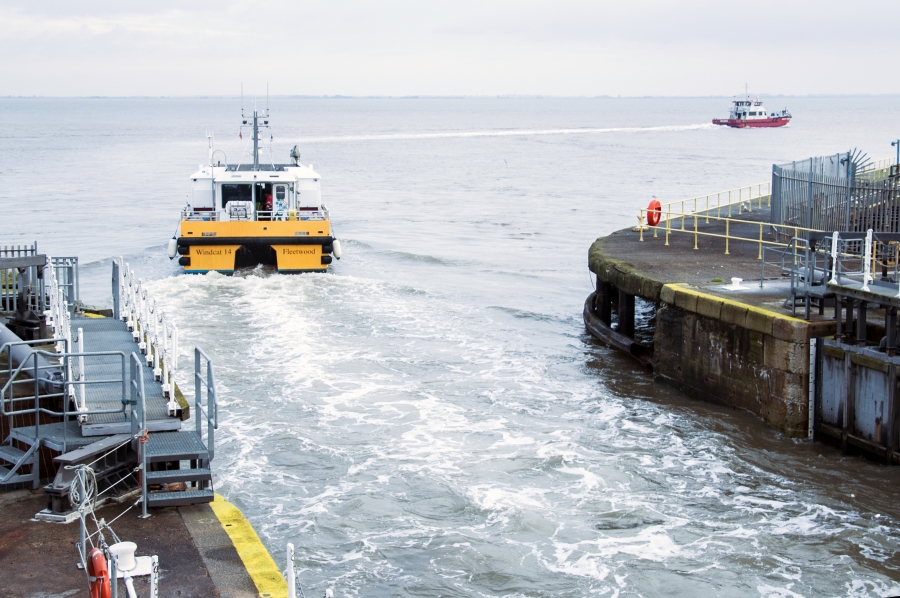 Crew Transfer Vessels (CTVs) ferry wind energy technicians out to offshore wind farms from the Port of Grimsby. The new offshore wind farms near here require daily maintenance, which has allowed the port to replace some lost business from a long decline in commercial fishing.

Of course, the history of this region has taught locals to be wary about the future. Grimsby’s docks were built to ship coal, then came fishing — both industries that rose and fell. And there are concerns that the offshore wind boom won’t last either, especially as Britain’s planned split from the European Union threatens to complicate things for foreign companies like Ørsted.

“We are in a global supply chain. It’s really important to us in terms of free movement of goods,” says Pauline Wade, director of international trade at the regional chamber of commerce. “If there is a significant change there, then that means extra cost, extra documentation, and perhaps hassle as well.”

Martin Boyers has his own concerns about the future of offshore wind. He watches a parade of boats carrying turbine technicians out to sea from a control tower overlooking the harbor lock. The hundreds of turbines off the coast of Grimsby need constant maintenance, and will for the foreseeable future.

But Boyers knows that Grimsby can’t count on its luck to last forever. After all, no one foresaw the demise of the fishing industry, and the wind business is changing fast.

If that happens, Boyers says, Grimsby might have to fall back on the business that built it.

Maybe. Climate change is putting even more pressure on many fisheries that were already shrinking. But the whole point of offshore wind is to switch to energy sources that do less harm to the climate than fossil fuels.

And for now, at least, Grimsby finds itself in the right place at the right time, for the first time in as long as most people here can remember.

Chris Bentley’s reporting was supported by the Heinrich Boell Foundation.