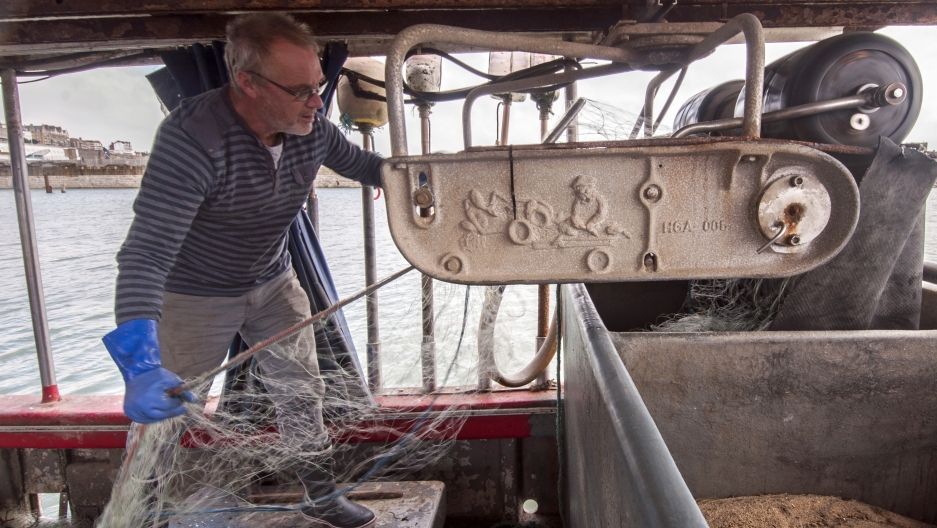 Fisherman Steve Barratt says the area just offshore of the English port of Ramsgate was a prime fishing ground until a wind farm was built there a few years ago. Now he says he has to steam for three hours to get a good catch. But scientists aren't so sure the wind farm is to blame.

On the deck of the Razorbill, docked in the English port of Ramsgate, Steve Barratt runs thousands of feet of nets through a squeaky pulley, getting ready for another long night of fishing in the North Sea.

It’s a time-worn routine for him, but it has its rewards. As they whiz by, he snags a fish still stuck in one of the nets from the night before and tosses it to the side.

Barratt will head out this night in search of more sole and other fish and on his way, he’ll pass right through a relatively new feature on the water here — the Thanet Wind Farm, 100 turbines visible from shore that have been spinning since 2010.

This story is part two of our three-part series on the UK's wind power revolution.

But he won’t stop and set his nets there.

“For some reason — I don’t know if it’s the sound, the humming, the motors — I don’t know what it is, but the fish are not in the wind farm,” he says. “It’s virtually barren apart from a few whelks and a few lobsters.” 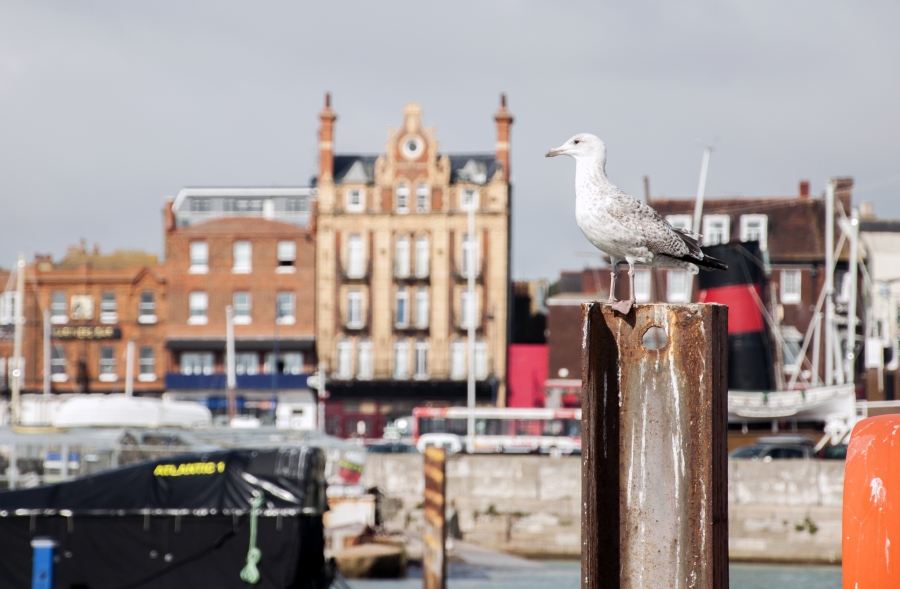 The English port of Ramsgate harbor.

Barratt says the area used to be a prime fishing ground. Now he says he’ll have to steam for three hours to get a good catch, almost all the way to the Netherlands.

Barratt is not fond of the wind farm and he’s not alone.

“You think to yourself it’ll never happen and then reality kicks in and it does,” says John Nichols, a retired fisherman and chair of the Thanet Fishermen’s Association. “And here we are with a wind farm that we don’t particularly want. If we had a choice as a fishing industry we would say no to it even today, but it’s there and we have to learn to live with it."

Fishing here has never been an easy business, but Nichols says it’s getting tougher. The size of the fishing fleet in Thanet is just half of what it was 25 years ago.

It’s not just the Thanet wind farm, Nichols says, or the others popping up around here as part of the British boom in offshore wind energy. The sea in this part of England is also getting crowded with other things as well, like undersea cables connecting the U.K. and Europe.

Then there are the effects of climate change.

“We’re also seeing a massive increase in water temperature here,” says Nichols, “and we’re not seeing the hard northeasterly and easterly winds that we used to see.”

Both of those changes could be affecting fish habitat here. Still, Nichols believes the wind farms are part of the problem.

“Even if we did have a real hard easterly breeze now, it wouldn’t filter through like it used to because of all the turbines,” he says. “They act as a breakwater at sea.”

Fishermen say that’s altered the seafloor and the tides, subtle changes that they fear are helping drive fish away.

But it’s difficult to verify what fishermen say they’re seeing here because there’s been almost no research done on fish populations in the area, before or after the wind turbines were built.

"The problem is that no proper studies were done on the commercial fishing taking place prior to the construction of [the Thanet wind farm] and certainly no studies have been specifically done on the Thames Estuary sites since construction,” says Merlin Jackson, a longtime Thanet fisherman who also acts a government liaison to fishermen in the region.

"We also have to bear in mind here that the fishing has changed over the last 15 years due to multiple factors,” Jackson says, “and it is difficult to see which one to blame."

Fisheries experts elsewhere in England have come to similar conclusions. 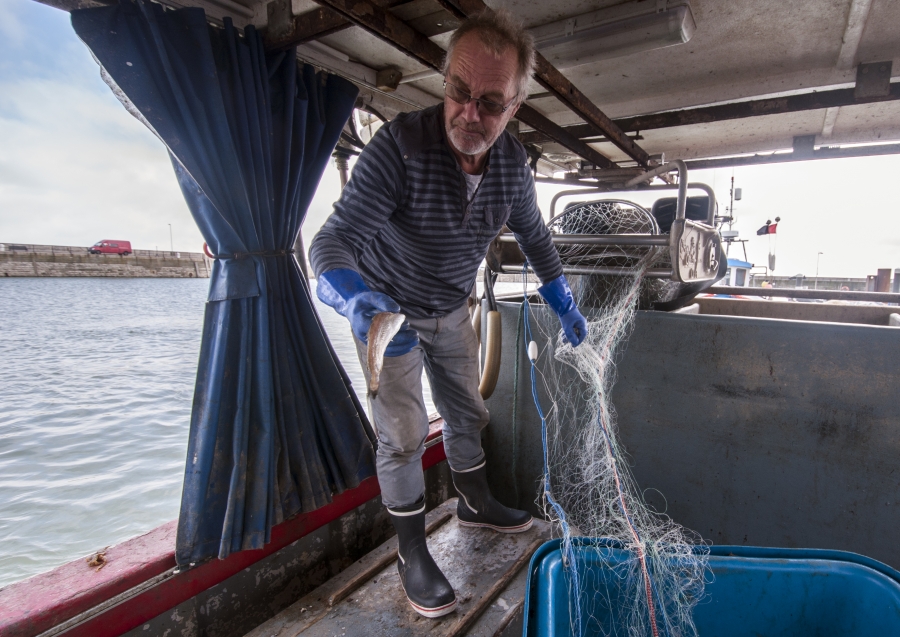 Fisherman Steve Barratt aboard his boat Razorbill in the Ramsgate harbor.

"Perhaps the biggest problem with how wind farms are [built] here is that there is generally no meaningful collection of baseline … data before construction starts,” says Mike Cohen, a marine biologist and chairman of the National Federation of Fishermen's Organisations.

But where those kinds of studies have been done, scientists say the impacts have been minor.

“In most cases, it’s been short-term,” says Helen Bailey, a professor at the University of Maryland who has studied the effects of other offshore wind farms in the U.K. and elsewhere.

Bailey says the biggest impacts are during construction.

“The process that has been of most concern is the pile driving, which is when they hammer the foundation of the turbine to the seafloor to secure it in place,” says Bailey. “That emits very, very loud sounds, and sounds travel very far underwater.”

Bailey says technologies to deaden those sounds don’t seem to help much. But she says marine creatures tend to come back just a few days after construction ends, and that in some cases, they even appear to thrive around the new turbines.

“They now had examples where they actually saw seals feeding at the turbine sites, so these seem to be acting presumably like artificial reefs and actually attracting them to the area,” Bailey says.

Jackson and Cohen agree that some marine species do seem to thrive around the wind farms, but not necessarily the ones attractive to commercial fishermen.

But like her colleagues in the UK, Bailey cautions that there haven’t been enough long-term studies done, and scientists don’t know what cumulative effects might result as more offshore wind farms are built.

For now, though, if some marine creatures are learning to adapt, some fishermen here are too.

“I’ve got used to it,” says Jason Parrott, who used to fish for Dover sole out of Ramsgate with his wife, Dawn. Parrott still works on the sea here, but he’s got a new job ferrying maintenance technicians out to service the wind turbines. 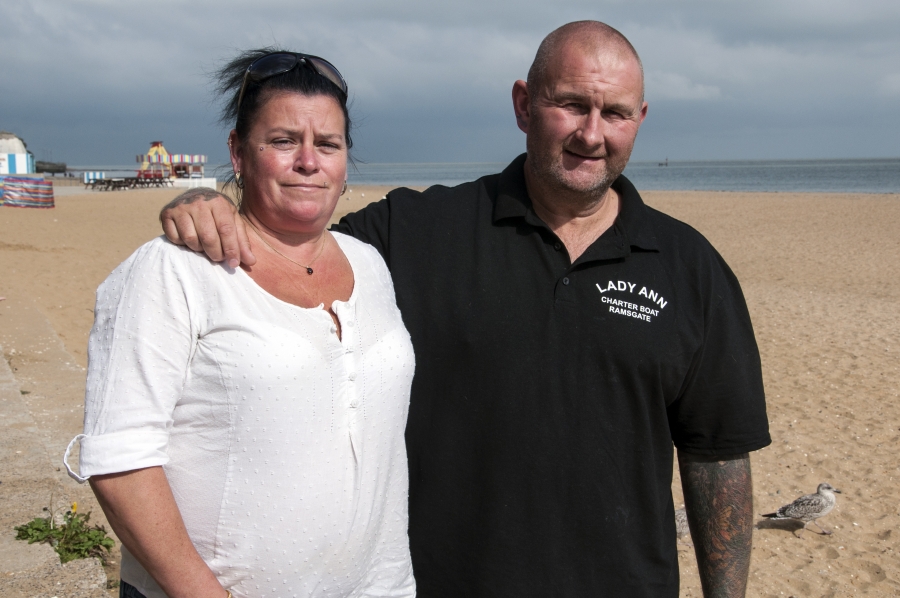 Dawn and Jason Parrott used to fish for a living. Now Jason is employed by a wind energy company to run technicians out to offshore wind farms. The pay's good and stability is better than being a fisherman, but he says he misses the thrill.

“If you ask me whether I love it, I couldn’t answer that, not like I used to love the fishing,” Parrott says. “But it pays the bills and it’s enjoyable.”

“You’re just there on your own, you haven’t got a clue what’s coming up in the net,” she says. “Every day’s different, every day.”

Others here have taken advantage of a fund set up to compensate for lost fishing days because of construction at sea.

The Thanet Fishermen’s Association spent some of that money on a marine fueling pump.

“We’re like a service station on the motorway,” says Tom Brown, a retired fisherman. Ironically, he says the biggest customers are those maintenance boats for the wind farms.

“They’ll come in here overnight, fill up with fuel and away they go again,” he says, “So the fishermen get a little payment from the wind farms.”

For his part, Steve Barratt in Ramsgate is sticking it out with just fishing, and trying to take all the changes here in stride.

“I mean if somebody said to me 20 years ago, over half of these fishing boats are going to be gone and there’s going to 15 or 20 big catamarans servicing wind farms off here, I’d have said, ‘yeah alright,’ and laughed,” he says. “And look what’s happened.”

Barratt’s nearing retirement age and says he sees the future closing in on the few inshore fishermen left in the U.K. But he says no matter how many wind farms they put up around here, he’ll keep steaming the Razorbill through them to find fish, for as long as he can.

This reporting was supported by the Heinrich Boell Foundation.