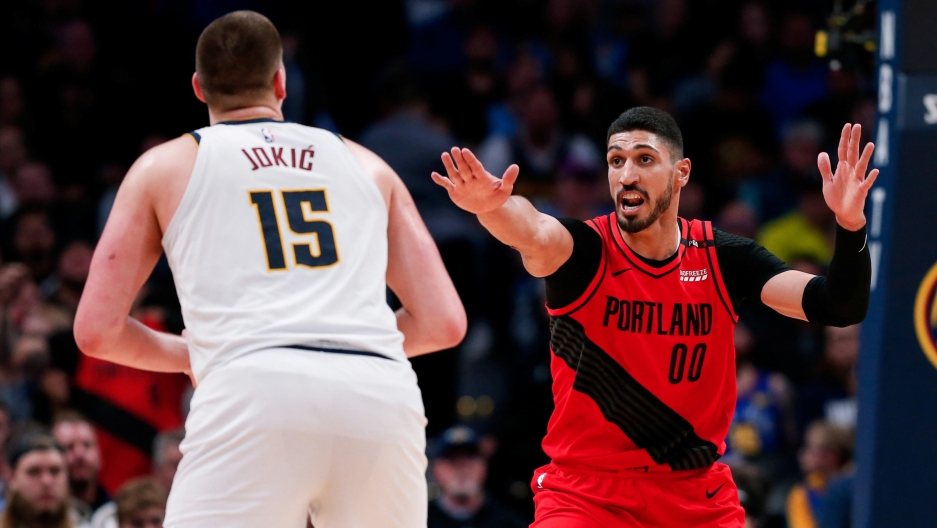 Portland Trail Blazers center Enes Kanter (00) defends Denver Nuggets center Nikola Jokic (15) in the second quarter in game two of the second round of the 2019 NBA Playoffs at the Pepsi Center.

Turkish basketball player Enes Kanter's Portland Trail Blazers reached the NBA's Western Conference finals, which start on Tuesday, but for the first time, the series will not be widely televised in Turkey, where he is accused of having terrorist links.

Kanter denies any terrorist links. He has been an outspoken critic of Turkish President Tayyip Erdoğan and describes himself as a close ally of US-based cleric Fethullah Gulen, who is blamed by Ankara for a failed coup in 2016. Gulen has denied involvement.

S Sport, the main TV broadcaster of National Basketball Association (NBA) games in Turkey, will not show the conference final between the Blazers and defending champion Golden State Warriors, the company and two of its commentators confirmed on Tuesday.

Turkey's broadcasters have ignored Kanter's games since he was indicted last year by a Turkish court. That includes Sunday, when he scored 12 points and grabbed 13 rebounds in a four-point Blazers victory over the Denver Nuggets.

The victory sent Portland to the best-of-seven-games conference final, one step from the league final, which would also be banned if Kanter is playing. The full NBA playoffs have been televised in Turkey since broadcasts began in the 1990s.

Fans in Turkey can still see the games through the paid NBA TV cable option and an online service.

An executive at S Sport, which is widely available on Turkish cable, characterized this as an agreement with NBA TV and confirmed it would only broadcast the Eastern Conference final between the Toronto Raptors and Milwaukee Bucks.

The NBA did not immediately comment on whether it would reconsider its contract with S Sport given the partial blackout, which comes as it seeks to expand business beyond North America.

Basketball's popularity is second only to soccer among Turkey's 82 million people.

"It is mind-blowing that a conference final will not be broadcast in Turkey," said Mete Aktas, a well-known Turkish NBA commentator and former chief editor of NBA Turkey magazine.

In a tweet he later deleted, another S Sport commentator, Orkun Colakoglu, said on Tuesday the games on NBA TV would not have Turkish commentary, and added he was hurt that he would not be able to present the games.

"The NBPA fully supports our players using their platforms to stand up for their beliefs and the principles they support. We stand with Enes," the NBPA said in a statement.

Kanter posted a Mother's Day video on Twitter and asked fans to help it reach his mother, since the Turkish government blocks his social media accounts.

Kanter's family cannot leave Turkey after their passports were revoked over Kanter's purported ties to Gulen.

"We have a very important game today. I know that you can't even watch my games, but please keep me and my teammates, my coaches in your prayers," Kanter said. "Just be proud of your son because your son is sacrificing everything to stand tall for human rights, democracy and freedom."

Ece Toksabay and Tuvan Gumrukcu of Reuters reported from Ankara.