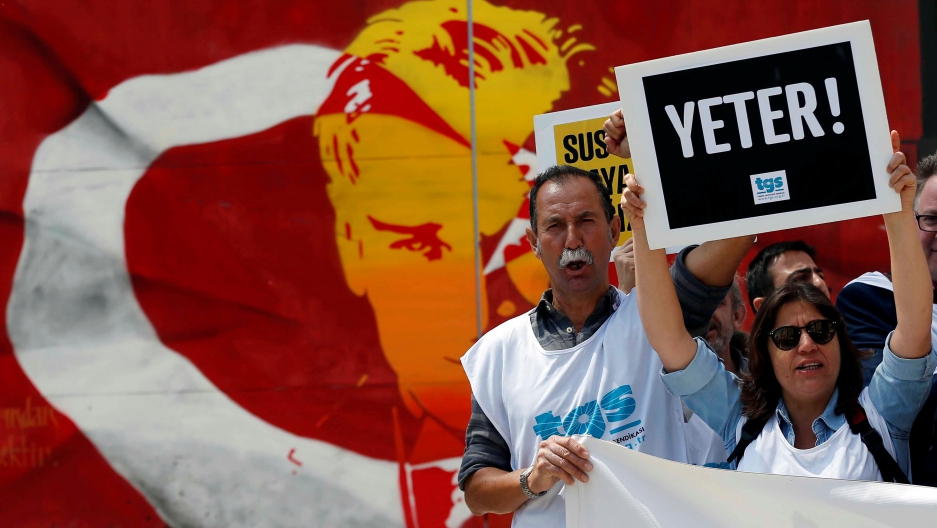 Members of the Journalists Union of Turkey (TGS) shout slogans during a demonstration to mark World Press Freedom Day in central Istanbul, Turkey, May 3, 2017. The placard reads: "Enough!"

Ten months in prison have provided Ahmet Altan with plenty of time to pore over the evidence meant to link him and his brother Mehmet to a plot aiming to overthrow the Turkish government.

His work as a journalist aside, he eventually concluded, the state’s proof rested on a single assertion.

The Altan brothers, a pair of prominent columnists who have been held in pretrial detention since their arrest in September, are among the 150 journalists and writers jailed in Turkey following a failed coup attempt last summer.

Together with Nazli Ilicak, a veteran journalist and commentator, the brothers are accused of complicity in the coup and acting on behalf of a terrorist organization — charges they deny. They each face three aggravated life sentences plus another 15 years in prison.

State prosecutors, on the other hand, claim the brothers were sending “subliminal messages” in a television show hosted by Ilicak, which aired the day before the attempted coup. On the program, the journalists had criticized President Recep Tayyip Erdogan, and Mehmet Altan had commented on Turkey’s long history of military coups.

This, prosecutors say, is proof that they knew of the plot that would unfold the following night, during which a faction of the military took over bridges and airports, bombed parliament and killed more than 240 people.

After the coup, the state arrested thousands of civil servants and fired many more, arguing they had links to the coup’s supposed mastermind, the Pennsylvania-based imam Fethullah Gülen. Soon, however, the purge spread to include academics, writers, journalists, politicians and critics of any affiliation. 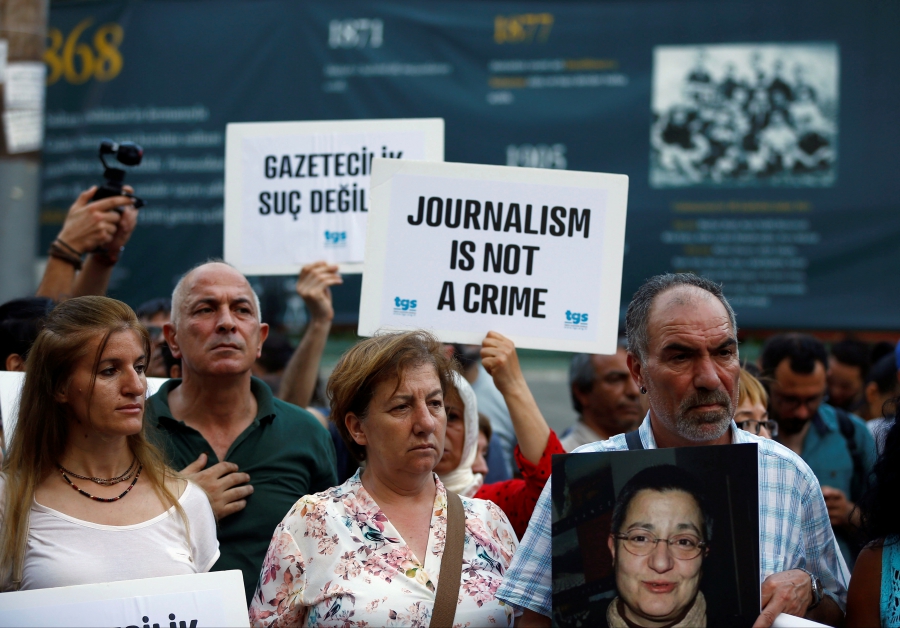 Demonstrators shout slogans during a protest against the arrest of three prominent activists for press freedom, in central Istanbul, Turkey, June 21, 2016.

Rights groups have urged Turkey to release all journalists to little avail. Erdogan and his ministers have repeatedly claimed that there are no journalists in prison — at least not for their reporting.

“Only two of the 177 people in prison who declared their profession to be journalism have yellow press cards,” Erdogan said earlier this month, referring to the government-issued press accreditation, which critical and Kurdish journalists are often denied.

“One of these 177 is in prison for murder, while the rest are there because of their ties to terrorist organizations,” he said.

Turkey has a long history of putting journalism on trial, imprisoning reporters under successive military regimes as well as under Erdogan’s AKP government. In the past decade, Erdogan himself has sued thousands of critics for insulting him, among them many journalists.

The precise number of journalists currently in Turkish prisons varies: Most press freedom groups say that at least 150 editors, reporters and columnists are behind bars, while some put the number above 200.

Either estimate crowns Turkey the world’s leading jailer of journalists. According to the Committee to Protect Journalists, Turkey accounted for a third of all journalists imprisoned worldwide in 2016.

Most of those journalists were arrested after the coup attempt, and are awaiting trial. Few have made an appearance before the court. Many have yet to learn the exact charges against them. As of June, no journalist charged with links to the coup plotters has been convicted of a crime.

Many more editors and reporters have found themselves unemployed. An estimated 2,500 media workers lost their jobs since the attempted coup as more than 160 media outlets were shuttered by decree.

Besides media conglomerates linked to Gülen, Kurdish outlets have also been hit hard. They, at least, are used to crackdowns: In the past, Kurdish journalists in particular often ended up on trial for “terror propaganda” if seen to write or speak sympathetically about the militant Kurdistan Workers’ Party (PKK), which has fought the Turkish state for decades.

But since the failed coup, virtually every journalist arrested has been accused of terror-related crimes, as the government has declared Gülen’s opaque movement a terrorist organization — meaning that anyone accused of even the slightest links to the group or the coup attempt will face terror charges.

The evidence against them is often paper-thin, or based on their work for media organizations associated with Gülen’s movement. The indictments against many journalists, including the Altan brothers and Nazli Ilicak, include their professional contacts and correspondence with suspected Gülen supporters as proof of their guilt.

“All my relationships with the people that you mention were within the framework of my job as a journalist,” Ilicak said in her defense statement last Monday, her voice rising in anger. At the time she spoke with them, she added, “they were not yet declared members of a terrorist organization.”

“Only two of the 177 people in prison who declared their profession to be journalism have yellow press cards. One of these 177 is in prison for murder, while the rest are there because of their ties to terrorist organizations." — Turkish President Recep Tayyip Erdogan

The courtroom’s public gallery was crowded with press freedom advocates, journalists and relatives last week. Together with the Altan brothers and Ilicak, more than a dozen other journalists were on trial, albeit on slightly different charges. The majority were fugitives, tried in absentia.

Few observers thought they would be granted a fair trial. Turkey’s courts, weakened by the sacking of some 4,000 judges and prosecutors, have gradually lost their independence.

Judges who rule in favor of defendants charged with links to the coup attempt risk losing their jobs. Earlier this year, a court ordered the release of several journalists — a decision that was swiftly reversed, followed by the suspension of the judges involved.

Observers were therefore not surprised when, on Friday evening, the court decided to keep Ilicak and the Altan brothers in pretrial detention until their trial resumes in September.

The judge made no other comment before adjourning, but his decision to keep the journalists in jail signaled that he sided with the prosecutor — ruling that bail could not be granted given “the existence of a flight risk” and “strong suspicion of a crime having been committed.”