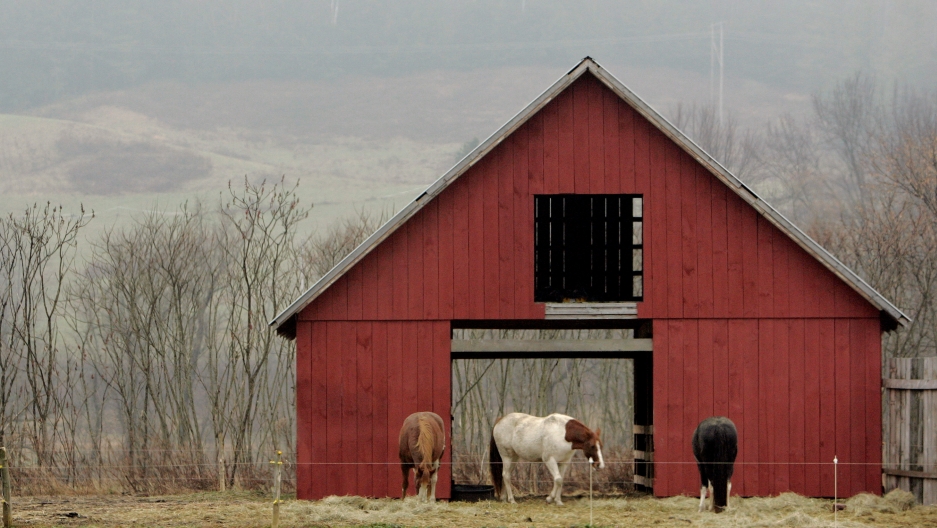 Bucolic Vermont is making an attempt to attract a more diverse workforce. Here, horses feed outside their barn on a foggy day in Waterbury, Vermont, Nov. 28, 2006.

Forty years ago, Curtiss Reed Jr. came to Vermont for a ski vacation and got stuck in a storm. He had to sleep in a Dunkin Donuts for two nights before he could make it to a friend’s house. That gave him plenty of time to take in Vermont’s natural beauty.

“I spent three weeks skiing, eating, drinking and decided this was paradise,” said Reed, who’s a consultant with the Vermont Partnership for Fairness and Diversity. “Six months later, I moved here.”

But since then, Reed has seen downtown stores close in towns across the state. Taxes have gone up. Wages for many have stagnated. Reed said that’s because Vermont has only tried to attract one kind of new resident.

“Vermont's marketing strategy for decades was white, heterosexual males with family incomes of $120,000 or more. ... That population is shrinking.”

“Vermont's marketing strategy for decades was white, heterosexual males with family incomes of $120,000 or more,” he said. “That population is shrinking.”

Despite President Donald Trump saying “our country is full” earlier this month during a visit to the US southern border, Reed says if Vermont wants to improve its economy, it needs to bring in more people. But the state has two problems: It doesn’t have enough people to do the jobs it already has, and it doesn’t know how to attract people of a different demographic from Vermont’s current population, which is nearly 95% white.

Under the Trump administration’s policies, there are fewer refugees, immigrants and temporary visa workers coming into the state. Joan Goldstein, commissioner of the Vermont Department of Economic Development, said the race is on; states are competing to attract new residents.

“I know that sounds very mercenary but we're in a competitive marketplace,” she said.

She said Vermont has made a big change in approach: Instead of trying to attract businesses to the state, they’re appealing directly to individuals.

“Other states have asked us how we did this because they're also interested in some of the same types of tactics,” Goldstein said. “So clearly, even though it's a departure, it's probably going to be more mainstream soon.”

This year Vermont began handing out $10,000 dollars for certain remote workers who move to the state.

This year Vermont began handing out $10,000 dollars for certain remote workers who move to the state.

“There was significant interest from outside the US on the initial publicity hit we had,” she said. “I would say close to 25% of people coming in with inquiries were from other countries.”

But so far none of the 26 people approved for the grant have been refugees or people who moved from another country. That may be because there are barriers for immigrants who want to work in the state. Chris Winters, the deputy secretary of state, said it’s been difficult for people to get their credentials from elsewhere to count in Vermont.

“When you go beyond protecting the public you start unfairly keeping people out of professions who are otherwise qualified to be there,” he said. “So, we can really do a lot still in Vermont to improve access to our workforce.”

This month the Vermont legislature passed a bill that would make it easier for many immigrants to transfer their qualifications so they can get certified for jobs in the state. The governor is expected to sign it. The state is also making other moves, like hiring a chief racial equity and diversity officer.

Winters hopes those measures will help to attract, among others, nearby Canada’s many new, diverse immigrants to work in Vermont. He said diversity is key to keeping millennials in the state — and points to his own daughter, who’s leaving Vermont for college because she doesn’t feel like she’s met enough different kinds of people.

“I think it's really unfortunate that we've heard statements recently like ‘America is full,’ ‘there's no more room at the inn.' ... I can tell you there's plenty of room in Vermont.”

“I think it's really unfortunate that we've heard statements recently like ‘America is full,’ ‘there's no more room at the inn,’” Winters said. “I can tell you there's plenty of room in Vermont.”

But Marita Canedo, with the group Migrant Justice in Burlington, said Vermont still has a long way to go to appear welcoming to immigrants and people of color.

“If you’re going to promote a state as ‘The Green Mountain,’ beautiful landscape, you have to take into account the people that are there already, and struggling, which is the dairy industry,” said Canedo.

Many people who work in Vermont’s dairy industry are undocumented. Cruz Alberto Sánchez-Pérez came to Vermont from Mexico in 2015 to join two of his brothers working on dairy farms. He said they were paid less than minimum wage and didn’t get a day off until they organized to demand better wages and benefits.

It’s still a tense environment for people who look like him, Sánchez-Pérez said, even though he’s just won asylum in the US. In addition to Immigration and Customs Enforcement, US Border Patrol has jurisdiction 100 miles from the federal border, which includes much of Vermont, and is on alert for undocumented people trying to cross into Canada.

Vermont has also had some notable race incidents.

“Over the last three or four years, we've had a number of unfortunate incidents,” said Reed. 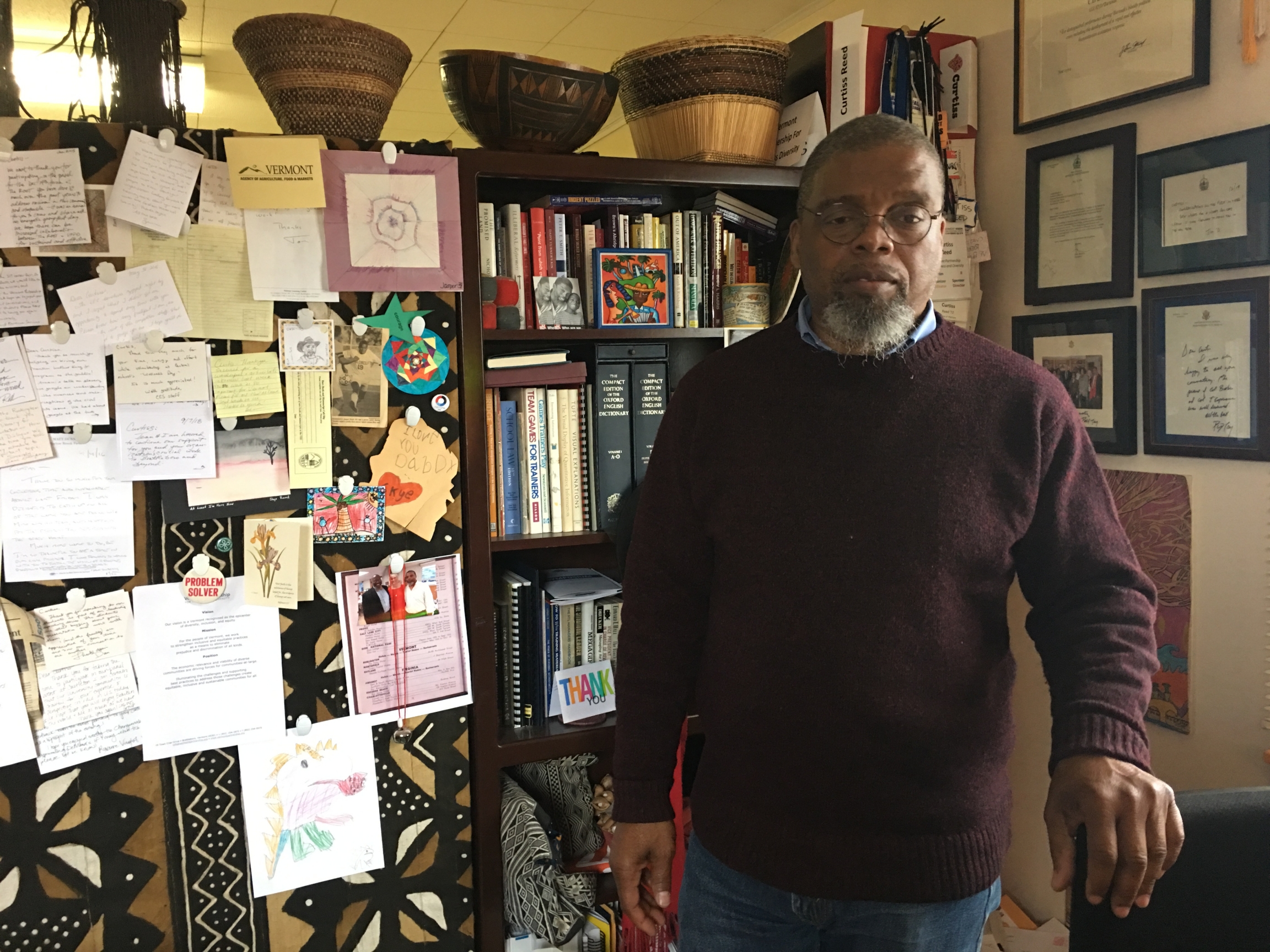 Curtiss Reed Jr., president of the CRJ Consulting Group and executive director of Vermont Partnership for Fairness and Diversity, does inclusion, bias and equity training for state and local municipalities.

In 2017, the city of Rutland’s incumbent mayor campaigned on bringing in Syrian refugees to reinvigorate the local economy. The pushback he faced drew national attention and he lost in what was seen at the time as a referendum on refugee resettlement. Last year, Kiah Morris, Vermont's only female African American state senator, resigned because her family was being harassed. In Stowe, racial slurs were yelled at counselors and kids of color at a camp.

“There any number of places around the state that have had these incidents,” Reed said. “And in the absence of a robust response, what's left in people's minds is, ‘Eh. Vermont. I believe the SNL skit,’” he said, referring to a "Saturday Night Live" skit that aired last year that parodied a meeting of Confederate supporters.

“If they’re going to keep coming here, we’re going to go someplace else,” the character leading the meeting in the skit says. “Our own place for our own people. No immigrants, no minorities. An agrarian community where everyone lives in harmony because every single person is white. Yes, sir?”

“Yeah, I know that place — that sounds like Vermont,” says special guest Adam Driver, in character. The audience laughs.

To dispel that image of Vermont, Reed said the state and local governments have to actively campaign against it by appealing specifically to immigrants and communities of color — because not all of them get information the same way as white people. Vermont could advertise through social media like Black Twitter. It could advertise in Spanish.

“It starts with an invite. ... And if you’re inviting only to a shrinking population, then the net result of that is that your economic growth and prosperity is in jeopardy.”

“It starts with an invite,” Reed says. “And if you’re inviting only to a shrinking population, then the net result of that is that your economic growth and prosperity is in jeopardy.”

Unfortunately, Reed said, the natural beauty that drew him to Vermont isn’t enough to sustain its economy; the state will also have to learn to embrace change.